PerfectStorm. I recall one reviewer praising PS Audio’s MKII PerfectWave DAC with not only superlatives but by claiming that it contrasted the MKI as sounding ‘broken’. Hmmmm – not so sure I agree there. The MKII PWD is better than the original model, yes, but it doesn’t render the MKI redundant. If you own one, you should continue to enjoy it – it’s still a great DAC! Trashing an older model isn’t a way to win people over – it alienates them through fear of missing out.

Audiophile anxiety is then amplified further by questions like, “What if PS Audio introduce a MKIII?”. Well, that moment has arrived.  Get ready for some serious FOMO.

The DirectStream press release is subtitled: “PS Audio’s DirectStream DAC Exposes Major PCM Cover-up”. Dramatic stuff! The release also makes some fairly bold claims about this new model’s ability to set PCM free, to dig up hitherto unexposed details and (spatial) cues from your existing digital audio library. Whilst such claims remain unverifiable until I get my hands on a review unit – yes, Paul McGowan is sending me one – I heartily endorse this focus on existing PCM content, especially ye olde Redbook. Ironically, PS Audio are using DSD to do it.

“DirectStream is the result of lead designer Ted Smith’s decade-long obsession with DSD, the first in a field of one: a DAC so radical that it will show how most other DACs on the market are…well, broken. How so?”

Broken huh? Who says Americans don’t ‘get’ irony?  Of course they do.

All inputs on the DirectStream DAC are first converted to 10 x DSD after which a field programmable gate array (FPGA) processes the signal to 1 bit DSD. Apparently, a FPGA was chosen for its ability to dissipate large amounts of heat whilst handling intensive levels of signal processing. 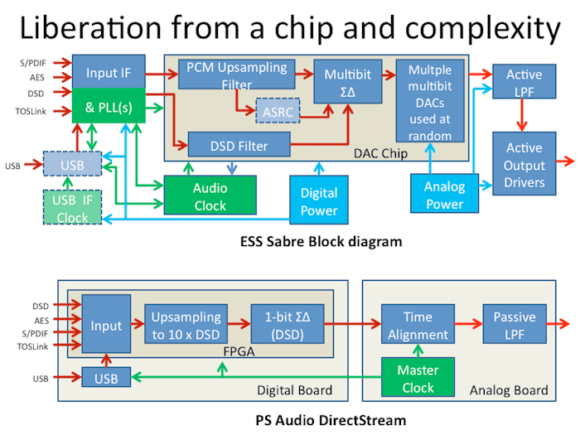 “The choice of a FPGA over a DAC chip was easy. FPGA’s allow as much or little full width math to be used as we need. Unlike typical small DAC chips, we’re not limited by the heat needed for intensive upsampling and other processing duties. We use more power and physical area to dissipate heat without conflicting with other functions on the board, most of all the analog output.

The Xilinx Spartan 6 FPGA allows complete freedom of processing power and clock choices: our design runs the input processing at 170MHz, the oversampling at 56MHz, and the output at 5.6MHz.”

With data then in bitstream format a discrete conversion is applied. No traditional DAC chips are used.

You can see Ted Smith discussing Why Jitter Matters here:

…and his DirectStream white paper can be found here.

The PerfectWave DirectStream will sell for US$5995 and will ship in April 2014.  Australian pricing TBA.

PS Audio will provide an upgrade program for all PerfectWave DAC owners to convert their existing units to the new DirectStream standard…so that they no longer sound ‘broken’. 😉