I always keep a pair of Usher S-520 loudspeakers to hand, pressing them into service every few months to keep it honest. Available via eBay and other retail outlets for AU$320-350 you get a high quality speaker for relatively little money; although not as refined as the recently reviewed GoldenEar Aon 2 they’re far better at dealing the low end heft of Orbital’s Middle Of Nowhere and they image almost as well as ProAc’s Tablette Reference 8. All up, they’re an everyman speaker, ideally suited to hifi newbies – folks seeking ‘first system’ recommendations.

It seems odd that I’d not yet paired the Usher standmounts with the pinnacle of everyman integrated amplifiers, the NAD 3020. Mine is the later-issued ‘i’ revision, the first to come with proper speaker binding posts. This vintage unit also packs a more than satisfactory sounding MM phono input and two line-level inputs. On the front panel: balance and tone controls and a 1/4″ headphone socket. And that’s yr lot. 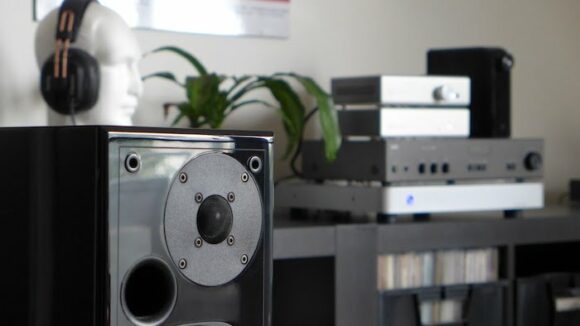 This (now vintage) piece was manufactured in a time before remote controls became an expected standard. Even so, the 3020 really put the then UK-owned and run New Acoustic Dimension (NAD) on the map. Their marketing department pitched it to the public sans scene-snobbery and keenly priced. It sold by the truckload and so the original 3020 subsequently became one of the most popular hifi components of all time.

Ordinarily I’d recommend at least 80 wpc (into 8 Ohms) to satisfactorily driver the Usher S-520 – especially if you’re looking at an AV receiver – but the NAD 3020i’s high current delivery shows just how misleading the numbers game can be. I’ve had this very amplifier driving the 4 Ohm Magnepan MMG with aplomb and so it’ll come as little surprise that the 3020i makes for a terrific match with the Taiwanese standmounts. 9pm on the volume dial netted an ~80db SPL at the listening position. Quantity secured, what about quality?

Obviously, the NAD 3020i doesn’t come with a built-in DAC so Schiit’s Bifrost Uber (w/ Gen 2 USB – US$519) was called upon to decode a 24-bit version of MGMT’s eponymous third album, the psychedelic vibe of which was communicated crisply with good definition and detail. The NAD/Schiit combo underscored the S-520’s ability to clear space for proper vocal enunciation amid David Fridmann’s tendency towards a cacophonous, percussive production style. Tonal weight and forward drive were both A-OK and I caught only very occasional hints of a steely treble that reliably shows up when the Ushers find themselves underpowered. That said, the NAD 3020i + Usher S-520 pairing might not sit well with listeners who air-shred to thin-sounding rock records like Guns ‘n’ Roses Appetite For Destruction. Thankfully A Place To Bury Strangers’ industrial guitar work (think: early JAMC x Joy Division) stays on the right side of bearable. 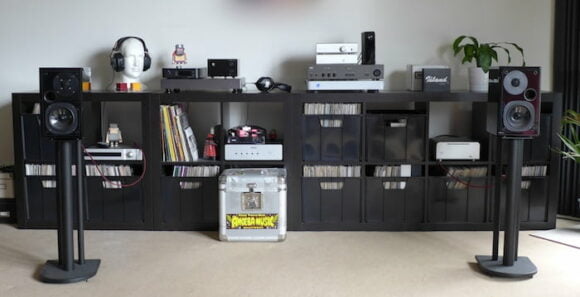 If you’ve a digital front end in need of caffeination or a turntable setup that displays warmish tendencies then the NAD/Usher pairing could suit ya. Just don’t call it synergy. Synergy isn’t some mystical force, it’s the result of levelling the sonic see-saw, behind which sit test bench measurements (that provide us with the whys and wherefores should we need them). In the context of this setup’s total cost (~AU$1200), only more seasoned audiophiles would find nits to pick, as I did above. Newcomers would find themselves in hog heaven.

The vintage NAD can’t perform miracles though. Some months ago I spent an afternoon with the 3020i powering KEF’s LS50. I removed the U-connectors that join power and pre stages (found on the back) and ran DAC direct into the NAD’s ‘power’ RCA input . The old girl sounded somewhat flat and lifeless next to Wyred4Sound’s mINTy fresh integrated (US$1499) and it was completely outclassed in EVERY respect by the same Californian manufacturer’s mAMP monoblocks (US$1900/pair). 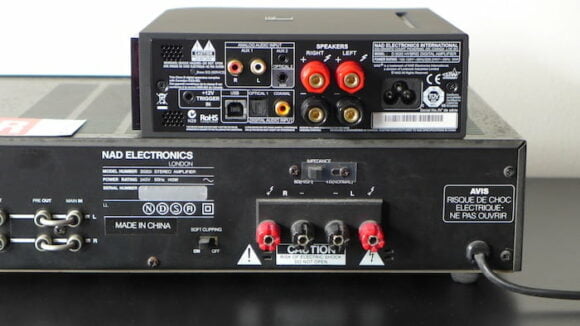 ‘D’ is for digital. Over thirty years since the 3020’s debut, NAD is now owned and run by the Canada-headquartered Lenbrook Group (who also look after the equally venerable PSB loudspeakers). To mark four decades of NAD comes a new 3020 – Lenbrook have re-imagined it for 21st century boys. Internally, the D 3020 is nothing like the original Class A/B design. The D prefix points us to what lies beneath. Each digital input flows through DAC and then Class D output stage (designed by Hypex). Analogue input/s (obviously) do not require D/A conversion.

Hands on. The aesthetic shift from old to new could not be more radical. Designed to sit upright, the NAD D 3020 comes on more like a network device than a piece of hifi equipment. The volume knob feels every bit as plasticky as it looks and my review unit saw it jiggle (a little) in its socket. Build quality/materials might be one area where NAD have cut corners to cut costs – it retails for a super-keen AU$699. The touch sensitive power and source selection on top respond better to gentle caress than firm press. Going hands off: there’s a fairly tidy remote – finished in the same rubberised-plastic found on the side walls of the main unit – which I much preferred for switching power on/off, moving volume up/down and source selection. The clover leaf power socket on the rear holds deluxe power cables at arms length. 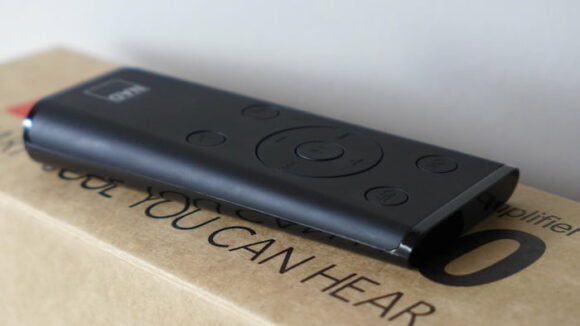 At the core of this new model are three digital inputs: coaxial, optical and USB. Audirvana+ confirmed the absence of sample rate holes. The D 3020’s asynchronous USB handles 44.1kHz, 48kHz, 88.2kHz and 96kHz. S/PDIF inputs play to the higher ceiling of 24bit/192kHz. Elsewhere, NAD have traded in the original’s phono stage for aptX Bluetooth streaming – ironic given the resurgence of vinyl in recent times – but they hold fast to a single* analogue input for off-board phono stages and external DACs. Enter once more the Schiit Bifrost Uber D/A converter. High noon chimed for a 3020i vs D 3020 standoff over analogue inputs. 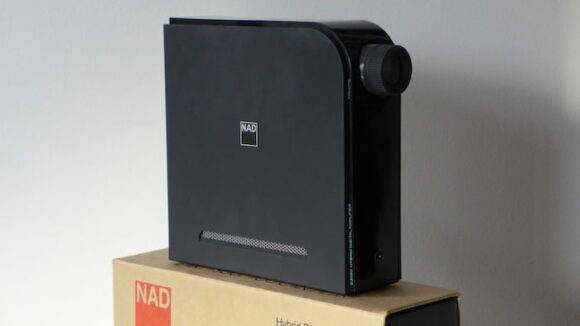 Back to MGMT. Thirty watts per channel of switching juice culminated in a sound with more authority, better coherence and meatier midrange than the Class A/B-ing old timer. Focus lock enjoyed significant lift with player outlines shedding (some of) the fuzziness and vagueness of the vintage unit. The 3020i’s nod toward an overly bright lower treble was also vanquished. Mid-bass grippiness was the D 3020’s standout quality. With the Usher S-520, the newer NAD is the better fit.

Moreover, the D 3020 counters preconcpetions that all digital amplifiers sound thin, reedy and run cool on listener engagement. The NAD might not sound as refined or as elegant as the topologically similar Wadia 151PowerDACMini but its acoustic mass is thicker and its dynamics are more muscular. The Wadia doesn’t sport an analogue input (for external DAC or phono pre) nor does it offer the aptX Bluetooth connectivity that Stereophile’s Stephen Mejias’ girl dug so much. In audio terms, it might be an improvement on standard Bluetooth audio but it’s still lossy. I found it came up a little short compared to the USB input but aptX Bluetooth’s splendid convenience factor when pairing an Android or iOS device is unshakable. 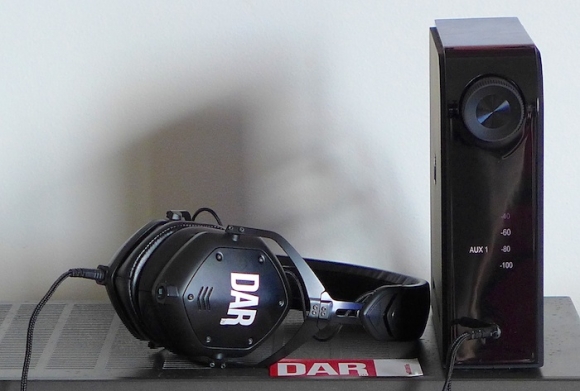 Headphoning home. To get a handle on how the headphone outputs compared, two sub-$400 favourites were deployed: the V-Moda Crossfade M-100 (tricked out with Memory cushions) and Mr Speakers Mad Dogs. Neither amplifier had any difficulty in driving each headphone but neither amplifier were as tonally satisfying as dedicated headphone amplifiers like the Schiit Asgard 2 (US$249) and Resonessence Labs Herus (CA$350). Know that the 3020i made a mess of AKG K-702 – thin, dry and tiring to listen to.

With Massive Attack’s Mezzanine the vintage NAD sounded smoother, warmer but less resolving in the midrange. Bass came on bigger than via the digital successor, predominantly due to some note-edge blurring and sag. The D 3020 was significantly tighter in the low end and more lit up across the remainder of the frequency spectrum. Given the Mad Dogs’ lean towards warmth, I’d peg the newcomer as the preferred partner despite the need for an ugly 1/4″-1/8″ adaptor. For the V-Moda I’d go with the softer, more forgiving 3020i. Those with a lust for detail retrieval will prefer the D 3020.

However, the success of the D 3020 doesn’t solely rest on its ability to digitally encode and then amplify what it sees via its analogue input. The broader appeal here is convenience from an all-in-one solution. Consequently, the NAD’s digital input stage matters hugely. Just how good is that USB input? Will it holler ‘Go NAD’ or ‘bollocks’?

These questions laid the foundations of Part 2 – during which more revealing/$$$ loudspeakers were deployed – and Part 3 outlines how the NAD’s aptX Bluetooth streaming could infect newcomers with a desire for better sound at home.

*A 3.5mm input socket on the rear doubles up as both second analogue input or additional optical input. 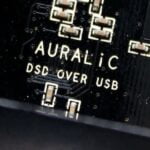 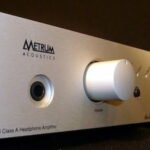