If you’re using a standard-ish PC or Mac to feed your DAC direct with USB audio then chances are you’ll be listening to an audio stream tainted by jitter and electrical noise; it’ll probably sound tonally bleached and lacking in dynamic muscle. A USB-S/PDIF converter will cure some of these ills with the best in budget class being the Audiophilleo2 and Resonessence Labs Concero (HD).

The inconvenient truth about the Logitech Squeezebox Touch is that its S/PDIF output sounds similarly grey and diluted. Prior to the advent of triode’s Enhanced Digital Output you’d have needed Empirical Audio’s SynchroMesh to lift its game. However, the EDO’s reversal of the Squeezebox Touch’s USB port from input to output sees users enjoying re-clocking from the aforementioned USB-S/PDIF converters – far superior to connecting most DACs directly to the SBT over USB. Fact is, there are FAR more USB reclockers on the market than there are S/PDIF reclockers. Steve Nugent’s SynchroMesh leads a field of (almost) one.

With USB ruling the reclocking roost, manufacturers turning their heads to digital audio streamers should ensure their product’s S/PDIF output is low in noise and jitter…or else go home. A new streaming solution needs to best the gold standard of a (used) Logitech Squeezebox Touch + Emprical Audio SynchroMesh.

AURALiC have this week announced that they’ll be debuting their new Lightning ARIES streamer at CES 2014, with more models in the Lightning arriving down the line. Audiostream’s Michael Lavorgna has already jumped on the ARIES’ ability to stream DSD/DXD over dual-band 802.11ac Gigabit wifi which is all fine and dandy if you possess such source material on your NAS or computer hard drive.

Lifted direct from the press release:

“ARIES, the first product in the Lightning family, serves as a bridge between music on network storage and DACs, enabling DACs to stream music quickly and superbly via Wi-Fi in virtually any format, including DSD, double-rate DSD and DXD. ARIES includes a switchable USB host output; digital AES/EBU, coaxial and Toslink connections driven by AURALiC’s patented ActiveUSB technology; and an extremely accurate Femto Master Clock.”

However, for me, the ARIES’ killer feature is its USB output. It can stream up to 32bit/384kHz PCM and double rate DSD over the air and then push it into your DAC over USB. Why so cool? You can BYO USB-S/PDIF conversion (should you so wish).

The other knockout feature is one that much of the competition glosses over: gapless playback. As I’ve argued previously, gapless should be standard on ALL music streamers and not thought of by manufacturers as some kind of digital audio nicety.

Here’s the skinny on the Lightning product family’s tech specs: 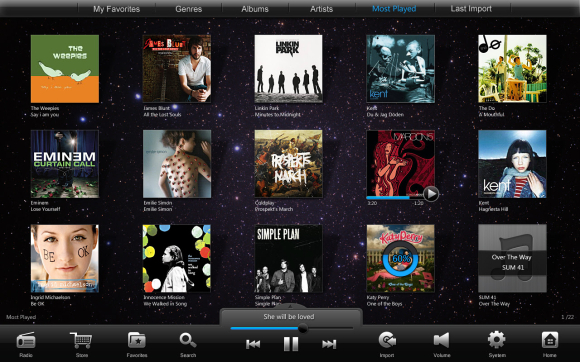 Playback from streaming services such as Spotify will also be supported.

[Photos to come as soon as I have ’em]