You’ll probably know of Sacramento’s Light Harmonic. They make the uber-deluxe $20K DaVinci DAC and $1K LightSpeed USB cable.  Today comes news that the Light Harmonic R&D guys have begun working at the other end of the price ladder.

GEEK is a thumb-sized portable headphone amplifier that is set to leapfrog the likes of Audioquest’s Dragonfly and Meridian’s Explorer, on paper at least. It’s currently in prototype phase and funding for GEEK’s further development is being sourced via a Kickstarter campaign.

“GEEK is the first portable DAC capable of playing DSD and double DSD files. It can play hi-res PCM files up to 384k, which is still rare for any DAC, but very rare for a portable one.”, says Gavin Fish (Vice President, Sales & Marketing for Light Harmonic).

First? Rare? Not quite – the Resonessence Labs Concero HP does exactly that – I currently have one on my desk – and Schiit Audio have a budget DSD bomb dropping soon.

“In addition to a DAC and powerful headphone amp, GEEK features proprietary spatialization software which produces the image of a 3-D sound-field around the listener”, continues Fish.

GEEK will run with TWO headphone outputs for sharing.

Light Harmonic expect to start selling the Geek through traditional outlets in early 2014 for US$299.

EDIT:  The $99 pledges all sold within three hours. 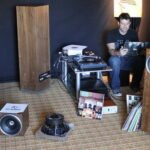 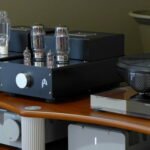