Having the show spread across two adjacent hotels – the Atrium and the Hilton – takes some of the sting out of moving between rooms and floors; there didn’t seem to be too much elevator queue tension at the Hilton (unlike RMAF!). The dividing driveway plays host to a couple of food trucks and some pretty girls hawking solar powered USB charging devices. Moving between hotels affords attendees a reminder that the California sunshine is lovely and that there IS life beyond hi-fi…even if that life is a fancy car belting out that Eagles song.

An all Heed setup (+ Funk Firm turntable) rules one of two Profundo Audio rooms. I’m here to meet one of the Huszti brothers, Alpar. He’s the marketing side of the Heed operation and is here all the way from Hungary to play host. On show, the Enigma imaging wizards driven by an all Heed electronic show. Four monos, two to bi-amp each speaker. I call it madness. Alpar reckons if you can do it, why not actually do it?! Fair enough. I reckon Heed need to make a bigger noise about their white casework recently imagined and then executed for their new UK distribution operation. Apparently things are going gangbusters for Heed in the old country. But it’s not their strongest market – it comes it a number 2. Number 1? France. Zut Alors!

Gary Gesellchen and Rick Kernen head up Vanatoo and tell me they’ve spent the last five years developing the Transparent One powered standmounts. Some folks might see desktop/computer speakers. I see a neat solution for smaller living spaces – get those babies on stands. And that’s exactly what’s happened in their Atrium demo room.

When I eventually give up this gig as a member of the press, I doubt I’ll want the latest, greatest, baddest of systems. I’ll want something super-simple: probably standmounts with as few wires as possible. These guys from Vanatoo have me covered. The Transparent One are clever-clever powered speakers. One speaker runs active and feeds the other (passive) box. There are several digital inputs – the optical fed from an Apple Airport Express keeps things minimal – a 1/8” jack for an analogue source too. As the name suggest, the sound is transparent and honest. Bass goes real low but there’s an auto-sensing subwoofer output if you need more. Sounstaging goes real deep. Not for Spendor or Audio Note idealists, but a solution for newcomers or pragmatists. US$499. Ridiculously solid bargain.

Pretty much everyone comes to the KEF space to wrap their gills ‘round the LS50 standmounts. I’ve only heard them at shows like this and every damn time they sound superb. Every man and his dog has already reviewed them (so I won’t be). Go here, here, here and here. They’ve been an enormous success for KEF and production is likely to continue indefinitely with the “50th anniversary model” quietly slipping away from the front baffle.

The LS50 presentation dances a crooked line between chaotic and slick. These guys know how to work a room and truly engage with attendees. The KEF show is helmed by brand manager Johan Coorg, a right proper Brightonian. He enunciates his words meticulously and dreads punters bringing Norah Jones’ music (and the like) into his demo space. It took me a second visit to dodge such typical audiophile fare. Second time around and we are treated to a spoken word piece about boiled cabbage (yes, seriously), Prince and some ska. A room for fun and banter.

On static display against the real wall are the X300A desktop/computer speakers. Each speaker is actively driven and each speaker contains a 24/96 USB DAC. US$799. The nearest rivals to the Vanatoos in my book. Outstandmountstanding. 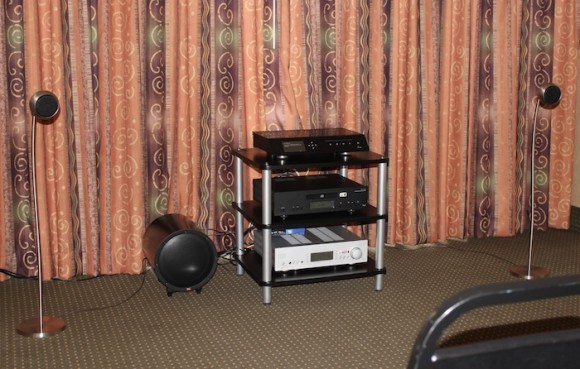 The Anthony Gallo Acoustics room knocked me off my perch. I entered thinking lifestyle. I left feeling stunned. Even via the horror-show of “Steve Don’t Go” one could discern a clean/present midrange coupled to a solid low frequency grounding. Absolutely no sense of anything missing. The Micro SE with micro stands + TR3 sub totals to $1875. It wins on looks and it wins on price. If I were going to make any glib comment about Wife Acceptance Factor, it’d be here. The lesson learnt: a high-end sound can be had from something that’s been styled for modern living spaces.

Gary Alpern (right) doesn’t dig his new Metrum Hex…yet. “It sounds broken!” he opines. Fair enough. Not everyone likes everything. It could well be that the Human Audio digital products fronting his demo system are better. Anyway, I’d come to have a quick butchers at the widely/loudly touted Super Sterling 120 (US$4175), the “world’s first single-ended KT120 amplifier” recently birthed by Audion – 25 wpc of pure class A. As mentioned in Part 1 of this coverage, it’s pretty much impossible to judge anything but the system-in-the-room-as-a-whole at hi-fi shows so I’m unable/unwilling to comment on how awesome the beefy new Audion sounds. However, as soon as I spied the DEQX Mate processor (US$4500), Alpern executed a cute demo as to its effectiveness with soundstage focus and overall clarity. DEQX’s US sales manager P.J. Zornosa (left) witnessed my amazement. Thirty seconds was all it took to make me want to own one. Crikey!