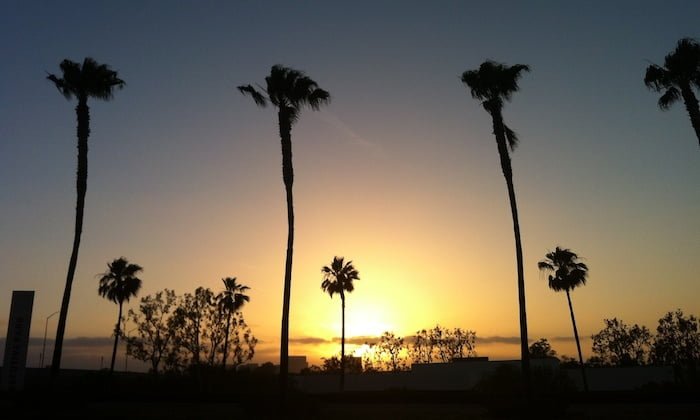 The most hotly-debated topic in computer audio presently must surely be DSD. It’ll come as no surprise that the guys from Mytek are 101% behind it. They  were the first manufacturer to bring DSD playback into homes for under $2k. (Director of Marketing) Chebon Littlefield’s enthusiasm for DSD fires machine-gun style between cigarette breaks. He talks of the Brooklyn-based company being pivotal in DSD uptake in the professional recording studio space. Littlefield also urged me to convert a PCM file to DSD and compare it to the original – he’s convinced I’ll hear a difference. Perhaps I will. 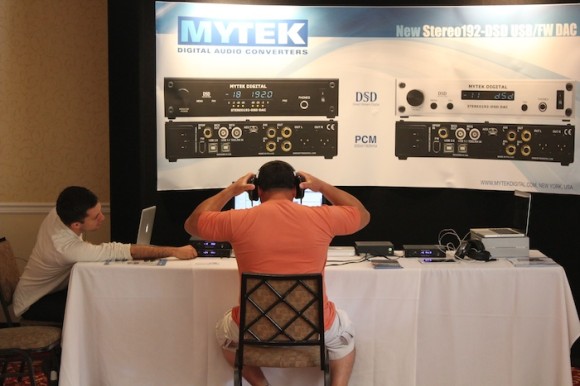 Like the best of America, the Mytek Stereo 192-DSD DAC is packed with options: would you like analogue or digital volume attenuation? RCA output or headphone output? Would you like to attenuate those independently of one another? Would you like sharp or slow filters? USB 1.1 (driverless), USB 2.0 or Firewire connection? Do you want to connect an analogue device as well? Flip the lid: what gain level would you like? The check for all this rings up to a very reasonable US$1595.  Review to follow in due course.

The grinning young fellas from Wyred4Sound have two rooms bursting with gear. Chief designer EJ Sarmento is the quieter, more unassuming of the two. He keeps his cards close to his chest and rarely let’s his abundant technical know-how spill. Sarmento tells me that (on average) five DAC-2 are arriving each day for SE upgrades.  It would seem interest in DSD with existing DAC-2 owners is robust. 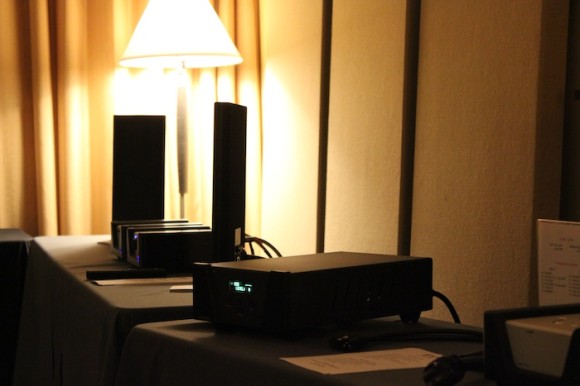 Right hand man Clint Hartman is the more vocal of the two. He demos the the DAC2 DSDse (US$2500) will flair and friendliness: a run through the same piece of music first as 24/192 PCM and then as DSD. I noted superior spatial information and more tonal mass from the latter. Others in the room concluded similarly.  Does this mean DSD is the superior format or does it mean that the new Wyred4Sound DAC is simply better at decoding DSD than PCM? I can’t answer either way. I’d need to repeat this A/B comparison with a selection of DACs before bringing down the hammer. 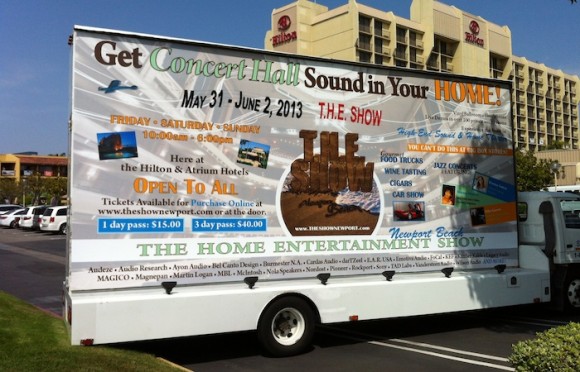 It’s also a shame that the music involved with such comparisons isn’t to my taste. And there’s the rub with DSD as it currently stands: there’s bugger-all content out there. I already own more titles on vinyl than can be acquired by fair means (Blue Coast, 2L, Channel Classics etc.) or foul (SACD rips) on DSD. Even assuming the validity of it sonic superiority, it’s hard to get behind a format when the software just isn’t there. Isn’t it more critical that a DAC first sounds great with PCM (99.9% of most digital audio libraries) before you even think about DSD? Some might argue that the software will eventually flow but that will only give rise to forum flame wars about provenance (“Did they use PCM in the studio?”).

HDTracks have made great inroads with hi-res PCM content in the past couple of years, expanding their catalogue beyond the niche of ‘audiophile’ music. They now sell albums from Suede, Daft Punk and R.E.M. but as anyone who’s heard the new album from The National can attest, not everything sounds amazing in 24/192. It’s another compression casualty. GIGO. 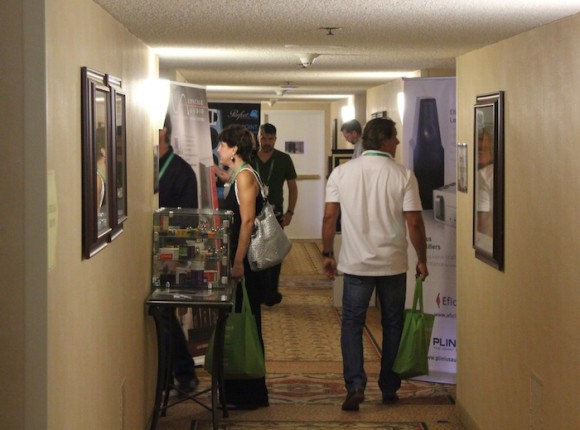 Someone said to me at Newport Beach (I forget who) that we should be putting more pressure on artists to take care of their records all the way down the chain. We should be persuading them not to walk away once the recording is in the can and to ensure that their record company (presumably focused on radio-play) doesn’t foul the mastering.

Several manufacturers I spoke to claim that their current lack of DSD support is starting to hurt sales. That consumer demand is forcing their hand. People are asking: “Does it do DSD?” I’m curious as to what exactly is driving this demand? Is it audiophile nervosa? Is it obsessive compulsion? It’s as if someone has lit a match inside an airport hangar and a bunch of people are now screaming “FIRE!”. You don’t need me to piss on this parade when far more knowledgeable voices from Linn and Ayre Acoustics are playing fire brigade.

I suspect computer audiophiles have heard LOUD NOISES about DSD from various quarters and its (alleged) sonic superiority and they are just plain curious.

I arrive at the Schiit Audio stand to ask Jason Stoddard and Mike Moffat how sales of Bifrost Uber are going. “Superbly”, apparently. “Uber” refers to a revamped analogue board, US$70, but there’s also a second generation USB input that will run you an additional US$100. That brings the total cost of a fully tricked-out Bifrost to US$520. Schiit have joined the (growing) number of manufacturers taking budget USB solutions super-seriously. End users rightfully expect direct USB to sound as good as when diverting USB via S/PDIF using an off-board convertor. This isn’t as common as you might expect so it’ll be interesting to see how close Schiit have got; a review unit is coming my way.

How the heck did I miss the Asgard 2? I’m told this new version has seen some trickle-down from Mjolnir. US$250.

I ask about the statement units but Stoddard doesn’t seem too worried about when they’ll see the light of day. Maybe Q4 this year. Maybe Q1 next. He wants to talk about DSD too. He thinks it will remain a niche market of its own. Moffat snorts something about “Remember how HDCD was gonna change the world?!”. A Schiit-eating grin then lands on Stoddard’s face and he begins to whisper… 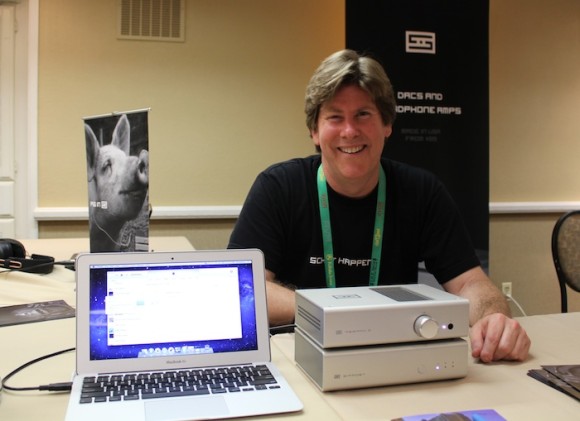 …Schiit’s got something DSD-related coming. I can’t give you details yet, sorry. Stoddard and Moffat have me sworn to secrecy. (Yup, I’m the guy who’s got a secret and he’s not going to tell you). I wanted to make this product ‘Best in Show’. Imagine that: ‘Best in Show’ to a product that doesn’t even exist yet! Actually, it does exist – the prototype board was tucked under the table. Some of you will wet yourselves when you learn for how very little cash Schiit will let you scratch that DSD itch…and then drift back to PCM because that’s where all the music is. Ach, I’ve said too much already. 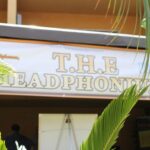 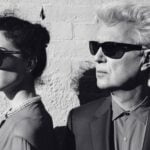