I’ve not seen much written about this so I thought I’d give it a nudge. PS Audio have expanded their PerfectWave line of DAC and Player to include something quite unusual: the PerfectWave PowerBase is both isolation platform and power conditioner combined in one rather sleek-looking unit. It’s hand-made right there in Boulder, Colorado.

The video found on the PowerBase’s information page is pretty darn informative. It’s got that Apple promo look to it (so it is easy to watch). Perhaps Paul McGowan fancies himself as the Steve Jobs of hi-fi?! I guess someone in the industry has to.

There’s no doubting that PS Audio products look as good as they sound but I’d love to see aesthetic enthusiasm move beyond lazy labelling a product with “wife acceptance factor”; it’s a bit patronising, isn’t it? If something looks “cool”, just say “Hey! That looks COOL, dude”. 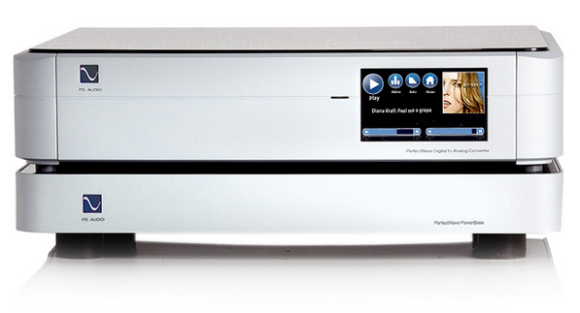 Anyway, if you’re listening to music as you read this and you don’t want to pause it to watch the aforementioned video, here’s the press release skinny [my italics]:

Isolation
The primary goal of the isolation base function is to reduce the effects of microphonics, the tendency of equipment to act like a microphone and re-amplify a delayed “ghost image” of what’s playing on the loudspeaker.

Traditional isolation products such as cones, spikes, platforms and discs are effective only within a relatively narrow range and rely primarily on either reduced contact area or diffusion of mechanical energy to reduce the effects of microphonics.

The PowerBase takes a different approach by engineering a holistic system that includes both vibration dissipation and masking.

Vibration dissipation
The key to effective mechanical isolation is energy diffusion over a broad spectrum. The PowerBase achieves this ideal using two subsystems tuned apart by a factor of ten.

The first subsystem relies on high durometer Sorbothane feet attached to a steel chassis, tuned to 30Hz, forming the first level of energy dissipation in the system.

Mounted inside the base chassis is the second subsystem, tuned to 3Hz, formed from low durometer Sorbothane feet supporting a massive 20 pound 1/4″ steel floating platform the equipment sits on.

The combination of a soft suspension high-mass platform coupled with a stiff suspension low-mass body form a broad spectrum mechanical energy dissipation system that is effective at reducing induced surface vibrations from the loudspeaker pair.

Masking
The PowerBase can dissipate a broad spectrum of energy sent through solid surfaces but equipment is still exposed to airborne vibrations, a problem the PowerBase addresses by masking techniques similar to dither.

Masking is a simple system of adding back randomized noise to the signal in much the same way room diffusors work. The system is engineered to couple the diffused mechanical energy of the platform back into equipment helping mask any airborne vibrations picked up by the stereo system.

One-way gate filtering
Integral to the PowerBase design is a low loss power filter that reduces both differential and common mode noise in the home’s AC supply as well a those generated inside the equipment powered by the product.

Noise reduction for both differential as well as common mode is >40dB starting at 100kHz and applies equally to both incoming and outgoing power line noise.

The PowerBase measures 43 cm wide, 36 cm deep, 6 cm tall and weighs 11 kg. It is available in black or white finishes and retails stateside for US$995.   The PowerBase will sell for AU$1249 down under.