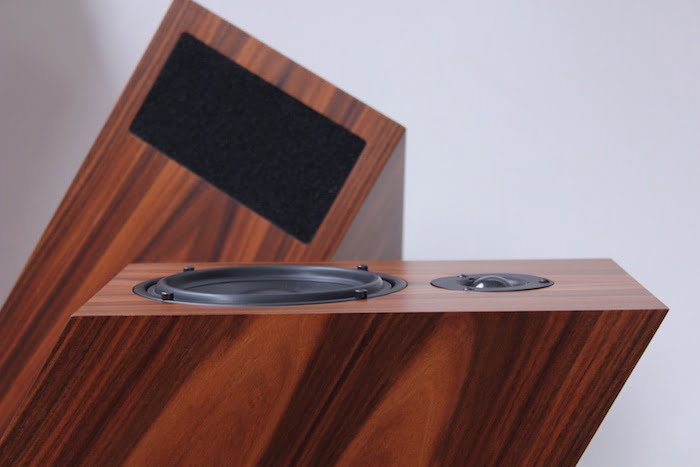 “Your eyes are bigger than your belly, son.”   That’s what my old man used to say to me as a kid: I’d piled (too much) food onto my plate and then failed to finish it all. He was right. This is easily done in hi-fi-fantasy land too. I have an experienced audiophile buddy whose medium-sized room calls for standmounts. He buys standmounts but then misses the bass of the outgoing floorstanders. He buys another pair of floorstanders and the bass overloads the room so in comes another pair of standmounts. And then he misses the bass……..around and around it goes. He now owns several pairs of each.

It’s easy for your eyes to outsize your belly. Buy floorstanders and you risk overloading your room. Without treatments, this is a disaster: standing waves and midrange smearing soon become adversaries. Living in an apartment, it’s far better to start with standmounts and then slowly upsize; think about home-auditioning floorstanders that might work in a small-medium listening room. One such floorstander comes from Hungary’s Heed Audio. 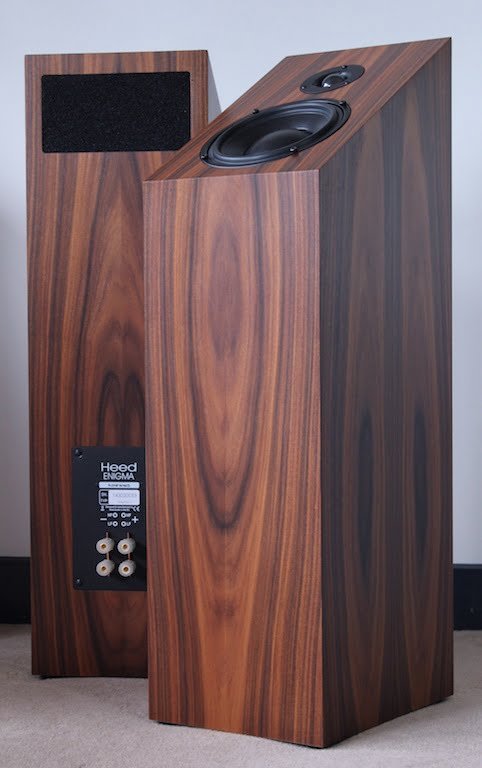 Heed don’t make any other loudspeaker. The Enigma 5 (AU$3250 and up) stands alone. Since its inception over a decade ago, ongoing adjustments and improvements have been implemented. The ‘5’ refers to each of the five key stages in this model’s evolution.

Some fifteen years ago, Heed’s Huszti brothers – Alpar and Zsolt – were re-sellers of Shahinian omni-directional speakers. Suitably impressed and then inspired, head honcho Zsolt took to designing his own interpretation.

In 2000, Zsolt penned a series of articles in his DIY hi-fi magazine on “How To Design An Omni-directional Speaker”. The seeds for the Enigma were sown. His aim: to combat the pre-conception of some directional hard-liners that all omnis lack imaging and focus. 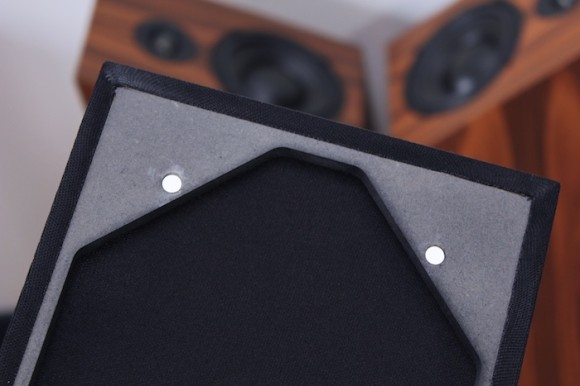 Imagine. Picture a PMC TB1i in a taller box with a chamfered face; a compact floorstander that reaches waist height. That’s the Enigma 5. Just like the aforementioned PMC standmount, the Enigma cabinet internals are transmission-lined with rear-firing exhaust.

I’m reminded of the time I wrestled my room with VAF DC7 (floorstanders). Those Aussies demanded breathing room aplenty. The Heeds aren’t anyway near as challenging with in-room positioning. Plonk ‘em down and off you go. Rubber feet instead of carpet spikes best underlines Heed’s relaxed attitude toward setup. Bass depth is easily found, heft and weight not so much – easier to get working nicely in a smaller space. The Enigma 5 remind me of the way Rega voice their RS1/RS3 – nimble bass bounce rides well ahead of chest slam. The lower frequencies on the Enigma are meatier than the Regas. On the best track from Radiohead’s Hail To The Thief (“The Gloaming”) the bass compelled me to bring the squat Heeds further into the room. The rear-firing port benefits from a little (but not too much) breathing room. Do not doubt the ability of the Enigma to go as low as many other similarly priced floorstanders.  Radiohead’s bass throb was nothing short of stunning.  Such eloquent low frequency realisation anchors songs like this to the floor. 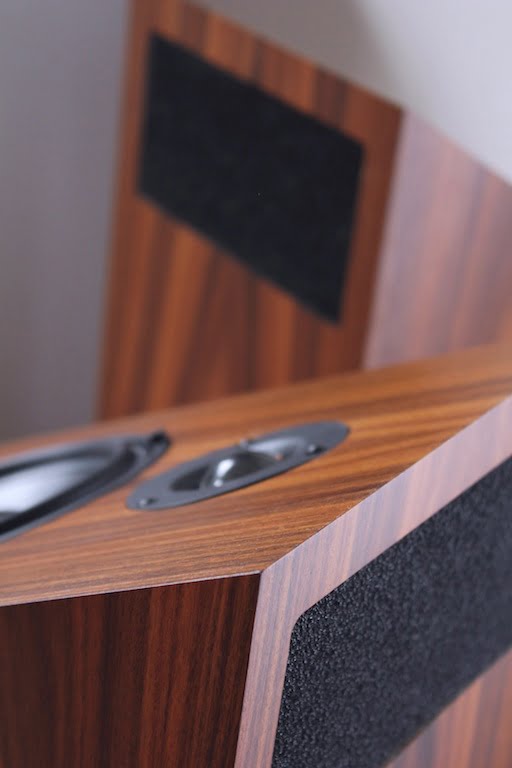 An ability to play nice in small rooms is a primary loudspeaker prerequisite for hi-fi shows. The average room at RMAF and T.H.E Newport Show doesn’t stretch much beyond a few meters by a few meters more. Perhaps the Enigma’s ability to come out fighting when cornered is why the Blackbird Audio room was my pick of the show at Newport Beach this year. Or perhaps it’s because one didn’t have to sit front and centre to witness the core of the music.

In my 2012 Newport Show coverage I referred to the Enigma loudspeakers as omni-directional. They are not – sound doesn’t radiate the full 360 degrees as per MBL. Alpar and Zsolt refer to them as ‘non-directional’. I stand corrected.

The design brief that underpins the Enigma is the avoidance of a directional speaker’s more limited sweet spot.

I’ve spent the past few weeks quietly raving to anyone who’ll listen about Magnepan MMGs. They are one of the best buys in budget hi-fi speakers but they don’t escape the caveats of 1) needing a juicy amplifier and 2) restricting the best listening position to a limited sweet spot. Only if you sit in the main listening chair (and a few feet either side) do you get the full picture. Stand-up and the upper-most frequencies roll out of view. Ditto when moving off to the side. The MMGs are wonderful, but they’re not the most sociable of loudspeakers.

Swapping out the MMGs for the Enigma 5 meant a straighty one-eighty on the Magnepan compromise. A return to sociability! Move around the room and the Heeds’ stellar imaging remains rock solid. Ambient information and ‘air’ are also strong points. Chosen for its wide dispersion, the Enigma’s tweeter is a conventional 28mm soft-dome from Morel. 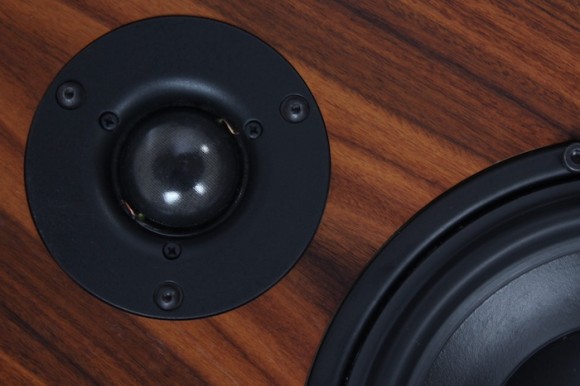 “One of the inherent problems of directional speakers is that their tweeters must be tamed, otherwise they tend towards shoutiness. However, you pay a high price for that. if you throttle them they will sound much too subdued. Shrilling metallic cymbals and hi-hats sound shriveled and damped.”

This tweeter implementation probably accounts for the greater reveal on tonal and (especially) textural information. Some might simply refer to this as ‘more detail’. 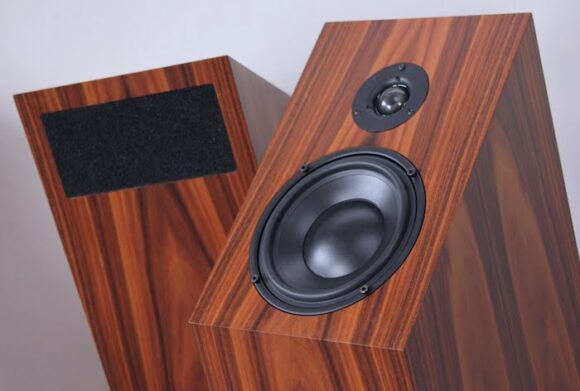 Let’s talk tunes.  The clickity-clack train cars that rumble through Thom Yorke’s Eraser run closer to the rear wall than via Magnepans. With the volume turned up, we see a train speeding past a level crossing. For quieter passages: think time out on an art gallery bench to admire a painting. These floorstanders allow time for you to submerge yourself in music; far from the immediate head-dunk-drown of brasher boxes.

Withdrawing from the MMG means acclimatising to a shorter soundstage but also greater refinement. The Heeds project a wall of sound that’s not as tall (as the MMG) and one that’s closer to the rear wall. Comparatively, the American panels push tunes right under your chin. 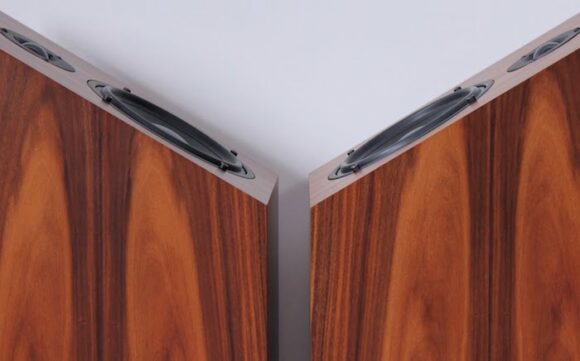 Drifting in to more orchestral territory with Philip Glass’s Low and ‘Heroes’ symphonies, the daintiness of rear-soundstaged percussion is an cinch to follow. Nothing is left behind. A front-end whose strong suit is instrumental decay (Metrum Hex + Wireworld USB cable + MacMini + Audirvana) helps things along nicely.

Across the entire frequency range, delicate placement is the Enigma’s MO. Talking Heads Fear of Music shows off killer separation and width. “I Zimbra” doesn’t come across as quite so claustrophobic: the Enigma 5 open the window and let air in. I noted a keener outlining of rhythm guitar licks and keyboard sounds. Player separation comes on strong.

With the more disco-centric “Cities”, the arms length restraint can get frustrating. Look but don’t touch. The Heeds expose the keyboard funk layer of Life During Wartime with devastating alacrity (on one hand) but never quite take you into their bosom (on the other). It’s a different story with Calexico’s Hot Rail; a record with a heavy Mexican influence with which the Enigma 5 reward in spades. An exceptionally pleasing take on trombone blat and accordion wheeze are highlights. Such strengths don’t leap out at you from the get go. They creep up slowly, softly. 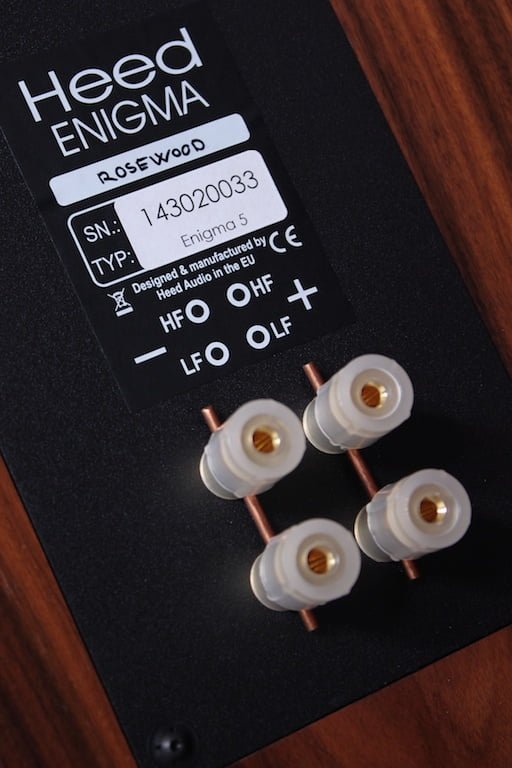 Amplifier appropriation. I’d go for something from the warmer/softer side of the tracks. I started with the Rega Brio-R and thought the pairing lovely. A move to the considerably more powerful Audio-gd Master 10 over-damped the bass and cut too clean and dry up top. The Enigmas benefit from some humidity. No accident then that their Obelisk integrated is just the ticket; its sonic signature is where tubular flavours cross over into solid-state topology. Some might call this synergy. But synergy isn’t something that’s wand-waved into a system by audiophile fairies. It all comes down to physics, fella. Of course loudspeakers and an amplifier from the same manufacturer are more likely to coalesce!

The Enigma 5 is a loudspeaker that digs deep for sonic spirituality. There’s no shouting (or preaching) about what it unearths. There’s no collar grab. You go to it. Imagine watching a football match: the Enigma listening experience doesn’t put you pitch side for in-yer-face sweat and swearing. They put you up in the stands for a broader view of musical turf and instrumental game play. Delicate handlers of detail. A high-quality floorstanding meal with a portion size that’s just so. Brandies all round! Sit back and soak it up with friends. These are speakers for social gatherings. Opt for pretty much any listening position in front of the speaker plane and you’ll enjoy understated humility and enchantment. 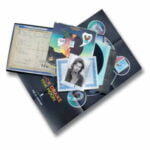 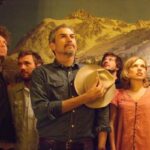