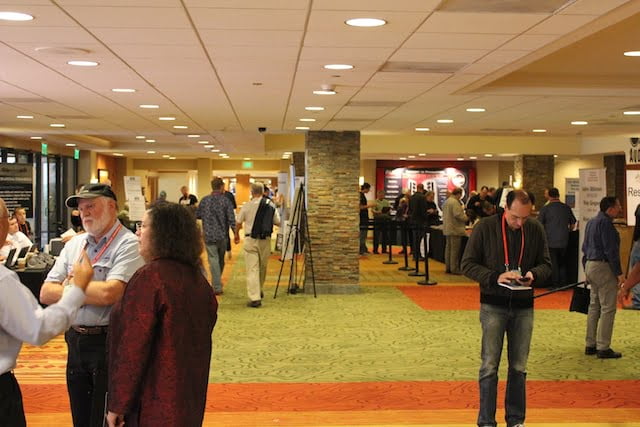 Little surprises Part 1. Over on the far side of the CanJam area is the Digizoid table. Made in Scottsdale AZ, their ZO2 ‘personal subwoofer’ is a portable headphone amplifier with hot sauce. Hook it up to your laptop or iDevice and you get 32 user-selectable sound signature profiles from the scroll-wheel on the side. The glow-light moves from green to red as your up your low-frequency enhancements. This graph says more than words alone can convey: 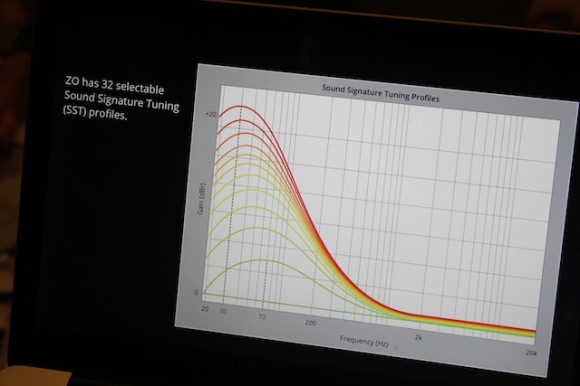 The sound output on the Samsung Galaxy SIII comes up short when compared to the iPhone4.  Oh dear.  The ZO2 rescues the latest Resident Advisor podcast from the playback doldrums.  Ideal for the rough and tumble of the road.  The internal bracing is of a honeycomb structure.  My 100+ kgs failed to break the casework of the ZO2 when standing on it.  Digizoid sell this super little device for $119. 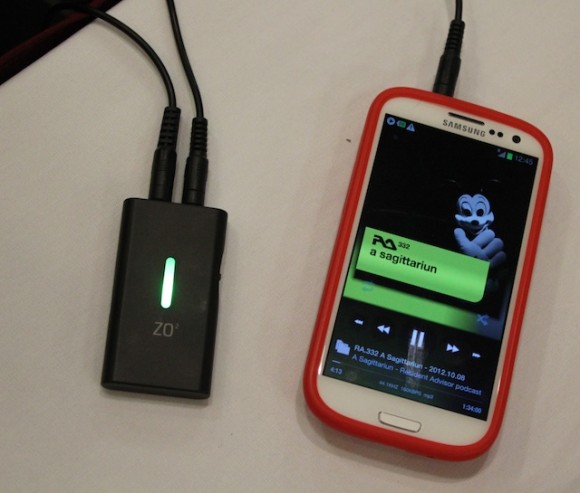 Little surprises Part 2.  I’ve heard tonnes of great things about the Audioquest Dragonfly head-amp/DAC.  It doesn’t disappoint.  And so, so tiny.  Only a fool would think that this little thumb-drive-esque device could supplant a multi-thousand dollar decoder.  But hey – for $249 it’s a must have for anyone that wants good sound quality at the office or on the hotel circuit. 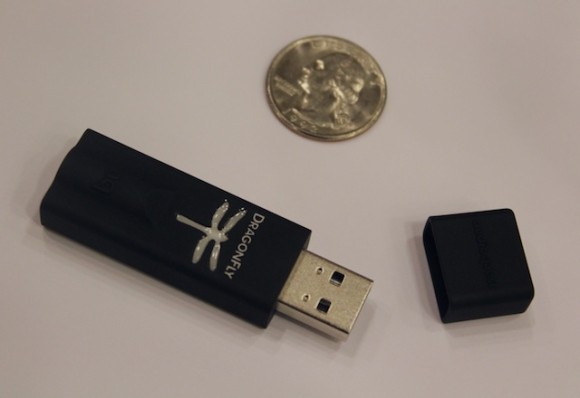 In the Serenity Acoustics and Dodd Audio room (nearly) everything is running on batteries.  At least I think that’s what Eric Hider said.  Hider’s still working like a demon on perfecting his hi-res capable Tranquility DAC ($TBA) under the db Audio Labs banner.  The decay and shimmer on cymbals was out of this world.  One of the best-sounding rooms at the show. 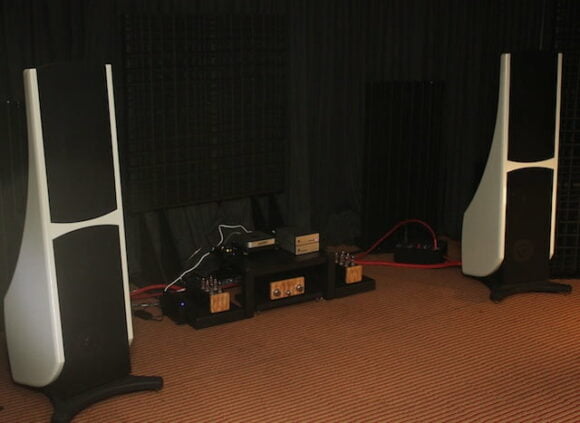 The KEF LS50 ($1499) don’t disappoint.  That’s the same driver that’s found in the flagship blade.  Punchy, dynamic and all the rest of it.  Get these dancing with a Rega Brio-R and you’d be laughing. 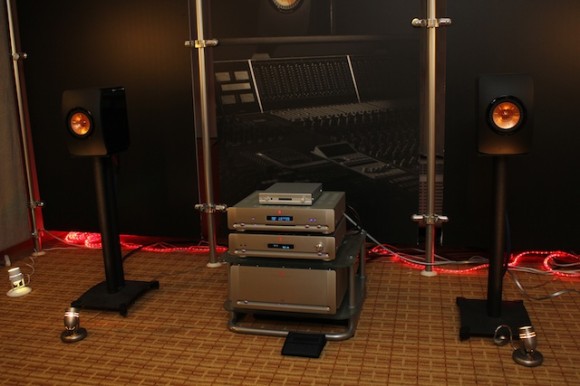 Jason Stoddard and Mike Moffat have been shipping the Schiit Mjolnir ($749) head-amp and Schiit Gungnir ($749/$849 with USB) DAC balanced combo for a while now.  Most consumers are buying both as a pair.  Bonnie and Clyde behind Audeze LCD-3 guns.   Full, rich and all-enveloping.  Rich chocolate sauce with high cocoa content.  Requires no additional sugar or preservatives. 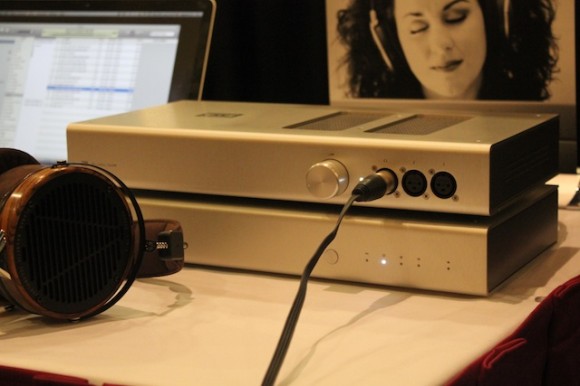 Moffat let it slip that we won’t find any off-the-shelf chip in the top-of-the-Schiit-list DAC.  Stoddard added that the statement DAC and head-amp won’t appear until Q1 of 2013…but there’s some super wallet-friendly Schiit product launching soon that’s sure to turn many heads.  Shhhhhhh. 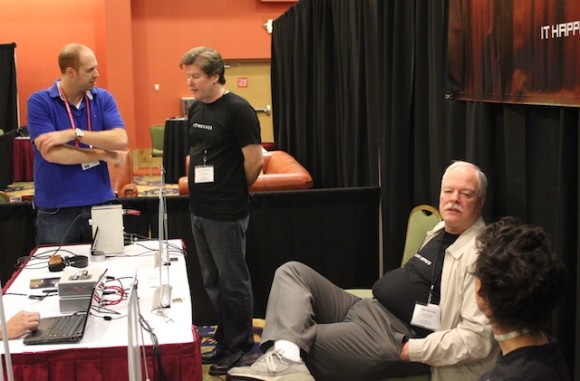 Jonathon Derda is a slick as ever with demos for Peachtree Audio. The Nova Pre ($999) runs a ESS Sabre 9023 chip and the trademark tube buffer.  It’s paired with the matching Peachtree220 ($1399).  220wpc of Class D power.   Look, more Amarra!  Those guys are on a lot of show computers. 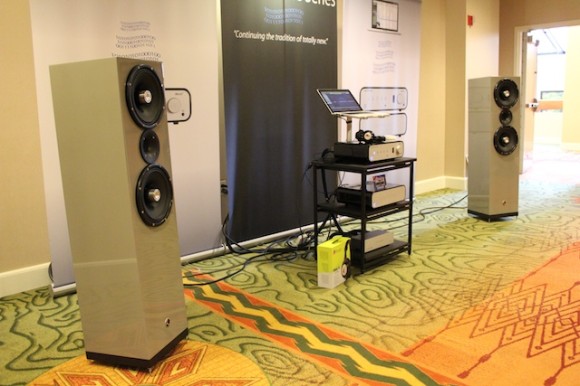 Zu Audio‘s Definition MKIV ($16000) might be super-duper efficient and run you over six times the cost of the amplification but the Peachtree twins bring control and dynamics.  They do not come up short one bit.  Dynamics are exceptional.  Peachtree have quietly added the X1 24/192 USB-S/PDIF convertor to their roster.  Every computer audio company worth their salt has one of these on offer these dasy.  RRP is $199 and it begins shipping in November. 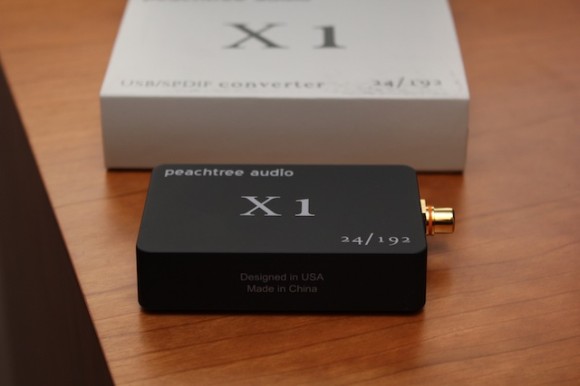 Talking of which, Canada’s Resonessence Labs are launching their Concero unit at the show.  It’s a palm-sized DAC and USB-S/PDIF convertor in one box. $599. 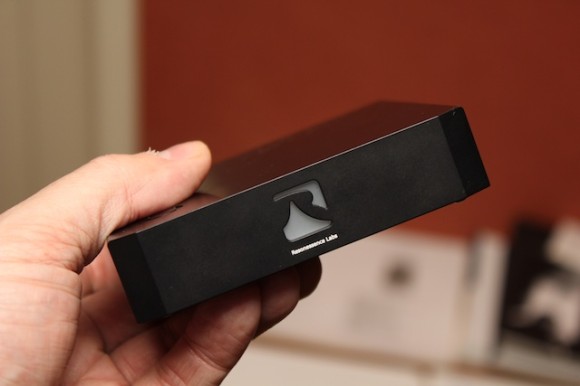 Inside is the now ubiquitous – in budget circles at least – ESS Sabre 9023 chip.  Mark Mallinson’s team have done some neat work in including two additional up-sampling filters which can be selected by the user with a standard Apple remote control. 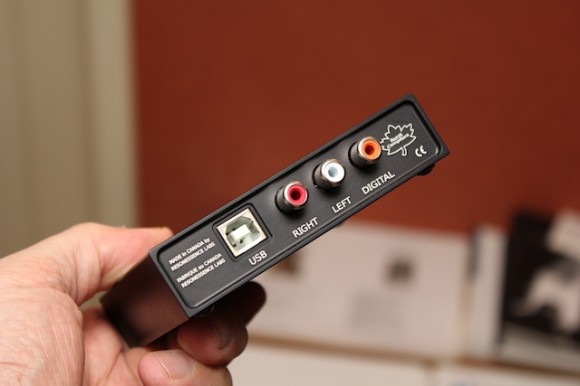 The standard ESS filter sounded slightly flat and lifeless next to the Resonessence custom code.  Just as Audioquest’s Dragonfly DAC lights up a different colour with each sample rate, the Concero’s logo glows a different colour for each filter.

And that was Day 2.  The punter turnout didn’t seem as strong as last year.  At least, that was the vibe on the floor.  Maybe it was due to the cool/damp Autumnal weather? 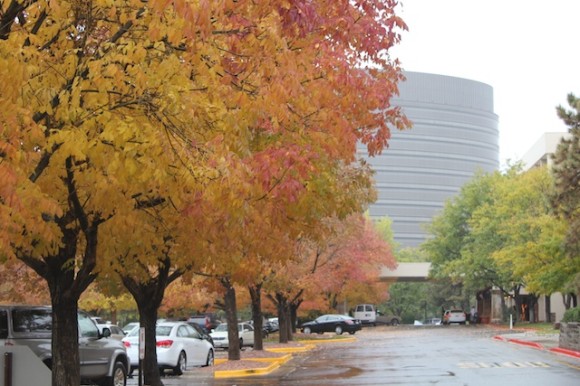 EDIT:  the festival organisers reported that numbers were up on last year.  So there you go. 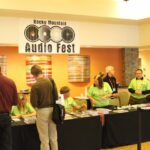 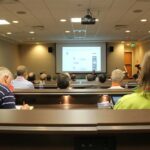