With their entry-level MyDAC (AU$499), Micromega have joined other field runners in refusing Pacific Rim production and/or assembly. The MyDAC was designed in France and it is manufactured in France. National pride is a powerful consumer persuader because it suggests superior quality control, greater longevity and support for the local (job) market.

Ironically, unboxing the MyDAC doesn’t burn you with homefire confidence. The ABS plastic shell of the MyDAC connotes shades of Ikea and – to a much lesser extent – Apple. Playing heavy on the latter for marketing purposes will likely lead to end user disappointment. A Jonathon Ive designed DAC would definitely feel more substantial than the lightweight Micromega. In the hands of the consumer, the MyDAC looks and feels closer to Mattel or Fisher-Price: rudimentary, basic, and functional. You wouldn’t blink twice if you saw this DAC on display at ToysRUs.

“The reasons for the plastic case are more than one. The plastic case is an important part of the design. By choosing totally non-magnetic material, we are able to control all fields at the board level. This is more predictable than a metallic case.”, says Schar. 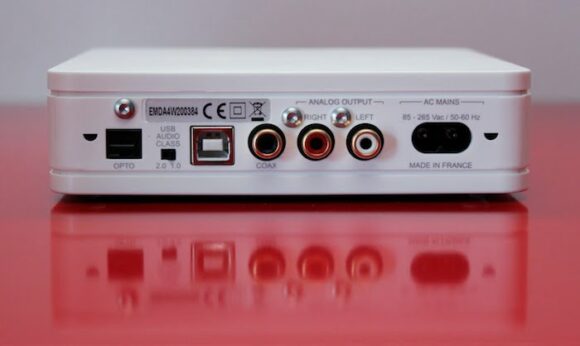 No power brick here. The in-house designed SMPS has been internalised. Quick on the draw with more thorough email responses, Schar elucidates:

“MyDAC is the only USB D/A converter in the market and in this price category to offer an onboard Switch Mode Power Supply especially designed for MyDAC, with a very special power supply section for the analog circuitry, offering unprecedented noise performance for such a device.“

“This means that we have three different technologies in the box ( SMPS, Digital circuitry and D/A conversion and Analog amplification) needing to get along together.“

“It is essential to make a layout where all effects between the different sections and technologies are controlled at the board level without any external influence. A metallic case, even in non-magnetic material like aluminum, would have an influence on the circuit’s behavior. This is the main reason why loaded ABS was chosen for the casework.”

Out back, a switch toggles between USB Audio Class 1.0 and 2.0 modes. Both modes run driverless on a Mac. Windows people will need a driver for USB 2.0 operation.

The USB receiver section deploys the ubiquitous XMOS chip and the S/PDIF receiver is a Wolfson WM8804. A surprise drops in for coffee when you compare a direct USB feed (from MacMini) to a signal S/PDIF re-routed via M2Tech’s Hiface Two – they sound pretty much identical, the direct USB connection being free of the over-etched treble that sometimes troubles the Italian convertor. Credit is due to Micromega here for such an excellent USB implementation.

Processing the digital feed is a Cirrus Logic CS4351. Much like ESS’s 9023 Sabre chip, the CS4351 DAC chip exhales 2V so no gain is required from the output stage, itself a buffer consisting of an OPA1642 from Texas Instruments. 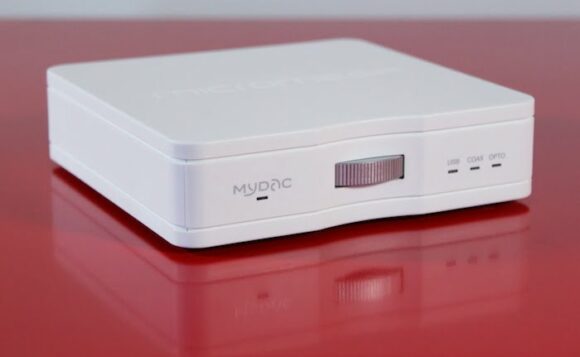 Be warned.  First impressions are VERY deceptive. Once you’re up and running, the MyDAC hoses away any doubts as to its sonic prowess.

With most budget DACs one must choose where to accept compromise. Separation or body?  Pick one.  Designers usually achieve the latter by sacrificing some of the former. It’s a natural consequence of designing to a price.

A furious blast through The Hold Steady’s Stay Positive and the MyDAC pitches its tent closer to camp separation. There’s nothing thin or reedy about its presentation though. Overall acoustic mass is good. Points are awarded for it not sounding edgy or metallic in the upper-most frequencies. It’s reassuringly smooth. Not a common personality trait at this price point.

Bass impact or reach isn’t as good as the Metrum Hex (€2185). Neither are tonal colours as indelibly inked. For peer group assimilation we must push the Micromega further down field. 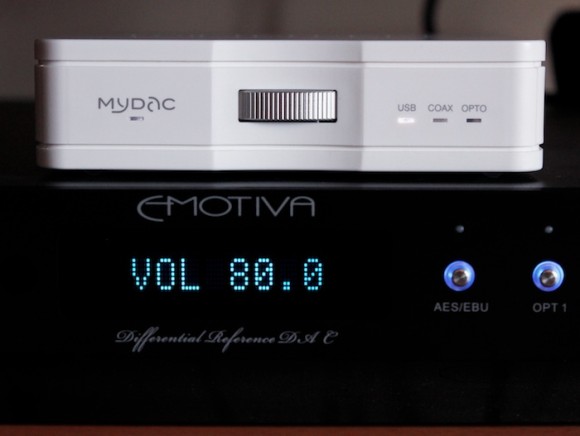 The MyDAC was directly compared to the Emotiva XDA-1 (discontinued, $299). The XDA-1 is no slouch in its own right. It’s one of the better budget units and I still dig the same qualities that arrested my senses when I reviewed it in 2011.

Your eyes do not deceive you: the Emotiva nails the Frenchman to the floor when it comes to functionality and connectivity: show-pony casework, balanced outputs, volume attenuation. However, the tables get turned in listening tests. Listening to David Bowie’s “Space Oddity”, the Micromega is more lit-up (but without suggestion of upper-mid glare), energetic and s p a c i o u s. It’s closer to a performance under house lights than the shadier, more veiled American. Moreover, when giving room to a 24/88.2 copy of Aftermath, the Emotiva USB’s input tops out at 16/48.

In DACville, qualitative differences are more often than not only hair’s widths apart. Not so with this A vs. B. When decoded by the MyDAC, a FLAC of New Order’s “Blue Monday” is loaded with more fringe-dwelling information; the edge of that relentless kick drum more crisply cookie cut. Want more air in your digital playback chain? Again, the MyDAC goes further than the Emotiva. Case in point: Led Zeppelin’s “Stairway To Heaven”. Micromega peel the song’s roof back to allow the listener a better view of the players housed within. Those guitar steps get built a few stories higher. 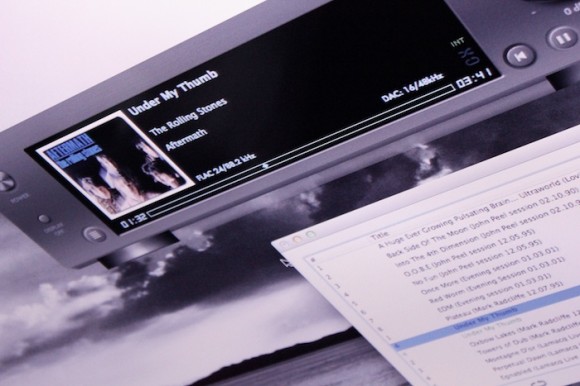 The Micromega sound isn’t as fleshy as (say) the Schiit Bifrost. It drives from a higher centre of gravity and is probably closer to the Peachtree DAC-iT: California sun-drench leads to apricot sweetness. Ya get me?  Think of the Bifrost as wheat toast and the MyDAC as a slice of white. Both equally tasty but strike the palette in different ways.

A shame then that you might not get to hear this DAC at your local dealer. As with nearly all DACs, there’d be little point. Hearing the subtle differences between decoders is a tricky business that requires your own rig and your own time. Plenty of time. Certainly, more listening time than even the most accommodating high street might extend to you.

Nearly all of the competition at the $500-600 mark bests the Micromega on aesthetic appeal. BUT…get past its ABS plastic case and this small box from France might well wow you for it ranks as one of the better entry-level decoders – up there with the Audio-gd NFB2/3 and Schiit Bifrost. I’d peg it as sweeter and smoother than both. However, it’s not as meaty as either, particularly the Schiit. Anyone with an entry-level tube push-pull (e.g. Ming Da) should pay attention here. The MyDAC is ideal for those with systems that err towards an over-congealed state. 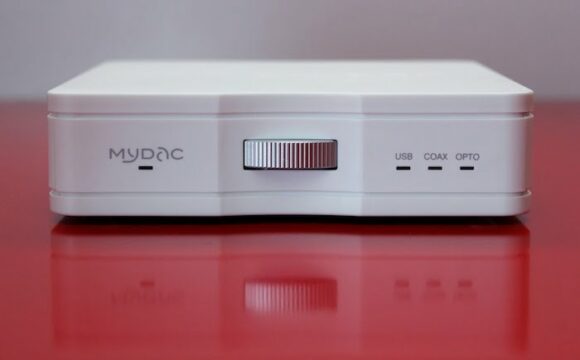 Wrap.  If you’re intrigued by the MyDac – and you should be – buy it, live with it for a while, lend it to a friend, host your own A/B comparative listening session, draw your own conclusions and then – if you don’t like it – sell it on. I’d wager that few buyers would get as far as this final step. And if they do, it will be in order to move up the DAC food chain to something considerably more luxurious.

Reviewers don’t get to call in advance what will become legendary (and what won’t). That’s for the buying public to decide.  The Micromega MyDAC probably isn’t a game-changer or a future classic. However, it is a superb entry-level unit, no doubt as Micromega intended at the drawing board. If you prioritise separation, layering and a recording’s ambient information then y’all should go forth and multi-buy. 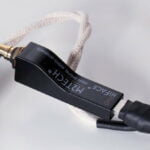 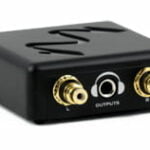