Ready? My interactions with Taiwan’s KingRex UD384 started back in February 2012 with coverage of the UPower battery back.

Steady? If you’re interested in the story so far with USB-S/PDIF converters take a ramble through digital audio transports, which was penned back in March 2012.

Go!  KingRex’s UD384 (US$479) is a DAC and USB-S/PDIF converter in an aluminium shell that easily sits in the palm of the hand. On one side, a Type B USB socket and 2.5mm jack for DC power. On the other, twin RCA outputs for routing analogue signals to one’s amplifier as well as a single S/PDIF output for routing digital to an external DAC. It’s a twofer! 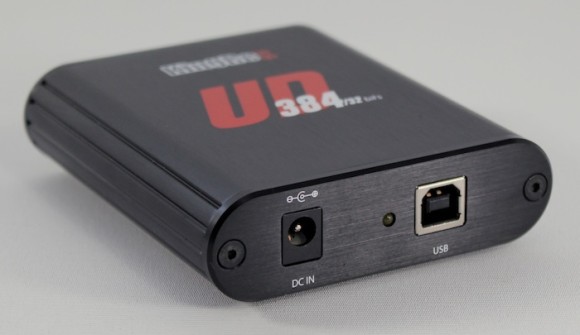 The UD384 doesn’t get its go-juice from the universal serial bus (USB). Instead, it is direct powered by a 7.5V DC switch-mode power supply unit or the optional U-Power battery unit (reviewed here), itself taking a 7.5 DC feed from its own SMPS. USB is asynchronous – check. You need drivers for Windows, OS X is plug and play. Firmware is user upgradeable. Regular updates are announced via notes on KingRex’s Facebook page  which in turn re-direct one’s browser to their Skydrive page from which both Windows and OS X firmware upgrade tools can downloaded. Christine Wu of KingRex regularly emailed with news of the same, the implication being that firmware updates could improve the sound quality of the UD384. I twice updated my unit to the latest firmware without issue on OS X Lion.

There is a common misconception among some digital audio newcomers that DDC is just that: format conversion between USB and S/PDIF. Whilst it does indeed carry out such a re-wire there’s more to this story. There’s a plot thread named ‘clocking’ in which the DDC extracts audio data from the host computer which is then clocked before being sent onto the third-party DAC. That clocking procedure is critical – any timing errors (jitter) can result in a degradation of sound quality.

Reviews that make no mention of music have no soul. This is one such missive. The evaluative statements that follow are the culmination of six months’ domestic listening and not from several beard-stroking sessions in front of reference recordings. The KingRex UD384 was deployed (both with and without its UPower companion) with a plethora of gear (WLM, Red Wine Audio, Trafomatic Audio, PSAudio, NAD), but predominantly a Sansui AU-517 integrated driving Usher S-520 standmounts (a glorious budget one-two). The UD384 was chained as a DAC between MacMini and amplifier with QED USB cable and Black Cat Morpheus interconnects. A Black Cat Silvertstar was used when testing the KingRex’s prowess as a DDC. Audirvana Plus (US$49) is my current preferred OS X player of choice. 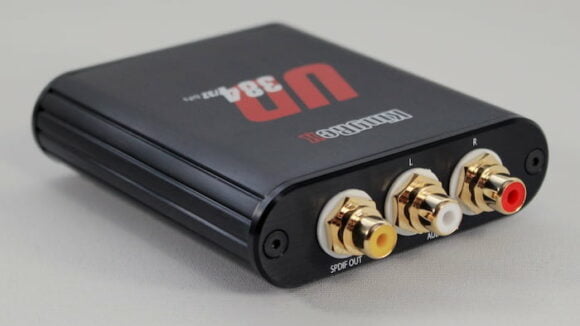 DDC listening. Ninety-nine point nine percent of my FLAC library is encoded as 16/44. The UD384 was first formally pressed into hi-res conversion territory in exposing the sound quality shortfall between USB and S/PDIF on the recently reviewed NAD C 390DD amplifier. Said shortfall is every USB-S/PDIF converter’s raison d’être: to give one’s direct USB DAC input the heave-ho because, invariably – and especially at the lower-end of the DAC market – it probably won’t sound as definite or as rich as a quality S/PDIF feed. PSAudio’s MKII iteration of their PerfectWave DAC bucked this assertion. Running USB-direct sounds every bit as good as a (re-)clocked digital signal from Synchro-Mesh or UD384.

A USB-S/PDIF conversion box that sounds comparatively weaker than the USB-direct lassoing of DAC to host computer must surely be adding something unpleasant? If so, stay away. No such detriment could be heard with the KingRex/PSAudio pairing. USB-direct and UD384 S/PDIF diet sounded identical. In this PSAudio context, the KingRex is surplus to requirements. When dropping $4K+ on a DAC, the listener would rightfully expect the need for a (budget) DDC to be redundant. I could discern no improvement in adding the UD384-as-DDC to the PerfectWave decoding mix. 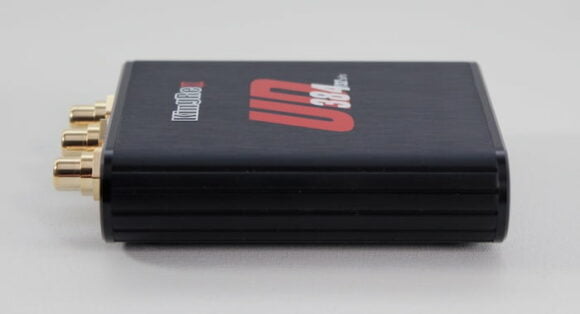 As a DDC, the KingRex unit will only parse signals up to 24/192. This limit is not a KingRex engineering compromise, it’s an upper boundary brought to the yard by the S/PDIF protocol itself. The UD384 is galvanically isolated against EMI and other power supply nasties by a pulse transformer. Two years of hands-on experience with the Squeezebox Touch tells me that it isn’t just jitter that renders it inferior as a transport to good CD spinners. John Atkinson at Stereophile measure the jitter output of the Touch to be impressively low. One can only surmise that there must be more foes to fight than jitter alone. Electrical noise remains a fundamental issue in digital audio – but that’s an issue for engineers to solvet! Pulse transformers aren’t just there to impress armchair audiophiles – they work in practice. A couple of years back, I recall several Squeezebox owners raving about a pulse transformer mod to their Classic models.

A slew of impatient (ha!) reader emails on how the UD384 fares with USB-S/PDIF conversion when sat next to the Audiophilleo2 or JKSPDIF puts me in a quandary. With neither rival in my current possession it’s impossible to offer side-by-side comparative opinion(s). BUT…a review’s gravitas is diluted when direct comparisons with similarly-priced rivals aren’t made. Consumers want to know which is ‘best’ – yet that B-word is so personal and (ultimately) so divisive. I see my job as the disher of the dirt on qualitative differences. This leaves the reader to interpret that which he might prefer for further investigation or – in geographically isolated spots – buying sight-unseen/unheard. The latter action is nearly always my recommendation. 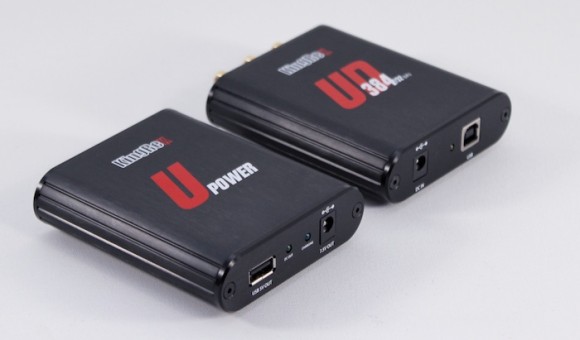 April 2012.  The Audiophilleo and JKSPDIF ran side-by-side with the UD384.  Since then, the JohnKenny JKSPDIF and Audiophilleo2 have both given way to a Redbook-only Synchro-Mesh from Steve Nugent’s Empirical Audio stable. It’s tough to split this pack. The UD384 isn’t quite as midrange-liquid as the Synchro-Mesh, but it handles higher sample rates. It isn’t quite as tonally vivid as the Audiophilleo AND it relies on an external power source…but KingRex’s own UPower addendum is a cheaper gateway to battery powered clocking than Phillip Gruebel’s PurePower-modded Audiophilleo units. During my listening tests, the UPower did indeed sweep away a layer of background hash. And it dials in more black.

Removed from the context of competition, the UD384/UPower combination still admirably achieves that which one might expect. It allows the listener to sidestep many of the traits of weaker DAC-side USB implementations – tonal dilution, greyish cymbals, limp bass – but the improvement delta isn’t as emphatic as per the JKSPDIF or AP2.

If your heart is set on battery-fuelled DDC, I’d still recommend the JKSPDIF MK3 as long as you don’t lean on it for movie watching – sound runs out of sync with picture. Based around a modded M2Tech Hiface, its two separate clocks feel more intuitively purist than KingRex’s mono-chip approach. The KingRex works all its conversion tasks through one single chip – yes, both DAC and DDC are handled by a unified ‘system on a chip’ (manufacturer unknown). When pressed further about its design and designer Christine Wu kept schtum. Pop the lid and chip source/type identifiers are nowhere to be found. (This silicon’s provenance is a mystery waiting to be solved by those with more time than I). 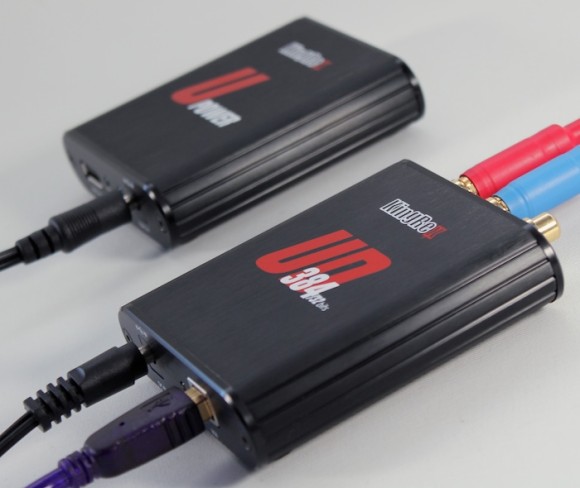 DAC listening. The drop from PSAudio to KingRex caused no immediate increase in listener anxiety. More prolonged listening exposure to the KingRex as D/A converter eventually gave up its shortcomings. Compared to the bigger, bolder American resolution and ‘jump factor’ took the most noticeable performance hits. Punching in the sub-$1000 field, the UD384-as-DAC performance is broadly commensurate with others at this price point. Broadly.

The Schiit Bifrost and Audio-gd NFB2.-1 both still pip the KingRex to the post when it comes to best-in-class Redbook sound. The former is warmer and the latter is fatter. Captain KingRex sits closest to the Audio-gd’s sound but comes up slightly short on soundstage depth and serves up a soupçon too much razor-incision on transients. These are minor complaints for sure.

Those with source material that stretches beyond the more common hi-res ‘standard’ of 24/192 will need the KingRex. At time of writing, it’s the only (?)  32/384 wrangler in the sub-$500 field. More dollars are required for 32/384 units from M2Tech, Zodiac, MSB and Playback Designs. Whilst there isn’t an abundance of such material out in the wild, there’s sufficient for those who like to push boundaries and/or listen at the upper limits of what’s currently achievable in the digital audio space. Norway-based 2L Recordings have a small selection if you’re keen to dip your toe in the water. Highresaudio.com also offer a VERY small selection, but none that align with my musical tastes.

Wrap.  You won’t buy the UD384 if you want the VERY best-in-class DAC or DDC. It’s pipped on the margins by some impressive competition in both spaces. You will buy this because you want the UD384 for exactly what it is: a best bang-for-buck, portable two-for-one unit that gives you close-but-no-cigar performance with each conversion method. It’ll serve as a neat sonic upgrade to your existing budget DAC at home and then doubles-up as a portable DAC for time spent travelling. In aiming for two birds with one stone, KingRex’s UD384 strikes close to bullseye on both, whilst the UPower is a worthwhile upgrade for down the line. 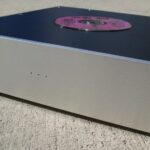