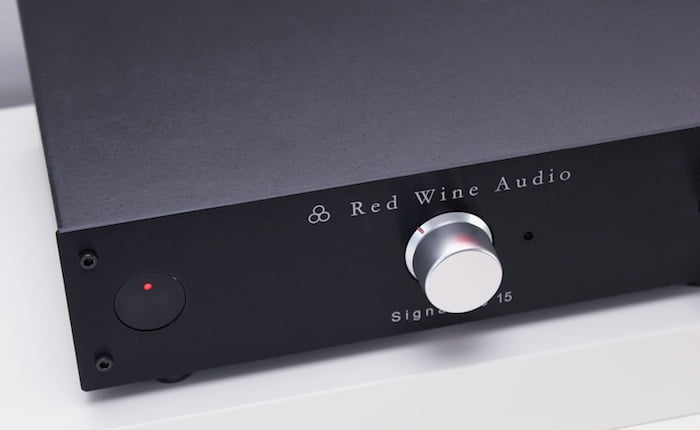 October 2011, Rocky Mountain Audio Festival. Red Wine Audio’s Vinnie Rossi is showcasing his new budget integrated. US$1500. Firmly priced for tough times. Would there be a catch? Kinda. 15 watts per side is where it tops out. Maggie rock n rollers have nothing to see here. High efficiency speaker sorts should prick up their ears. Owners of Zu, Hoyt-Bedford, Omega, WLM or Tekton – that means YOU! In the Denver Marriot hotel room, Rossi is kicking it with Nine Inch Nails – Signature 15 roped to WLM La Scala standmounts. A tonally and dynamically impressive pairing; something that ain’t as common as you might expect away from the high-end. 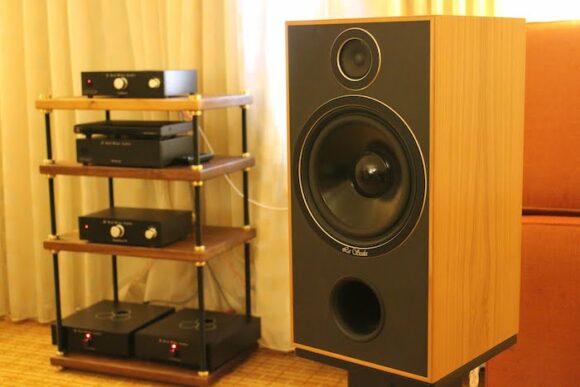 June 2012. Hand-made in the USA, this smallish integrated finally makes it to Camp Darko. Despite this being his entry-level amplifier, Rossi hasn’t taken the short-cut to higher margins by outsourcing the assembly to a Chinese production line. The Red Wine gear is all made by hand in a small facility (in Connecticut). 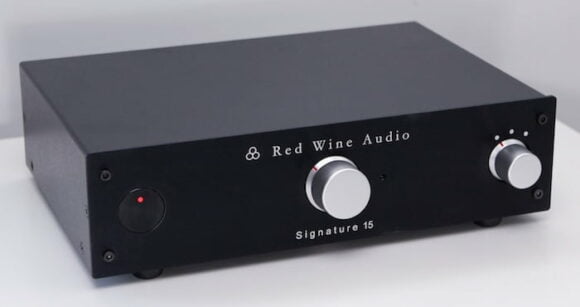 Form factor. The Signature 15 could slot easily into any system (assuming the juice is sufficient). It’s good enough for most folk’s main rigs. I ran it with the price commensurate Zu Omen bookshelves in mine. High(er)-enders might even see this as a handy standby unit or something to fuel their second system. Dimensions 30 cm (W) x 25 cm (D) x 7 cm (H) lend the Signature 15 a ‘go anywhere’ vibe. Home office users can plonk their monitor on top and not worry about case damage or the unit over-heating. This amplifier barely breaks a sweat during normal operation. On the desktop, the volume pot would be within arm’s reach and 15 wpc would be ample for near-field listening of more challenging loads. I ran Well Rounded Sound’s (bottom-of-their-range Yorkies) and not once wanted for more beyond midday on the dial. 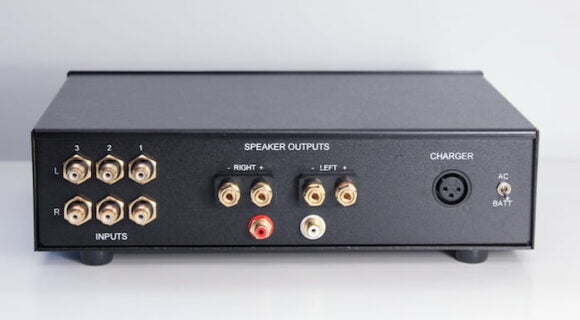 Multiple inputs. Doesn’t the Signature 30.2 have only ONE input as standard? Yup, it does. The baby brother’s got three. ‘Nuff said.

Subwoofer output. Low-frequency dial-in isn’t to everyone’s liking but if you’ve got the need for an active subwoofer then Rossi’s got you covered with a line-level output.

Off-grid listening. Battery power is the jewel in the Red Wine Audio crown. Instead of paying for a huge/expensive toroidal, you get Vinnie Rossi’s clever-clever LiFePO4 battery power design. Like every other product in the range, the Signature 15 can be completely isolated from the mains (noise) with a flip of a rear-mounted switch. Does that make you feel a bit of a chump for dropping $3k on that fancy power cable? Hard to believe that this integrated will also run you LESS than that fancy power cable. Used to hash brown background? Not here sunshine. The Signature 15 offers mere mortals a taste of that blacker-than-midnight-in-the-desert background. OR you could take it on a camping trip.

Auto-charging battery. You’ll get approximately six hours of solo-battery listening before the power LED flashes to warn you that it’s nearing depletion. Flip it back to “AC” on the rear and keep on trucking whilst it recharges. Of course, you can listen this way all of the time: the mains power feeds the battery and the battery juices your speakers.

Hybrid design, Tripath no more. Like the Signature 30.2 LFP-V Edition (which I dug A LOT), the pre-amp section is tubed-up with a 6922/E88CC. The stock bottle is a JJ – it sounds nice – but tweakers can easily take sonics up a notch via tube rolling. More arrestingly, the Signature 15 dispenses with a Tripath chip (still found in the 30.2) and runs with Rossi’s own (new) special sauce in its output stage: discrete Class A/B transistors. Going on audio memory alone (oh dear), the Signature 15 isn’t as propulsive with lower frequencies as the Signature 30.2. It’s also a shade more romantic. There’s just enough vapour trail on instrumental decays to keep valve lovers happy, just enough self-discipline with micro-dynamics and cleanliness to enchant solid-state fanciers. 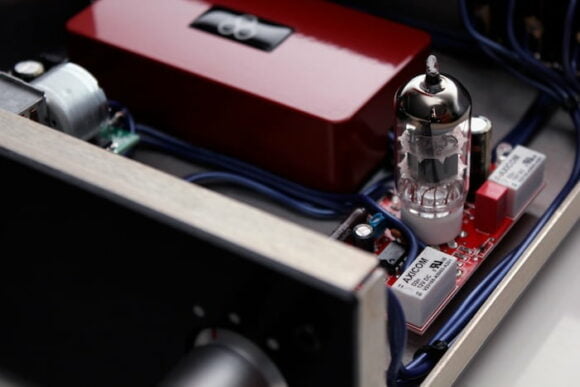 Hey Vinnie! What prompted the move from Tripath to your own design?

VR: “In late 2010, we came out with the LFP-V Edition upgrades for our products. This consisted of an all-new LiFePO4 battery pack as well as a Class A tube input stage. This elevated the performance of our two Tripath-based designs (the Signature 30.2 and 70.2 monoblocks) to a much higher level. But a few years before that, the Signature 30 and Signature 70 amplifier boards were refined with the 30.2 and 70.2 upgrades. So I was really at the point (after releasing the LFP-V Edition upgrade) where improving the sound would mean breaking away from digital (Class-T) and migrating towards a less efficient Class AB MOSFET output stage. Luckily, the LiFePO4 battery pack offers more current than our older SLA battery, vastly superior cycle life, ability to play/charge at the same time with the flip of a switch, and greater energy density (takes up less space) so I now had more space to play with inside for the the tube input stage, and a different output stage.” 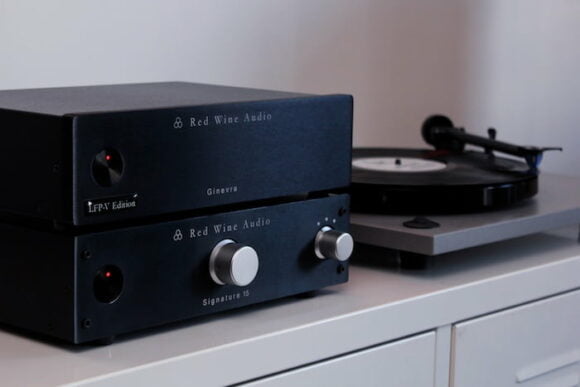 JD: What can you tell us about the new output stage and/or amp topology?

VR: “It is a Class AB FET design, with all heat-sinking to the bottom of the enclosure. While it is less powerful than the 30.2 (Tripath is a variant of Class-D, which more efficiently uses the battery voltage to create more power), this Class AB output stage offers twice the power into 4-ohms – giving higher output current and more linear wattage in that there is no high-frequency switching and output filter to recover the audio spectrum from. So there are fewer parts in the signal path, no ultrasonics created from high frequency modulation, and lower distortion.”

“I knew there would be an output penalty to take (using the same battery voltage) compared to Class T, so I wanted to make sure that was traded in for enhanced sonics – a more extended top-end with improved micro detail, and more dynamic presentation (within its power range), while still retaining the warmer, tube-like Red Wine Audio “house sound.” 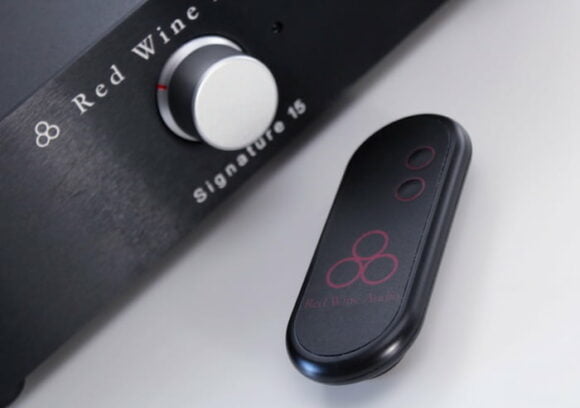 JD: With which loudspeakers did you voice the Sig 15?

VR: “I was able to listen to a variety of speakers approx. 90dB sensitive or greater, such as the WLM La Scalas. I receive a lot of emails asking “I have X brand Y model speakers with Z specs (where Z specs are less than 90dB sensitivity and impedance that goes below 8-ohms) – will the Signature 15 be able to power them?” The important thing to know to answer this is “how loud do you play your music / why kind of music do you play /how large is your room?” Because the fact is that 15 Wpc is not a a huge amount of power, but it can still drive speakers that are, say, 87dB, 6 ohm nominal very well if you are not the kind of person who likes to play complex music at LOUD levels, but still content with a respectable level of volume – and the benefits that simpler, lower-powered designs can bring to the table. But if you want like music to hit you hard and live concert dynamics, higher efficiency designs are a must. And you don’t need to think only single-driver, horn speakers. There are many higher efficiency two or three way models out there at all kinds of price levels – so the remaining factors are the listeners personal taste, the listening room, and how well everything works together.”

Rossi’s own assertions about the Signature 15’s ebullient top-end are bang on. Its more insistent treble suits the 98db Zu Omen bookshelves to a tee; the Red Wine unit restores some air to the mix which allows the Omen to expose plenty of detail but with greater refinement. And transparency. Let us not forget transparency. My usual Zu partner – a vintage Sansui AU-417 – is more murky/opaque. The Signature 15 pulls open the ribcage for the listener to witness the heartbeat and guts of music. Sound levels can also get LOUD with Zu partnering. 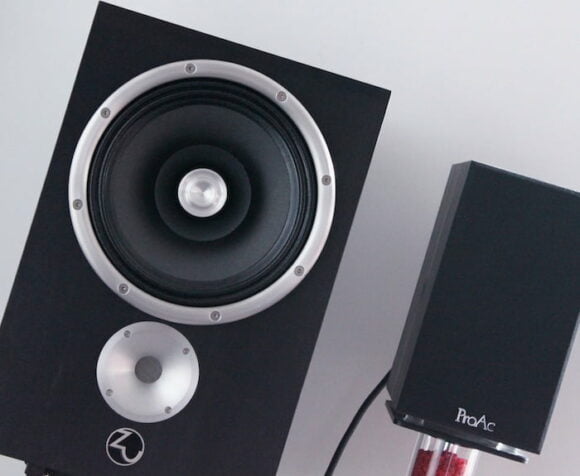 You’d assume that higher SPLs wouldn’t be the possible with 85-86db ProAc standmounts (Tablette Reference 8). And you’d be flat wrong – 15 wpc riding on a high current delivery vehicle means one doesn’t need to push the volume pot past 1am. You’d also assume the bass would turn to porridge, especially with the more demanding lower frequencies of L.S.G. “Netherworld”. It doesn’t. The compromise made with the RWA/ProAc combo is with dynamics; the Signature 15 doesn’t quite capture the more visceral shifts of the Sansui integrated. Near-field listeners probably won’t notice. Or mind.

That said, the Signature 15 is capable of far more than the specifications sheet would have you believe. It isn’t as grunty as the aforementioned Sansui but that’s not its modus operandi. Instead, think perspicacity and rarefaction with the added ability to dispense jumpy micro-dynamics (as well as bigger macro swings on more efficient transducers). Talking of which…

July 2012. What’s sauce for the goose. Red Wine Audio Signature 15 paired with WLM La Scala (93db floor standers) – a loudspeaker that’s neutral to the point of being initially misread as boring. It’s not – it’s just less rose-tinted than Zu-land. With the La Scala you get to hear precisely what you feed ’em – no added flavour enhancer or MSG. Quite an adjustment having come from Zu Omen and (to a lesser extent) ProAc standmounts. Think of the La Scala as an upstanding gentleman, long on politeness and short on personality of his own. 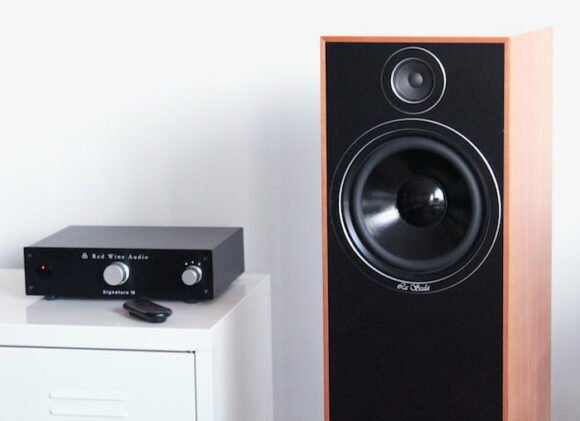 The volume pot requires more clockwise turn than when pushing Zus. No biggie. In the amplifier comparison game numbers are deceptive. At a lowly 12 wpc, the recently raved-about Audion EL34 Sterling amplifier has a better handle on bass – and it rules the aforementioned ProAcs with a tighter fist. That’ll likely be the benefits of a hand-wound transformer recipe. The EL34-er also has the edge with harmonic elegance and vapour trail decay. But, but, BUT…it’s how close the Signature 15 gets to the Audion with tonal and textural information retrieval that colours me impressed. It gets REALLY close. Even more so with the Red Wine integrated running in battery mode; which sees it nudge out the Audion for background tranquility. Prefab Sprout’s Jordan: The Comeback is chock full of lush arrangements and silky vocals. Lesser amplifiers harden this tenderness. Not the Audion. And neither the Red Wine Audio Signature 15. The kicker? The latter will run you half the dollars of the former. That’s half the (Audion) money for 80% of the performance. Crude mathematics, yes – the spirit of which is tough to ignore.

Price. Wallet damage is where all of the above finally coalesces into one tidy, economical package. A superb-sounding integrated that immediately nullifies doubts about mains power quality. The casework might be more workaday than Rossi’s other models but that’s all part of keeping the price down. At AU$1500 – yup, local price at parity with Rossi’s direct sell US RRP – trophy hifi for snobs it is not. You’re only shelling out for the things that matter. (Prospective) owners will likely thumb their noses at more expensive schlock. Rossi’s shift from Tripath to Class A/B for their entry-level integrated might have seen a halving of nominal power output but it’s also shaved a grand from the price. Said move has subtracted nothing from musical engagement/enjoyment. Win win. Loading the syringe for a conclusive hit: the Signature 15 mainlines refinement and musical engagement. Intoxication + affordability = addiction. Such audio drug-running can have only one final destination: DAR-KO award. 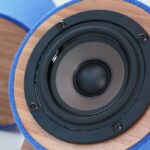 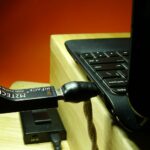