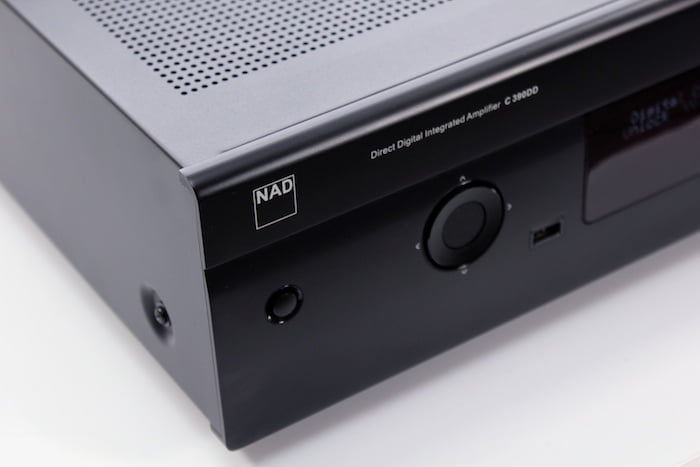 Like the M2 before it, NAD’s mandate with the C 390DD (AU$3000) is obvious from the get go: digital with a capital D. The rear panel says it all: NAD have dispensed with analogue input options – unless you purchase an optional slot-in module – so that the stock C 390DD’s inputs are ALL digital: 2 x coaxial, 2 x optical, 1 x AES-EBU and USB (Type B – for your computer). There are also front- and rear-facing USB slots (Type A – for external hard drives and USB keys). Digital source connectivity options are comprehensive. All USB inputs are buzzword compliant (“asynchronous”) and top out at 24/96. S/PDIF digital inputs can handle up to 24/192.

There is no separation of church and state with the C 390DD. However, do not think of this as a DAC and amplifier housed in the same chassis. It’s more than that: DAC and amplifier are fused together (as one). Think of it as a DAC that amplifies.

Once ones and zeroes are fed into the unit, some serious processing takes place. Purists might wince at NAD’s compulsory conversion and resampling of the incoming data stream. PCM (Pulse Code Modulation) is re-sampled to 844 KHz and converted via DSP to PWM (Pulse Width Modulation). This PWM controls the output FETs. The FETs feed your speakers. There are no analogue gain stages anywhere inside this unit. None.

‘Direct Digital’ is what the spin doctors at NAD call it. This technology has trickled down the product line from the much-fancier looking and much more expensive M2 (AU$7000). Understandably, the C 390DD doesn’t have the trophy cabinet high-end looks of its bigger brother; the C 390DD chassis puts functionality ahead of aesthetics, presumably to keep manufacturing costs down.

From the M2 product page:

From the C 390DD product page:

“Boasting a healthy rating of 150 watts per channel with nearly immeasurable distortion and noise, the C 390DD can effortlessly power demanding high-end loudspeakers. The C 390DD has no analogue stages in the signal path, keeping the music in the digital domain right up to the speaker outputs. This is a true digital amplifier, or more accurately, a DAC that amplifies. All preamp functions are executed in the digital domain without the phase shift, noise and distortion that plagues all analogue designs regardless of price or pedigree.”

The aforementioned DSP unit also handles the C 390DD’s bass/treble adjustments and room equalisation test tones, which the user can use to attenuate individual frequencies by ear. However, at time of writing, the latter had yet to be fully implemented – it will require a future firmware update. NAD have been insisting that M51 DAC firmware updates are done by approved dealers; it will be interesting to see if this also applies to the C 390DD.

Other nice things about the C 390DD: the display informs you of the sample rate of the incoming signal and the user can specify (via the menu system) the loudspeaker impedance. 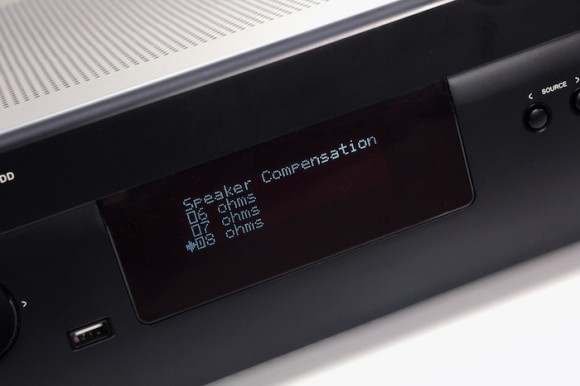 I have to admit it: my initial expectations were low. When the NAD box arrived I thought I’d already managed to juice the (cough) ‘best’ from the recently arrived WLM La Scala floor standers with either the Red Wine Audio Signature 15 and Audion EL34 Sterling (and PS Audio PerfectWave MKII DAC). Granted, these both work their magic from the lower power output end of town but they both know how to seduce a listener; and the WLMs are of higher sensitivity. The NAD doesn’t walk this way. Its ‘best’ is less lap-dance and more straight talking; and oh my, so many BIG words! There is no sign of pronounced midrange eloquence (Audion) or the tonal finessing of Vinnie Rossi’s integrated. Cat gets early mark from bag: the NAD is more uniformly conservative with voices. 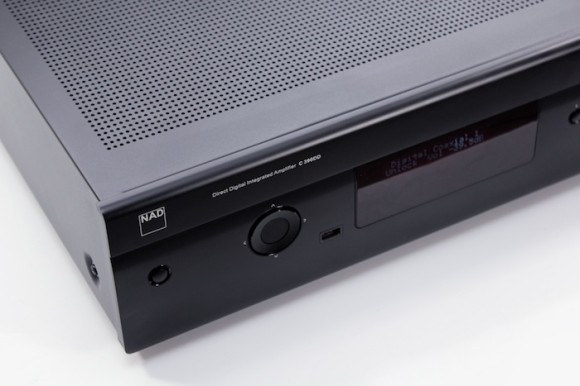 Matthew Sweet’s ability to juxtapose the tenderness and roar of heartbreak makes his Altered Beast album a right proper rollercoaster ride. The jumpiness of (ex-Television) Richard Lloyd’s hard-panned guitar was arresting. Moreover, the tonal qualities of the guitar squall and the precision of its placement made me sit up and pay strict attention. The expected arms-length emotional engagement didn’t materialise (the C 390DD is impossible to ignore). Instead, sweetness and DETAIL. The combination of huge swathes of musical information tinged with tip-of-the-tongue sucrose was so compelling I sat listening for too long, lost track of time…and was late for work. Whoops.

Later that night, Low’s Things We Lost In The Fire and Radiohead’s Kid A. Again: more detail than I’d hitherto witnessed from any DAC-amp combination at this price point. More textural information too – a guitar string sounds closer to the real thing – and better spatial cues that improve soundstage depth and player location. The storm of horns that close Radiohead’s “National Anthem” were superbly separated and moist horn blat could be clearly discerned. No dryness here. Low’s hushed and fragile recordings surrendered more air and acoustic decay giving rise to a better sense of the room/space in which they were recorded. With Alan Sparhawk’s voice closely mic’d and then panned firmly to the right channel, one could clearly and cleanly hear every (heart-)beat of the distant drum that sat some 6ft behind the centre of the speaker plane. Three-dimensions were writ large without the need for constant dynamic theatrics, which themselves are also present and correct when called upon. The NAD won’t emphasise a quality that just isn’t there. Neutrality to the point of ambivalence. 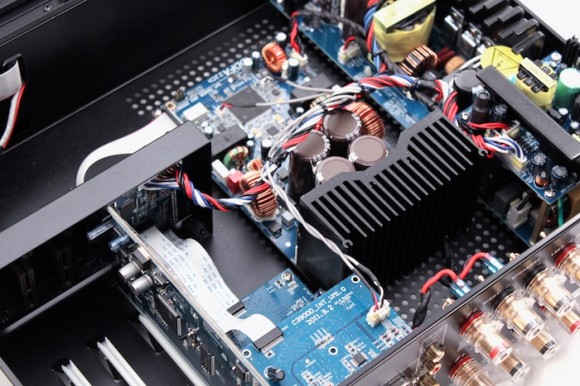 Until hearing Don’t Try This At Home by way of the NAD C 390DD, I’d rarely given much thought to the musicianship that went into making Billy Bragg’s ‘crossover’ record. With Cara Tivey’s piano given more breathing room, such myopia was swiftly corrected. The NAD again dug deep for detail and exposed the tonal delicacies of piano notes and guitar strings that sit behind Billy Bragg’s (sometimes) boorish vocal turns. Everything felt more ALIVE without resorting to the MSG hyper-taste-tingle of showier – and ultimately lesser – DACs. If I describe the NAD as accurate I’m not doing so pejoratively. If the recording is poor, you’ll know it but this ampli-DAC doesn’t connote disinfectant in a bid for cleaner resolution.

Bad news, broken gently. I’ve often called out rigidity and greyish tonal colours as hallmarks of a jitter-y sound whereas liquidity and suppleness are signs of a sound less troubled by such timing errors. The C 390DD runs nicely with the latter two qualities. Even with poor recordings one can listen with ease and for extended periods BECAUSE liquidity is so darn obvious. 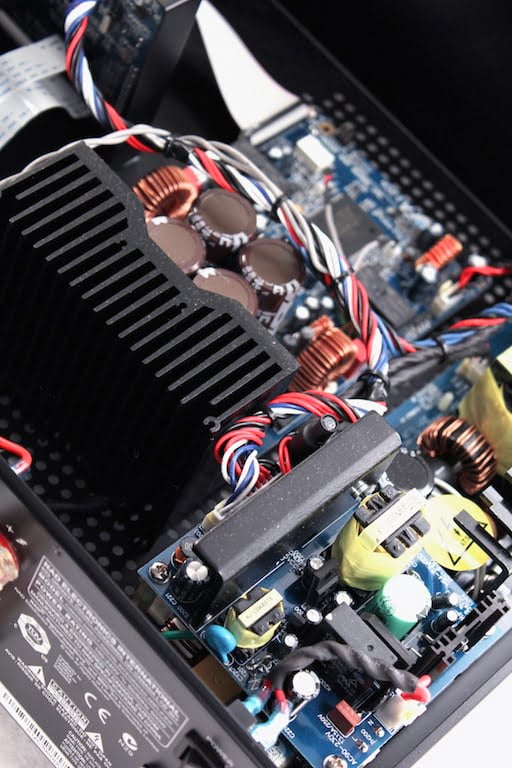 Even so, those migrating from warmer, tubular climes might find this take on music initially too stark. Ultimately, those same folk might find it captivating. Like music, can be seen as a collection of separate, brutal events or given a romantic sheen by only considering the period in question as a whole. Think of the NAD as an archeological team exposing a burial site from thousands of years ago; a delicate unveiling of something that has the potential to be unpleasant…if your collection consists of predominantly poor recordings or masters. Wherever you sit on the need for colouration, NAD aren’t giving you any. What they are giving you is a comfy chair and a widescreen representation of an historical (detail) excavation. 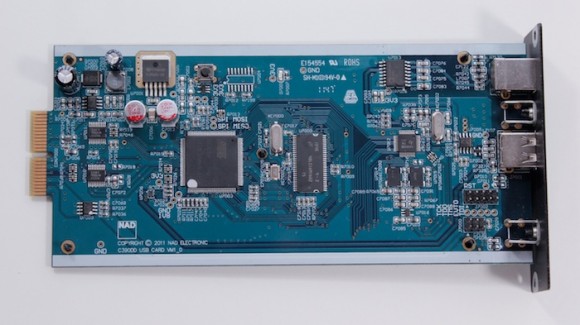 Switching transports from Squeezebox/Synchro-Mesh (S/PDIF) to MacMini (USB) reveals the C 390DD’s universal serial bus input to be less resolving and less alert than its S/PDIF neighbour. When directly compared to a 16/44 S/PDIF feed of the same 2012 remaster, even the 24/96 version of David Bowie’s Ziggy Stardust takes a hit on urgency and joie de vivre. Not even the ever-dependable Audirvana could save it. Diminished transient incision and a lack of overall visual acuity were most obvious. Bass lines showed more pant-seat sag. This USB input might make the NAD more agreeable to brighter loudspeakers but that’s an ass-backwards compromise.

Repeated listening confirmed it time and again: the C 390DD’s USB isn’t as solid or as vibrant as its S/PDIF. I reached for a KingRex UD384 – a DAC and USB-S/PDIF convertor. Digital audio newbies might think that the latter function is simply format conversion but there’s more going on inside the black box: clocking. Good clocking reduces jitter. Reduced jitter makes for a more enjoyable sound. Chris Sommovigo’s Silverstar digital coaxial and a QED USB cable completed the connection. 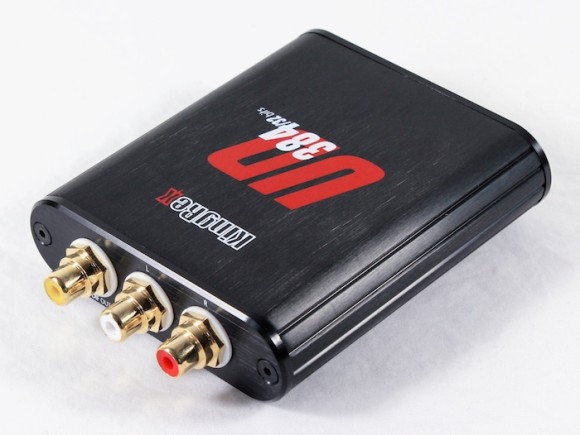 With the KingRex UD384 (US$480) dropped into the mix micro-dynamic gymnastics went up several clicks. Not quite a smooth operator as the Redbook-only Synchro-Mesh, the UD384 can convert USB all the way up to 24/192 (as per the S/PDIF spec). More importantly, it allowed the aforementioned hi-res Bowie remaster to really come into its own. Its soundstage opened up in all directions – particularly width – and the windows through which the listener ‘observes’ the scene enjoyed a thorough Windex-ing. The KingRex box also adds a healthy dose of acoustic mass over and above the direct USB link. 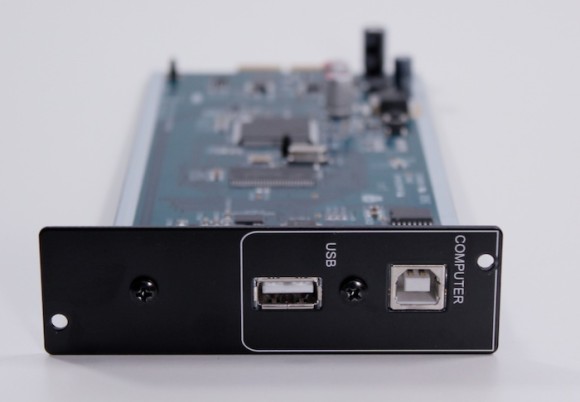 NAD’s own USB implementation is fine for casual listening or movie playback but readers are advised to spring for a USB-S/PDIF convertor if a computer is the main transport. The silver lining here is that the NAD’s USB socket is supplied via a slot-in modules. It can be upgraded as and when NAD release an upgraded board. 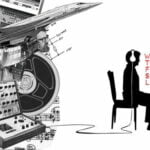 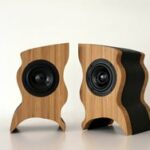