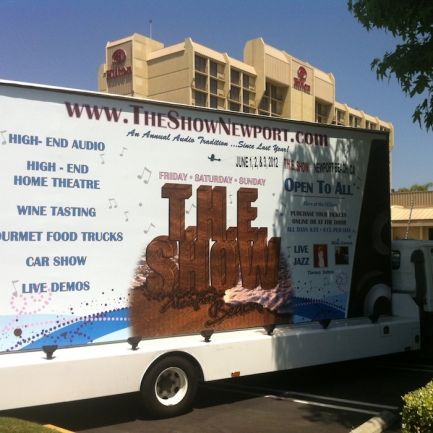 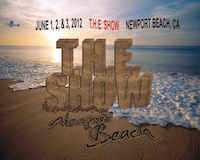 The Newport Beach show feels outright more relaxed than the Rocky Mountain Audio Fest.  Things just aren’t as intense as they are in Colorado.  A cool breeze continually wafts through through the lobby of the Hilton Irvine. On the upper levels there’s room to manoeuvre and the hallways don’t get quite as jam-packed as in Denver.  With so much exhibitor demand, the organisers must have been grinning from ear-to-ear that they got to extend into the Atrium Hotel next door.

Schiit Sandwich.  I guess it’s easier with headphone gear.  As an exhibitor, you don’t run the risk of clearing the room with esoteric music choices because they are mostly sealed away.  Mike Moffat and Jason Stoddard have awesome Schiit t-shirts – one for each day apparently – that allow the best Dad-joke in hifi to run and run and run.  They are also showing their new balanced DAC and balanced headphone amplifier (complete with non-production chassis).  I could tell you that Talking Heads’ “Psycho Killer” sounded fat and rich and warm and generally awesome behind Audeze cans but would you believe me?  After all, I have no reference point.  Let us not forget that hifi shows like this are a bit like a HUGE show and tell.  Anyone that tries to make a judgement call on X sounding better than Y is deluding themselves.  Save the appraisal for your own room/system. These hotel rooms’ sizes are no doubt tricky to work with. I doubt few exhibitors would be showing off their A1 sonic game.

But some get close (I guess).  Emotiva are demo-ing their new XDA-2 (budget) DAC in one helluva dark room.  Blue lights lend it that Doctor Who feel.  I don’t remember what music they were playing.  Possibly some non-descript jazz-fusion (there’s a lot of it about).  It sounded enjoyable and it won’t break the bank.  If you don’t have a lot of cash to drop on a system, these guys should be top of your list.

Dusty Vawter of Channel Islands audio is enthusiastic about his new DAC with outboard power supply.  Rightfully so.  It uses Wolfson silicon that – like the ESS9023 – shoves 2V straight off the chip.  Music?  Jazz?  Girl with guitar? If I don’t remember, it was obviously forgettable.  Sorry.

I spent a good chunk of time talking Audion amplifiers with Gary Alpern of True Audiophile.  He’s as enthusiastic about these as I am.  He tells me that I should hear (review?!) the KT88 or 300B instead of the EL34.  Maybe I will.  They might look fairly plain-Jane but they sound VERY nice.  How can I say this with certainty whilst only listening at a show?  I own the EL34 model.  Self-contradiction dodged.

In the Harbeth dealer room, I spy an LFD in charge of some 30.1s.  Two of my most loved brands getting it on.  Marvin Gaye-time?  Nope.  Unfortunately, it’s more jazz (fusion).  Noodle-noodle-noodle.  It’s so NICE. Some attendee pipes up that he’s “used this track 30 or 40 times over the years for testing”. Ugh. Kill me.  If you’re gonna play jazz, play the stuff that goes deep: Mingus, Coltrane, Davis, Parker.

The “Von Gaylord” sign puts a smile back on my face. Anyone from the UK (with a similar sense of juvenile humour) will know why.

And just as I was about to give up the ghost on hearing anything other than jazz(-fusion) or chick-with-guitar since the Schiit room, some guy clocks my Sisters Of Mercy t-shirt and drags me back in to listen to “Ribbons” on some large floorstanding Dynaudio. Wow. Awesome.  I don’t remember much else about the room but thank you for showing me (us!) that not every room has to run with inoffensive/polite/acoustic music and that there is an opportunity to let it get weird or to rock out. 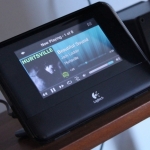 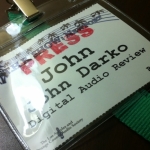