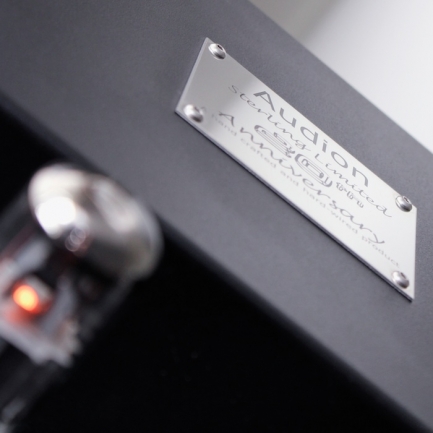 Even equipment commentators need systems that exist solely for their private enjoyment. Systems that are fenced off from critical ears, there to provide sounds during review downtime.  The Audion EL34 Sterling Stereo Anniversary started its life in my life this way: this wasn’t intended as a review unit.  (Ditto Zu Omen bookshelves). Instead, this commentary comes after six months’ gestation as this EL34-fuelled single-ender has stealthily crept from private listening system into review spaces. Now, words MUST spill.

My own cash had dropped on the basis of gut instinct and the desire for something off the beaten track. It doesn’t get more remote than Audion; a British-owned outfit (it’s www.audion.co.uk) whose production space is located near the little village of Le Haut Mon (about an hour from Bordeaux).  One of the most sparsely populated areas of France, the village isn’t even on the map. Graeme Holland (originally from Brighton) and a small team of locals (‘artisans’) build the equipment in the back rooms of Holland’s 17th Century Farmhouse. Holland even has an anechoic chamber set up in one of his barns. 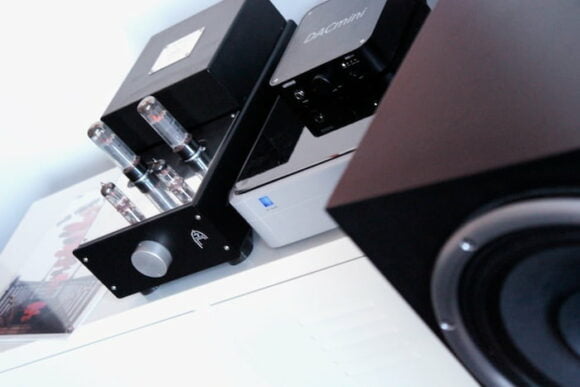 Many production processes are completed in-house. Crucially, this includes the winding of their own transformers. Audion products are hand made to the most exacting standards.  Eschewing the production line approach to manufacturing, one person makes each unit from start to finish.

Holland is (by all accounts) obsessed with attention to detail. If something can’t be done to his standards, he buys in the equipment, puts himself through a gruelling learning process and does it himself. Consequently, more and more of the processes are now carried out in house.  Case in point: Holland recently acquired a tube stamper so that he can Audion-brand his bottles. Unsurprisingly, Mr Holland is no fan of Chinese gear. He avoids using anything Chinese, all the way down to component level.  Zut alors!

Both the Audion chassis design, website presentation and (near-) indifference to advertising and promotion radiates a wholeheartedly conservative approach to business. This might lead you to believe that Graeme Holland is a stuffy, unsociable fellow… 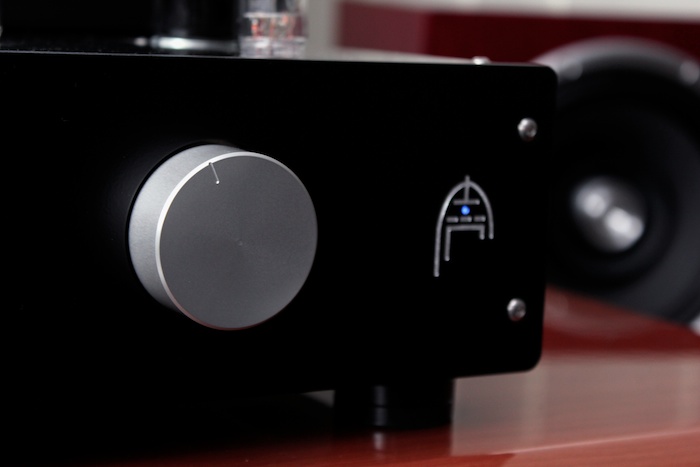 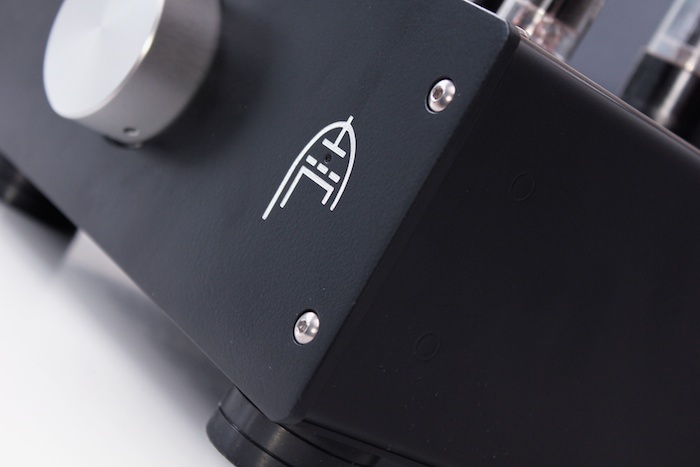 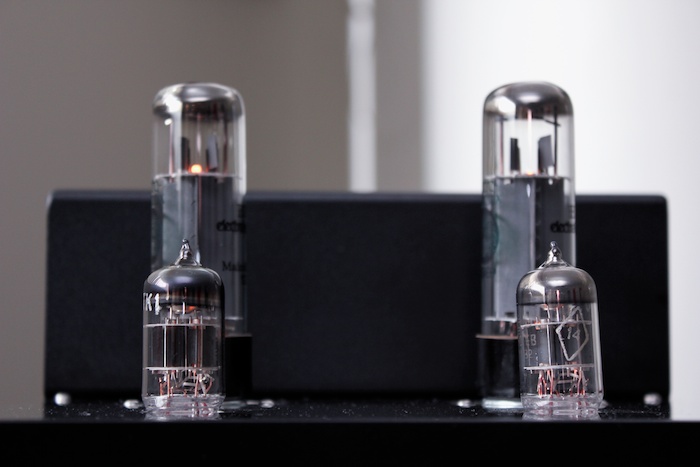 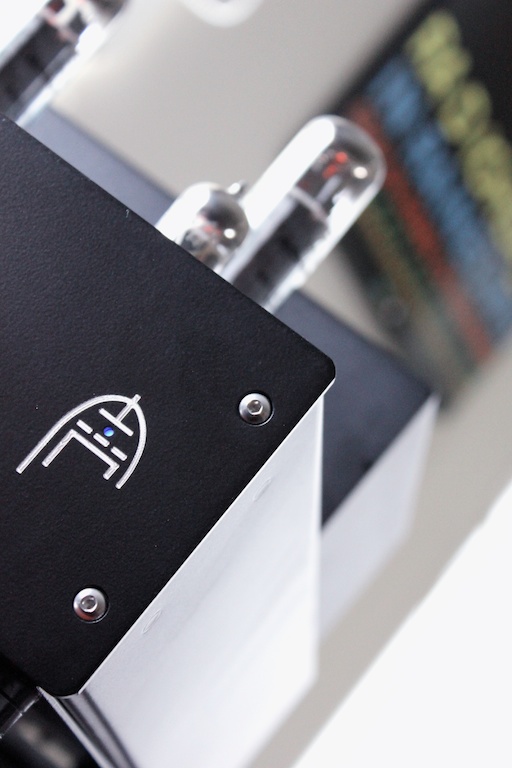 This Audion EL34 Sterling Stereo Anniversary is strictly a power amplifier.  The integrated version will run you more money. For this integrated lover, the front-and-centre volume pot made the power-purchase leap a cinch. I went for the hard-wired version (AU$3254) that sports superior components to the PCB version (AU$2452). Audion go to pains to emphasise said components are sourced from the US and Europe and NOT China. The hard-wired version also runs from a larger transformer.

On this model, Holland spills briefly: “The only magic we use in that amp is to run the pentode EL34 in ultra linear mode. It’s quite a different circuit from what most people use. Although the amp is single ended the ultra linear setup is more akin to push pull than single ended but allows the EL34 tube to give its maximum performance without electrically stressing it too much.”

What else?  It’s a half-width chassis that runs Class A. Two Electro Harmonix EL34 and Russian NOS 6H1N input tubes as standard. Biasing is automatic.  Oooh lah-laaah. Australian Zu/Audion distributor Mike Kirkham says, “Talking to him Graeme, you get the feeling he is just a brilliant problem solver.  He gets on famously with the guys from Zu. They share the same distaste for the crusty audiophile scene. There is even talk of an Audion-Zu collaboration, such is the wonderful symmetry with the products.” 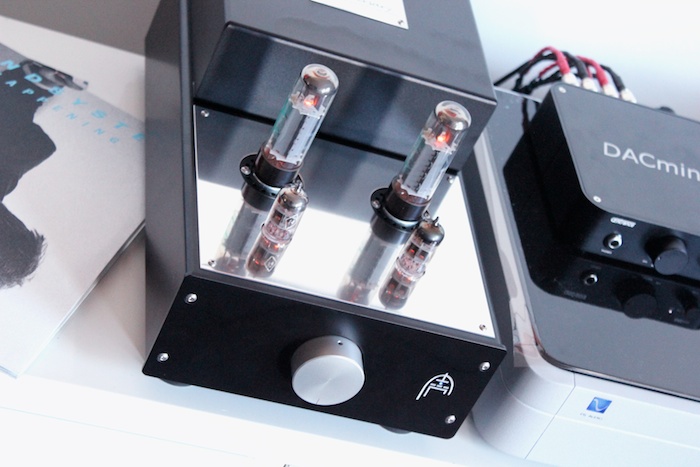 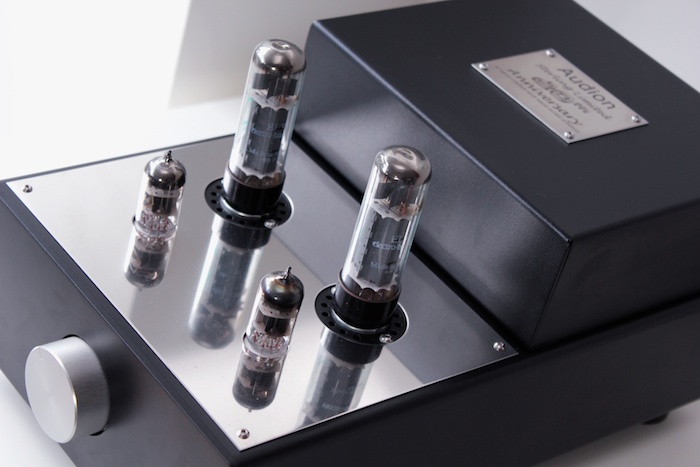 I’ve been running my own Zu/Audion symmetry these past few months. For starters, know that the Omen bookshelves are wholly mislabelled as such. Far too large for any shelf and too tall for ‘standard’ 600mm stands.  These standmounts demand to sit lower on a larger top plate.  98db, 12 ohm (nominal), US$1500.  High efficiency means big dynamics. The tweaked Eminence driver means down the throat musical insight.  Entry-level pricing means they’re in reach of everyman.  (Oh, and they’re a sealed box so bass is tighter/weaker than the floorstanding version).

Jack Ladder’s mournful Hurtsville and Bright Eyes’ bleak Digital Ash In A Digital Urn. I’ve been spinning these guys relentlessly as it rains and rains and rains through the (2012) Sydney winter.  The Audion breathers warm air into gloomy song spaces…between instruments to ensure they don’t collapse in on their bleak selves. The Audion pulls an optimistic glow against the cold (like the very best miserablism).  Moreover, the Audion beautifies: it sweeps the soundstage canvas with long elegant brush strokes. I couldn’t get the Zu Omen to sound so driven, so controlled, so clean with other amplifiers (Miniwatt N3, Rega Brio-R). With a Naim Nait 5i, the Omen showed sharp transient nails – unlistenable.

Prior to Audion arrival the (recently reviewed) Eastern Electric M88 had been the preferred Omen dance partner. Airy (and far from murky), the UK/French unit surrenders not one jot of the KT88’s drama whilst adding a spoonful of elegance. Not honey, but sugar syrup. Think Diet Coke instead of Coke.

Implemented well, 12 watts per channel go a LONG way. Holland’s unit took charge of almost every loudspeaker leashed to its mast. Is this the ultra-linear operation (unusual for single-ended designs, normally found in push-pull amps) doing its thing? Probably. The Audion might’ve struggled to steady the bass boat on a buddy’s pair of ProAc 1SC clones, but there was no such seasickness with my very own ProAc TR8s. 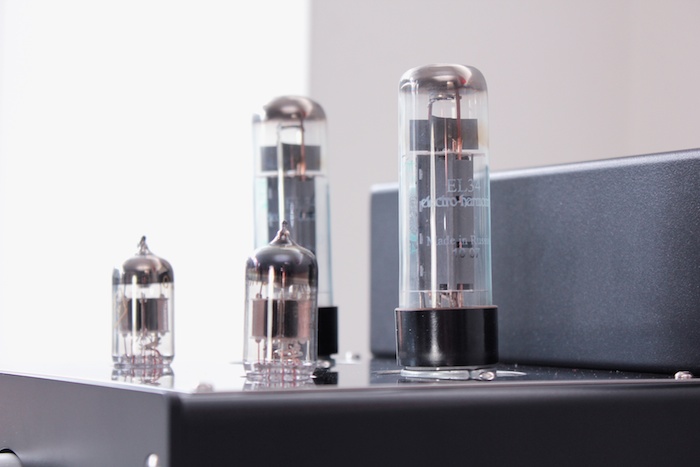 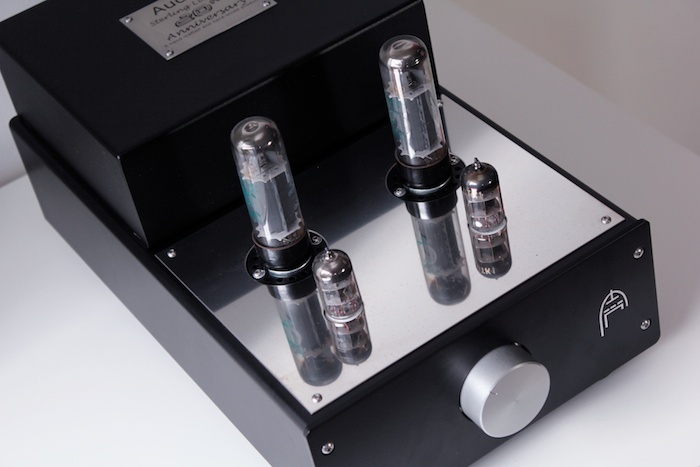 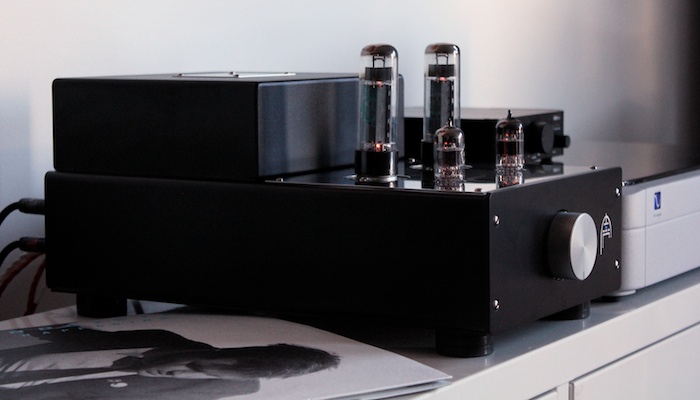 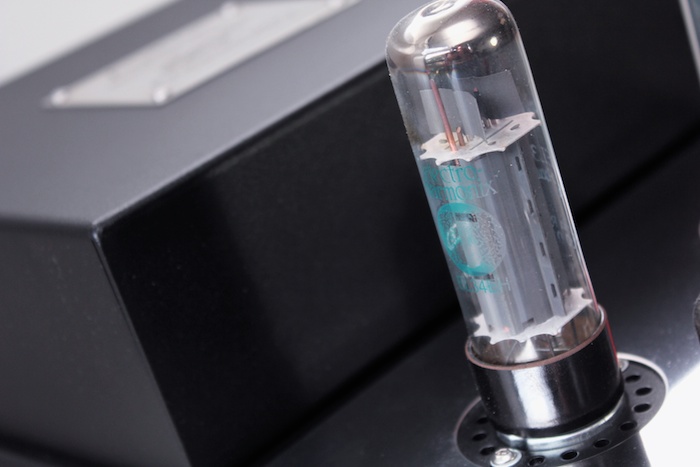 May 2012.  Originally working as solo unit – source direct from both DAC and phono stage – an Audio-gd Reference 10.2 was added for (remote-controlled) pre-amplification. This latecomer brought directness and exactitude whilst withholding a soupçon of delicacy. Purists might wince but with volume attenuation on pre and power boxes, one could choose to mix/match to taste.

I can’t believe it’s not butter. You won’t hear much evidence of fattening or colouration from this tube-r. If Graeme Holland adopted more aggressive copywriters they’d probably opine that “It just sounds like music”.  Cliched?  Terribly so.  True. Certainly. This power amplifier’s lack of flavours plainly demonstrates that not all valve amplifiers stir in a dollop of fat. 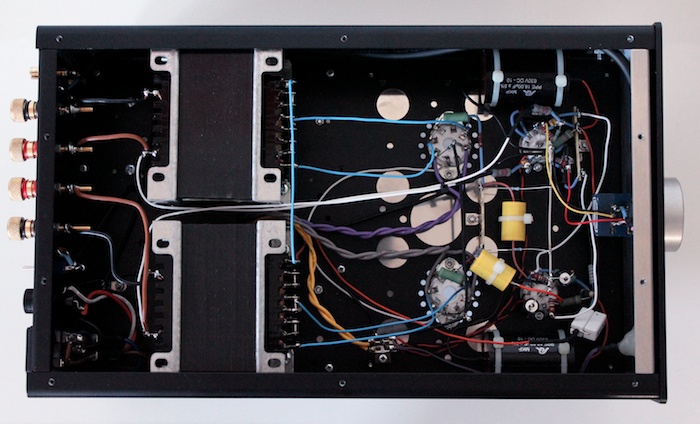 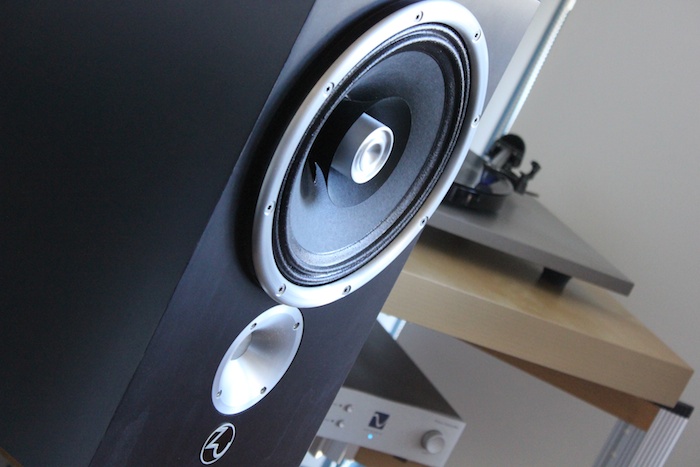 More seasoned audiophiles will know that good amplification – no matter the topology – has no sound of its own.  Don’t expect the thick syrup or golden hues of sub-$1000 Chinese units.  There is no sickly/heavy sauce here.  Neither is there porridge bass. Who said tubes are no hopeless below the waist? (Fools!) This Audion is the healthiest of extra virgin olive oil: light, transparent, clean.  And fast.  It is unburdened by ponderous, labouring low frequencies or musical weight gain.  Its talents lie in 1.  the ability to drive a wide range of loudspeakers and 2.  the beautification of music.  It’s punchy with ProAc standmounts (TR8s), zings with the (more efficient) Zu Omen and it has enriched the otherwise over-polite Epos (ELS-8).  Each combination a winner.

For yours truly, it is with the Zu Omen bookshelves that the Audion EL34 finds its ideal mate. Never showing signs of bass sag or an inability to duke it out at higher SPLs, these 98db standmounts paint with rich, fast tonal colours and hugely expan
sive soundstaging.  There’s just more wand wave when Zu meets Audion than under the more straight-laced Rega Brio-R or Sansui AU-417 spells.

The ultimate praise (here) for the Audion EL34 amplifier stems not from just from the above descriptors but from the amount of time it has spent mingling among review party guests. It hasn’t been subjected to the churn of new gear. I’ve not wanted for anything different. Not an amplifier for instant gratification but one for long-term satisfaction. A life partner. A trusty steed. 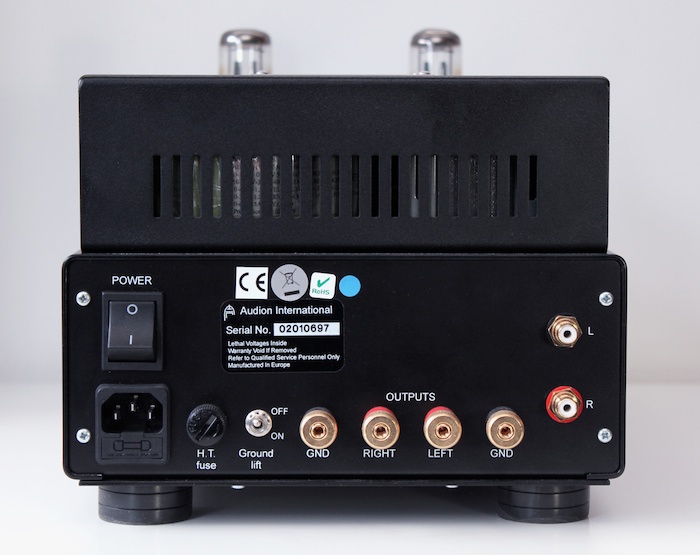 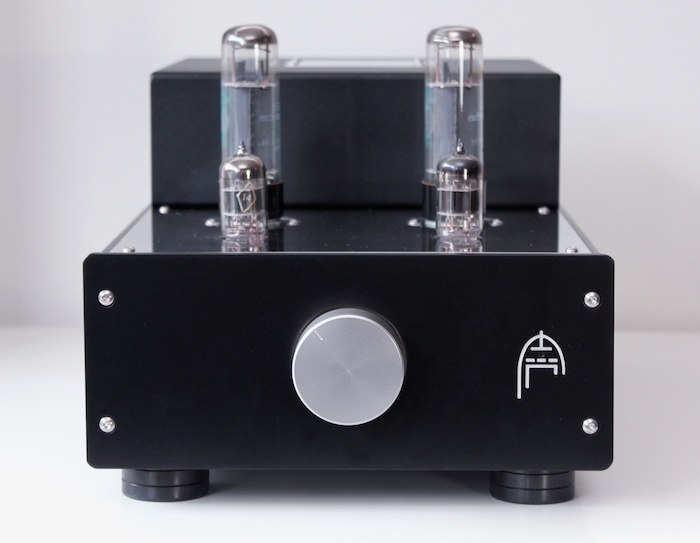 June 2012. A few mates dropped by for pizza and beer last night. They know that I write about hi-fi but – music fans too – they apparently care little for good sound; one listens to Spotify through laptop speakers (shock, shock, horror). We got to talking about how much LCD Soundsystem sound like Talking Heads. Such a notion causes an internal double-grin within the bones of this music fan. With Audion warmed, onto the Rega RP1 went a fresh copy of This Is Happening.  The RP1 might be the most basic of ‘tables but it still managed to recreate dutifully the in-the-gut kick of “Dance Yrself Clean”.  The very same kick that I’d felt in the Zu room at the Newport Beach show two weekends prior. The synth line squelches, James Murphy yells and visiting friends are silenced.  We sat dumbstruck/awestruck and two words fired: visceral, textural.  That’s Zu/Audion hypnosis for you: punchy impact and vodka-pour liquidity. A digital double-check took place the following morning via both PSAudio PWD DAC II and CEntrance DACMiniPX.  Yup, same dynamic drama – most impressive with the PSAudio – that don’t require waking up with the clockwise volume turn.

But wait.  USA Audion distributor Gary Alpern reckons the 300B is even better.  Said 300B model is the same that Sean Casey (of Zu Audio) frequently deploys at shows.  It’s the model that Mike Kirkham (Australian distributor) uses for Zu Omen Definition sales demos.  This review might be ending but I suspect my own journey with Audion is just beginning. As compelling an argument for ‘quality watts’ as you’ll likely find at any price point, the Audion EL34 Sterling Anniversary amplifier kicks goal after goal. Do not let the specifications sheet deceive you – this is one mighty and beautiful sounding unit. 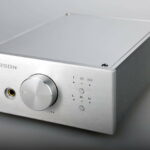 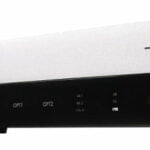