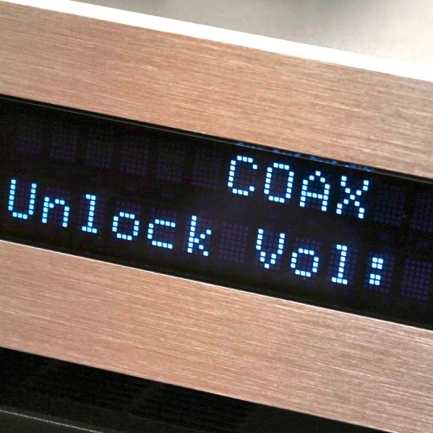 Having just moved house and the new apartment still in disarray, this blog post comes to you from Sydney’s North Shore where a tray of work-shy music lovers had earlier convened for lunch and an afternoon’s DAC auditioning. The key question on this fellow’s mind: is NAD’s M51 DAC as good as initial forum chatter might suggest?

Due to the informal nature of the gathering, that the testing wasn’t done blind (we’re all too lazy for such anal-retentiveness) and that the whole thing was a wrap after three hours, feel free to ignore everything that follows. Or don’t.

V.’s hi-fi emporium is full of exotica. And there’s plenty of it! His main loudspeakers are YG Carmels (US$18000) via which some oxymoronic casual scrutiny would be exacted upon the NAD M51 (AU$1499), TeddyPardo’s Wolfson-based DAC (1163 Euros) and Lenehan Audio’s Level 2 PDX (AU$2500 upwards) which runs the much-adored Burr-Brown PCM1704 silicon. The transport was a Cullen Circuits-modded Sonos ZP-90. Tube and solid state amplification were alternated as the afternoon grew dim. 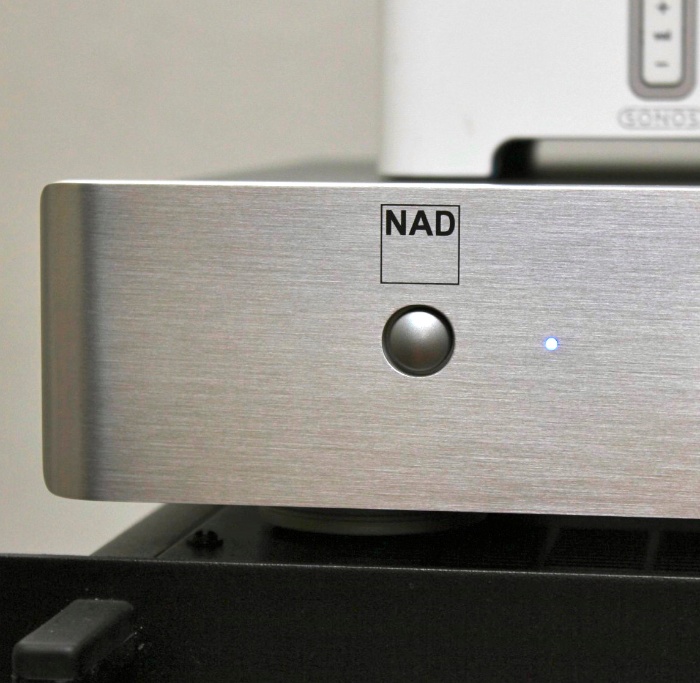 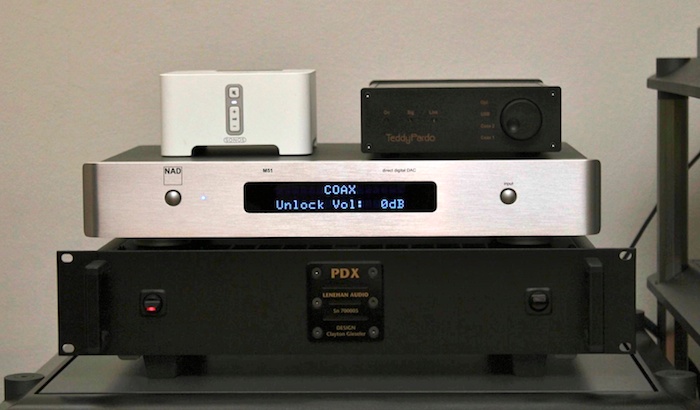 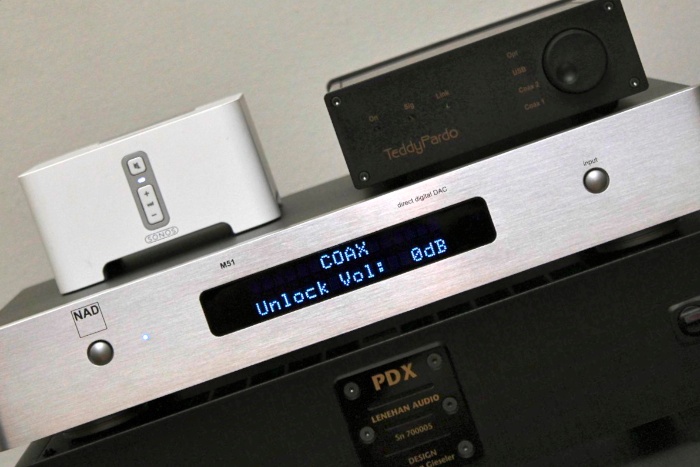 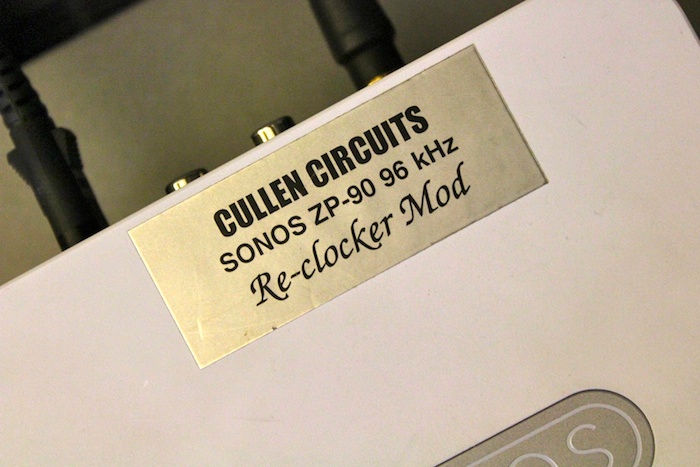 TeddyPardo DAC: warm, condensed, relaxed and extremely easy to listen to. Not the last word in detail/resolution but certainly no slouch in communicating the pace and rhythm of music. Similar in poise and earthiness to the Rega DAC.

NAD M51: Detailed and clean (with hints of wide-eyed optimism). Very similar to the Metrum Octave: music as flowing water. Effervescent and engaging. Better at reproducing the dry whack of stick-on-drum and thicker-stringed with acoustic guitar-pluck.
Lenehan Audio PDX: Stunning detail retrieval but everything presented as over-pronounced and over-acted. This was music carved deep into the air. Tough to listen to for prolonged periods.

All but one listener preferred the NAD as the pick of the bunch. The dissenting hand went to the TeddyPardo…and I can see why. The PDX was considered to be almost unlistenable. Strong words? Yes. System synergy fail? Yes. 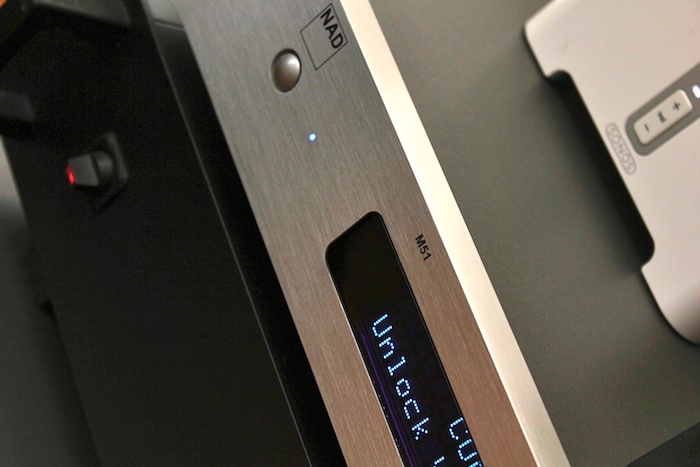 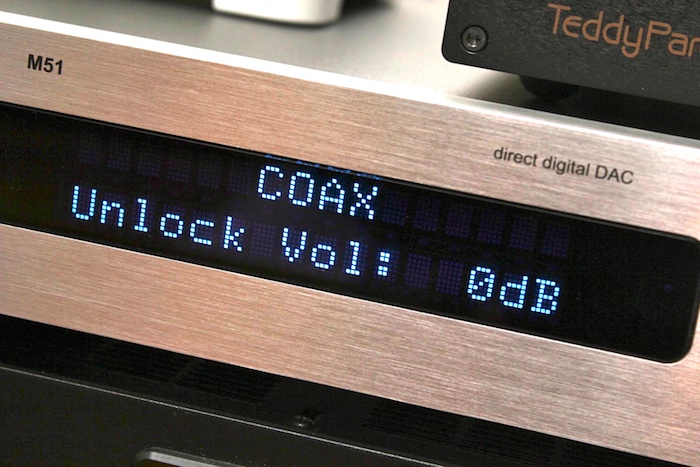 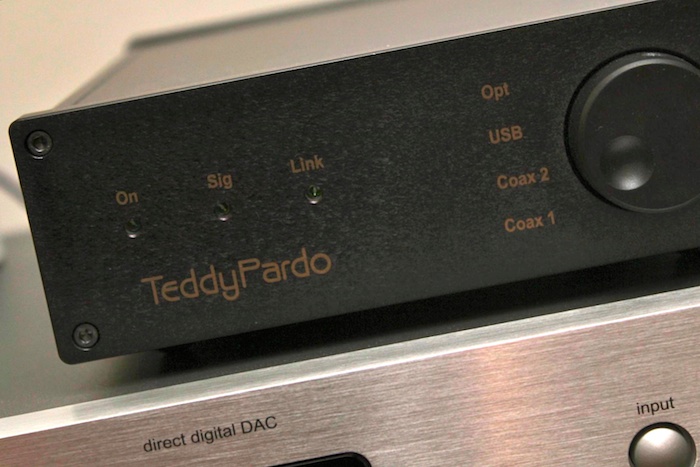 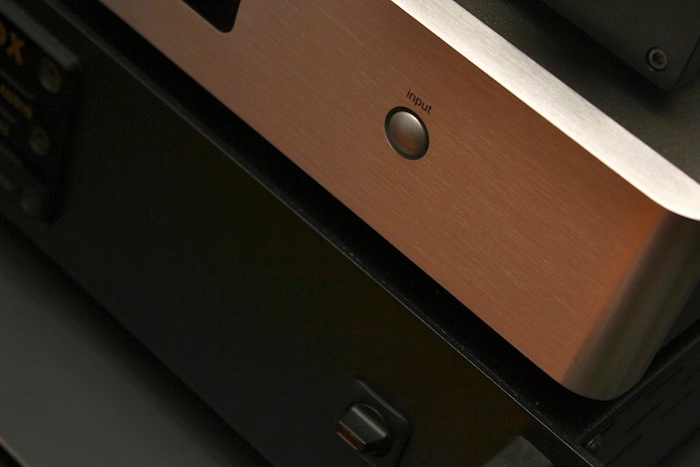 Things took a slightly different turn once the tubes were switched out for solid state amplification: the stunningly transparent (and pricey) Swiss-made, solid-state integrated from Dartzeel CTH-8550 (US$20000). Here, the TeddyPardo unit was stripped naked to reveal a shortcoming: a slight glare in the lower treble. It could not match the other two units for inner-detail-mining or soundstage width/depth.

The PDX showed far greater extension in both frequency directions. Some might call this ‘air’ and ‘bass depth’. Team Lenehan’s box continued to display an immediately thrilling/arresting listen, but this time without avidity heard earlier behind CJ tubes. The listening panel felt that the PDX didn’t play music that you can relax into – it’s edge-of-your-seat stuff…and that’s where you remain. I picture myself as Malcolm McDowell in A Clockwork Orange, my eyes pinned open and forced to endure everything in front of me. More dramatic than subtle, the PDX is pure ultraviolence. It’s a preacher, all up in your grill with musical evangelism.

The M51 and PDX ran pretty much neck and neck in most other areas. The Dartzeel amplifier ensured this crude A/B switcheroo was much a closer-run thing . The PDX had the edge on extracting every last nuance of detail – it knows how to suck the well dry. The NAD was more understated, working best with balanced outputs – no surprises – for a smoothness and transparency that’s tough to ignore and then – ultimately – also easy to ignore. The listener doesn’t have to grabbed by the scruff of the neck to notice timbre and tone. Subtlety is as important as drama. NAD get that.Due to the cleanliness and directness of the M51, I personally prefer it behind the vapour-trail of tubes. What can I say? I like a little honey-fied romance sometimes.

The NAD’s internal design is unusual. Their PR team would probably call it ground-breaking. It can accept digital input signals of up to 24/192 (yes, even USB) and then immediately up-samples it into the middle of next week. The USB is audio class 2 compliant, so no drivers required for Linux and OS X. 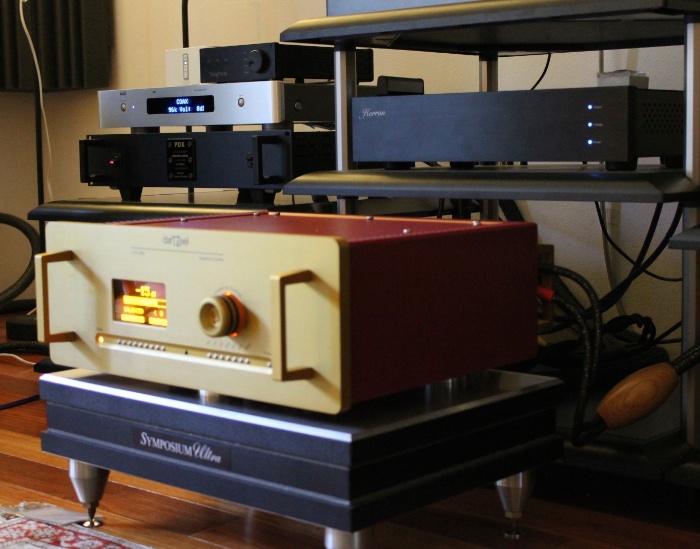 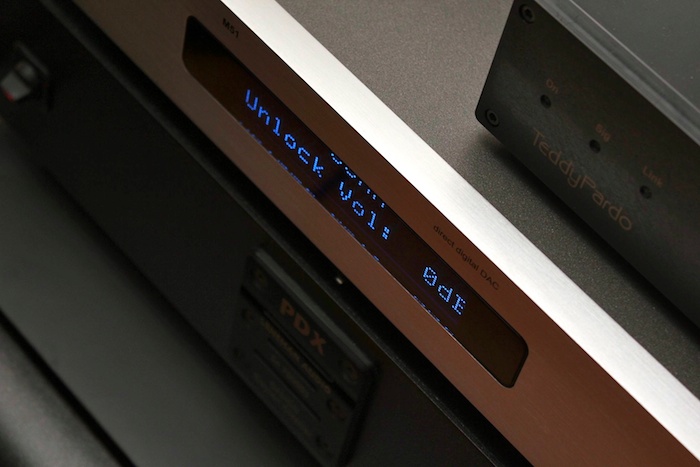 “NAD’s technology uses a very powerful processing engine that operates at much higher speed and with much greater accuracy than typical Digital-to-Analogue converters. Running at 108MHz, the M51 resamples the incoming pulse code modulated (PCM) signal and converts it to a pulse width modulation signal (PWM) with a sampling rate of 844kHz.”
“The extreme headroom afforded by the 35-bit architecture allows for a DSP-based volume control that does not reduce resolution. Even with 24-bit high definition signals, the output can be attenuated by 66dB (very, very quiet) before bit truncation begins.” 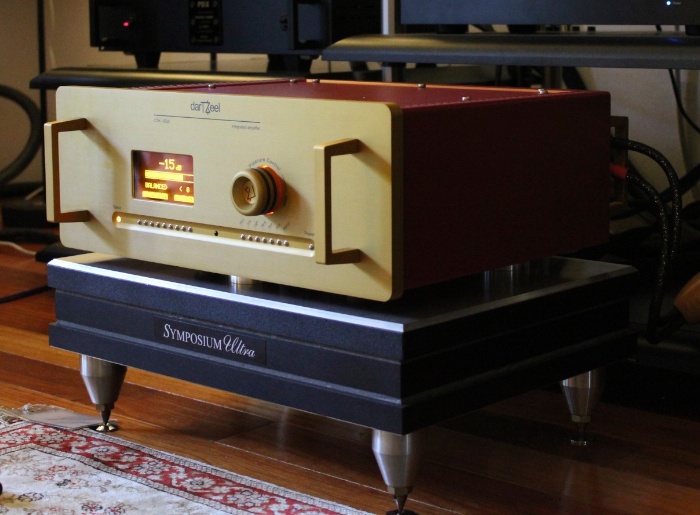 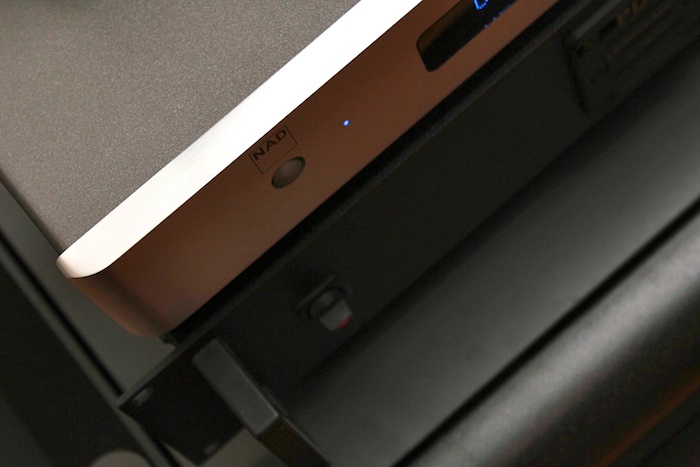 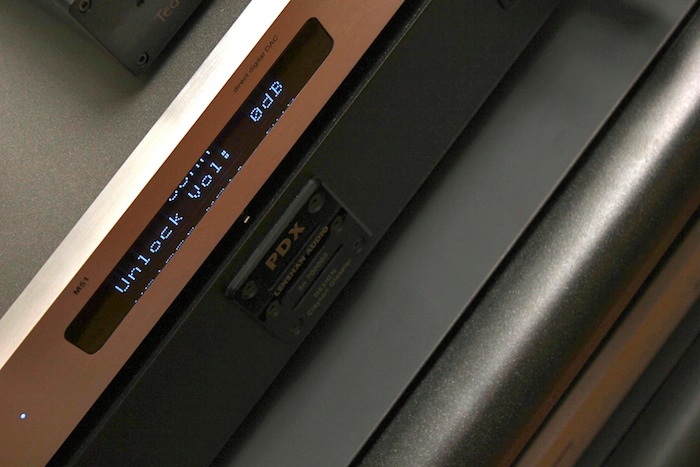 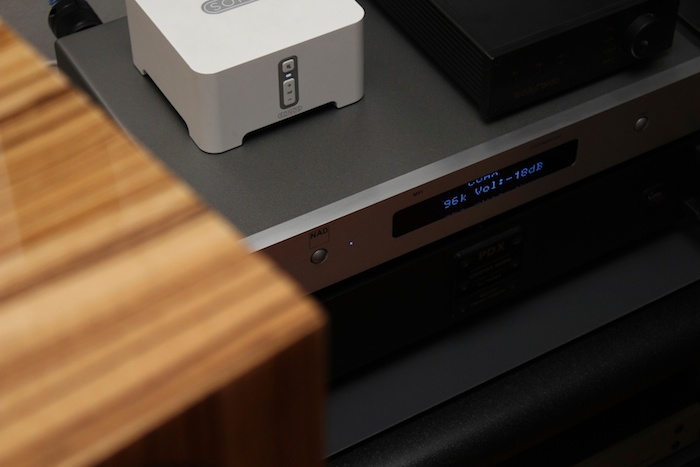 It isn’t all good news for the M51 though. Stock levels in Australia are pretty much (close to) zero at time of writing and this model is so new that Audio Products Group have yet to ready a local press release. (The M51 has yet to be listed on APG’s website).

Also revolutionary is Australian pricing. APG are to be LOUDLY applauded for nailing their RRP colours to the mast with a local price of AU$1499. In Europe, the M51 will run you 2000Euros. In the USA, US$2000.
The NAD MN51 is a rare beast: one of scant few products whose Australian RRP is the lowest in the world AND one that lives up to the initial hype. Probably. Remember: this afternoon’s listening only served as a taster and is far from the main meal of product ownership or a review loaner. 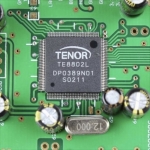 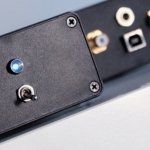