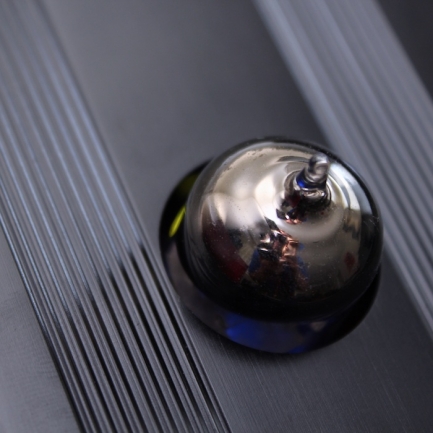 Inflating the tyres on the Trends T-amp coverage: add a PA-10 tubed pre-amplifier (and head-amp) to the previously reviewed TA-10.2 (in power amplifier mode) and have them both fed by a dedicated linear power supply box, the UD-10.1 – that’s the “Combo One” meal…

One hot August in the very early nineties (and a few weeks before heading off to university for the very first time), I began recording all my vinyl onto to cassette: The Style Council, Pet Shop Boys, The Waterboys, ABC, Talking Heads, David Bowie, The The, World Party.  These little slabs of plastic would see me through several years living in tight quarters.  The room in the halls of residence were extremely modest (i.e. small).  A cat would not swing.  My system at the outset was an all-in-one 80s number with its own display rack and – oh yes – glass door.  Loudspeakers were of the chipboard variety.  Twenty years later, it’s unbelievable that this kind of thing – now smaller, but just as poor sounding – is still pedalled in mainstream electrical stores.   Someone, somewhere is rubbing their hands together and cackling like a demon. 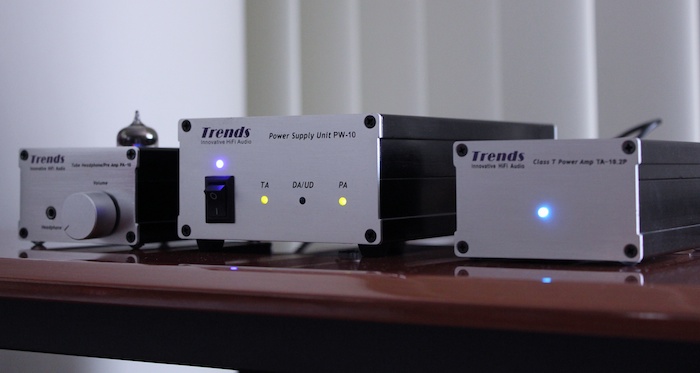 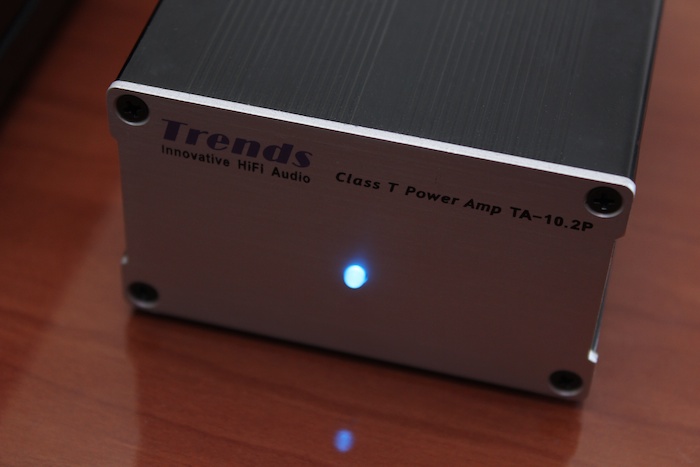 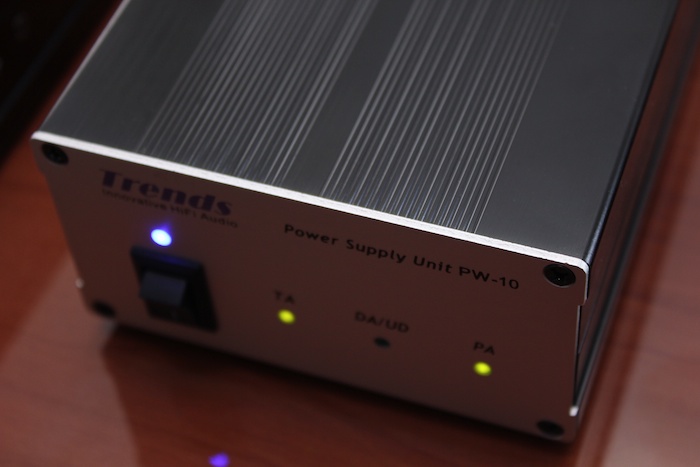 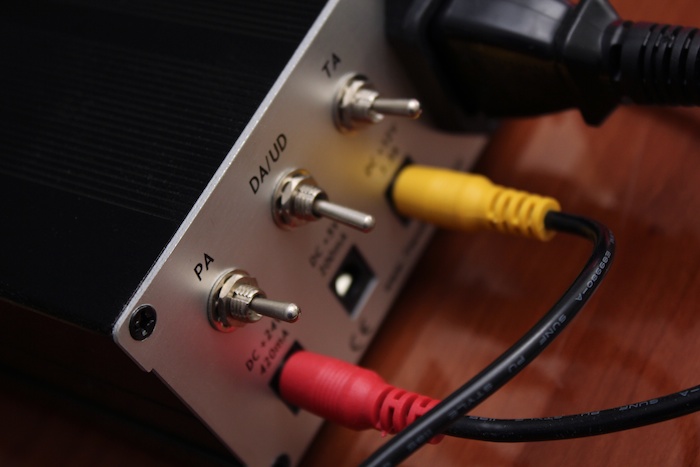 Back at university:  within six months, I’d migrated to a humble – but considerably better (and infinitely more portable!) – separates rig:  Rotel integrated and Mordaunt-Short stand mounts.  This was back when everyone referred to them as bookshelf speakers.  It made sense to these ears at the time – they sat on each corner of my study desk.  I don’t think I even knew about speaker stands back then.

I’d also moved to a Sony CD player and Aiwa cassette deck. The latter soon began to languish back at my parents’ house, whilst my thirst for CDs bombed my student overdraft deep into the red.  These were the days when if you wanted to hear the new Dylan release, you had no choice but to buy it.  Let’s face it:  cassette copies sounded dire (and probably why home taping DIDN’T kill music).

How would I do it now?  Stuck on the tidiness of integrateds, I’d likely opt for a Trends TA-10.2.  It ticks all the boxes:  portable, cheap and without a huge compromise in sound.  Single box solutions are often the most appealing due to their inherent simplicity and elegance.  The Trends matchbox sounds great and it’s utterly tiny (even when compared to micro system offerings from the likes of Denon).  Speakers?  I’d probably have it powering a pair of John Blue JB3s, fronted by MacBook and (maybe) a USB DAC.  Job done:  a great sound from a desktop system that would fit comfortably in a suitcase.  And yet many, many students still buy the chipboard-speakered, midi-systems pushed by Harvey Norman and Bing Lee.  Worse still, some settle for the MacBook McAudio sound of their laptop’s inbuilt speakers – shudder. 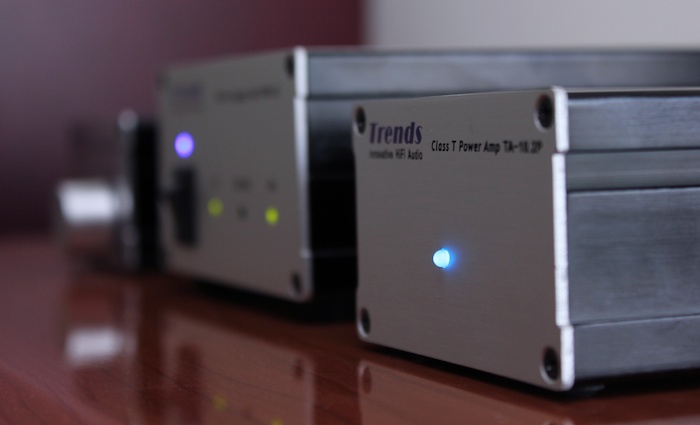 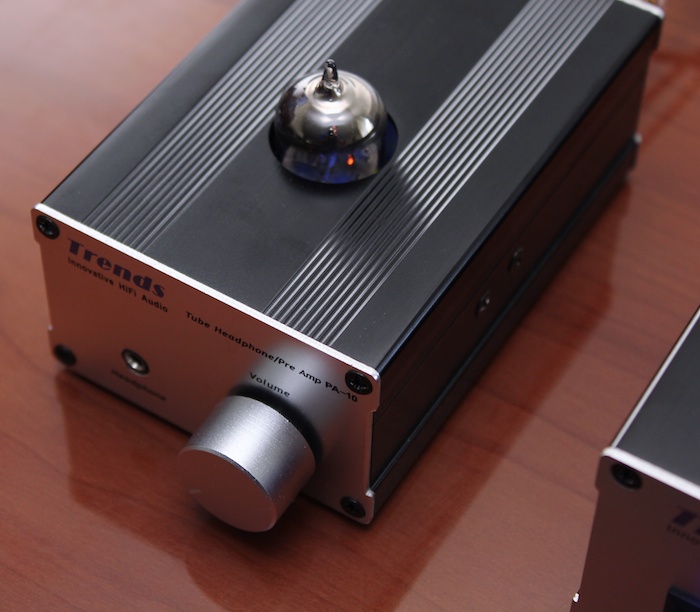 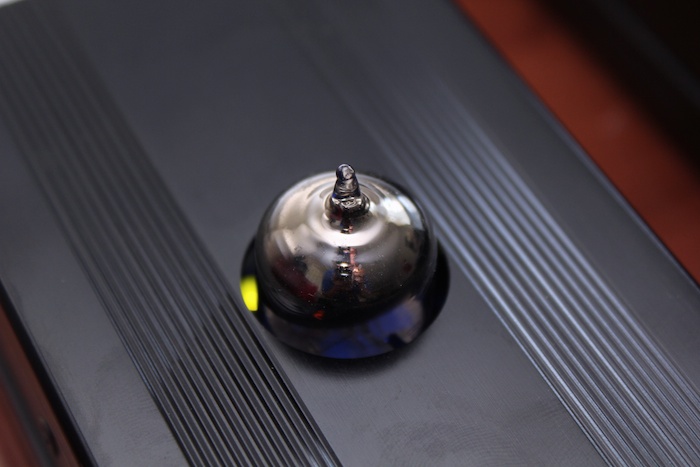 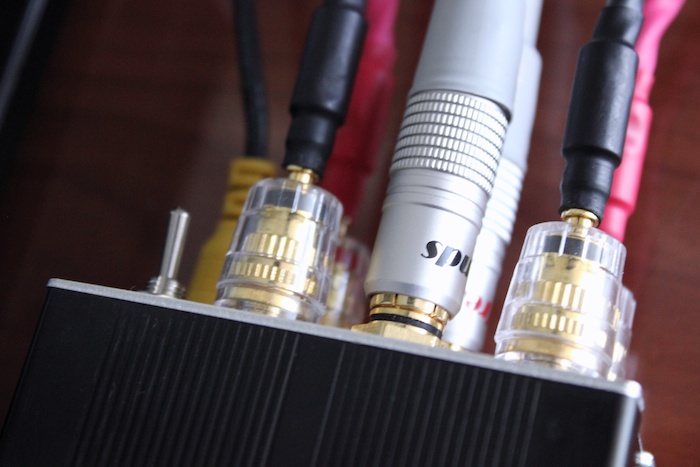 My point here is not that (student) consumers are dumb, it’s just that they’re mis/under-informed.  If only they knew about how delicious a budget audio meal from Messrs Trends and Blue could taste; how much it could enrich their life.  Does that sound patronising?  Quite possibly.  Oh well.

When the upgrade itch strikes, how to scratch it?  Not even the savvy young guns are immune to that.  David Ho (of Trends) hopes he has you covered.  Trebling the box count to three we have the TA-10.2 power amplifier (“Class-T”, Tripath) and the PA-10 tubed pre-amplifier (Class A) with headphone output, both of which are leashed to the UD-10.1 linear power supply box.  Goodbye switch mode power supply and hello Russian 6H23n-tubed pre-amp.  Be warned and warmed: true to its class, the latter runs HOT.  Heat from a desktop amplifier that sits within arms reach might not be for everyone. Tasmanian folk might find this more enticing than those in Darwin.

Three boxes in this Trends Combo One (US$630) means considerably more cable visibility and tangle. Eroded is the simplicity of the solo-ing (DAR-KO awarded) TA-10.2 SE integrated amplifier (US$225).  Aesthetically, the three amigos don’t pack quite the same jaw-drop as the preceding integrated.  From three times the price, one rightfully expects more.  If the integrated was a fresh slice of lime dropped into a vodka tonic, this Combo One SE is a whole orange – bigger, bolder, sweeter but unable to cut through the palette as effectively.  Listeners that found the lime-d integrated too sharp to taste might indeed the Combo’s bolder-but-softer manner. 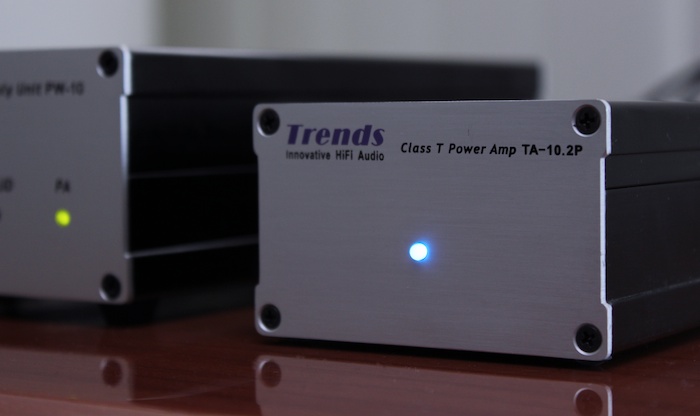 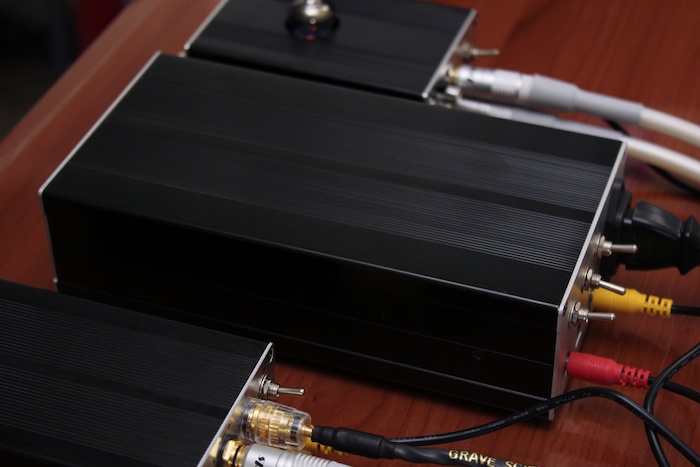 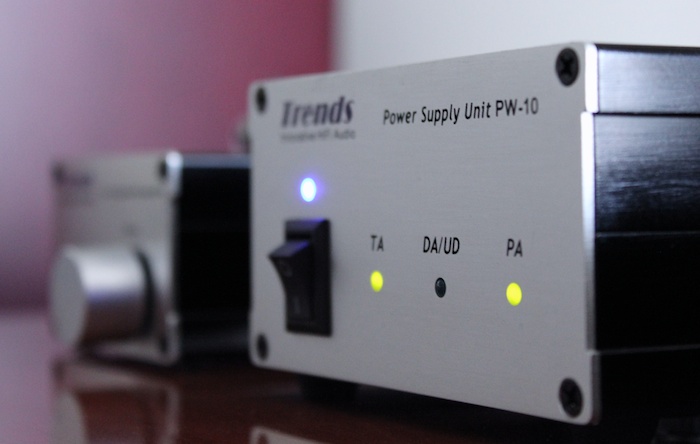 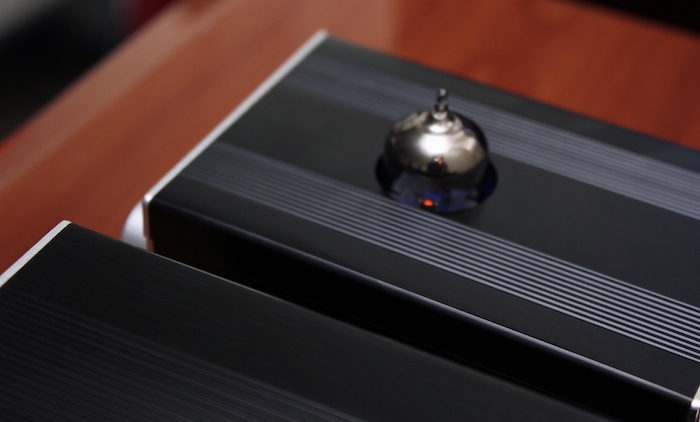 And yet, cutting from solo integrated scene to the three box solution wasn’t the revelatory, must-have upgrade that I’d anticipated.  Music is broader and taller and connotes greater body mass…but it’s also cloudier, fogg-ier and a tad condensed.  It lacks the separation and incision of the single box solution.  Those that find the 10.2 integrated too sharp on the tongue might enjoy the tubular intervention, but it comes at a price:  resolution.  Of course, one could tube roll to something more exotic, but this again takes the user still further from the simplicity of where we came in:  an integrated.

Suede’s remastered “She”, still has plenty of swagger and snarl but is the soundstage expansion worth the additional expense when inner detail retrieval is the pay-off?  That’s one for YOU to decide.  In trying to declag the sound, I ditched the Trends supplied interconnect (between pre and power) in favour of WLM’s Lyros.  This removed a thin film of obfuscation but few in their right mind would spend as much on cabling as they would on this Trends combo. 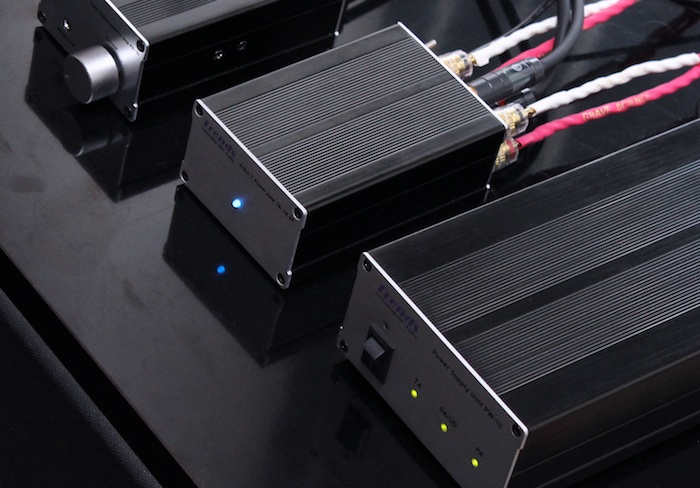 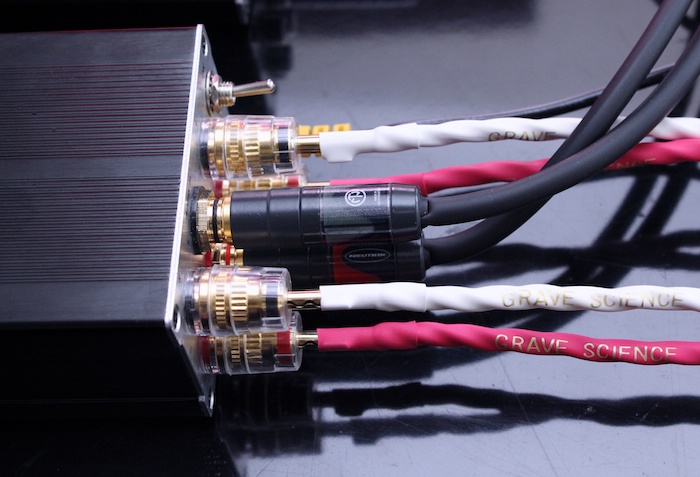 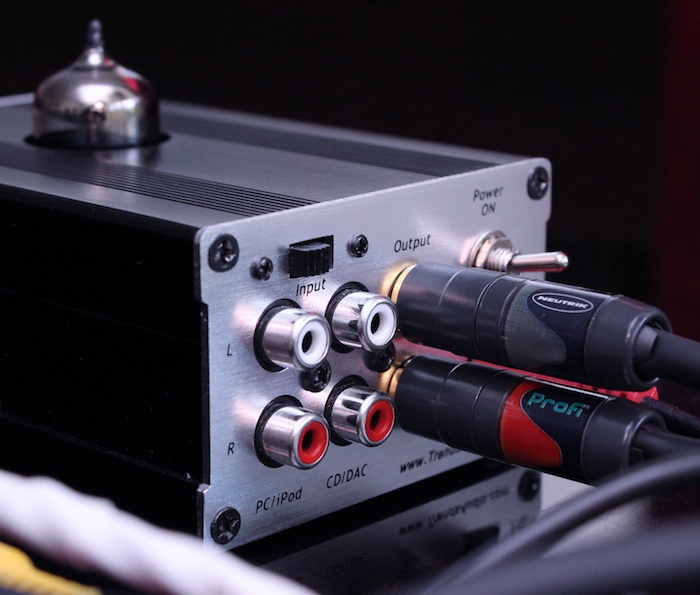 Let us not forget:  Trends Tri-path solutions have balls. With PA-10 in the mix, even more gain is dialled in.  Too much gain perhaps? Numbers: x3 on the CD/DAC input and a (whopping) x6 on the iPod/PC input.  When the pack of three are hooked up to Zu Omen, the volume pot proved to be too lively for 98db sensitivity.  Anything beyond 8pm was FAR too loud.  I parked the PA-10 and took the musical flow direct from an Audio-gd NFB-12 DAC.  Using the Sabre-chipped DAC’s volume pot for attenuation proved to be both more revealing and less in your face.  Comfortable listening levels usually sat between 10 and 11pm. This budget DAC also fits a student’s strictness with dollars.  It too doubles as headphone amplifier ensuring the only thing we surrender is the tubular natured-pre.  Both the Audio-gd NFB-12 and Trends 10.2 show signs of strain with AKG-702.  As head-amp, the PA-10 again showed evidence of its abundant signal gain; anything beyond 9pm became uncomfortably loud.  The easier load of Ultrasone DJ cans proved far easier on the ear: less stressed and not as brittle with transients.  The Audio-gd has low- and high-gain switchability.  The Trends PA-10 would benefit from something similar. 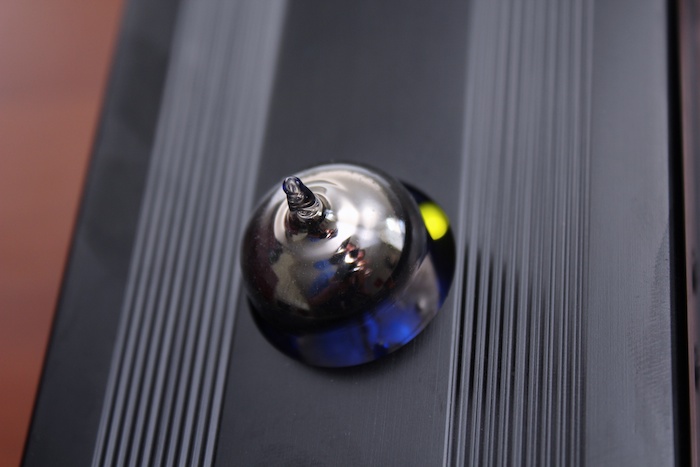 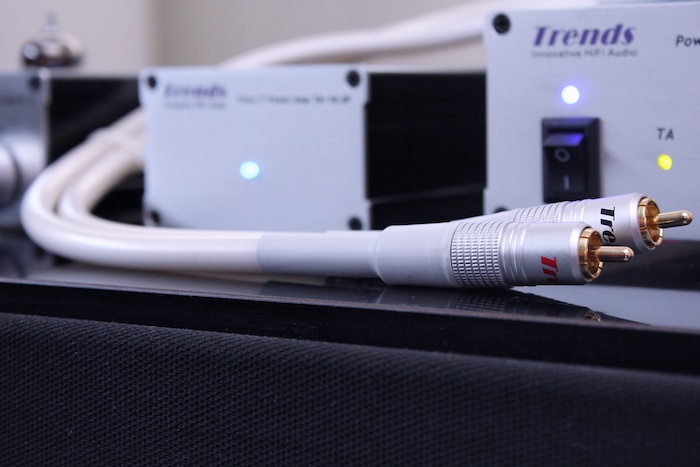 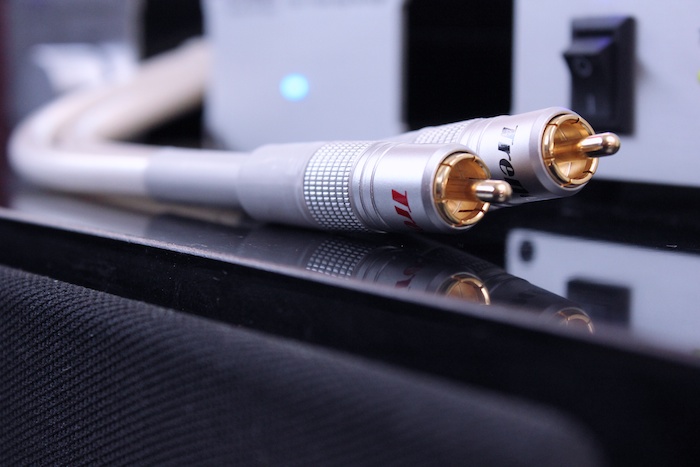 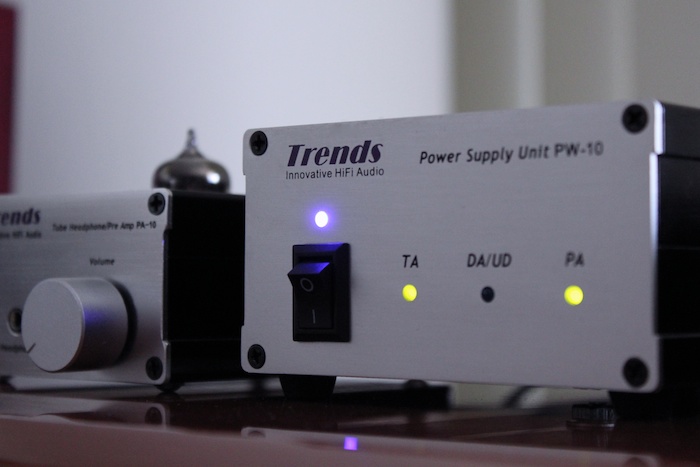 With this discovery, the question bellows:  why not simply configure the original TA-10.2 as a power amplifier and put the upgrade dollars into a volume attenuating DAC (such as the Audio-gd)?  One would still sit with switch-mode power supply, yes, but at this end of the market this is a compromise many will be happy to live with.

Considered in isolation, this Trends triumvirate of tubed-pre, Tripath power amplifier and linear power supply STILL keeps Trends at the sharper edge of the budget system sword.  There is much to like and admire here and it stands as a neat alternative to Rotel/NAD/Cambridge etc.  However, the *in-house* competition of the TA-10.2 integrated means that the more convoluted combo is neither as incisive with detail exposure nor value for money.  The TA-10.2 integrated has the simplicity and elegance that only a one-box solution can provide – it has spoilt this listener.  In that context and for this one guy, David Ho’s TA-10.2/PA-10/UD-10.1 triplets fail to convince me of the necessity to upgrade.  However, for those yet to spend any time in Trends territory, this package system will still sound seriously forthright and engaging in the context of its cable-money price point. 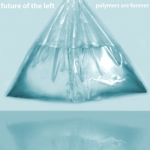 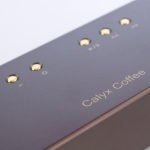