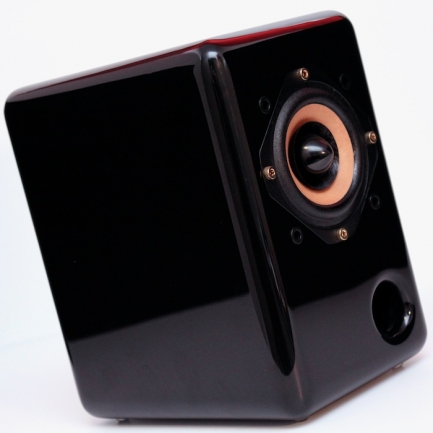 Desktop audio.  It’s fun now and again but a guy can’t live at his workstation 24 x 7.  Desktop hifi products are fun because of their form factor’s inherent flexibility:  office, study, TV station etc.  Many manufacturers prioritise the small box over the resulting sound quality.  Fair enough – but as soon as we traverse the twin peaks of ain’t-it-tiny and ain’t-it-cute, we’re left with the quality of musical reproduction — or lack thereof.  Peachtree Audio and Virtue are cognisant of such dietary concerns.The Peachtree iDecco all-in-one and the Virtue ONE.2/TWO.2 integrateds are stand-up examples of desktop audio products that make the jump to lightspeed — into serious (furrowed-brow) audiophile territory.  Such products look good, can reside on the desktop as well as stand-up to main rig scrutiny – to whit, there are no long-term health issues. 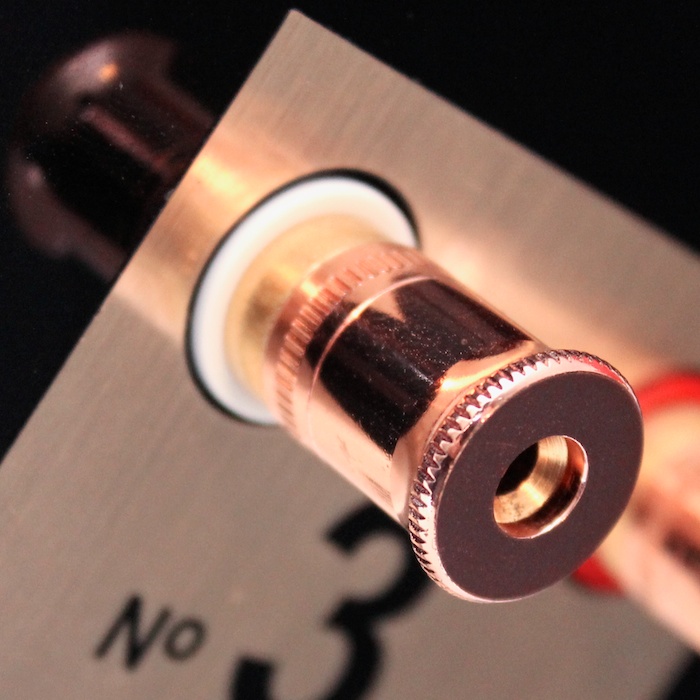 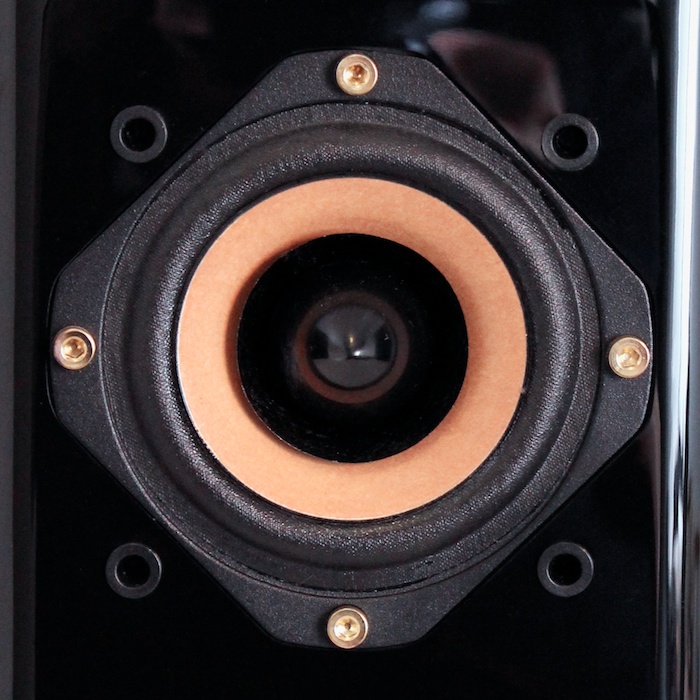 One look at the JohnBlue JB3 (AU$515) and my mind darts to the visual synergy with the similarly high-gloss-black iDecco.  I know what my wife would say if presented with such a partnership: “That’s cute.  Why can’t we just have that?”.  Part of me laughs a ‘yeah-right‘ dismissal and part of me cringes, knowing she might be right.

Those not familiar with single-driver loudspeakers of this flavour will immediately note a hint of dryness and a lack of polished sheen when compared to two-way competitors.  Deeper crayoned tonal colours, top-end ‘zing’ and midrange-trumps-bass – you either dig it or you don’t.  Is this why the single-driver aficionado is seen as some jazz-lovin’, tree-huggin’ environmentalist?  Perhaps.  Taiwanese Tommy Wu’s biggest achievement with his JohnBlue Audio Art brand is his slow erosion of that cliche. 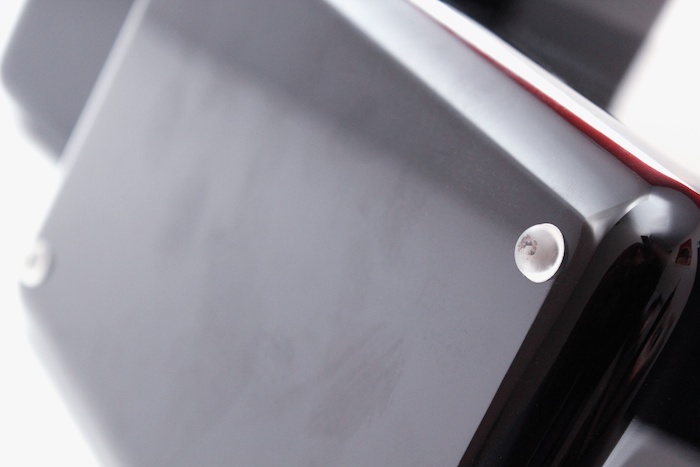 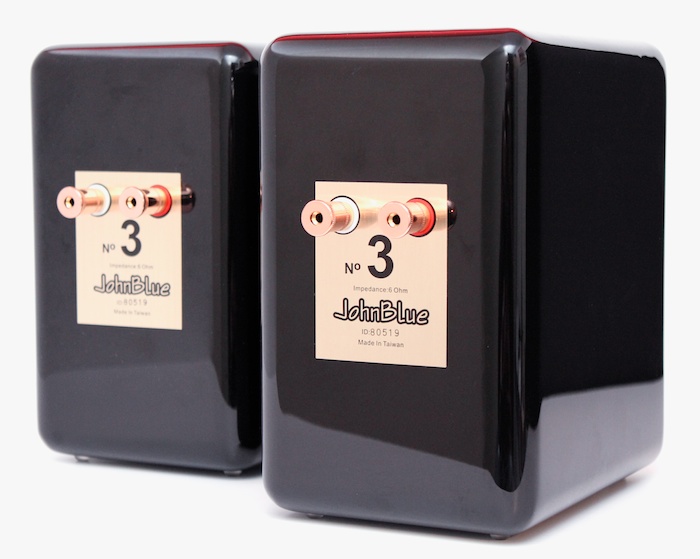 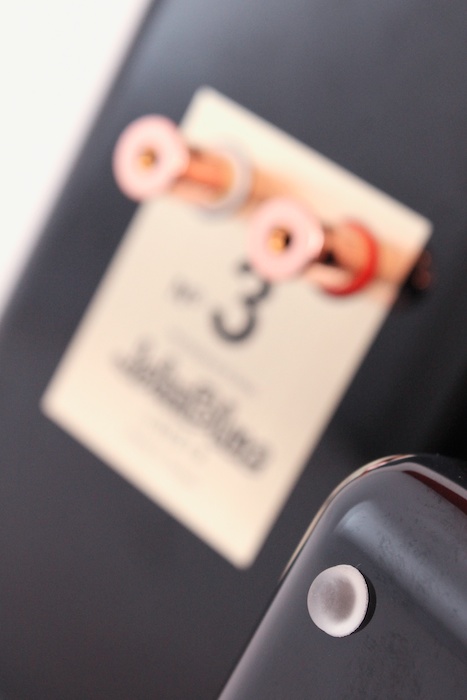 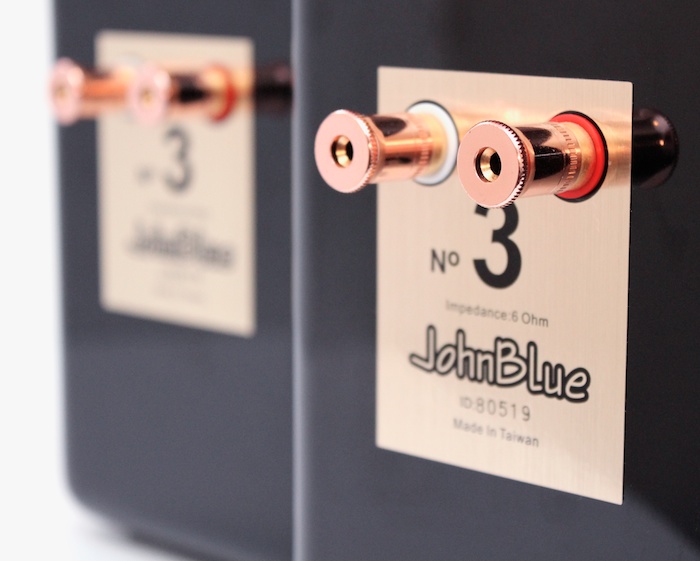 Right out of the box, the JB3 looks stunning.  It encroaches on Fostex/Lowther-type territory from a different direction.  The all-gloss mini is cut for those who want a finished product and don’t care for DIY and its associated vernacular (‘back-loaded horn’ anyone?).  Like Louis Chochos of Omega, Wu makes single driver loudspeakers for modern consumers.  Bringing people into the single-driver fold – without the bullshit indoctrination ceremony and snobbery – is what JohnBlue Audio Art do.  You plonk ’em down and you plug ’em in.  Too easy.

The rubber feet on the JohnBlue JB3 say everything:  desktop placement.  Whatever you have, you’re gonna need a bigger, heavier desk.  The bass output on a desktop presents some vibrational challenges, especially for IKEA fans.  I tried some rubber-footed cubic besser blocks – it helped, but not to a point that I could live – and work – with.  Only the most anal-retentive of readers will be asking themselves “Why didn’t Darko try another desk?”.  REALLY?

This desktop disappointment was two-fold.  The partnering (100%-desktop) Kingrex T20U DAC/amplifier pointed towards a very special synergy; a first indicator that the JB3 was no fast food junk.  Maybe not a bona fide desktop loudspeaker then?  Let’s move ’em to the lounge.

A nominal 6-ohm impedance and 87db (in)efficiency means low-powered tube amplifiers aren’t really on the menu.  I start solid state and find the shiny black boxes to be a little bit picky about what feeds them.

Playing Depeche Mode Remixes 81-04, the upper-mid range energy of complexity-gone-loud from an Exposure 2010s2 might frazzle some ears; one man’s “frazzle” is another’s “excitement”.  The Tripath Trends TA-10.2 re-connects me with the aforementioned Kingrex synergistic flavours.  With an up-ending in favour of higher frequencies, the Weston Acoustics push-pull Troubadour rounds some of the sharper transients.  The tubed-up Australian integrated tempers the JB3 transient dryness with a light spray-mist moisture.  This was the most amenable — musical! — of pairings.  The JB3 responds better to the lick of tubes than the bite of solid state.

There ain’t no slam and bass output rolls off early.  However, substantial inner detail and refinement from the waist upwards is face-palm obvious.  Acoustic guitars and string quartets are reproduced with speedy realism.  The ability of the JB3 to portray a string’s shape and its (associated) pluck are strong suits.  Two cases in point for the evidentiary committee: the solo voices and simple acoustic strum of Neil Young’s Harvest Moon or Joanna Newsom’s harp-driven Ys.  This makes perfect sense:  less is demanded of the single driver.  I was thus reminded of one blogger’s complaint at hearing Diana Krall in 90% of rooms at a US hifi convention – “…that shit sounds good on anything“.  He has a point.

Large orchestral?  Mass strings?  I don’t think so, no.

Going north with SPLs on bass weighty electronica — Moderat’s “A New Error” – sees the cone distort as its excursion increases.  JB3s are not for big rooms or for those that would expect desktop proximity to approximate the headphone experience.  If you’re in search of the latter, why approximate? Get cans.  Moreover, much of the doped-cone’s deftness with tonal richness is found with simple music.  The JB3s struggle with maxtreme complexity – they freeze in fear (causing rigidity to creep into the mix).

It isn’t the implementation that brings such limitations.  It’s the concept.  The three inch mid/bass driver of the Dayens Tizo also brings speed, SPL limitations and awkward inefficiency (and even narrower amplifier options).  The Tizo trades the midrange transparency of the JB3 for more bass punch.  Both are small room loudspeakers where music reproduction is required on a smaller scale, but where proportions remain un-compromised.

(Predictable) limitations exposed early on, interested parties should note that the aforementioned firm criticism will be of peripheral concern for the majority of listeners.  Two areas in which the JB3 truly excel:

IMAGING: the musical performance takes place between the speakers and not because of them.  $500 on boxes that don’t sound ‘boxy’ is trickier than you might think.  Single-driver models have an innate advantage.

SPEED:  a 3″, crossover-less design means PRaT is finger-snap fast.  The JB3’s efficacy with speed is why electronic music fans at the back of the class should sit up and pay attention.  Some folk — myself included — value speed of delivery over bass extension.  The latter can always be appended by way of a subwoofer but you can’t easily make a speaker sound faster.  Bedroom heads won’t need it – my second listening room (3m x 5m ish) proved to be the most appropriate space.

In terms of weight and scale, these are quality starting-point speakers that fall between two stools:  too big for the desktop, too small for a medium/large lounge room.  A non-audiophile friend in Melbourne has his computer desktop in his lounge room.  For him, the John Blue-s would be a neat (lifestyle) fit – they would suit his pro-photographer eye for smart aesthetics to a tee.  A desktop DAC and amplifier from the likes of Brik, Firestone, Pro-ject, Trends, Kingrex would complete the composition.  I can think of at least three other friends for whom I would buy a Kingrex/Trends + JB3 combo to help them escape their horrific 90s midi-systems. 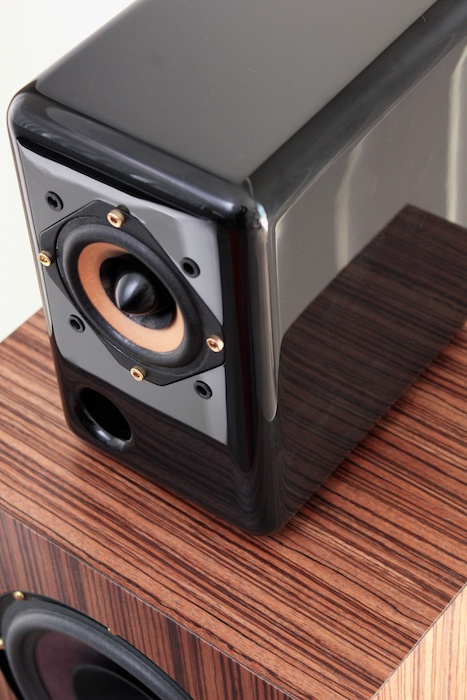 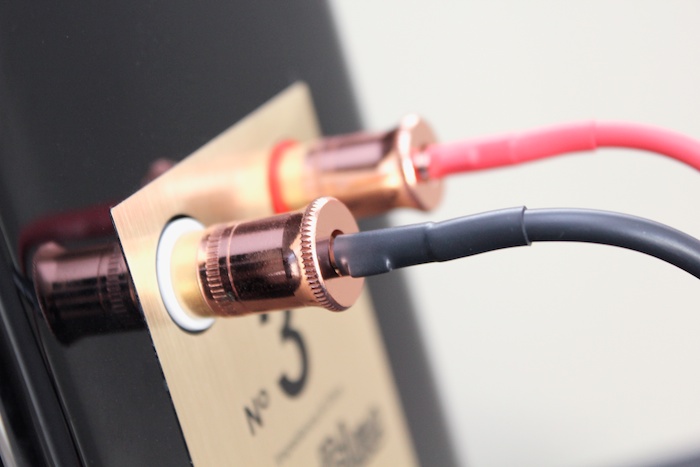 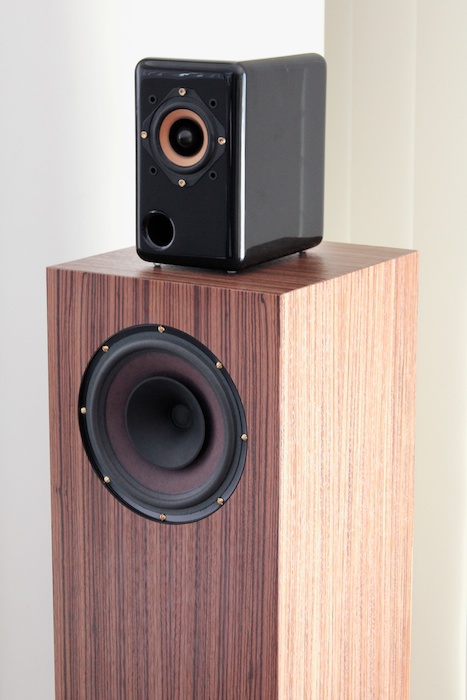 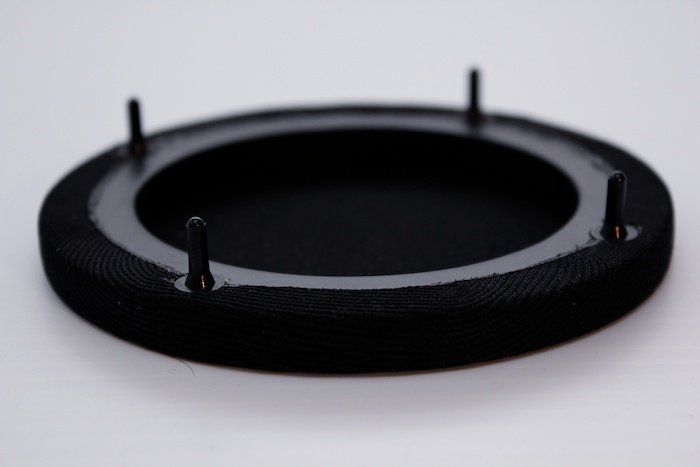 With one foot on the desktop and one foot in the lounge room, Tommy Wu is sounding the quality-over-quantity bell.  He’s up in the belfry, ringing it LOUD so that the man in the street might hear.  This loudspeaker is the logical first step beyond the beige of mid-fi mini systems. It will return musical nourishment to (non-)audiophile ears.  With the JB3, spending less doesn’t translate to a junk food diet.  It just means a smaller portion.

[JohnBlue Audio Art is distributed in Australia by Music Gateway] 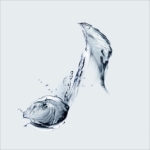 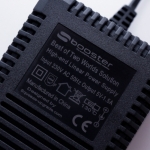