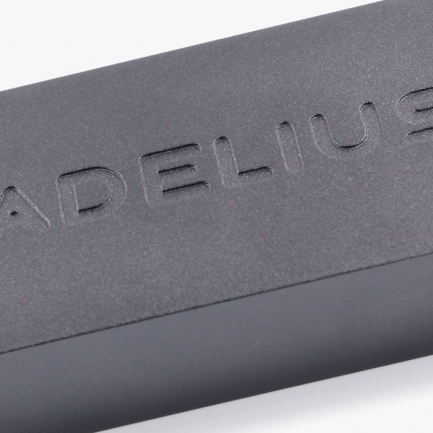 On the one hand, USB DACs annoy the bejesus out of me.  There’s only one connectivity option (USB – duh).  Without S/PDIF, there’s no adding your own upstream transport/re-clocker to marshall the USB-emanting jitter.  Both models of Audiophilleo and the John Kenny-modded Hiface MK2 can make appreciable improvements to even the most frugal of DAC purchases.  Not so with USB-restricted DACs: the consumer/listener is shoe-horned in to the singularity of the manufacturer’s USB implementation. 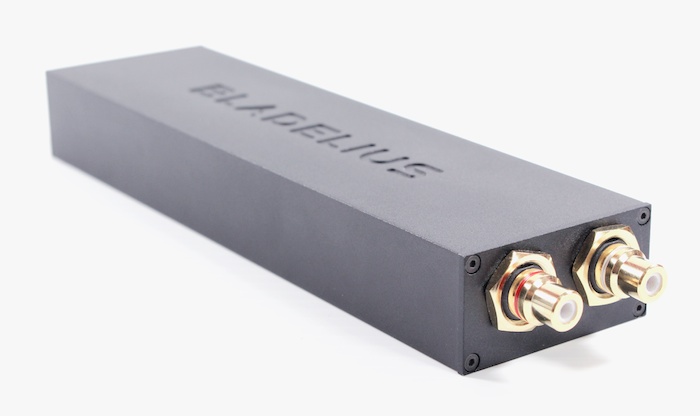 db Audio Labs’ Eric Hider is resolute in this belief that adding S/PDIF innards to a USB DAC degrades sound quality.  Fair enough – his Tranquility SE is a USB DAC of rarified quality.  At twenty three hundred bucks, it should be – but his work on audible quality more than compensates for its connectivity limitation and Redbook feed restriction.  At the more affordable end of the market, much of the competition plays a cunning trick:  a desktop form factor softens the landing of long-term expectation shortfall.  It’s been documented elsewhere, but bears repeating here:  I recommend you buy a (USB) DAC because it offers a sound you find pleasing and not because of its cutesy box dimensions.  If office listening is your thing, get a bigger desk.  Or tidy it.  Make room.

On the other hand, the sheer simplicity of USB DACs is beguiling.  One input, one pair of outputs – job’s a good’un.  Such minimalism reduces mental clutter but ‘ere be monsters.  Many consumers like the ideaof USB DACs, plonk their money down and then later suffer a sharp attack of buyer’s remorse when the sonic nourishment doesn’t cut the mustard. 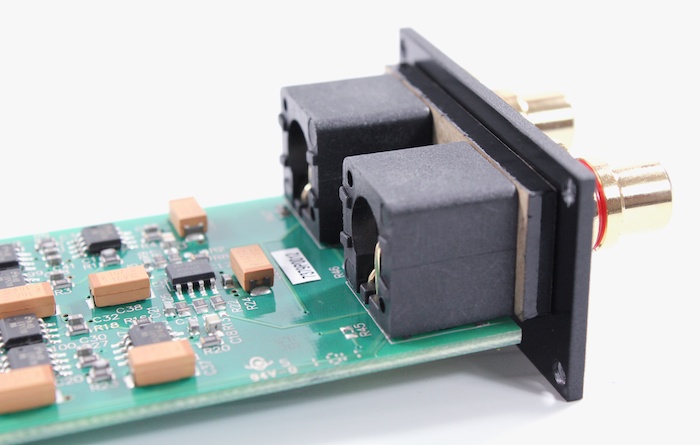 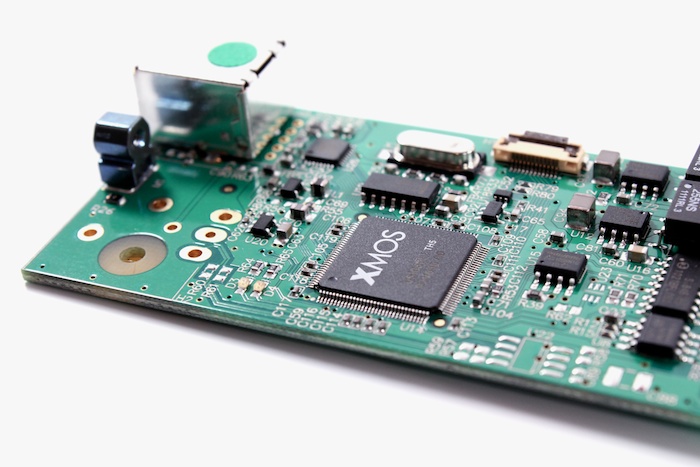 USB DACs have to work harder for one’s dollar.  When a manufacturer subtracts flexibility, they must append listenability.  If they rob Peter, Paul must get paid.

Sweden’s Bladelius USB DAC is stickered down under with an RRP of AU$699 – right in the heart of budget DAC land.  Its candy bar form factor is desktop do-able:  18.5cm x 5cm x 2.5cm.  Asynchronous USB transfer?  Yes.  24/192 capable?  Yes.  Galvanically isolated bus power?  Yes.  We’re off to a solid start.  There are no LEDs present anywhere.  The clean lines and brand etching speak clearly of its Scandinavian roots.  The box has a solid feel in-hand with a sobre minimalism that’s more Phillipe Starck than IKEA.  Bladelius earn their Design Group nomenclature.

With an XMOS chip handling bits, this is a USB Audio Class 2 DAC:  OS X and Linux will handle driver loading natively and invisibly.  Windows users will need something third party for anything above 24/96. 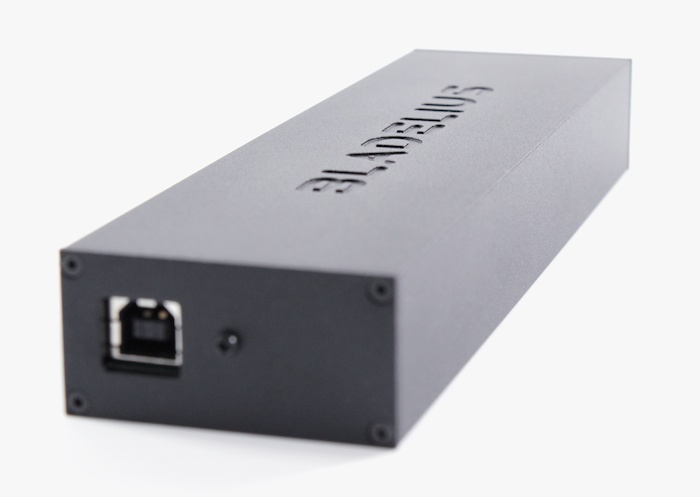 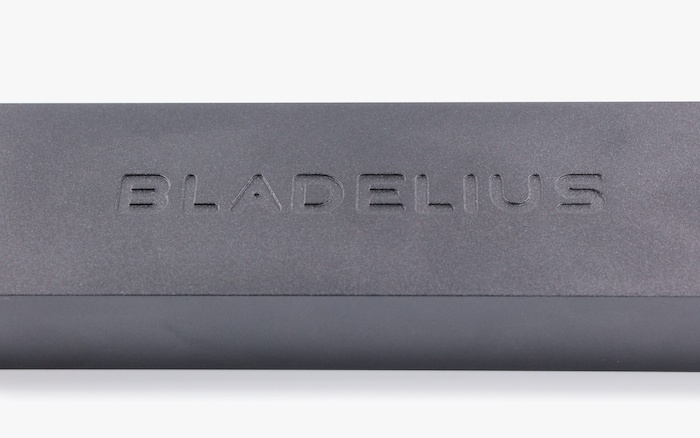 The Bladelius ain’t no NOS, so the oversampling nature of the (unspecified) DAC chip requires filtering.  Visit the Bladelius website and you’ll see their concise explanation (with layman-friendly diagrams) as to why they’ve opted for a minimum phase filter over a the more common linear phase filter.  To save you the click, their reasoning centres around linear phase filters being more susceptible to pre-ringing:  a pre-emptive sonic artefact that can be a contributor to that unpleasant coin-in-the-mouth taste.  The post-ringing of minimum phase filters is more conducive to Bladelius’ aim for a more “analog”-sounding box.  How many times have we heard that before?  Analogue – it’s the buzzword of 2011 DAC marketing.  Cynicism aside – theirs is an in-house designed filter.

Neil Young’s “Rockin’ in The Free World” presents as smooth and easy going without losing sight of the song’s urgency.  The candy bar DAC ain’t quite as smooth as the Anedio D1 with the aggressive transients of Suede’s “Trash”, but it isn’t far off.  The Anedio nudges ahead with more insightful detail retrieval drawing a slightly deeper soundstage.  All of this with Trafomatic Aries and 47Labs Lens.  Transport is a 2010 Mac Mini. 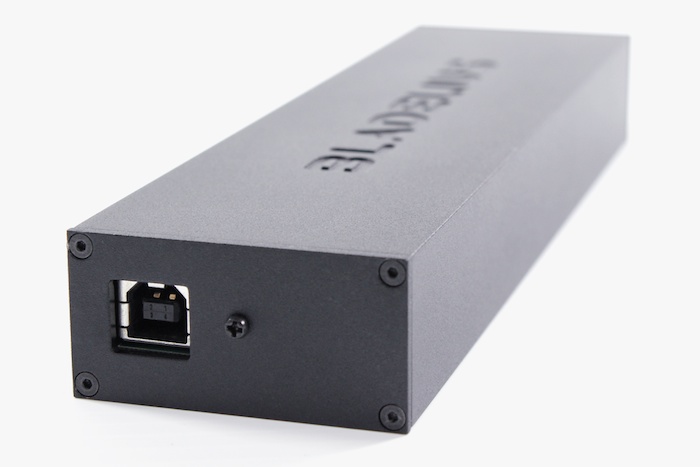 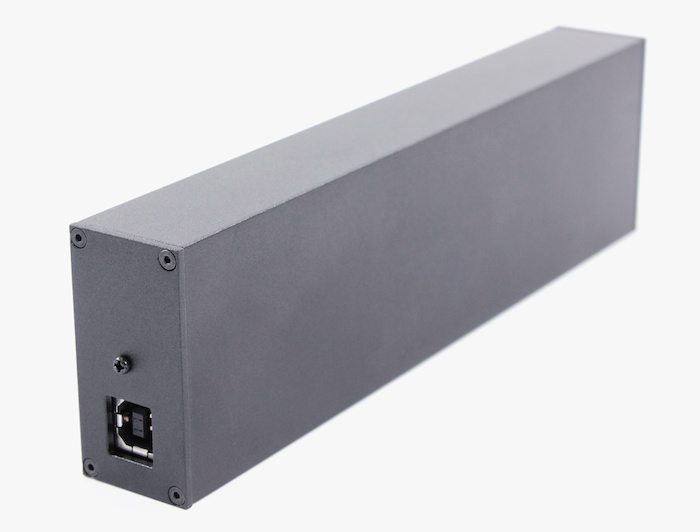 Switching over to the Exposure 2010s2 driving Rogers LS4a…the lower midrange of the Bladelius wins out in the prominence stakes.  Mat Osman’s bass guitar lines are more pronounced.  The Swede makes for a fuller-sounding Suede.  An unexpected and pleasing discovery.

If the waiter were to serve a cut of Bladelius (when I’d ordered prime rib Anedio), I’d notice differences but find little to complain about.  Beef tastes different to lamb…but I enjoy each with equal measure and prefer neither.  The Anedio is cow-derived meat – its appeal more middle of the digital road – and its ability to turn heads with detail retrieval is irreproachable (at US$1270).  Fewer diners would prefer the cheaper cut of Bladelius lamb, right?  The answer isn’t quite so black and white.  “Preferred” doesn’t always equate to “best”. 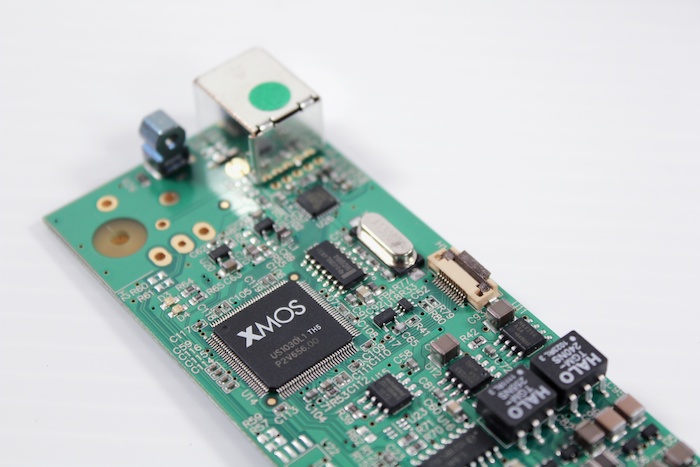 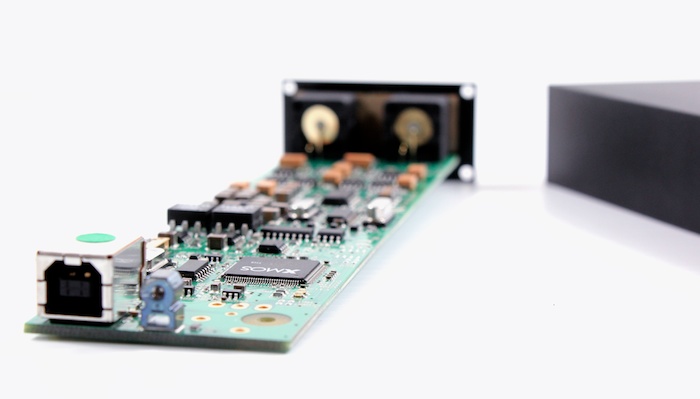 Would Sir prefer the beef or the lamb?  Behind headphone lines (Schiit Lyr and AKG K-702), Giant Sand’s angst-y Americana “Yr Ropes” is given A/B consideration.  Pedal steel, acoustic strum and hammond organ all vie for pole position before the electric guitar stomps them all underfoot during third chorus climax.  Both DACs handle such complexity with aplomb.  There’s little to complain about at Camp Bladelius – its more savoury flavour confirmed.  The Anedio’s sugar-to-brain rush handles subtleties with greater affection.  This is a comparo that’s reminiscent of the recent Anedio vs. Audio-gd – that Sabre personality is becoming easier to pick. Bladelius traits share more common ground with King Wa’s sonic vision. 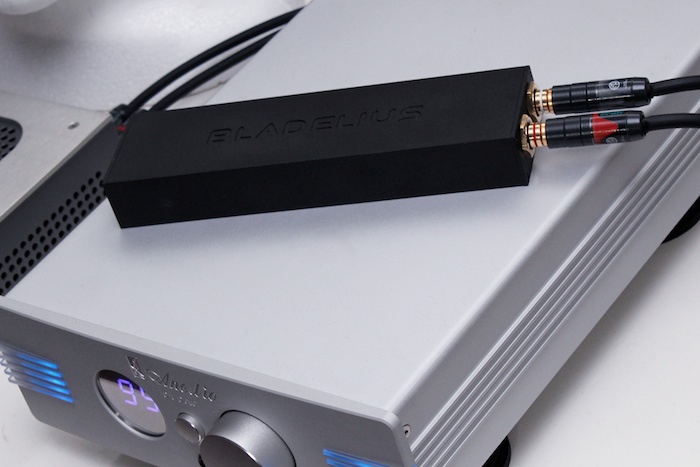 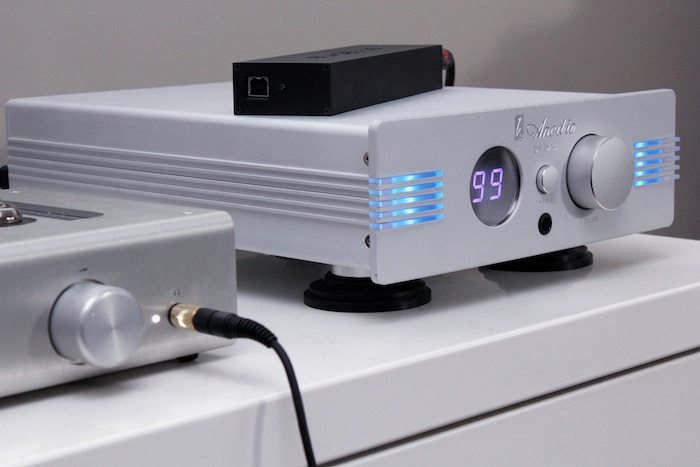 On system matching:  from a personal POV, I could live with either DAC.  The metal dome tweeter of the Rogers LS4a prefer the less showy Swede.  The Hoyt Bedford Type 1s relish the extra zing of the American when tubes act as intermediaries (Weston Acoustics Troubadour, Trafomatic Aries).  The Bladelius will slot right in to brighter, sunnier systems that might otherwise end up overcooked in the lower-treble by the Sabre-d Anedio.  My inner zen aesthete wants to love the Bladelius more than its one-trick connectivity will allow.  The double-money Anedio brings pre-amp, remote control, S/PDIF x 3, head-amp.  If you don’t need such flexibility and your system is sensitive to additional ‘daylight’, the Bladelius could be a go-er.  If your current DAC lacks lower-mid/upper-bass fullness, again consider some Scandinavian candy bar minimalism. 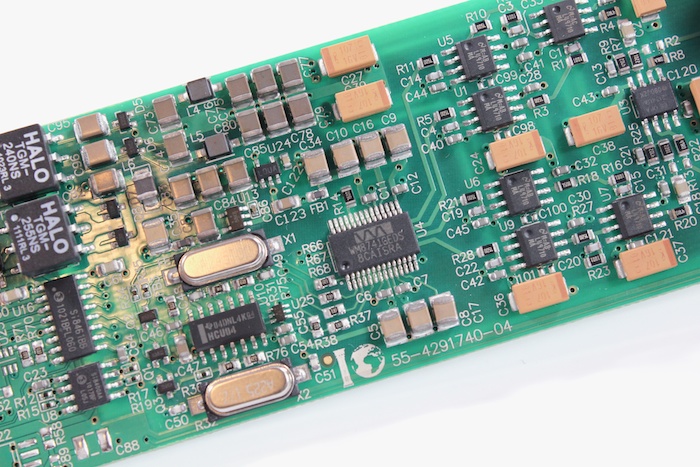 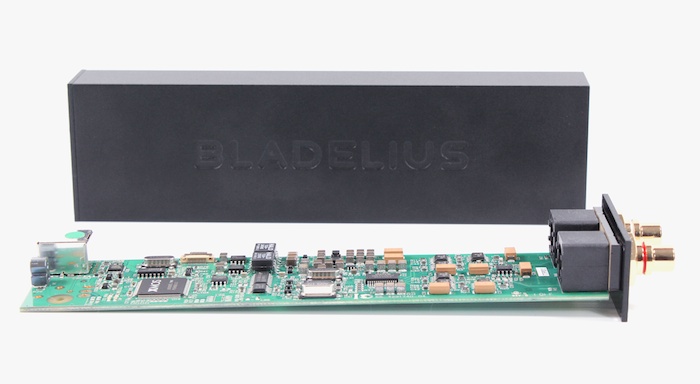 Much like the Audio-gd NFB-2, Bladelius’ midrange satiation sees it more closely aligned with the NOS faction (than I would’ve previously thought possible from single-bit chip genealogy).  Think TeraDak Chameleon (AU$500) without the frequency extreme roll off:  bass is full, treble extended.  The TeraDak is full fat vocal cream, the Swede pours lite – milky way.  Time for a peek inside, I slide out the innards with care. Two letters and four numbers catch me eye:  WM8741.  Wolfson are the chip-monks putting ‘meat on bones’ in the Bladelius.  The very same chip deployed by King Wa in the aforementioned budget benchmark.  Little wonder they offer similar density. 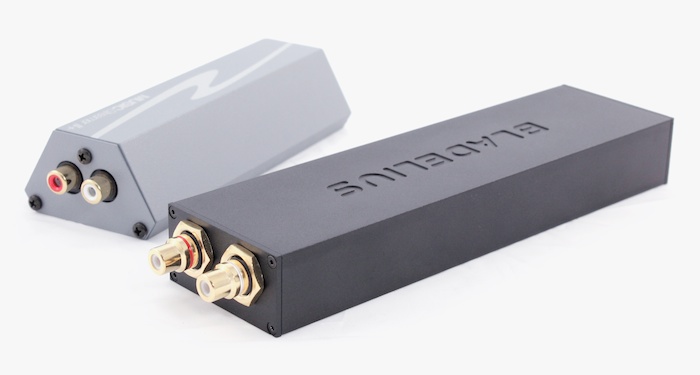 The Bladelius USB DAC was then compared to an HRT Music Streamer II+ (RRP$399).  The HRT displayed better instrumental ‘float’ but was  slightly more edgy-aggressive with transients. The Bladelius provided superior musical foundation and body.

Easy to listen to, the Bladelius USB DAC is a delta-sigma implementation that doesn’t endure an al-foil sheen.  A metallic silver paint job remains all too common at this end of the market, a big name offender being the Arcam rDac.  ThatBrit screams for an upstream USB-S/PDIF transport.  The Bladelius doesn’t (so much).  And there’s the rub – we will never know what improvements a superior transport could bring. 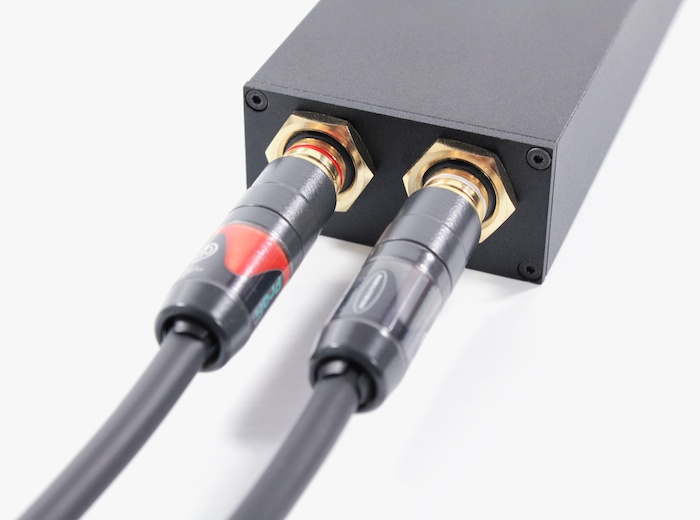 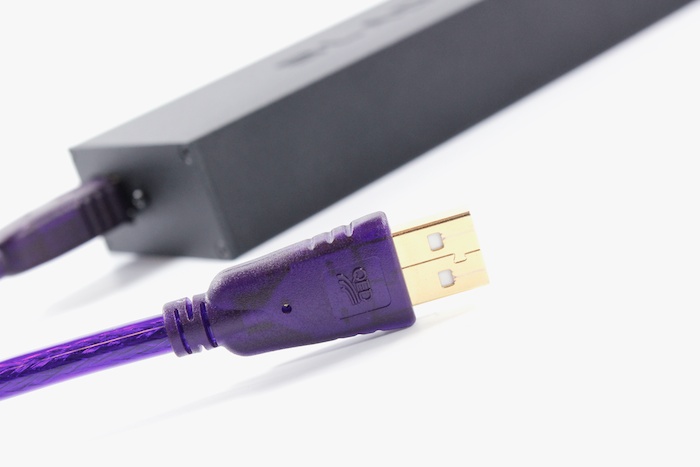 In the sub-$1000 field the DAC hunter should spear the compromise that’s least aggravating. The Bladelius partly dodges pronounced compromise with its plain vanilla flavourings. It shows no attention-grabbing behaviour and there’s little to annoy or unsettle during prolonged listening sessions.  With no Audiophilleo or M2Tech device to lend an analogue hand and smooth transients, the Bladelius still passes the prima-facie acid test of budget DACs:  little-to-no evidence of ‘digititus’.  It isn’t edgy or bright.  The Bladelius plies its trade by way of understatement.  Is this what some audiophiles call ‘analogue’?  If so, Bladelius have hit the bullseye of both their product development target and its associated marketing verbiage.  A USB DAC that more than justifies its connectivity limitation and is far better than its desktop audio form factor adduces. A Scandinavian USB DAC that’s better defined by what it’s not than what it is…and it still wins. Well done those Swedes. 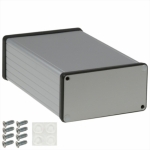 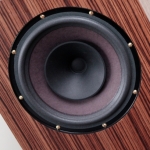