During them crazy-ass 1960s, DC-coupling in amplifiers was seen as a sub-standard topology (by some designers) but a cost effectivetopology (by some mass-producers); semi-conductors and capacitors were relatively expensive back then – less than ideal for a manufacturer’s bottom line.Furthermore, some companies took the DC-coupling idea and ran with it, believing DC-coupling to be a satisfactory way of increasing amplifier output.  With so many DC-coupled amplifiers dominating the market for so long, the audiophile ultimately became acclimatised to the sound and – eventually – sought it out.

This is how Richard Hay explains how DC-coupled amplifiers came to prevail. 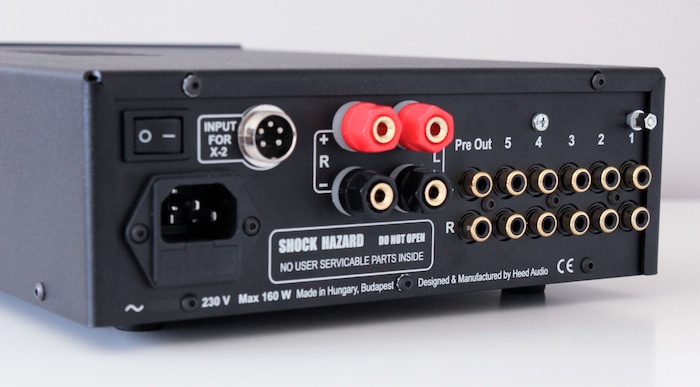 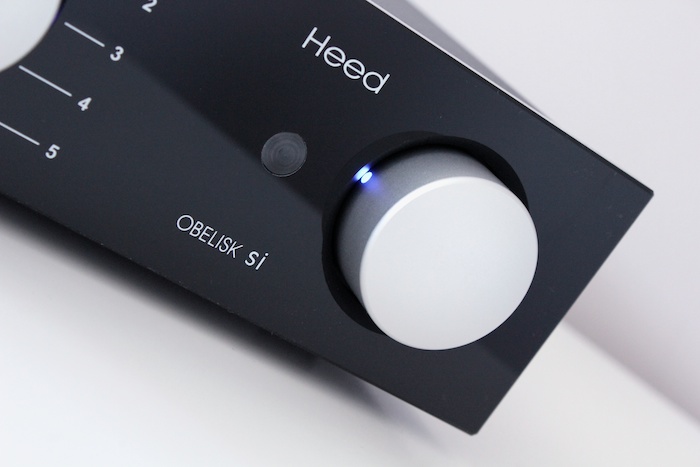 “Zsolt is strongly convinced that DC-coupling is the main culprit of the processed, often artificial sound – that is, chopped-off, square-cut notes, instead of naturally decaying notes – of most solid-state amps. He says, the superiority of valve amps over transistor-based should be attributed more to the way these are coupled to the speakers (not only, but to a large extent), rather than to the vacuum tube itself. The reason behind it is simple: tones demand natural decay; DC-coupling, however, tends to short-circuit the speaker, thus cutting off the notes earlier than they are naturally resolved in performance.”

“DC-coupling can be circumvented by 1) using output transformers (all valve amps, plus a famous exception from the transistor-camp, the McIntosh), 2) using output capacitors (Ion, Heed), or 3) using a fully balanced, truly +/- bridge-mode topology with two mirror-like amp stages.”

That’s how Alpar Huszti of Hungary’s Heed Audio tells it. 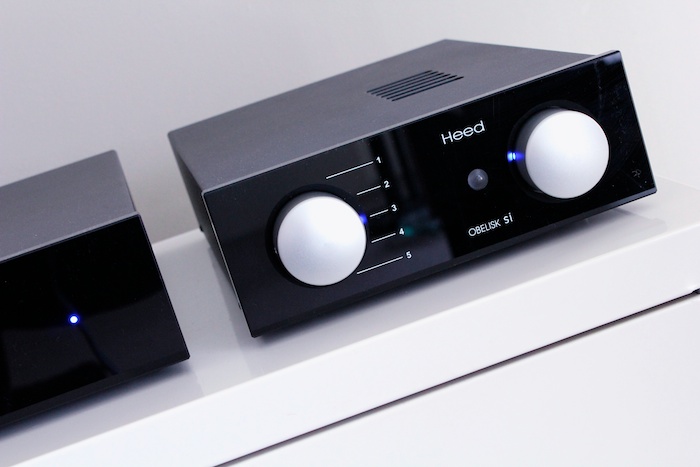 Alpar explains:  “We decided to carry on the spirit of Ion, and formed Heed Audio. Whilst the Obelisk, found a second life in our Heed Obelisk Pro, a new amplifier concept was realised alongside it. Based upon another Richard Hay brainstorm, the Heed Nexus power amplifiers were born ― featuring a second-to-none circuit topology in which a highly unusual bridge-mode approach was employed to avoid DC coupling and to realise a fully balanced ‘floating’ system.”

“We continue to maintain many of the unique ideas and technical principles we learned from these early studies to the present day: use of balanced circuits, external power supplies with integrated amplifiers, avoidance of DC coupling, actively driving speakers, and so on.” 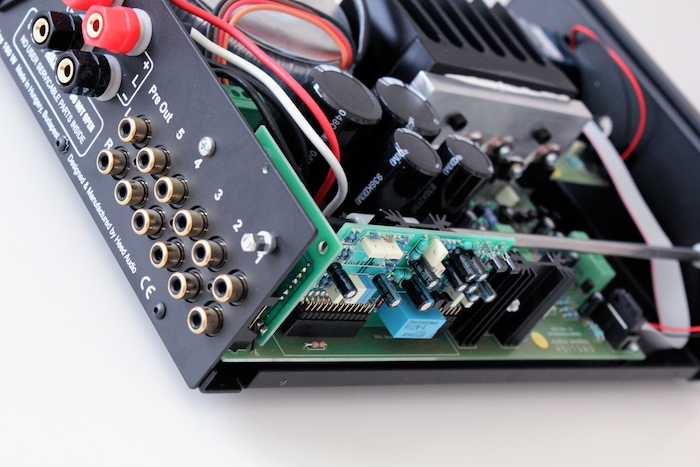 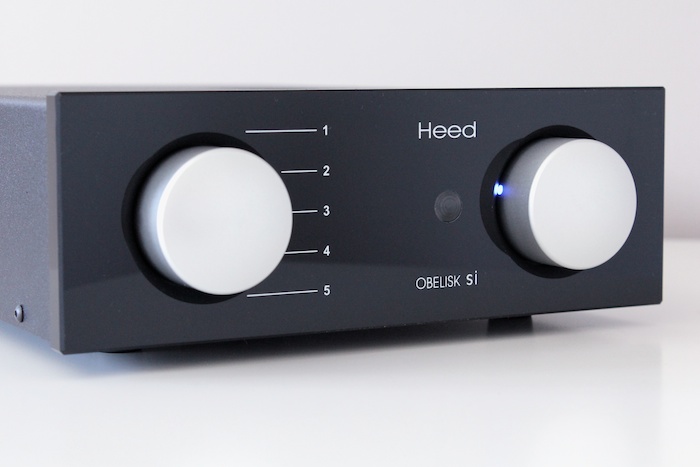 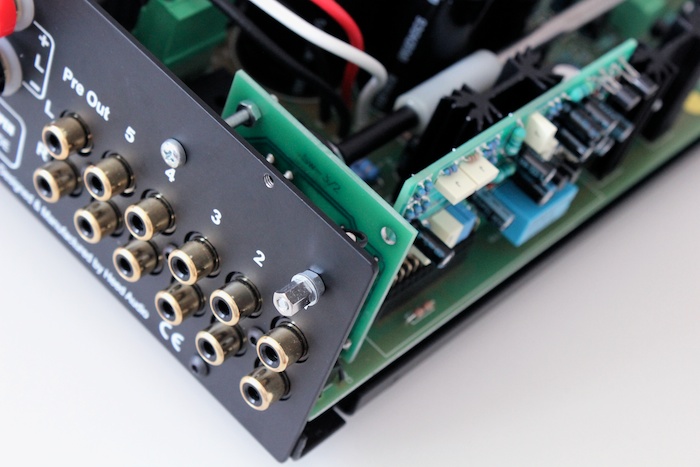 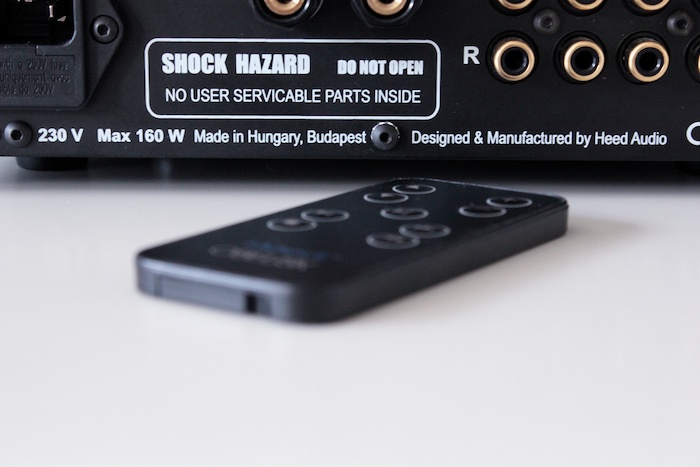 Completing the circle, Richard Hay is now back on board at Heed Audio in a consultancy/designer capacity.
Heed Audio’s latest iteration of the Hay-infused integrated is the Obelisk Si (AU$1600).  It retains the dimensions of its Ion predecessor but has some canny optional extras to keep things fresh for an audiophile looking to ‘think different’: plugin modules for vinyl geeks and digital audio freaks as well as a separate PSU box in the Obelisk X2.  The Obelisk package leans toward modularity.

Given that the original Obelisk was aimed at Naim people on tighter budgets, it’s no co-incidence that the Obelisk Si retains its redolence to the Naim Nait 2: half-width shoebox, big source selection knob on the left, big volume knob on the right.  Housed in an identically-sized case, the (AU$950, optional) Obelisk X2 is the Si’s own (Hicap-like) power supply, without which a shorting-plug is used on the rear of the Si to engage its own internal power supply.  SoNaim.  Si and X2.  Zsolt and Alpar.  There’s some neat symmetry right there. 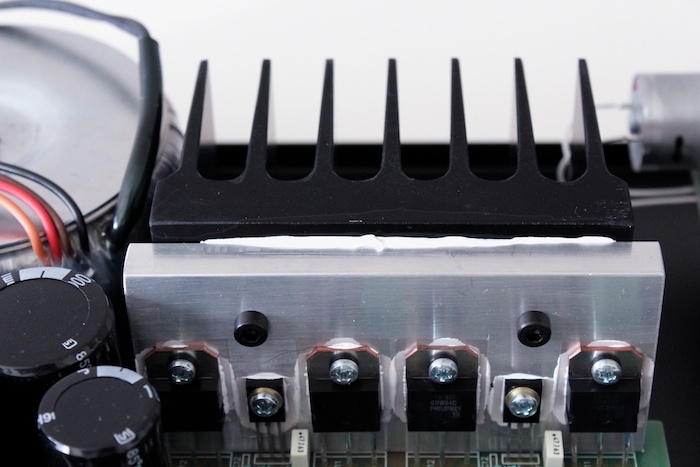 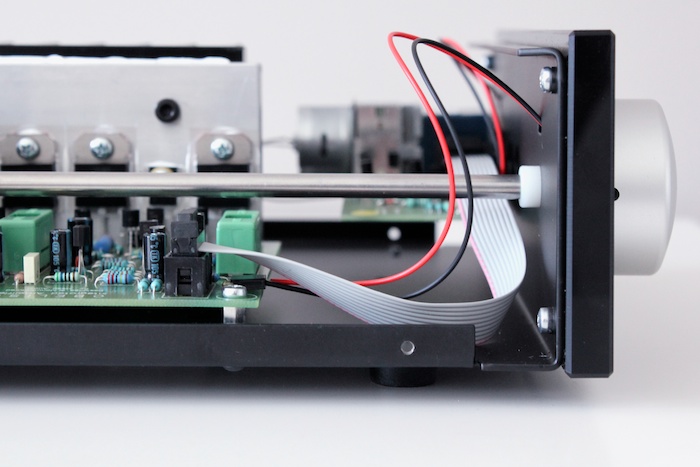 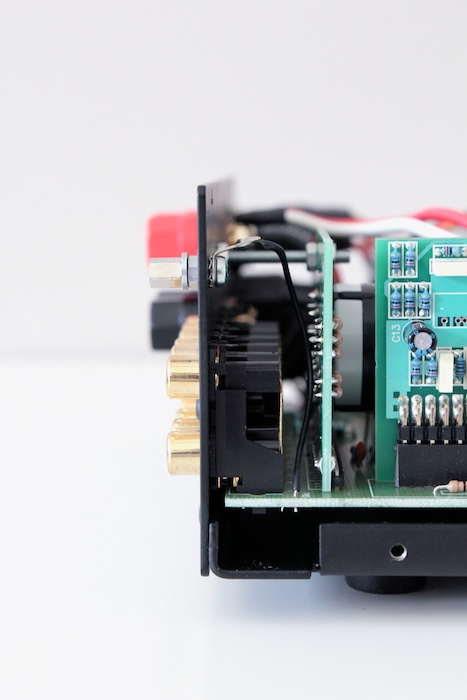 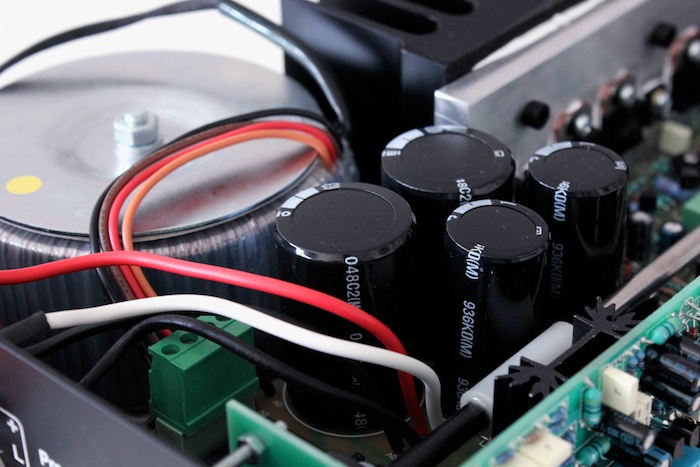 The Naim comparisons don’t end with aesthetics – there are some optional appendages that will put some Pink Fish-ers in a swim.  Pop the lid on the Obelisk and there sit two input slots for optional phono card module and/or DACtil v1.2 card module (AU$385).  Five source inputs in total line the back plate as well as pre-out connectors –  no DIN plugs here though, just RCA connectors.

Everything about the Obelisk pair feels sturdy.  Both the Si and X2 are reassuringly heavy and switches have a commanding feel.  Turning the volume knob feels like a BIG DEAL.

But wait!  Back it up a bit.  Did you see that remote control?  Only one notch above the credit-card-slim remotes that shipped with 1990s car stereos, it’s a remote control that strips all the enjoyment from cranking those SPLs – it feelslike no deal at all.  If something nice must be said about the remote control:  it works.  (Let us hope Heed have a better one on the drawing board already). 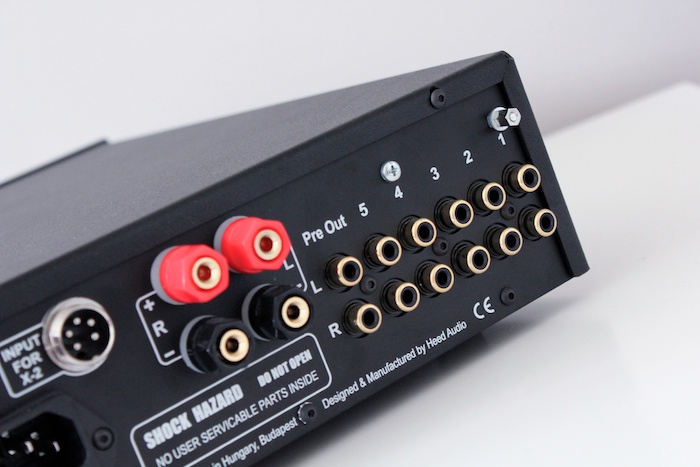 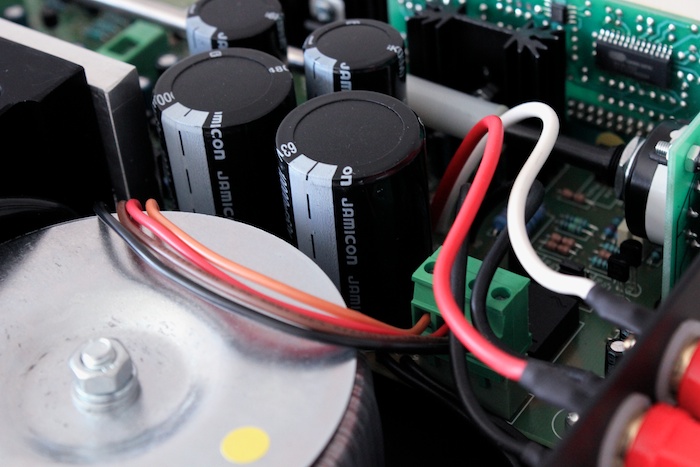 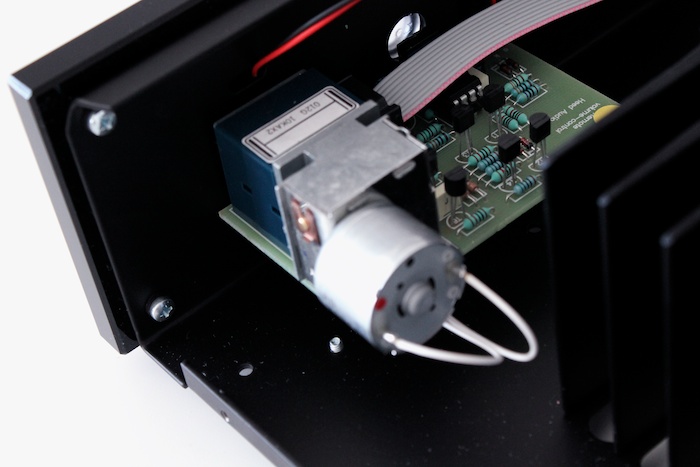 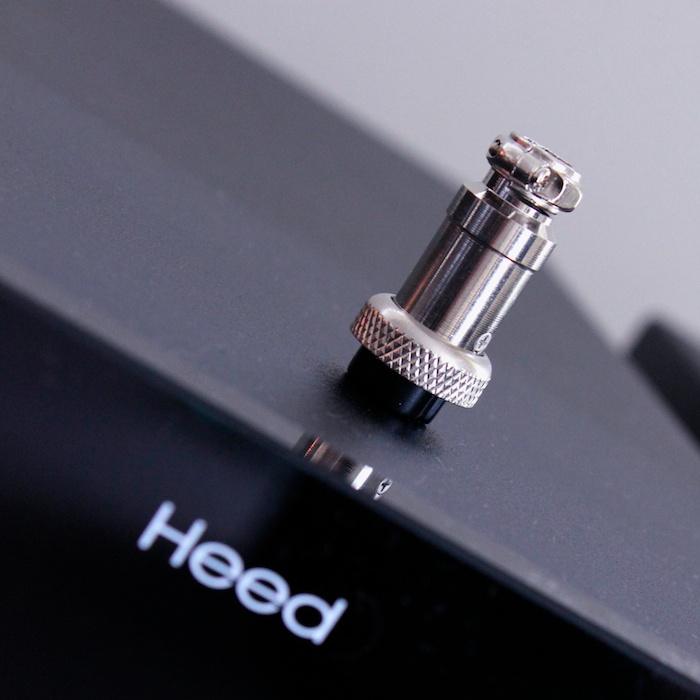 A good job then that DC DE-coupling resides within – design and implementation where it matters most.
Shorting plug in place, the (standalone) Obelisk Si was lassoed to a pair of Hoyt Beford Type I and off we went…….and nothing remarkable or magical exploded forth.  The sky didn’t fall in.  There was no hallucinatory revelation, no hallelujah moment or damn-splitting deluge.  The absence of any attention seeking behaviour is to be commended.  Conservatism abounds in both performance and wpc rating.  35 wpc into 8 Ohms?  The Obelisk plays like so much more.  Heed watts should be thought of as valve watts or (yes, again) Naim watts.

The Hoyts were switched out for a more pedestrian two-way – the Usher S-520 – and again nothing of note.  No additional spark of detail or thundering bass drive.  Just a smooth, energetic performance that married well with the oft hard-to-please baby Ushers.  However, the Obelisk Si’s initial apparent tendency towards politeness is ultimately revealed as a bona fide strength.  It would be near-impossible to become tired of – or exhausted by – this Hungarian. 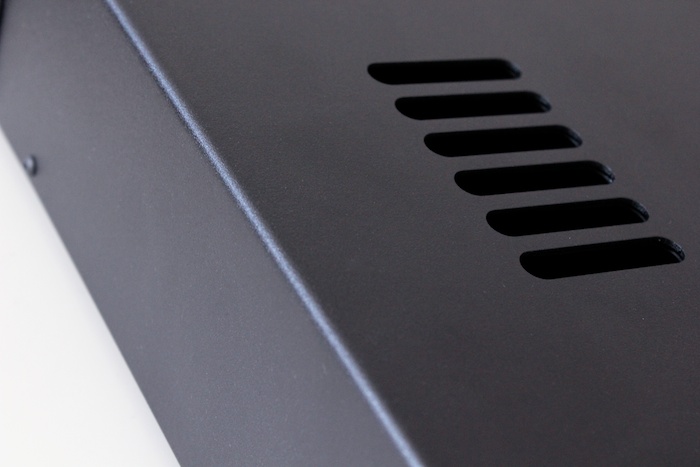 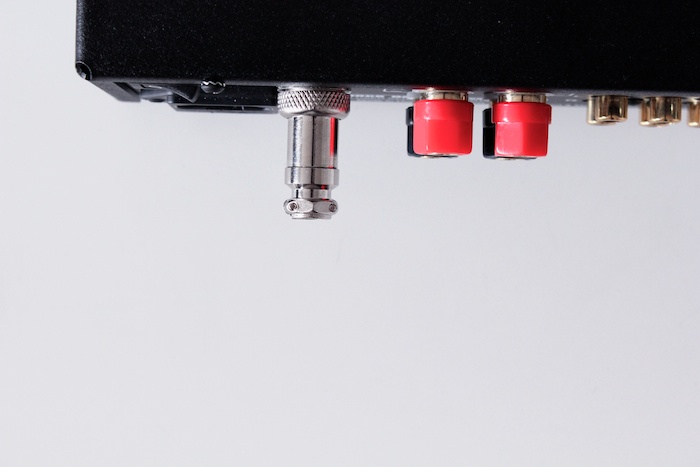 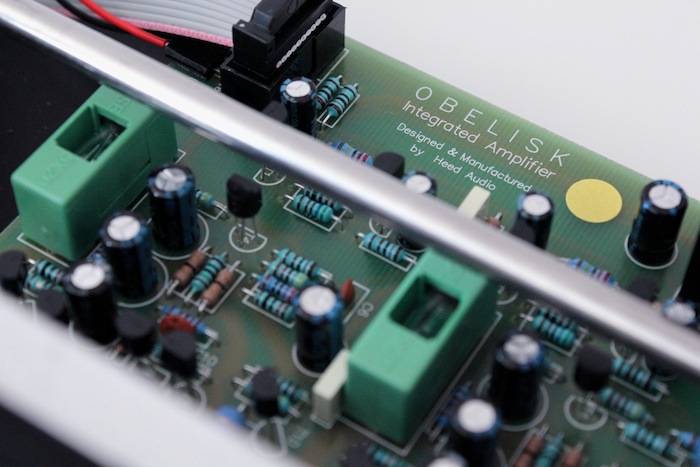 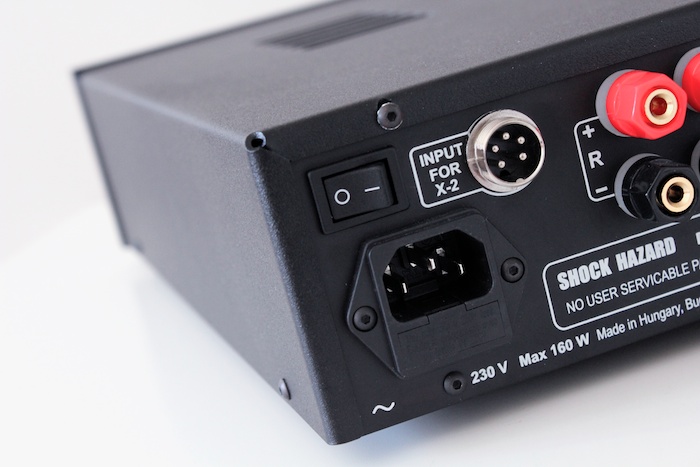 After a week or so of listening, the magic started to surface.  Slowly at first:  a foot tap here, a head nod there, some evidence of excitement (but no too much).  Scratch that.  The most appropriate word isn’t excitement, it’s *enthusiasm*.  Not a Johnny Yen lust-for-life barreling through Glasgow streets (“Trainspotting”, for those that aren’t movie trainspotters).  There’s an insistent, deeply seated groove that emerges midway through Robag Whrume’s superb Wuppdeckmischmampflow mix.  Percussion clatters and vibes float up top, but that ocean deep anchor is never lost, despite the maelstrom of the surface storm.  A rare feat; and my first glimpse into what the Obelisk is capable of as a long-term listening companion.  Like those Magic Eye posters, you have to tune out in order to see the what lies beneath (the surface).

Flying solo into the ProAc Tablette Reference 8s, the Obelisk reveals itself as capable of heft and delicacy.  A gentle giant.  Power when needed (the ProAc’s nominal sensitivity is 88db), finesse when needed (that ProAc tweeter needs careful handling).  The Obelisk integrated exposes the fluency of music without compromising on bounce and fun.  Through a magical sleight of hand, it teases out ticks and motifs that have been hitherto held back from the lime light.  Even amongst the brooding guitar-sludge of Interpol’s sophomore album, there is an abundance of “oh, I’ve never noticed that before” mental moments. 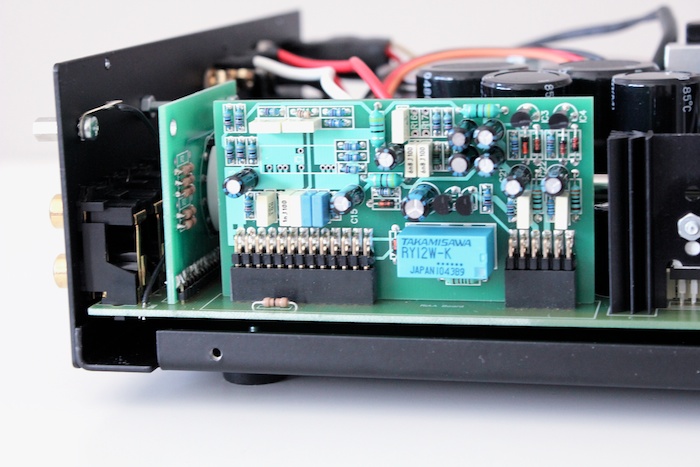 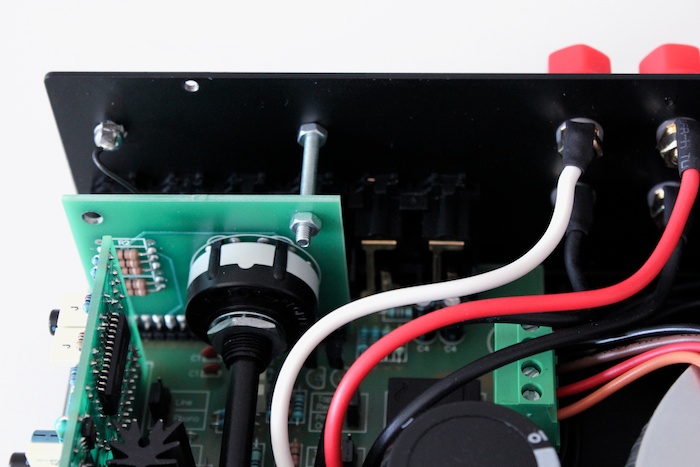 A direct comparison was made with the identically RRP-d Rega Mira 3 (AU$1600).  The Rega is the more expressive conversationalist – a forward mid-range with plenty of gesticulation, but thinner down below.  The Obelisk talks less, but makes every word count.  It’s more reclusive, more humid up top with a fuller figure.  The Mira 3 is contrasted as the more skeletal performer; endomorphic with mechanical music joints – a clear solid stater, with more space BETWEEN the notes.  Blind-folded, I reckon most seasoned audiophiles would pick the Hungarian as a tubular belle.

Enter 47Labs Lens as the standmount of choice and the Rega runs closer to electric-fence treble.  Yes, there’s more metallic shimmer – great for some electronica – with standard rock fare it’s more anxious than it is enjoyable.  The Lens/Mira pairing is not a good one.  In Japanese company, the Heed Obelisk is (paradoxically) composed and relaxed – the Lens/Obelisk is a terrific combination.  The Obelisk’s fuller, warmer tonal density and more commanding presence shows why synergy matters in this game.  The Rega is more precise in its instrument staging and is (overall) much better suited to the ProAcs.  The Obelisk’s sound is genetically closer to the valved-up Weston Acoustics Troubadour – think midrange olive oil infusion compared to the refreshing crunch of the Rega’s iceberg lettuce. 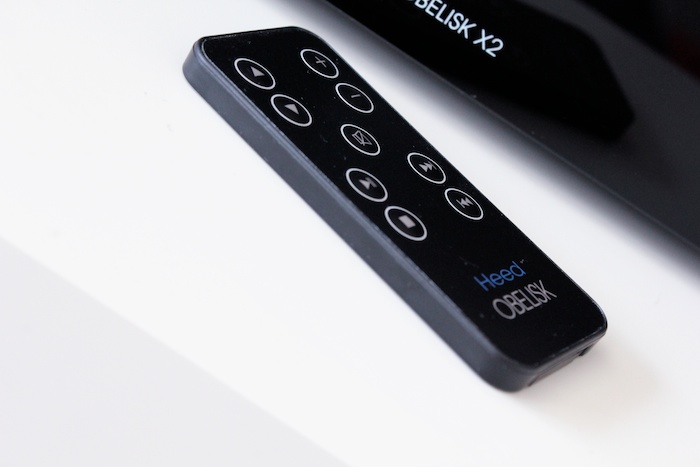 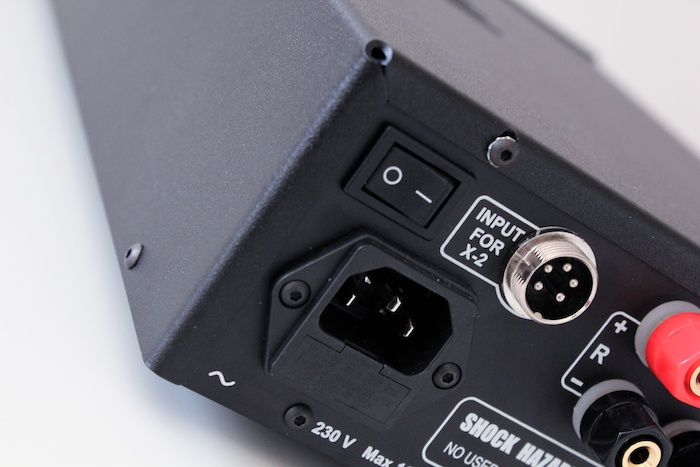 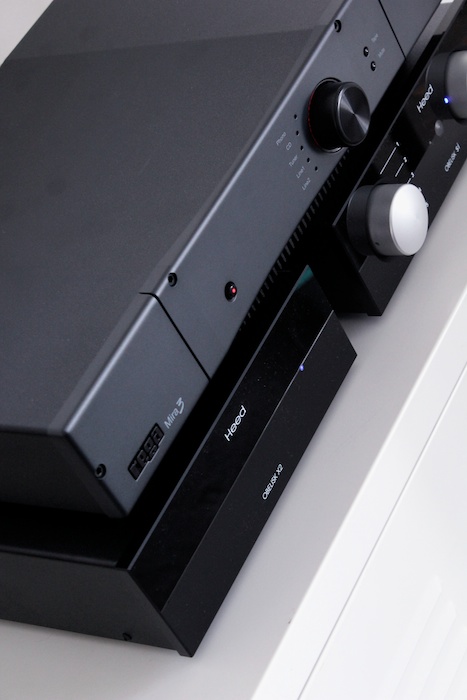 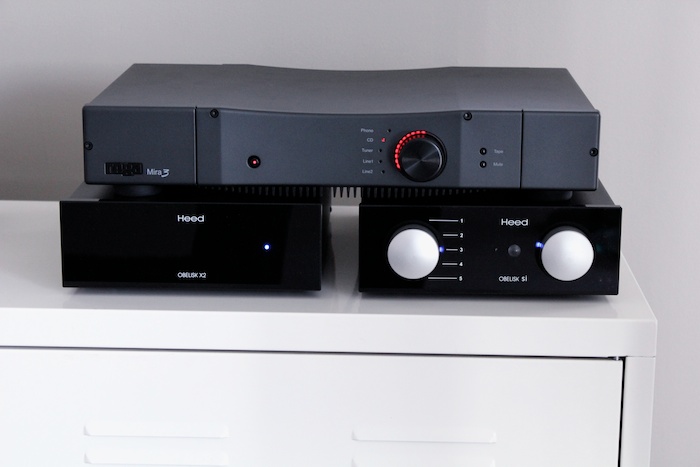 Umbilically linking the X2 to the Si brings performance gains, yes, but ones that are more notable with less efficient loudspeakers.  That’ll be the ProAcs and the Ushers then.  Sound-staging is locked down tighter – and is deeper – with the wpc ante upped to 50.  50 BIG watts – you will want for nothing.  I could barely push past 10pm on the volume pot before proceeding became too loud.  It seems almost to redundant to point out that the Obelisk Si is more dynamic and refined when fed by its power-supplying sibling.  With Kraftwerk’s electronic 70s meisterwerk, the emanating sound is more specific with sonic ideas and offers greater forward momentum.  Some people – Naim people – might call this better PRaT (that’s pace, rhythm and timing to non flat-earthers).

Here is a unique sound in the world of affordable hi-fi:  sun-inflected notes that don’t melt in the mouth; warm (ish) hues that retain poise and (bass) definition – yes, even at the edges;  speeding car momentum that is super keen.  Wir fahr’n fahr’n fahr’n auf der Autobahn. 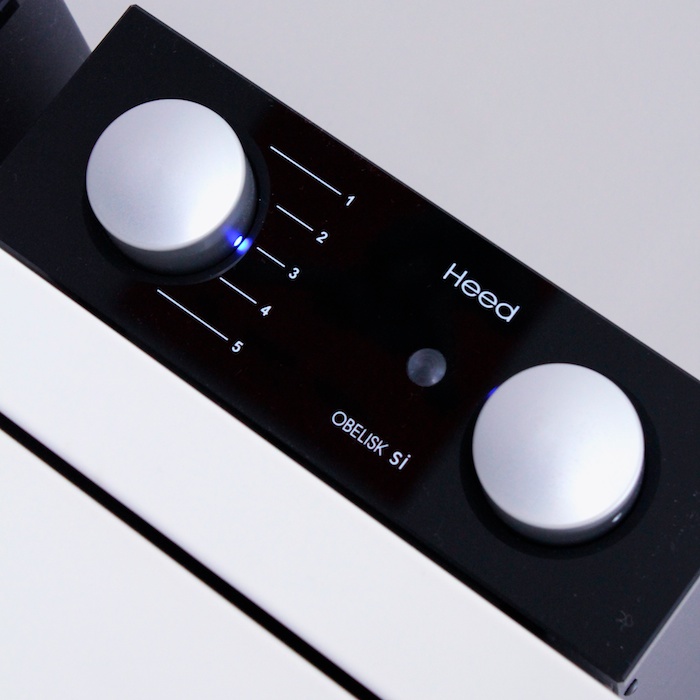 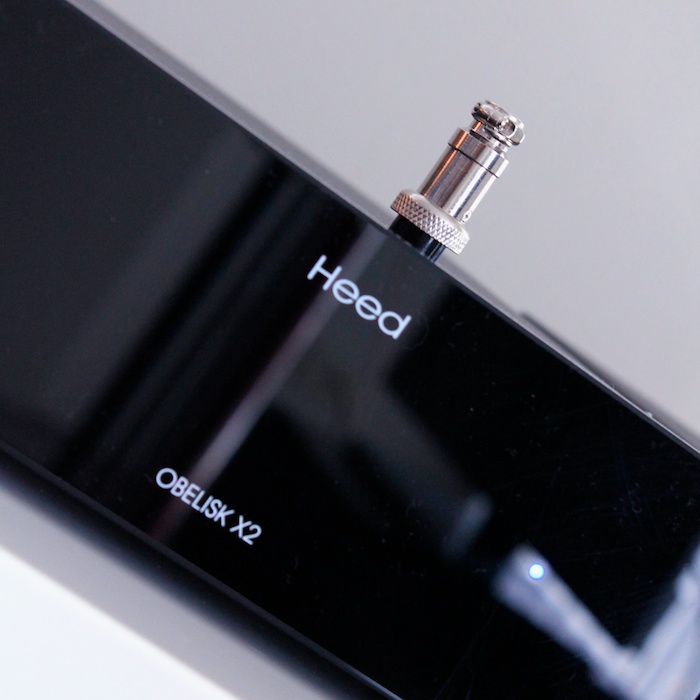 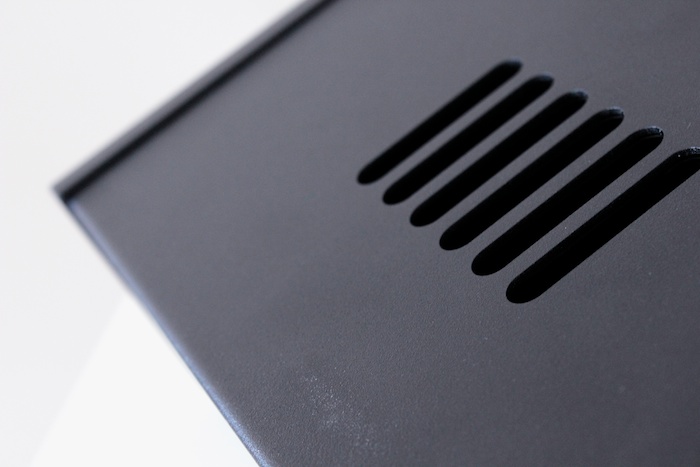 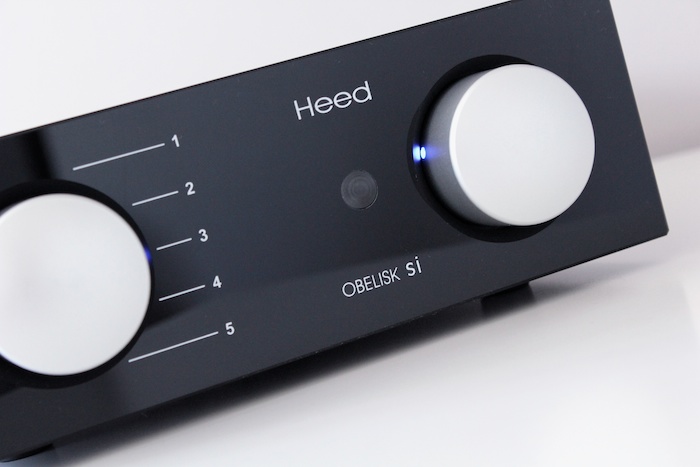 The Heed Obelisk is an integrated amplifier that offers the humanism of tubes and the ‘snap’ of Naim.  If you’ve heard an Audio Analogue Puccini, you’ll know where I’m coming from.  If you sit and listen intently, the talents of the Obelisk Si won’t be immediately apparent.  This isn’t naked-Emperor marketing gimmick-ery.  This waiting game is real; one that nullifies those hours spent on A/B switch-overs.  It’s impossible to know whether you can live with something as personal – or as personable – with a 45 minute in-store dash through your favourite songs of all time.  Richard Hay’s Ion original has evolved at Hungarian hand into an amplifier whose less-than-immediate talents rewards patience.  You don’t find the Si’s talents – they find you.  This DC de-coupled amplifier is seriously impressive. Hungary’s Heed Obelisk Si is an impeccably realised unit with talents that work their way under your skin and into your system.

📽️ New video 📽️ now up on the YouTube ch

Chromecasting a bit of drum and bass 💆 #darkoau

A streaming DAC from @lumin__music with two twists

The @naimaudio Uniti Atom is a tidy piece of #futu