One of the most cliched concluding lines of the (lazy?) hi-fi reviewer is “product X competes with items three or four times the price…“.  Luckily for the high(er) end, rarely are names named.  However, such phrasing underscores the importance of context.  If the Anedio D1 DAC (US$1270) were to be reviewed in isolation, claims that its sound were ‘sweet’ or ‘detailed’ would lack serious foundation; you’d be none the wiser as to how good/bad it sounds because there’s no context, no contrast.  The competition provides the comparative climate – but it doesn’t have to be competition that costs three or four times the price.  Few would compare Addis Ababa to Zurich. 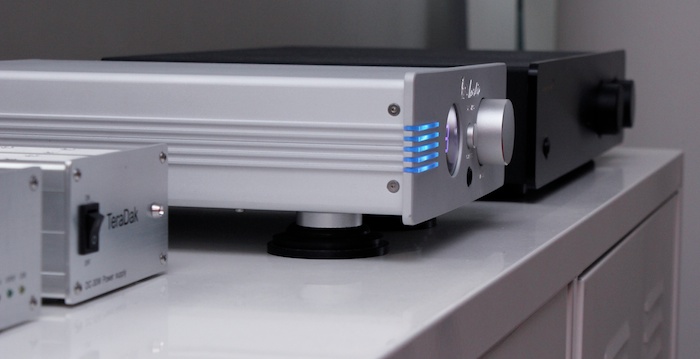 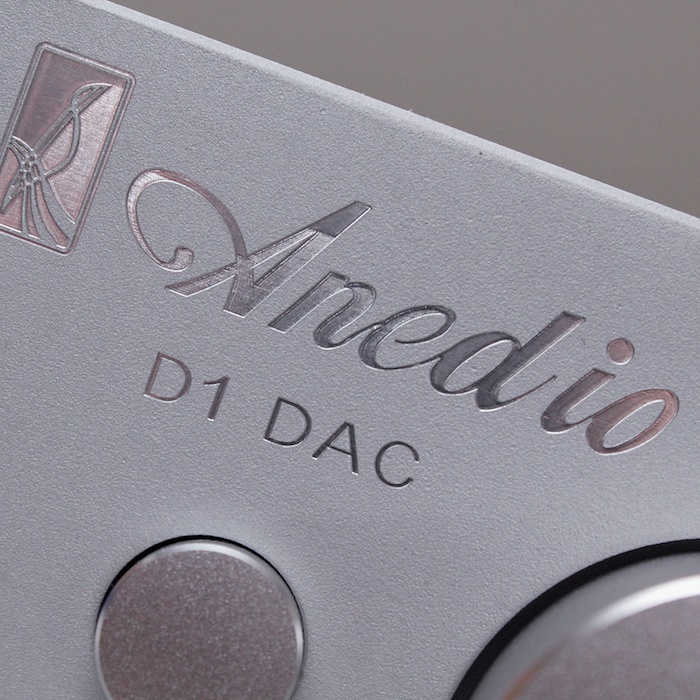 New York vs Los Angeles.  Los Angeles vs New York.  A long-standing rivalry between two cities that are culturally and climatically very different.  Ditto Melbourne vs Sydney.  In Australia, Melbourne and Sydney continuously duke it out for “best city” accolades.  Some people swear on Sydney, for others it must be Melbourne. Despite the pointlessness of such ongoing one-upmanship – to keep the Sydney Morning Herald or the Melbourne Age in editorial copy –  personal preference is locked out of the argument by quality-of-life quotients and living standards surveys.  It’s not about personal choice but about statistics.

(Head-fiers will be familiar this — AKG vs Sennheiser continues to rumble).

(Preferring first name terms), James at Anedio Audio is feeding the armchair audiophile’s love for (statistical) data direct from his website.  The D1’s measurementsare thorough and – for the less-technically-minded – bewildering. 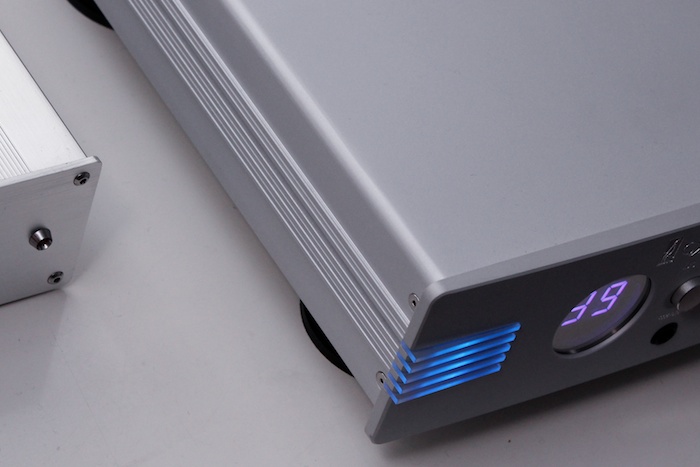 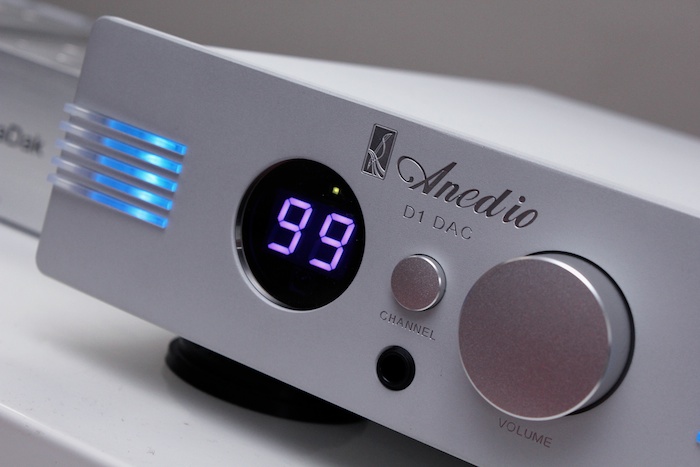 Read all the brochures you want.  If you wanna know if Melbourne bests Sydney (for your lifestyle), you gotta go visit.  With DACs, the mountain was shipped to Mohammed…

…and so the Anedio D1 DAC arrived with the future in mind: to keep distributor/retailer mark-ups from smearing the price picture, it’s sold direct from Anedio HQ in New Jersey to anywhere in the world.  Potential buyers note:  packaging and documentation is A1.

Derriere-connections run USB (driver-free, adaptive, 16/48), BNC (24/192), coaxial (24/192) and optical (24/192).  Fit and finish is several notches above Chinese rivals: the casework is 0.15 inch aluminium (thus so to minimise “acoustically induced vibrations”) and has a convincing feel to touch.  The pointed, conical, metallic feet will scratch benchtops (I found out the hard way) so user intervention is required.  I went for a quartet of rubber isolation feet as well as some tupperware jar openers.  Those orange latex squares are soversatile! 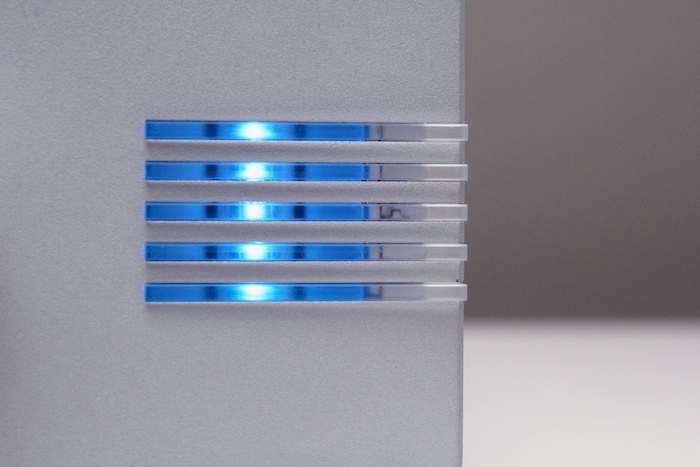 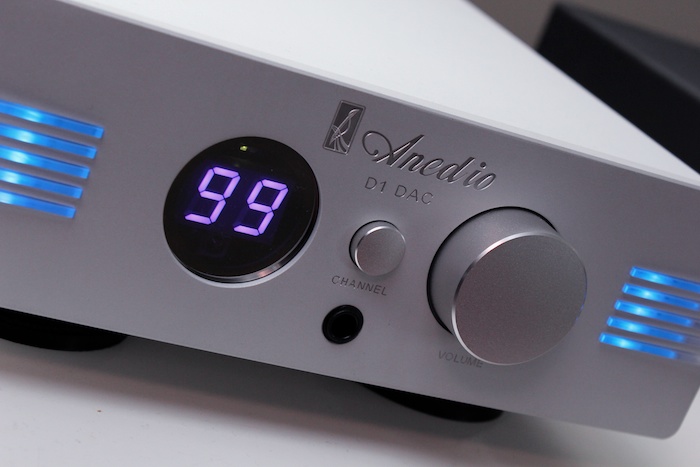 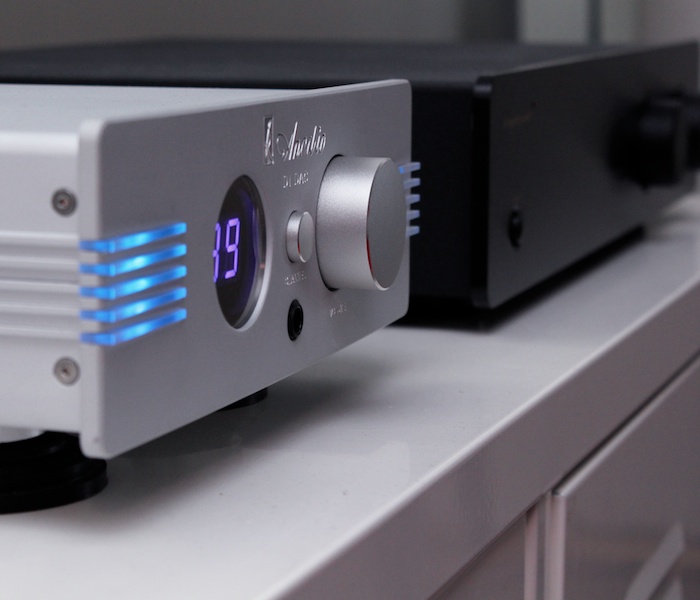 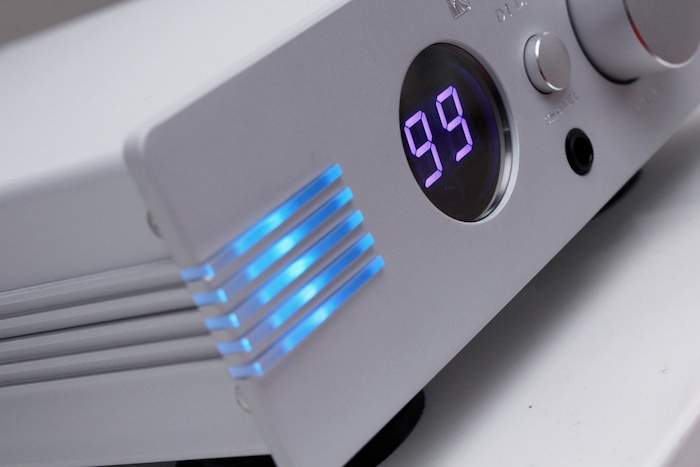 Blue ‘strip’ lights that adorn the left and right of the front fascia – pure Space 1999 – and the source/volume display can be read easily from the across the room. A comfortable, chunky Sony universal remote controls either.

Many seasoned digital audiophiles will know that digital volume attenuation hides a dirty secret – data ‘bits’ are thrown overboard as volume levels head south.  It’s James’ ability to break it down for the rest of us that is wonderfully encouraging.  As the Anedio D1 doubles-up as headphone and (passive) pre, James knows that armchair audiophiles will fret about the ideaof digital volume control.  The D1 DAC’s volume attenuation has been (over)-engineered to accommodate theory as well as reality: 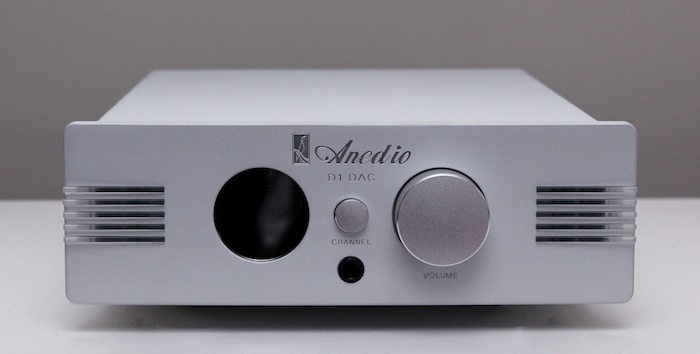 “The digital volume control is often seen as “bad” because as the volume is decreased, the bits are lost. In general, for every 6 dB attenuation, 1 bit is lost. For example, if the digital volume is set to -12 dB, then 2 bits are lost. This is a serious loss of resolution if the DAC has only 16 bits to begin with. However, this is no longer an issue with the 32-bit ES9018 DAC. With the full 32-bit data path, the digital volume control has more than enough resolution to accommodate the loss of bits. So the loss of 2 bits, as in the example, is practically inconsequential to the 32-bit DAC.”

“In the D1 DAC, we actually use a combination of 32-bit digital volume control and a 9-dB relay attenuator.” 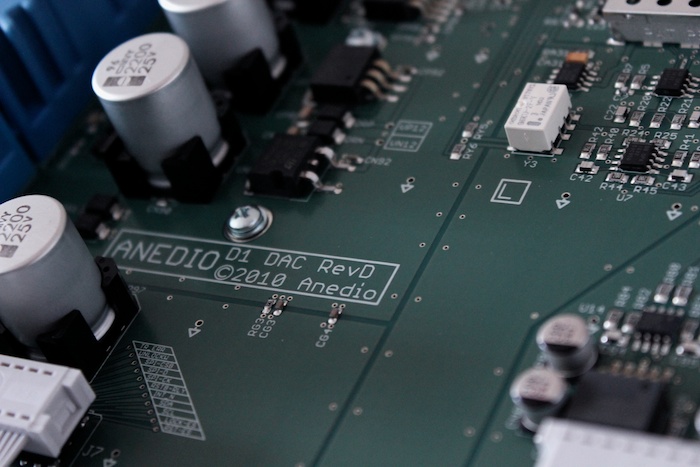 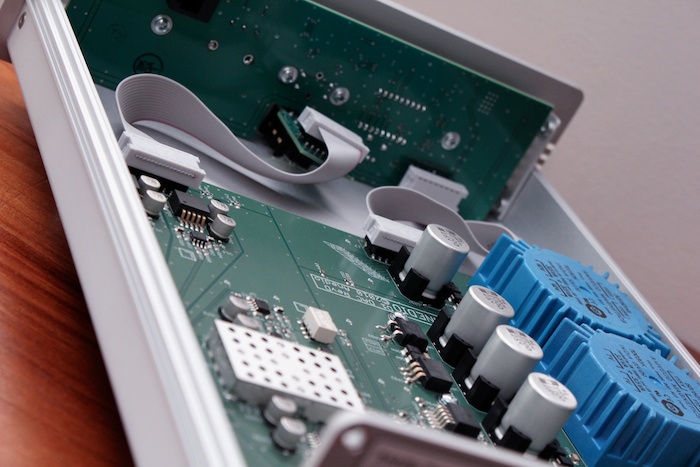 “Why add the 9-dB relay attenuator? It is a recognition of the fact that most users will be listening below this level. In general, the gain of the analog path is too high, so the user often has to turn down the volume significantly, perhaps between -10 and -20 dB.” 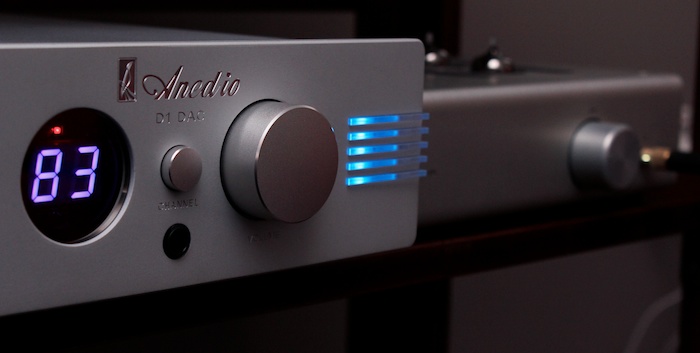 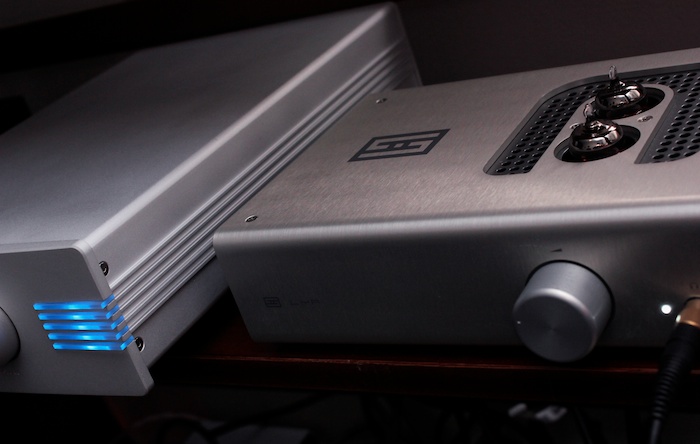 The Anedio D1 runs with the ES9018 Sabre Reference 32-bit DAC chip.  It’s EMI shielded.  Little surprise then that the company’s jitter minimisation philosophy centres around the Squeezebox Touch – the ESS silicon sports its own in-built anti-jitter circuits and the precursive handling of ones and zeroes is exacted by a Wolfson WM8805 receiver chip.

Competition contrast:  the ES9018 can be found in the Wyred 4 Sound DAC-1/2 and Eastern Electric Minimax; the Signalpath/Peachtree boys are also knee-deep in ESS Sabre: their iDac and iNova both run on ES9016 32-bit fuel whilst the iDecco is starting to look positively old school with the 16-bit ES9006. 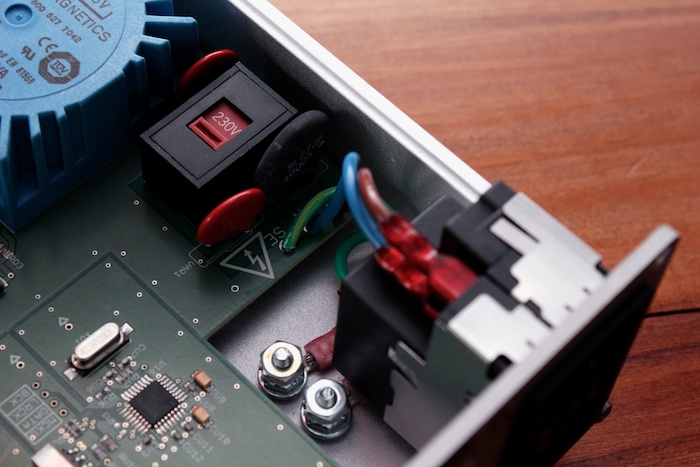 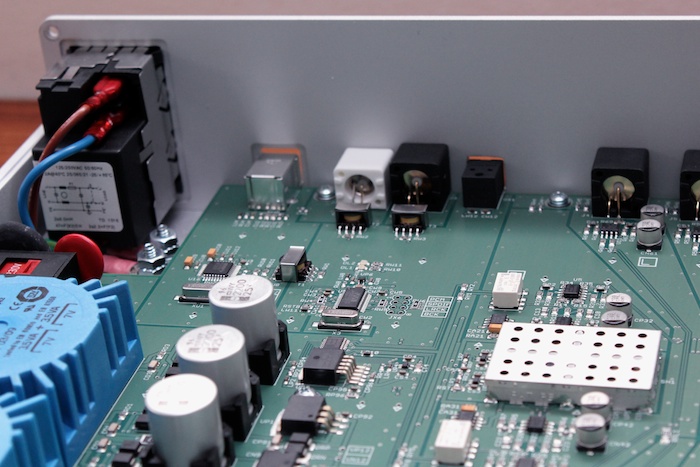 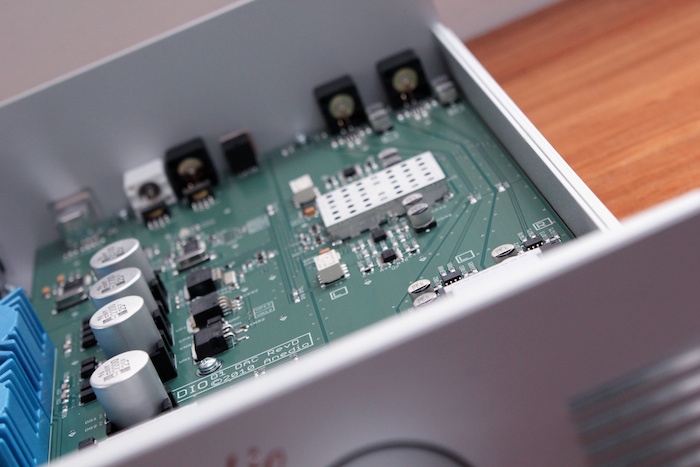 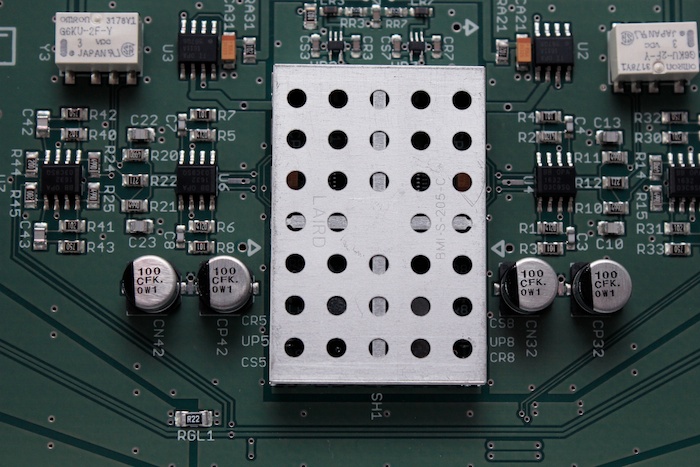 The reputation of the Anedio sound preceded its arrival.  A friend had recently enjoyed the immediacy of same-time-same-place DAC comparisons at a UK headphone/DAC bake-off.  (That all-important) contrast with the two other Sabre-chipped DACs: the Chinese Audio-gd NFB-7 (US$1380) and the South Korean Calyx 24/192 (AU$1790) – “The Anedio spanked them both on transient bite and overall holography – I’ve ordered one.”, he wrote.

Not necessarilybetter (I thought), but enough to warrant further investigation. 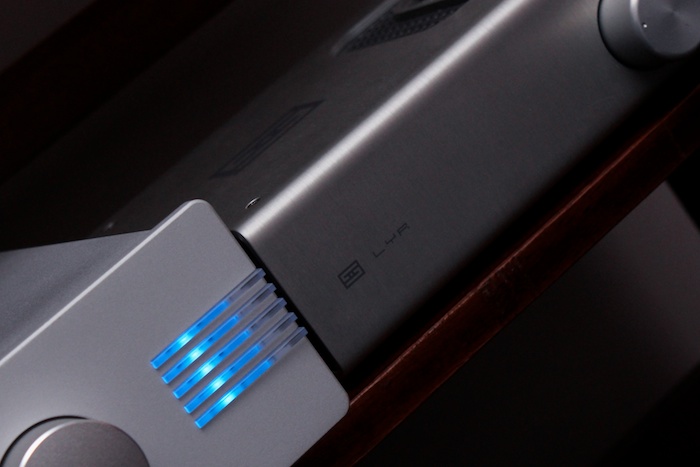 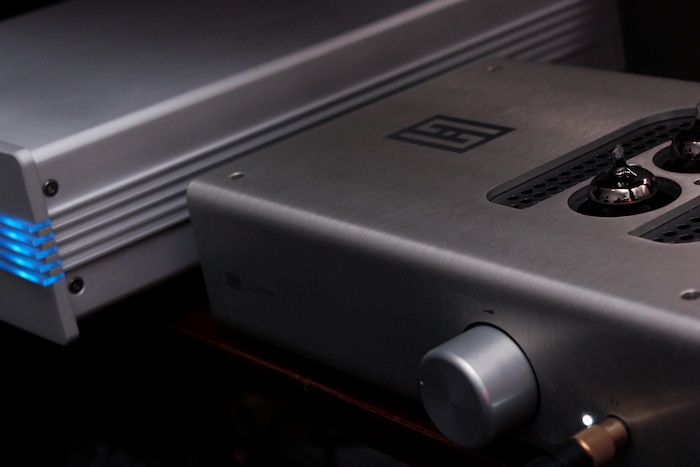 Then a Head-fier proper gave it a rave…

In a recent interview with Mike Scott (of the Waterboys), he explains the demo recording process that preceded This Is The Sea:  just Scott, his producer and a piano at Parkgate Studios.  These recordings have now been released as The Piano Demos For This Is The Sea.  After a couple of weeks of casual listening in my main room, the Anedio was moved into my headphone rig (Schiit Lyr/AKG 702) and I hammered this album several times one gloomy afternoon.  Captain Obvious stopped by for afternoon tea to conclude that the D1 DAC roundly spanks both the Squeezebox Touch analogue outputs and the TeraDak Chameleon.  Its ability to immerse the listener is a soup of prismatic detail is striking and immediate:  every page turn of Scott’s songbook, every creak of the piano lid, every master tape drop-out.  It’s all here.  There’s even a pervading sense of the size and nature of the recording studio.

Allow me to strike a bum note at this juncture: the Anedio’s headphone stage and AKG 702 cans ain’t a good pairing.  They sound thin, lifeless and seriously lacking in bass.  My friend – over for the afternoon – agreed.  Ultrasone DJ1 Pros faired much better. 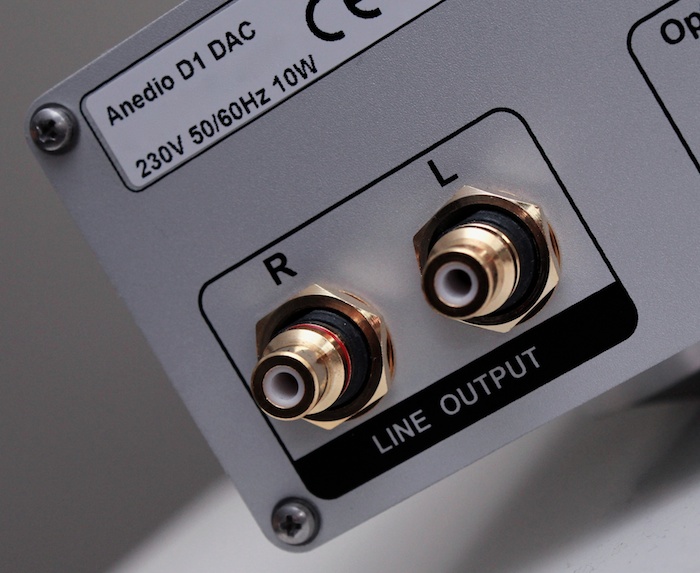 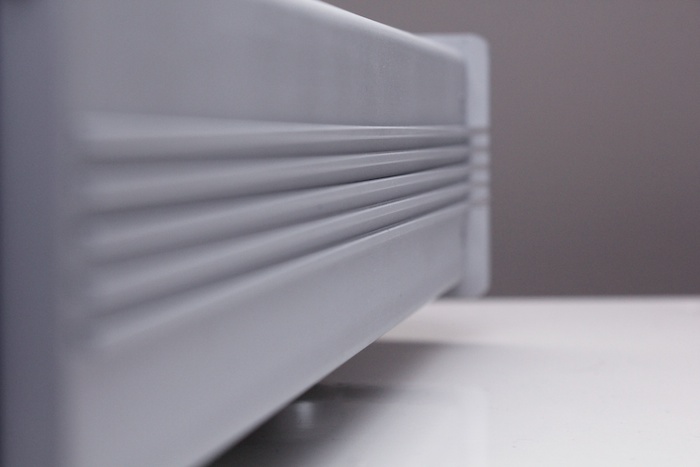 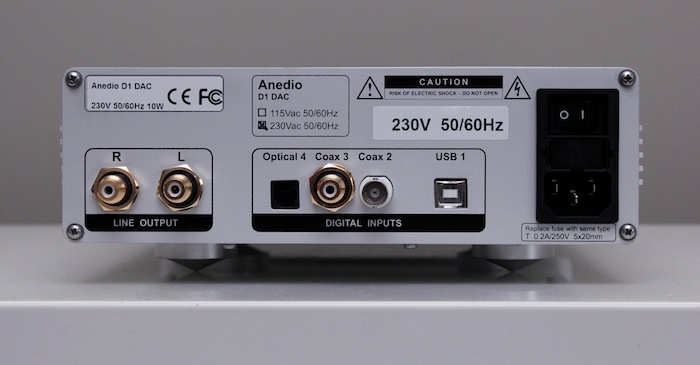 As a pre-amplfiier, the D1 fares better.  MUCH better.  Feeding a Trends TA-10.2 (configured as power amp), lovers of accuracy would think they’d found the mother lode.  I didn’t run out of volume-dial head room either, even when pushing more inefficient standmounts (ProAc Tablette Reference 8).

Like other Sabre implementations, it is a sound illuminated from within.  I noted caffeinated energy without the subsequent mid-afternoon slump.  It flows fast with electronic music and there’s a tip-of-the-tongue sweetness that took some time to show itself – think chocolate-covered coffee bean.  Switching amplifiers from the Weston Acoustics Troubadour to the Exposure 2010s2 didn’t change the flavour beyond what I already know to be each integrated’s own characteristics.  There’s a certain mot juste with the Anedio D1 that isn’t as prominent in the cheaper EE Minimax and (definitely not) the more expensive Wyred For Sound DAC-2.

The D1’s midrange is all summer breeze and poolside tanning, yet it favours a bass bounce that’s fit and well toned (and free of flab).  Dynamics are positively sinuous.  A lean toward upper-mid presence finds favour with leading edge guitar notes, percussive counterplay and – classical fans take note – string definition.  The cello that drives Robyn Hitchcock’s Tromso, Kapteinis stripped of obfuscation and is laid bare in the afternoon sun. 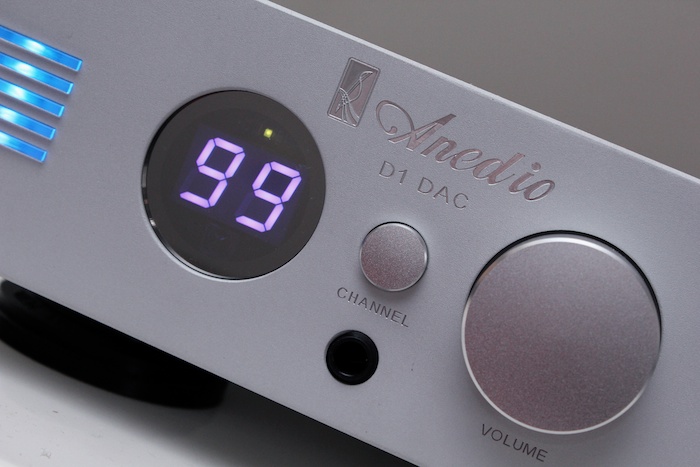 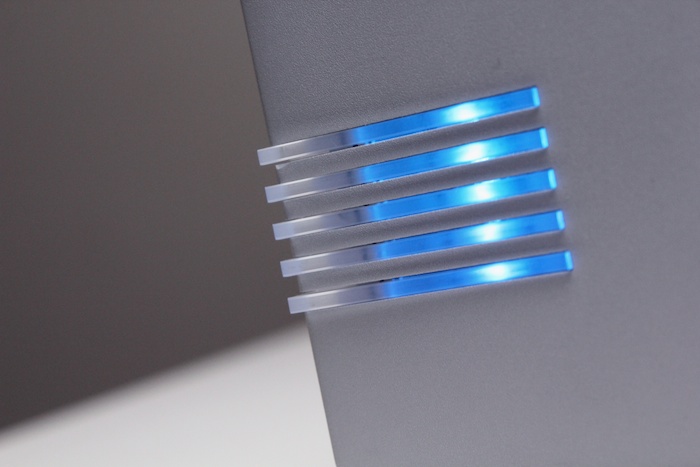 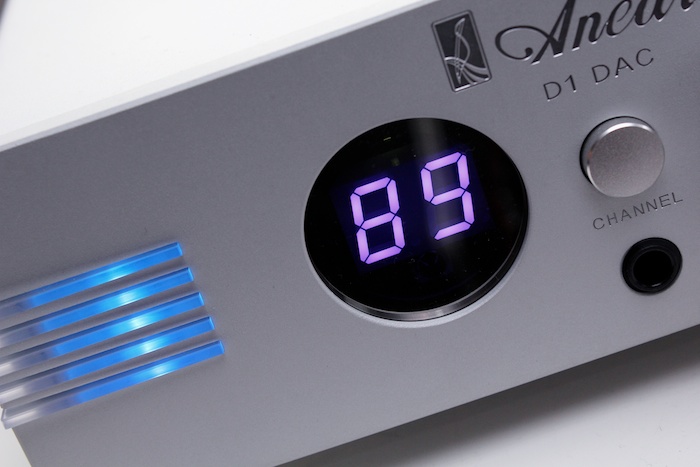 A DAC that’s pure Sydney springtime.  It’s got tits and teeth and isn’t afraid to expose either.  Running the Anedio back to back against the Audio-gd Reference 7.1 confirms it.  Kingwa’s house sound hails from Melbourne – it’s slightly more reserved, more cultured and the least nervy of the two.  Picture David Byrne twitching his way through a solo Psycho Killer in Talking Heads’ Stop Making Sense concert movie.  That’s the Anedio D1 DAC.  A new sound from familiar roots that trades more heavily in the demystification of music by exposing delicate timbres and rhythmic drive.  The Audio-gd and Anedio take different routes to reach similar destinations.  The D1 takes the floodlit freeway, top down, foot to the floor – definitely the more youthful of the two.  It is never tiring – even with guitar-driven indie rock (hello Clearlake). There’s too much fun going on to ever cause the listener to quit and – like Sydney – there’s an easily overlooked artistic core that supports pop art and more ‘serious’ endeavours.  It ain’t all wam, bam, thank you ma’am.  Richness of texture and tone abound throughout the acoustic strums and vocal angst of Richard Thompson’s “Money Shuffle”.

Another week, another set of duelling pistols and fresher ears from this reviewer.  Consider an alternative analogy:  the Anedio presents as milk chocolate, the Reference 7.1 as 70% cocoa-heavy dark.  Some folk will prefer Cadbury sugar-immediacy over Lindt’s headier (Swiss) flavour depth.  Contrasting elsewhere: the Anedio D1 stirs a dollop of honey into the EE Minimax’s (Wagga Wagga!) citrus flavours.  Not a thicker sauce, but one that’s sun-kissed.  In contrast, the Wyred 4 Sound sound is pure Canberra: efficient, thorough, cool(er). 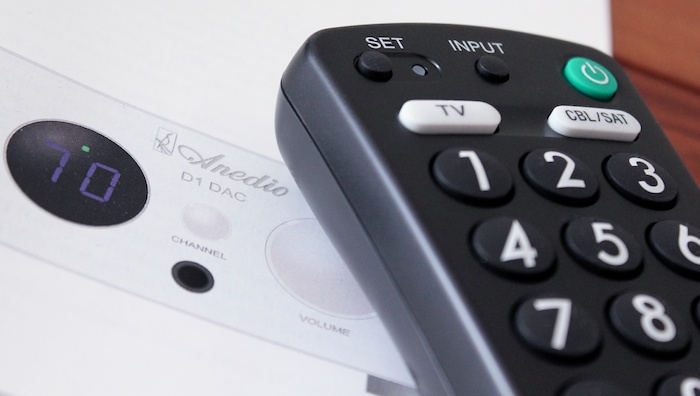 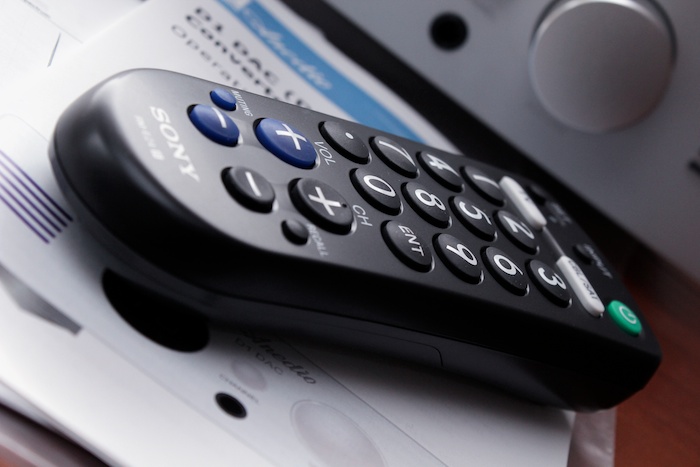 The D1’s up-up-and-away-levity of midrange leads the listener through a rapid ascent to higher and cleaner air.  A sound that’s less reliant on ground anchor than the Audio-gd behemoth – it is keener on music as terra-firma hugging traffic.  Say what?  The D1 flaunts vocal float – a sense of mid-air suspension – whilst the Audio-gd connotes a better notion of body behind the vocal.  The New Jersey fella pips the Chinaman to the post when directly comparing treble extension.  The Anedio’s glass ceiling allows more daylight in than the cooler, damper Audio-gd church.

As your digital audio source chain – transport, DAC and power supply – improves, you should hopefully acknowledge find music easier on the ears and nerves.  It isn’t always about resolution.  Over and above most budget (think: Music Has The Right To Children in 24/96, from the (Soundcheck-modded) Squeezebox Touch into the Anedio D1:  composed, smooth, sunlit. 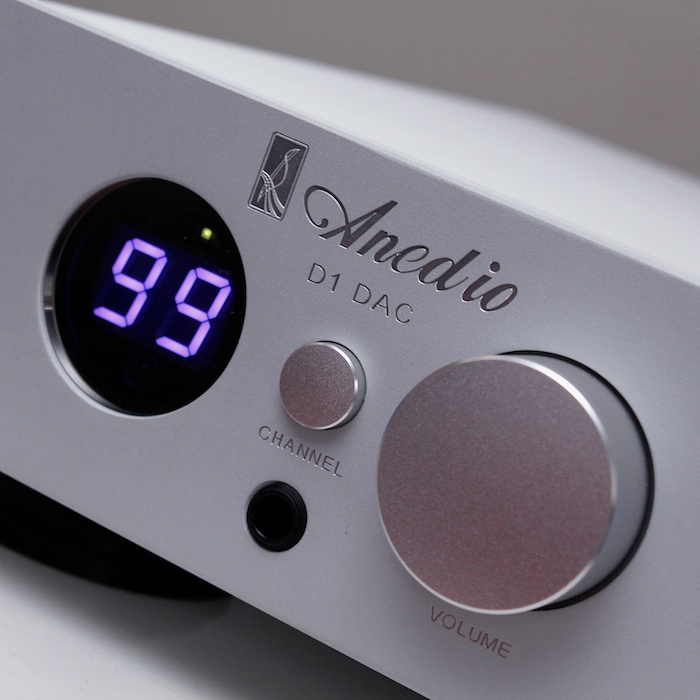 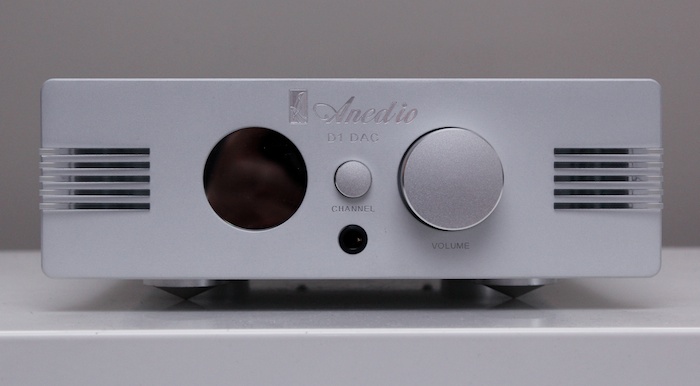 So……Melbourne or Sydney?  They’re both fantastic places to live.  Neither is better, nor worse – they’re just different.  The Anedio D1 competes with the Audio-gd Reference 7.1 (but the latter doesn’t costs two or three times the price – ha!).  Anedio has hit the sweet-spot on the price-performance see-saw and it’d be a hard-nosed audiophile that doesn’t find many hundreds of hours of enjoyment from this expectation-exceeding box.  Want a detailed, fast sound full of natural tones and timbres?  This is your guy. With a fast and directly-sunlit sound as well as pre/head-amp functionality, the Anedio D1 offers a considerable step up the digital source satisfaction ladder.

Not dead yet #DarkoAudio #MusicFirstAudiophile #CD

A big deal for quite a few folks. LINK IN BIO. #Da

NEW *beginner-friendly* video now up on the YouTub

We shall be lost in time forever @cherryredrecords