A man with two watches never knows the time.  Similarly, a man faced with two opposing opinions might not know what to think.  Separated by nine months, so ran my experiences with the Dayens Ampino…

My first date with the Dayens integrated took place in August 2010.  She was the first (and only) amplifier to inject some much needed grit into the overly smooth/refined upper eschelons of a pair of ATC SCM 11s.  She was sand in the vaseline, a trouble maker.  Feisty and fresh on the mouth – an amplifier that wanted to punch on with the big boys.  That was, until a very German big boy drank the Serb under the table (and the she ran away to Canberra).

On paper, this should never have worked:  a 25 wpc shoebox pushing 85db, sealed standmounts.  But the synergy was a special one.  A synergy that proved harder to nail with Dejan Dobrin’s own little – and insanely inefficient (84db) – Tizo loudspeaker.  Both Tizo and Ampino enter the mainstream from the cheap and cheerful on-ramp, but don’t ride too well in tandem with each other. 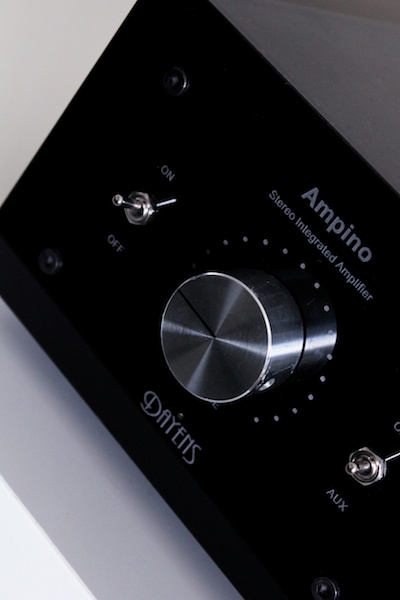 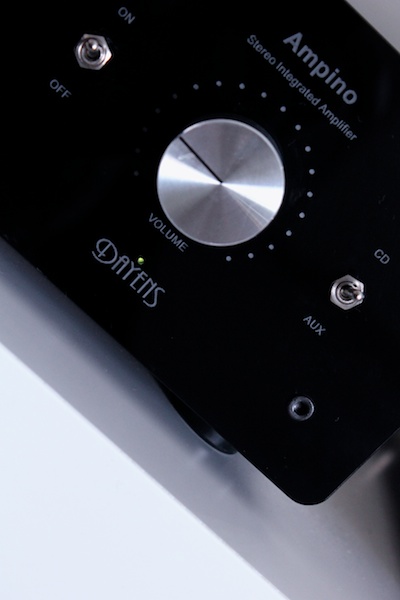 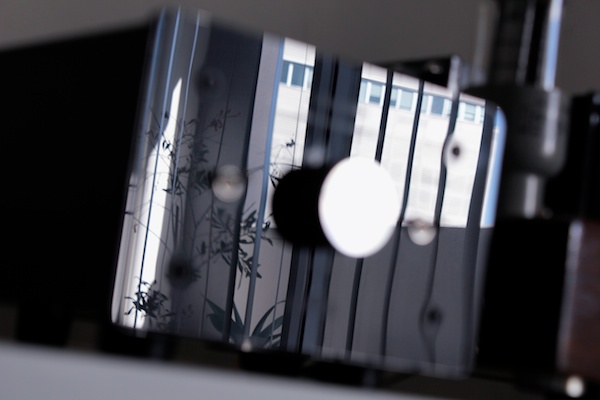 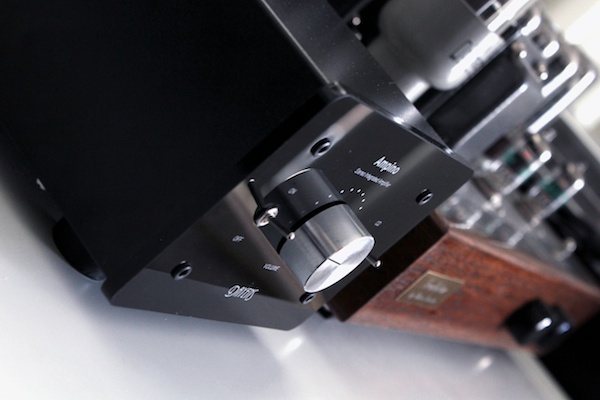 The Ampino’s aesthetics are somewhat plain – no more than one would require: volume pot, power on/off and source selector (CD/Aux).  The exterior speaks of a no frills, home-branded design.  It very nearly subscribes to (cliched) Eastern Bloc utilitarianism: the ‘jiggle’ in the volume pot will bother more aesthetically sensitive customers.Dobrin is no new kid on the block.  He’s been kicking around as a bona fide audio manufacturer since 1991.  That’s twenty years of relative obscurity to take audio beyond the satisfactory and onto something quite special.

“My father, Mr. Dejan Dobrin, transferred passion for music and audio to me.  Live and natural reproduction is what we are expecting (and receiving) from our products.  We simply love music and by making products which are neutral medium between artist and listener in the music reproduction chain makes us, in some way, a part of music.’

“The idea of being a part of music makes us happy, especially when owners of our equipment are also happy and enjoying music through our products.  Music (and high-quality reproduction) is not the privilege, it is an everyday need and we strive to make high-quality products for very reasonable and attractive prices.” 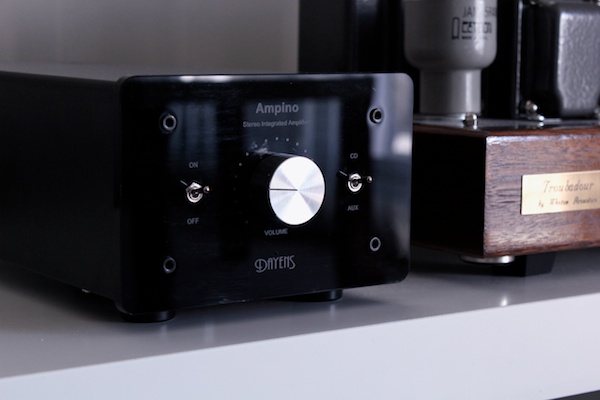 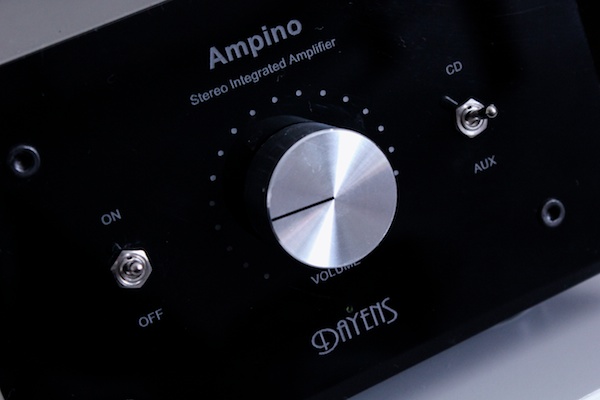 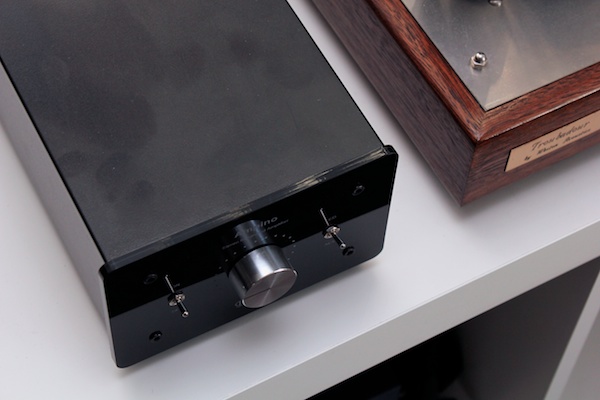 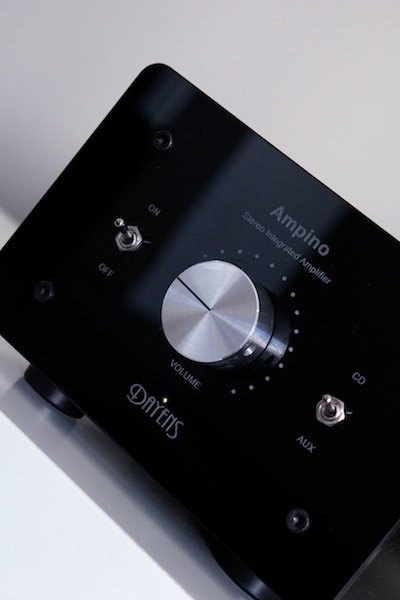 The export Ampino also sports some improved capacitor deployment: 2×10.000uF Mundorf capacitors in the power supply section (instead of stock ones) and Mundorf ZN (instead of Mundorf MCap) for the input zone.  Keeping national pride true and honest, fellow Serb Sasa Cokic (of Trafomatic Audio) manufactures the conspicuous transformer that sits inside each tin box.

I won’t lie – my first Ampino suffered transformer hum.  A quick email exchange with Zoran diagnosed this as more quirk than flaw:  a 220V PSU being fed by Australia’s 240V+ could cause such minor irritation.  Interestingly, my 2011 model bears no such issue.  Ho hum.

Getting an Ampino to your door is not a simple as the (bargain) 220Euro sticker price would suggest.  Shipping from Serbia to Australia ain’t cheap and Dayens don’t do PayPal or credit cards.  You pay by wire transfer.  (They’re legit, so worry not).  All up, you’re in for around AU$600.

With C’monLow have lifted the pace of their usually funereal acoustic strum to encompass more optimistic expression.  The Harbeth P3ESR know how this plot goes.  It’s their favourite meal:  organic-fed vocal.  The little Serbian box might run short of the power needed to put the foot flat to the metal, but instrumental separation is immediately apparent.  Guitar, lead vocal and vocal harmonies are presented with sure-footed precision, signifying solid listener engagement on the PRaT front.  A switch to Thomas Fehlmann’s ambient-techno thrust – where rhythm mixes it with texture – confirms that this is an integrated amplifier that can present the complimentary nature of sweet and sour. 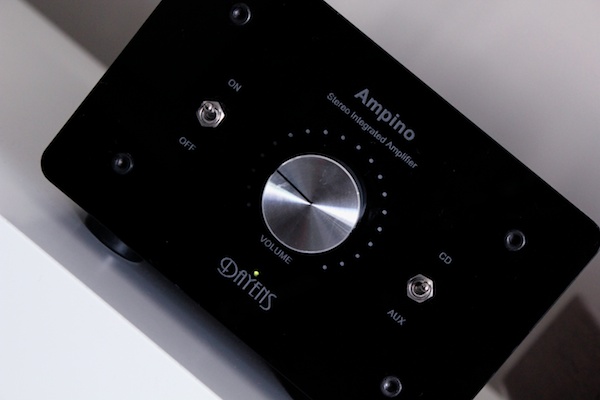 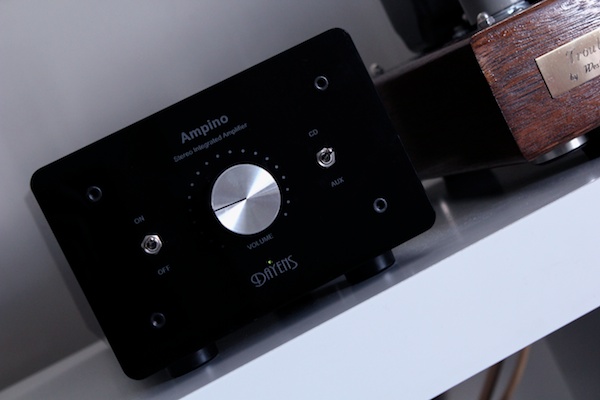 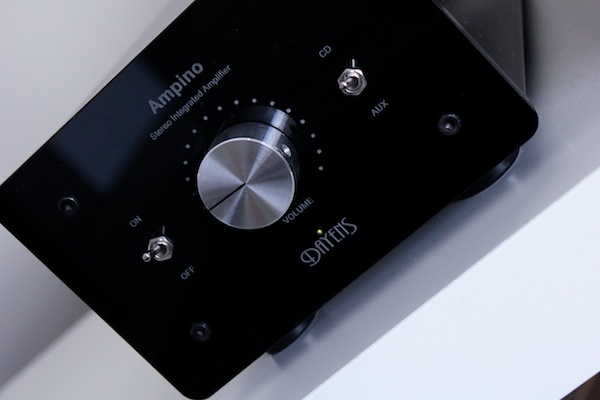 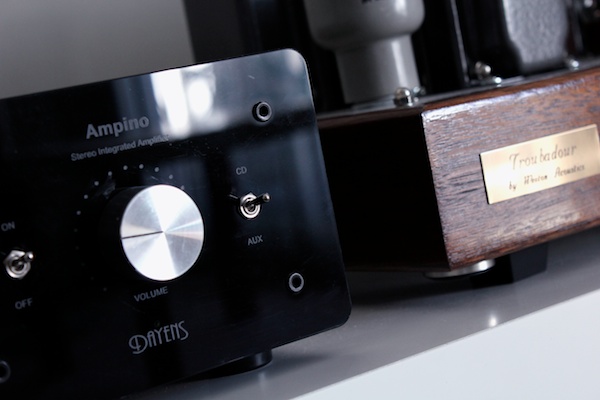 The Ampino’s Speedy Gonzalez transient attack once again shows this is an integrated that wants to (and should) be noticed.  It’s your younger brother striving to be taken more seriously.  It’s feisty and energetic.  On this score alone, there is much fun to be had.  And fun is often a rare commodity amongst a gathering of rarified audiophile folk.

More than that, the Ampino engenders its soundscapes a life force that would be harder to unearth in similarly-priced, bigger-brand boxes.  Bass extension – and its associated grip – is of an nimble disposition.

That the transformer is walled-off from the business end of the circuit means a pleasingly ink-black background in all but the lower treble (where a slight hint of glare was noted).  The very same brilliance that had me singing “Hosanna!” with the ATCs?  Affirmative. 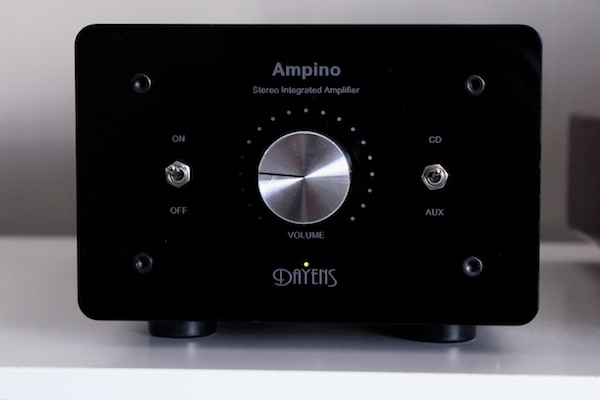 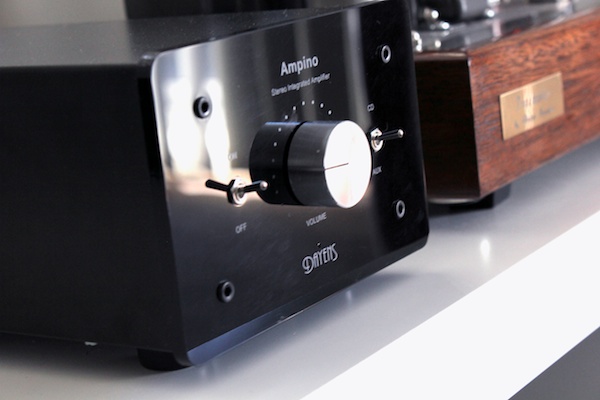 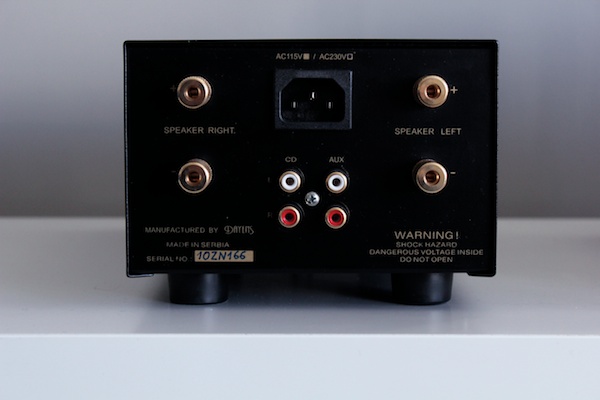 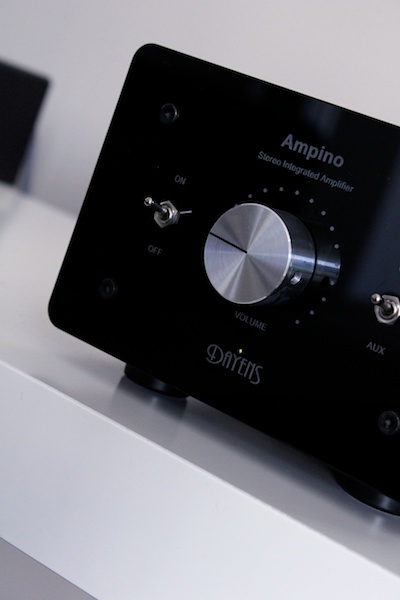 This presents the listener with a double-edged sword: an additional presence (not strictly “forward”) in the ~10-15Khz region that is tougher to endure during extended listening sessions with the Ampino hooked into full range 47Labs and – to a lesser extent – Hoyt Bedfords.  It isn’t immediately obvious.  Think of it as MSG infusion that’s near-invisible to the tongue but manifests itself in a more obvious way an hour or so later.

The minimalist approach to single driver loudspeakers means there’s just no hiding personality quirks in a crossover.  The piano samples that permeate Desolate’s artscapes can err towards an artificial ‘plinky’.  Only with the mini monitor Harbeths was this less noticeable.

For a coupla hundred more than the Ampino will set you back, Australians can step into Earle Weston’s hand-made tube amplifier world.  The Troubadour is a 6L6 integrated that will run you AU$999 and a good few months sitting on your hands whilst it’s made (there’s a queue, y’know). 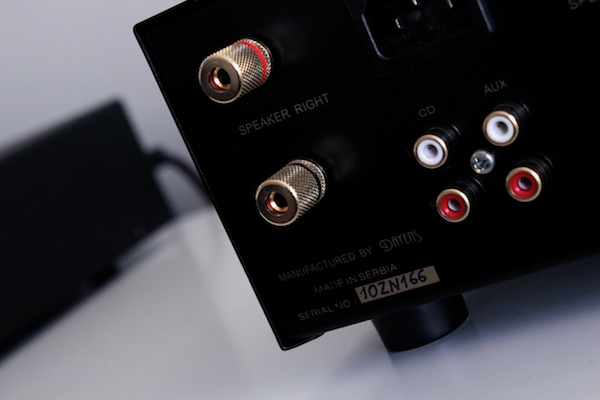 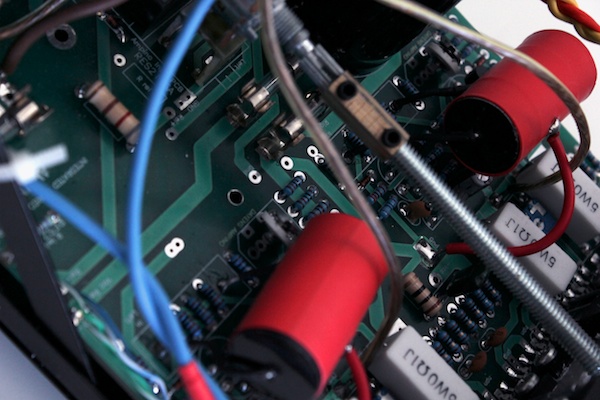 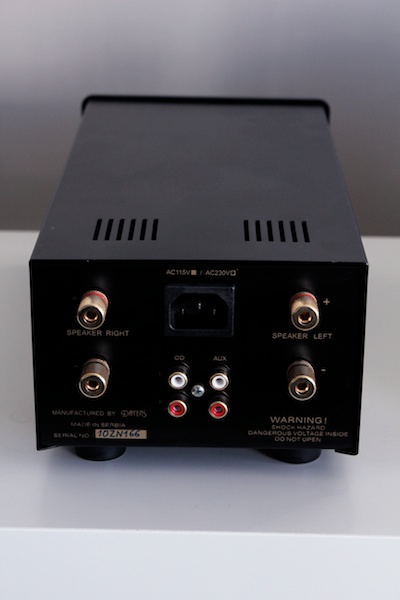 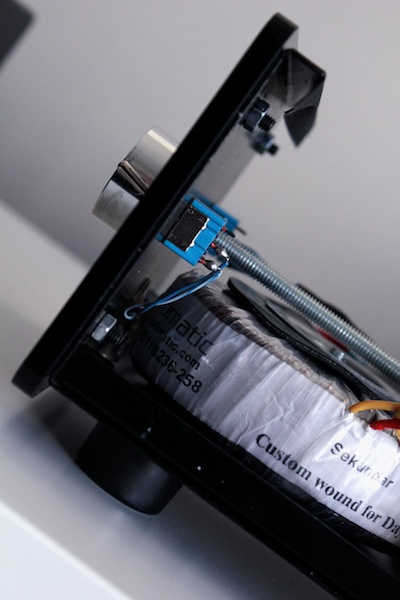 The Troubadour is the wiser, more stately gentleman.  The Ampino is more upfront and confident.  It’s the fast-talking wise-guy of Bogart movies.  The Troubadour takes more time with word choice and speaks more slowly.  It’s On The Waterfront Marlon Brando.  Both amplifiers are contenders:  the quad of 6L6 bring more meat to the bone (greater body) whilst the transistor-ised circuit brings more waif-like sparkle.  We don’t hear a solid stater trying to approximate the lushness of tubes – a trend that’s become somewhat overdone in today’s amplifier marketing spiel.  Yes, I like my equipment to have personality, but I want transparency first and foremost.  Anything that hitches a ride along the way is (usually) also welcome. 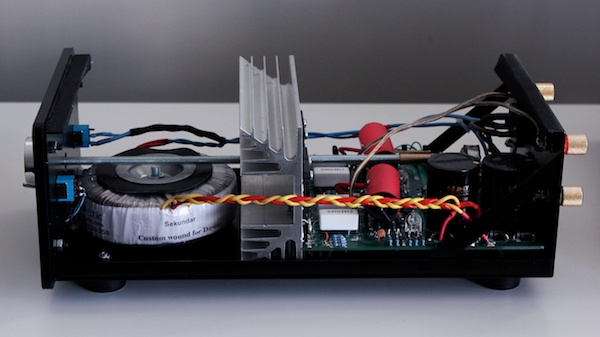 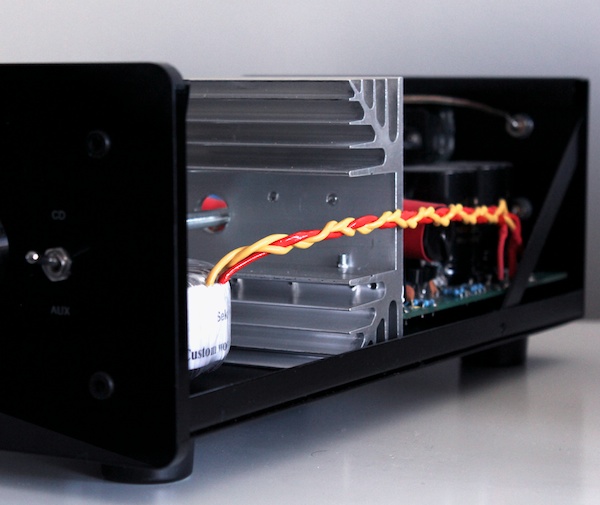 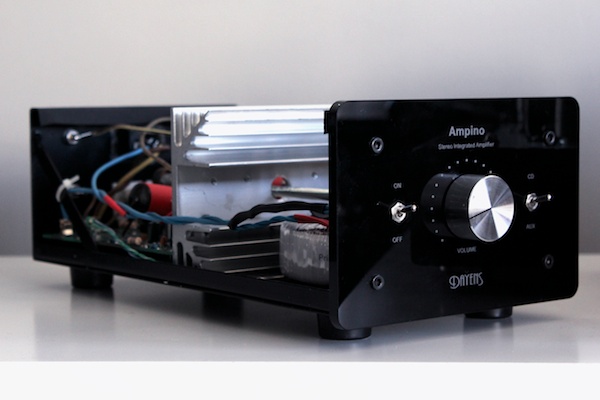 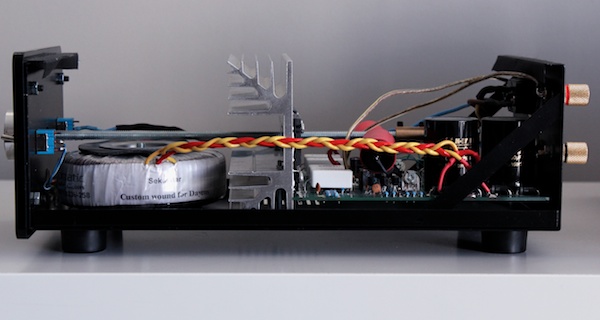 To this end, Dayens offer a fast and diaphanous little integrated in the Ampino.  One that exceeds expectation in many of the lesser-spoken traits: quality tone and timbre.  The level of aural seduction on offer here is rare at the sticker.  The hint of top end transistor glare will electrify more sombre sounding boxes, but also over-etch the sketch with brighter – or more revealing – loudspeakers.  System matching should be given a modicum of a priori consideration.  There are many who like their sound more crispy-fried at the edges.  On this second outing with the Dayens, I experienced best results in juicing the Harbeth P3ESR (and worst with the Usher S-520).  Nothing bested the aforementioned ATC/Dayens pairing.

With change from a grand, it provides a rock solid foundation from which to compile a budget system.  A beautiful-sounding budget system.Much like the EL-84-tubed Miniwatt N1 or Tripath-chipped Virtue ONE.2, it conjures images of dorm room audiophilia.  The Ampino makes a compelling case for converting young-‘uns to the hifi cause without upsetting the visual harmony of one’s living space or going all in with the credit card.  It’s also a box that’s easy to tuck away out of sight or plonk on a study/work desk.  Or it could slip unobtrusively into main rigs.  Anyone who’s been forced to treat new purchases as contraband will catch my drift here.  Refinement without the argument. 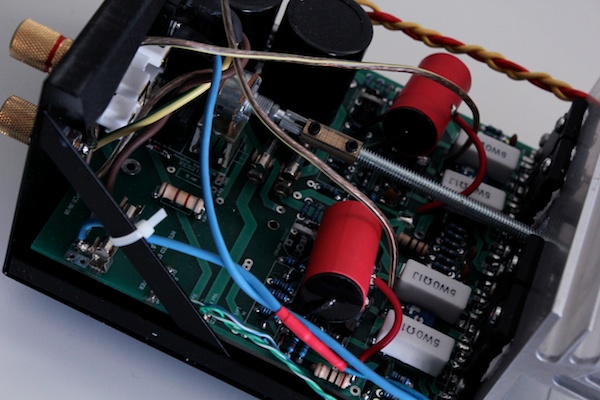 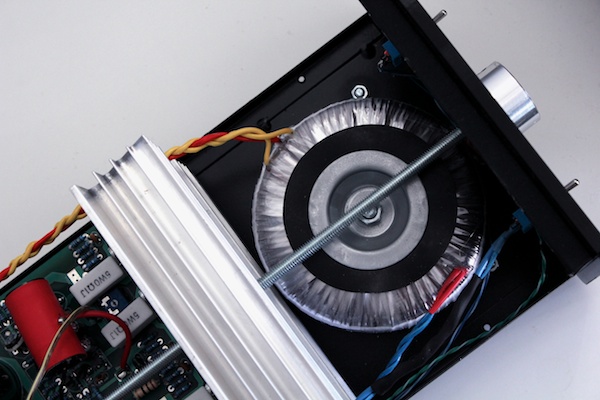 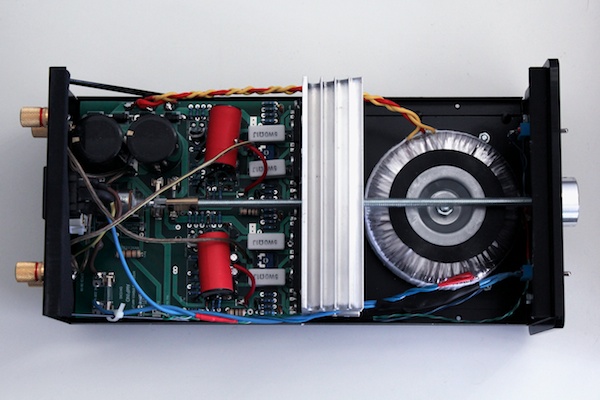 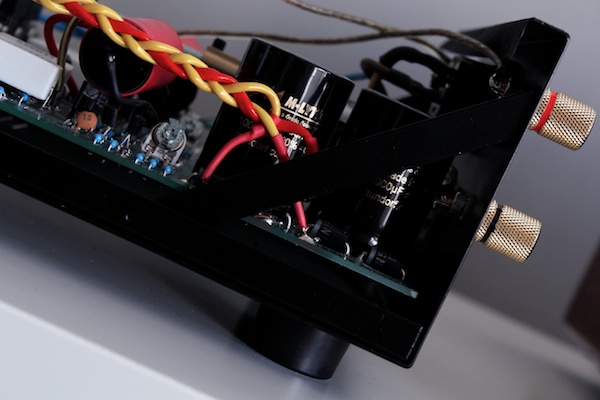 Let us not run away with ourselves.  Sobriety is more gentlemanly.  Only the punch-drunk will parade through the streets shouting about how David slew Goliath.  The Ampino is an extremely solid performer that does punch above its weight.  With loudspeaker matchmaking done right, it excels with speed and downright ebullience, providing a richer, fruitier alternative to the more established players in the budget integrated field.  Very, very good (but not life changing).

One thousand British pounds per pair. More info at

Rather than report on @innuos 2.0 with words and s

You don't *have* to own a Devialet to turn a volum

Who knew that a reformed @arabstrapband could make

I still find it incredible that YouTube allows me

There's a party in my mind. And that party never s

Still crazy after all these years. #can #halleluhw

Stand in the place where you live. @wilson.audio #