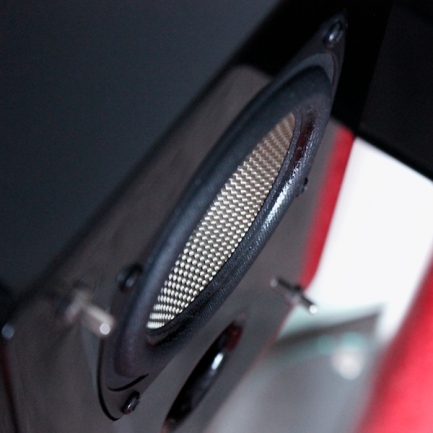 It’s easy to get lost in the hardware.  We chop and we change.  We mix and we match.  All in pursuit of a hopefully better, more satisfying sound.  And around and around it goes.  The ferris wheel of hifi purchases.  Yet we rarely ask ourselves: is what we have good enough?  This is the personal arms race of the contemporary audiophile, at war with himself and his machines.  Come on now, is it good enough yet?  Often, the answer is staring us in the face.  Often, the answer is a simple one.  Simple is best.  KISS – keep it simple, stoopid.47 Labs know about simplicity.  A recent visit to Jack Cheung of Audio 101 – the Australian distributor of 47 Labs gear – underscores this point.  At one end of the room, a multi-thousand dollar horn setup: a couple of subs, a pair of power amps, pre-amp and a turntable from outer space.  It sounds big, lifelike, utterly real – there’s a LOT of equipment and a LOT of sound. 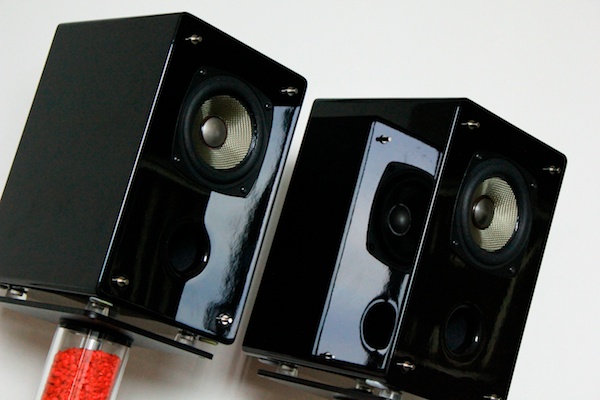 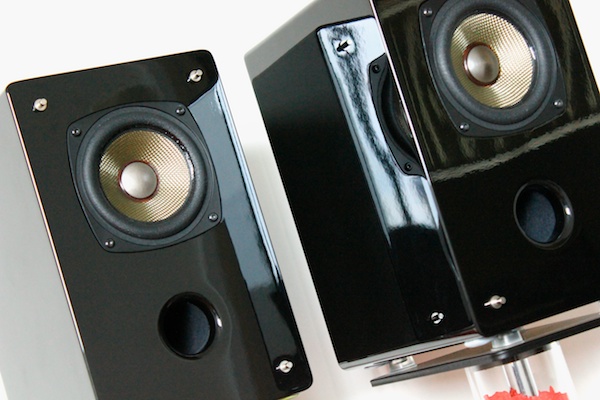 At the other end of Cheung’s room, the diminutive 47 Labs Shigaraki system: CD player, DAC, integrated amplifier and Lens standmounts (AU$2300).  It can’t compete in terms of scale, but the quality chasm isn’t as wide as you’d think.  The Shigaraki setup won’t do large orchestral with horn-like gusto but it will make a spirited attempt and is no less enjoyable in its downsizing of soundstage.  I’d already spent a good couple of weeks with Lens at home, so I was happy to hear the similarly exemplary essence of tonal purity at Audio 101.  Glen Gould’s grunting between his Goldberg Variation piano notes seemed to emanate from an adjoining room.  Nothing beyond the deeper bass notes felt absent.  Nothing sounded overdone.  The Shigaraki system made music sound so very fundamentally critical to one’s existence and yet so simple; akin to admiring the beauty of the Fibonacci sequence and its natural world connection.

47 Labs seek to strip away the layers, the nonsense, the puffery.  Kimura San – assuredly and predictably – believes in an elementary lucidity.  Less is more.  Zen and the art of hifi system maintenance.  This is the same mind that brought the wiped-windscreen clarity of the GainCard to the table.  No surprise also then that 47 Labs statement loudspeaker system is both a standmount and a single driver design.  The three inch driver unit contains seaweed, there’s a front port and some solid binding posts on the rear.  And that’s yr lot.  Did I mention the seaweed? 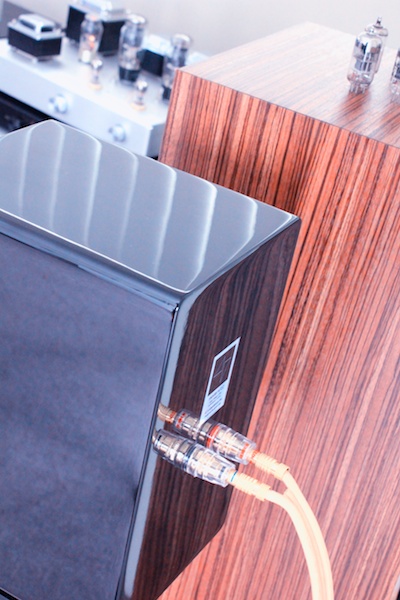 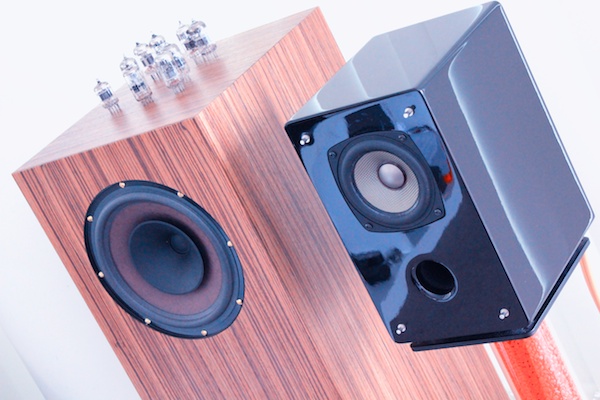 The embodiment of Unostentatious – possibly why the Lens play as beautifully at low volumes as they do cranked.  They’re never dull and yet never overbearing;  that’s not an easy see-saw to balance.  With some solid state amplifiers, I noted a hint of metallic sparkle.  With a hi-res version of Talking Heads’ swan song Naked, horn rasps dripped with wetness – “Mr Jones, put a wiggle in your stride!”.  There was lively elegance in the most upper frequencies.  And then there was the speed.

47 Labs’ standmounts counter the cliched view of the full-range loudspeaker owner as tree-hugging, single-ended-hugging, chick-with-guitar-worshipping men.  They aren’t as earthy as many rivals.  There’s none of that autumnal quality.  The JB4s are the sound of papyrus, Omegas more leafy.  47 Labs Lens sound nothing like either.  At first blush, their presentation is altogether more exciting, closer to a quality two-way but with a crack-of-the-whip speed that would leave most AU$2k two-way standmounts chewing dust: greater pronto than a ProAc Super Tablette, more chop-chop than a Spendor SA1, more expeditious – but less weighty – than ATC SCM 11s. 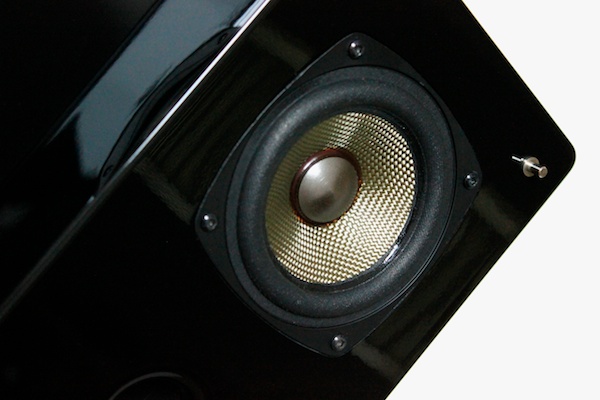 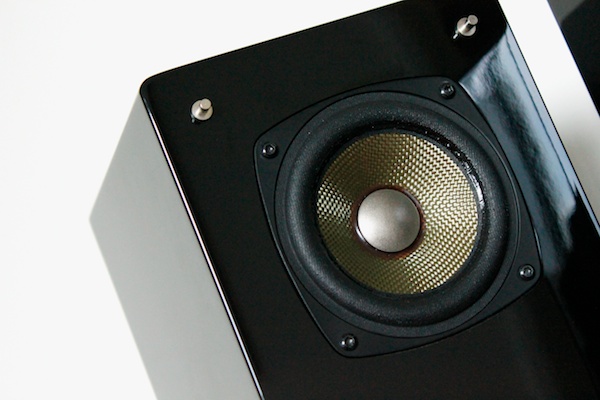 Louis Chochos’ bigger, cheaper Hoyt-Bedford Type 1 full-rangers (AU$995) have the superior imaging (by a whisker) and they reach deeper into the lower octaves.  47 Labs thrust music into the room, under your chin and all up in your grill.  The Hoyt-Bedford box drives 5 km/h slower.  Omega notes have more surface float.  The Lens are more the acrobat, and emphatically more the thrill-ride.  Hoyt Bedford plays American Alsation to the Lens’ Shikoku Inu.

Not Foghorn Leghorn but Pokemon, the Lens blow down the door on treble extension with tiny dynamite dynamics; but this is no backyard firework show.  This is a carefully planned and implemented spectacle with no safety barrier to keep the listener at bay.  From such small boxes comes jaw-dropping midrange clarity – almost a given with single drivers – as well as something on which some British manufacturers hold out on: fun.  Next to the Lens, Brit-standmounts might connote too much furrowed brow.  The Lens tumble and unravel music into the listening space.  There’s bounce and finesse in one mighty-tight bundle.  Spendor, ATC and ProAc triumvirate are for those looking for a serious-with-a-frown sound, with which it’s easy to become overburdened by the “which amplifier?” conundrum.  None of the Brits’ nominal sensitivity rating reach much beyond 86db – they demand power (and an abundance thereof) to attain their best.  Not so the Lens.  They blossom with a measly eight watts of single-ended triode amplification. 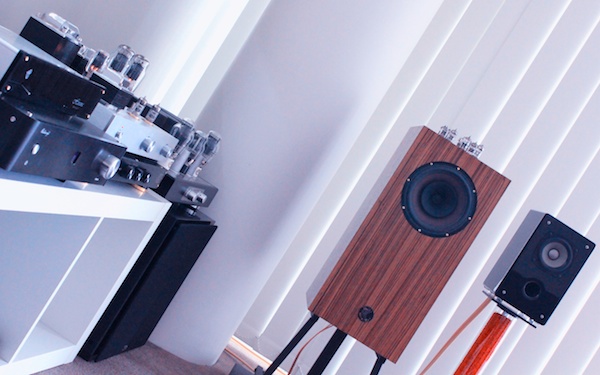 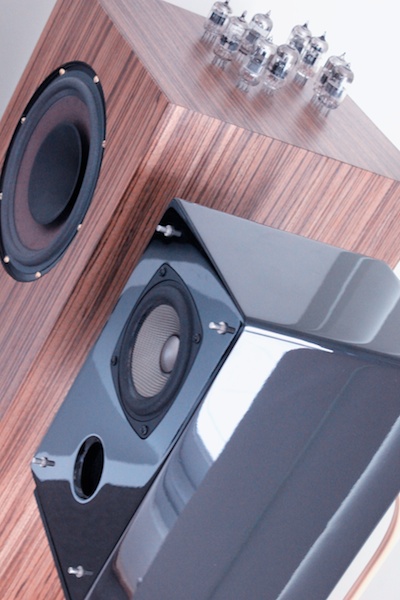 1999’s first GainCard has seen a thriving community of DIYers blossom in its wake, all attempting to ape (of better) the GainCard’s Year Zero simplicity and neatness.  An attack of the (Gain) clones!  One such cloner is Peter Daniel.  His AudioSector Patek integrated on loan to me for the Lens review period seemed too perfect: its delivery is fast and has that ice-melt glisten, but it errs towards a Special K dieting body with the Lens.  “Like a perfectly formed blade of grass”, mused my listening notes.

If you have a tonally sumptuous amplifier, the Lens will reward in spades.  If your amplifier is kinda ordinary, the Lens won’t punish you.  However, do not underestimate this loudspeakers eagerness to reward amplification improvements.  Apparently, Kimura San’s take on product integration, the 4733 headamp/DAC/pre-amp, can push 2.5 watts from its behind.  Hooked up to the Lens it broke no sweat and was easily the match of the AudioSector Gainclone; maybe even a little plumper in body. 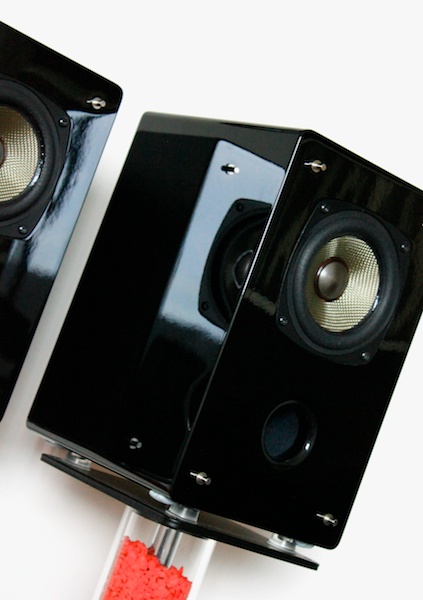 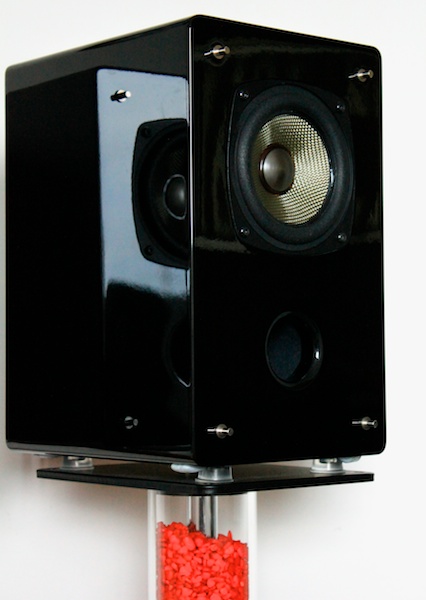 As one would expect, with ANY amplifier hooked into a small standmount, bass depth is limited.  Limited in a Linn Kan kind of way: every so often, they surprise.  A 24-bit version of David Bowie’s “Stay” sees George Murray’s bass notes as thick and round.  That could be the extra weight-gain from switching out the Gainclone for single-ended tubes, but 300B amplifiers aren’t necessarily famous for their bass punch.  But I hear what I hear:  the Thin White Duke ain’t quite so thin with the 300B.  The Audiosector Patek V2 is precise, detailed, to the point accurate and tonally beautiful. Black-as-midnight beautiful.  But also trimmer, leaner, fitter, happier, more productive.

There’s something quite perverse in playing Ulysses’s Acid Reflux EP – an acid techno stomp – on a 6L6 SET, via full rangers.  It shouldn’t work.  It nearly doesn’t. Pushing some Tung-Sol 6L6 glass into the McChanson SET and a fuller, more pregnant program emerges.  The deepest notes occasionally get ideas above their station (and soundstaging suffers).  A low-slung musical selection coupled to an amplifier that reaches deeper than before keeps me left of midnight on the dial.  Still, density and weight abound.  Satisfying it is.  I don’t get much air movement below the ~50Hz plimsole line but micro-dynamics and sheer speed make recompense.  Deep bass aside, the 47Labs boxes have enough forthright presence, in-room projection and transient dot-dash-dot-dot-dash to bring the illusory rave to the Darko lounge room – yes, they can play LOUD.  Someone pass me a glowstick. Bangin‘. 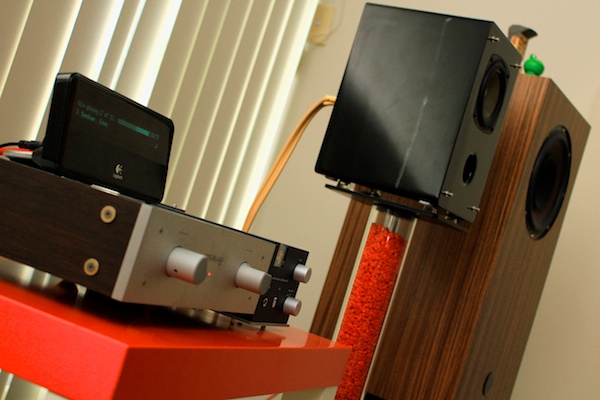 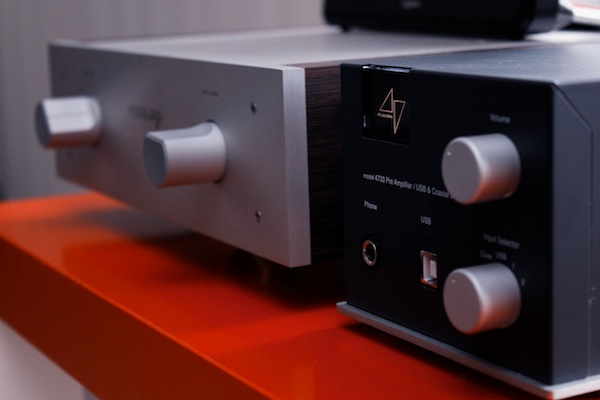 The House of Love’s second album usually sounds pretty darn terrible.  It’s a record that time has shown to be steam-cleaned, compressed and then ironed.  Turning up the wick usually emphasises its endless (dynamic) plateau.  It’s a drive across East Anglia.  To find the words “forward” and “enthusiastic” in my listening notes next to Guy Chadwick’s band’s broke new ground.  An album revitalised.  It’s tough to ignore ANY music through the Lens – they invigorate with crack-of-the-whip speed and precision.  Midrange clarity is (once again) beyond reproach.  Chadwick’s voice is full-bodied, rich and sorrowful – just as it should be.  The amplifier in use at the time?  The locally-made Weston Acoustics Troubador, with which music is a headier/heavier sauce.  To rediscover an old album in this manner is akin to bumping into an old friend to find he’s aged better than you’d previously expected – a heartening experience.

To refer to these boxes as a blinged-up John Blue JB3 would be trite.  They are no way near as obstreperous as the JB3 in amplifier pairing and they cope better with complex music as well as delivering a more extended top-end.  They are considerably more detailed.  The Lens are more efficient – an easier drive for that go-get-’em sonic signature.  This excitement and forwardness brings them out of bedroom reclusivity and into showier lounge setups: full rangers that require no excusing, no explanation, no justification.  Grilles-on would fool the uninitiated into betting they were listening to a two-way. 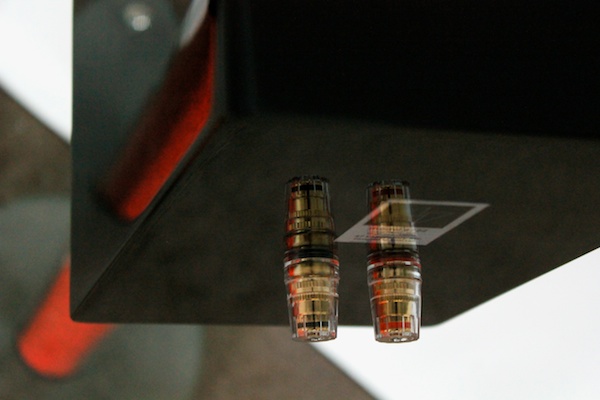 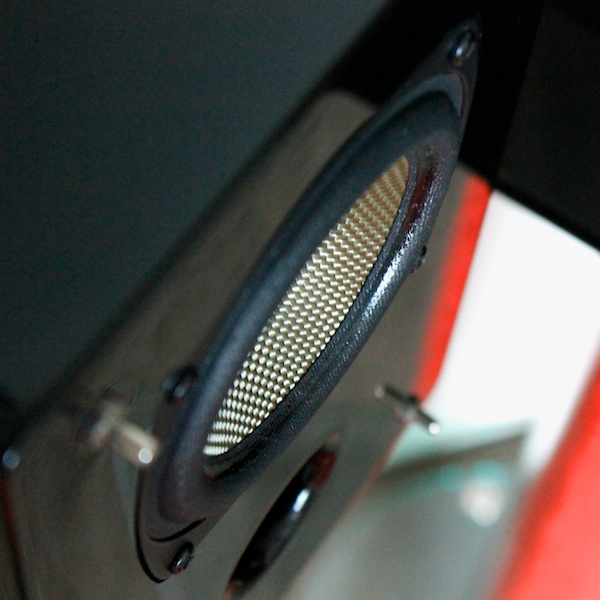 47 Labs’ pursuit of purity gives us boxes that transcend the term “hi-fi”.  You don’t hear the Lens, you hear only the music they make.  By compromising lower bass delivery, Kimura San brings you a truly engaging experience: fast, lucid and present.  Like the best loudspeakers, the Lens are beguilingly transparent and true to source.  Ladies and gentlemen we are floating in space: a midrange that’s sufficiently forward, there to fill an average city dweller’s life with purity of melody, of rhythmic punch, of cymbal shimmer – think glitterball sparkle – but little excess(ive) bass energy to trouble room nodes of more modest living spaces.  Their Japanese genesis is impossible to dodge.The Lens’ exhilaration in painting expansively (breadth and depth) and its wall-of-sound imaging keeps a SET’s misty-eyed romance at bay; single-driver loudspeakers for the modern living spaces and for modern music.  They don’t so much drive the room as fill to the brim with music that’s zippy and tonally right on the money.  Lean of weight but, yes, but 100% wheat and 0% chaff;  their simplicity makes them good enough but their sonic excitement and beauty takes them far beyond even that.  47 Labs’ Lens easily surpass being “good enough”. They are possibly one of the finest standmount loudspeakers for smaller living spaces – where quality doesn’t necessarily nudge quantity out of the picture. 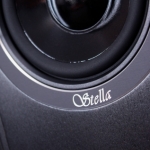