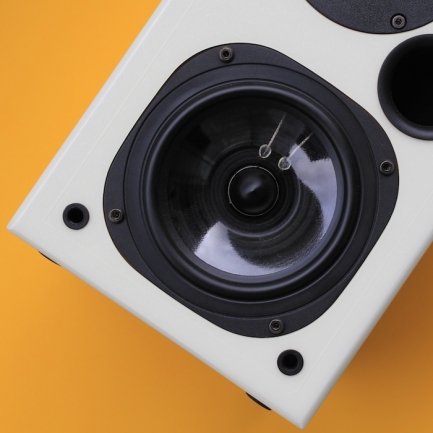 This review could easily have been subtitled “How I Nearly Got It Wrong” or “Reasons To Be Patient (Parts 7-12)”. Five years on from its original release, the Usher S-520 is obviously not a new product but gets the review treatment here because it has taken well over six months for me to become accustomed to what the S-520 can (and can’t) do. Some reviews are just like that. The review gestation period can last for months, particularly when the product at hand is a fussy and demanding house guest! The Usher S-520 and I have been on quite the journey together because they didn’t get along with everything – instead, they highlighted the (often stark) differences between amplifiers.

Usher Audio is based in Taiwan, but for the S-520 they’ve drawn on some critical design assistance from US-based speaker designer Dr. Joseph D’Appolito (he of the famous configuration). The transparent polypropylene 5″ mid-bass driver recalls the ProAc 1SC, but the Hong Kong-made 1SC clones even more so. The tweeter is a 1″ silk dome. Caged, it will appeal to those who share their living space with tiny, inquisitive fingers. The S-520 are front ported. 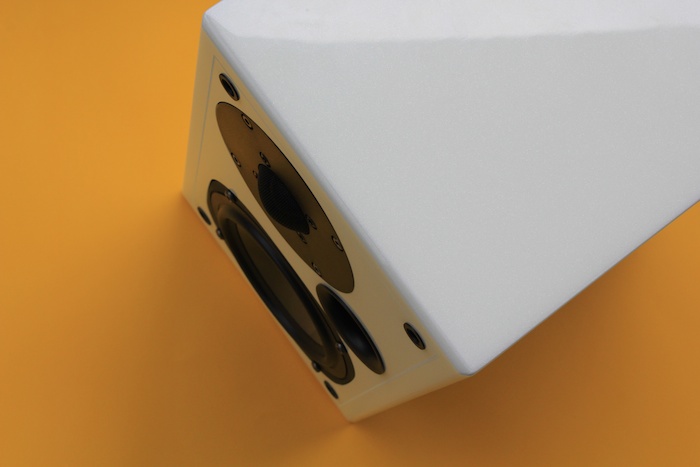 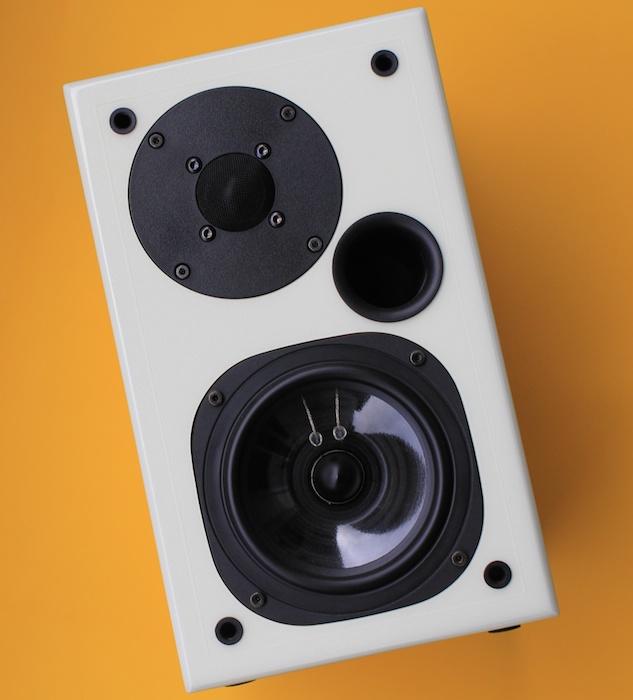 Build quality is nothing short of astonishing, the pearl white gloss finish immaculate. Ditto the black. For those hauled up on a diet of Ikea and Athena, the similarly gloss finishes of red, yellow and black are available for a few bucks more than the standard cherry; the spouse approval factor runs high. For the same money in Wharfedale World, we still get vinyl wrap. If weight is a measure of quality, the Ushers are positively luxurious. Their heaviness points towards the cabinets being relatively inert due to stringent bracing techniques.

Initial listening sessions with Fever Ray’s eponymous debut were mixed. Using an Aaron XX integrated amplifier, side-by-side comparisons with a pair of Wharfedale Diamond 9.1 (also front ported) gave the clear advantage to the British boxes. The Wharfedales were undoubtedly smoother and had the superior vocal enunciation. The S-520s sounded comparatively thin and shouty, particularly at higher SPLs. My listening notes read, “a tiny woman screaming from inside a large box”. Mind you, the 9.1’s mid-bass hump was mildly irritating – I find it wholly unnecessary to have my brain tricked into believing the illusion of more bass. Thankfully, Usher’s design team is above such shenanigans. Most standmount loudspeakers don’t often do (deep) bass and I’m fine with that. 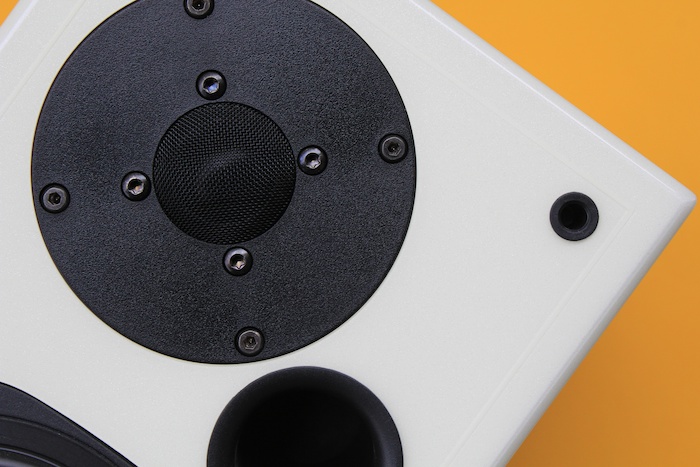 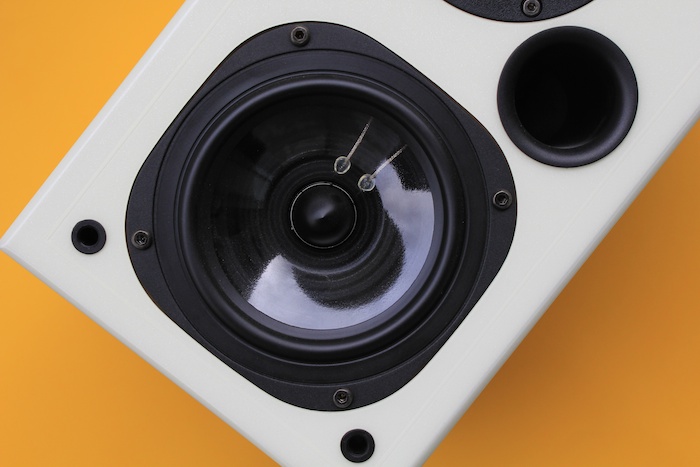 Playing matchmaker between amplifier and loudspeakers can often be likened to running a hifi dating agency. Each noise maker or power box has its own personality, its own foibles and quirks as well as its own demands on who it would select as a mate. You call it synergy, I call it an introductory service.

Everything that I’d read (and heard thus far) suggested that the Ushers would enjoy an amplifier with a greater sense of refinement. The Virtue Sensation M901 had proved time and again that it knows how to make polite and witty conversation. Yet the Ushers found it too aloof. “He’s very smart but a bit bland…too geeky for us”, they complained. Sure enough, this partnering lacked vitality. It was detailed without being too dry, but bass lacked definition. It was un-involving, slow and the overall presentation lacked heft. Dynamics came up short. 86db sensitivity is not outrageous, but I sensed the requisite additional beef was only really gonna be had from the Sensations’s JT Linear PSU upgrade (which I didn’t have to hand). 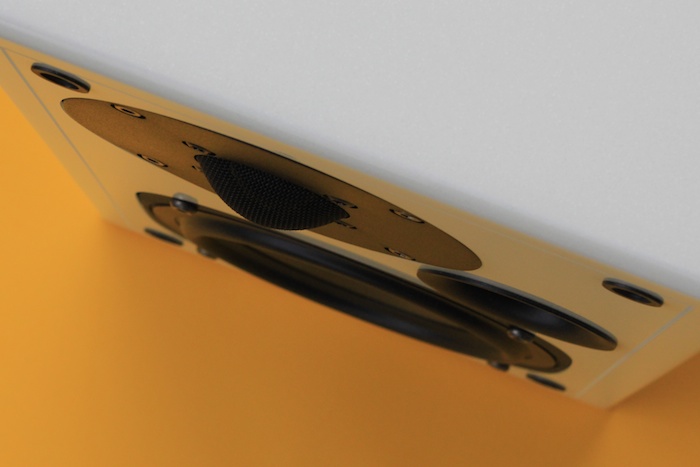 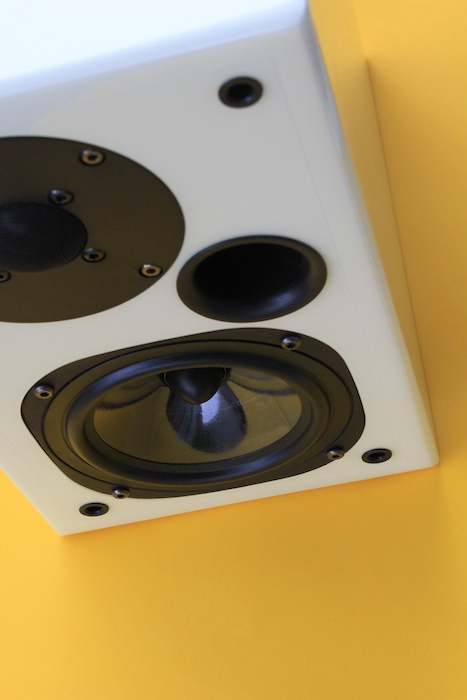 Perhaps the enthusiastic tweeter called for a different approach? How about some tubes? Out came the Audio Space EL34 integrated from the cupboard. This smoothed things a little – and hauled midrange ass – but bass control was all too vague. A romantic sound at lower volumes was sufficiently pleasing, but come time to crank the party, the pairing screamed for separation. Smooth talking didn’t go down too well with the Ushers. 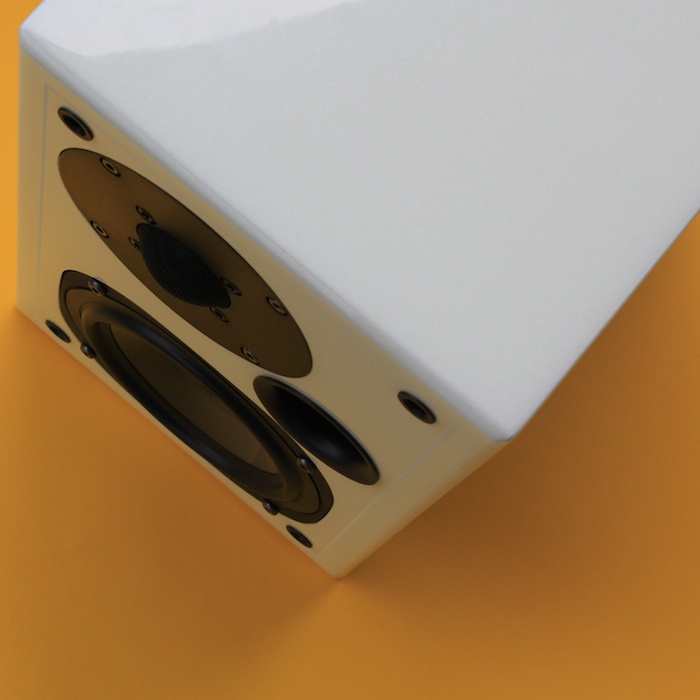 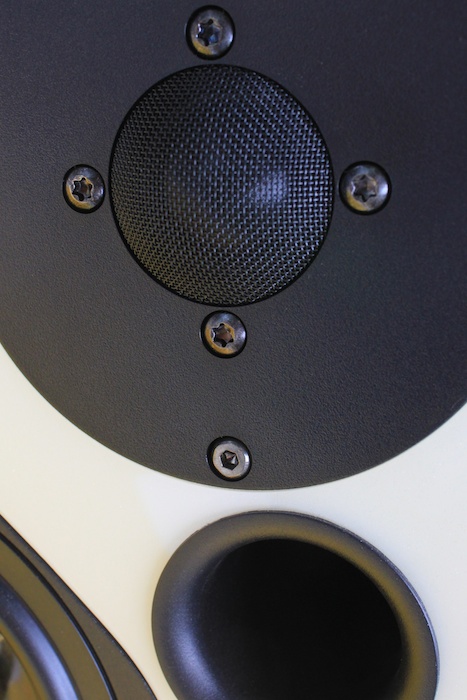 I occasionally dusted them off for the briefest of introductions to other amplifiers. They enjoyed the short-term courtship of the JLTi EL34 power amplifier. It confirmed that braun was a pre-requisite for romance to blossom. The Ushers ditched the JLTi for the NAKSA 70, only for the the top-end to sound too shrill with searing guitar solos. As audio parent, I strongly disapproved of this alliance (which ultimately proved to be fleeting). 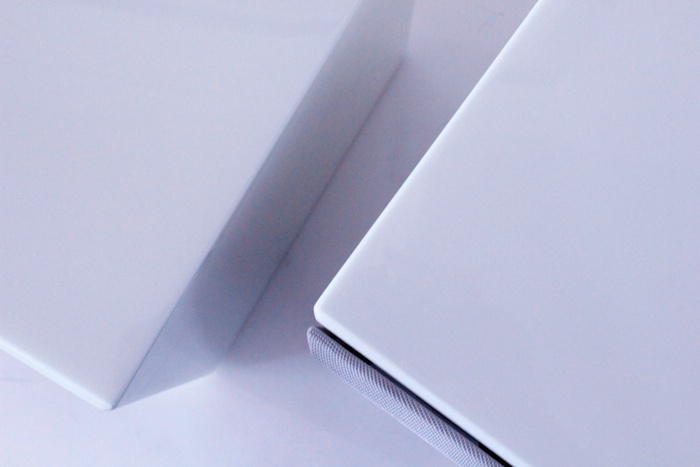 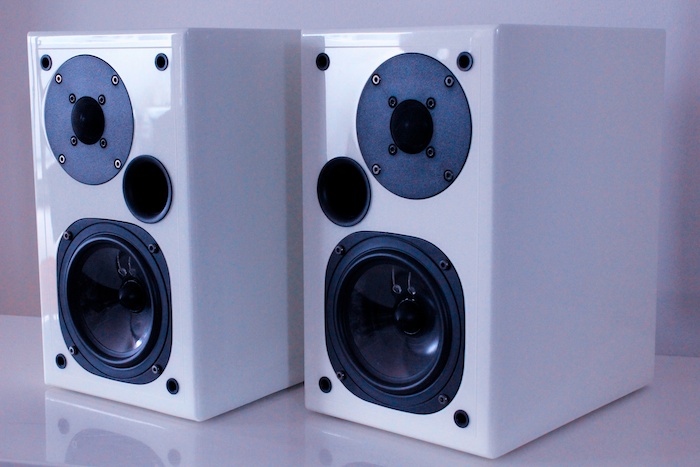 Back into the cupboard they went.

Then came the REDGUM Sonofa’GUM 5500 intergrated – a locally-modified Chinese amplifier that knows the meaning of the words “high current”. Perhaps it was those same two little words that turned the whole game around? The AU$600 REDGUM took the Ushers by the arm and refused to let go, pushing them this way and that way. Loudspeakers that liked to be told. It was all there from the first click of play of Matthew Sweet’s Altered Beast– guitar squall without the squeal, an insistent rhythm section that kept it all tight and together. Love was in the air. 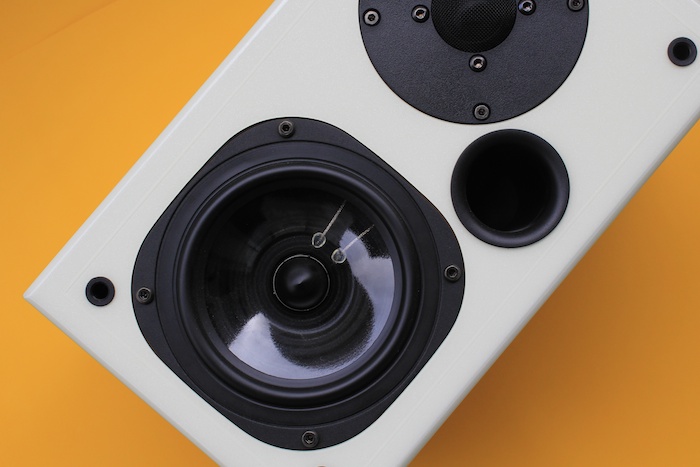 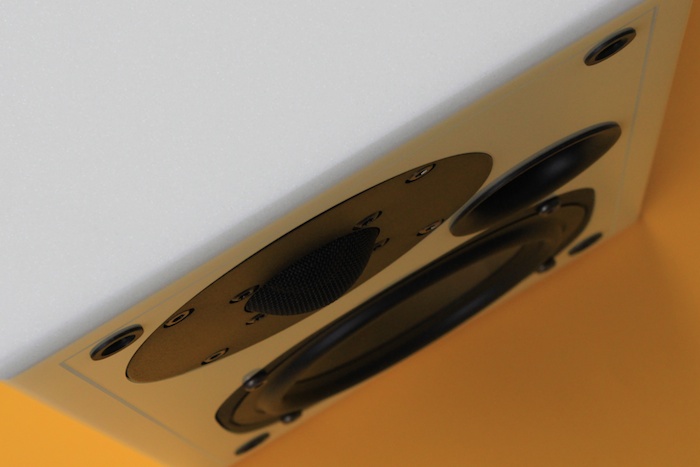 The REDGUM’s superior conviction brought greater sonic density. More importantly, lower frequencies were ruled in a manner that would make Joseph Stalin look liberal. Bass notes were tighter, firmer. They swung low with considerable payload, which in turn anchored Redshape’s tech-noir to the floor. One couldn’t expect a “better” bass response from ANY standmount in the sub-$2k categroy, let alone one that goes out the door for around five hundred smackers. The baby Usher’s overall excitement makes it easier to ignore their diminished midrange clarity. They’re no ProAc – they don’t image as well as the 1SC, nor do they have that midrange – but they don’t come with the 1SC price tag. Imaging from the S-520 is good, but not spooky good.

With the Sonofa’GUM running the household, the Ushers showed that they were more than capable of driving larger rooms with aplomb. The “high impact” sound promised by the brochure was finally attained. There was no evidence of a mid-bass hump and they sounded positively electrified with contemporary rock and pop music. LCD Soundystem’s “Dance Yrself Clean” starts with James Murphy’s mild-mannered vocal intonations over a simple tom pattern…until that synth kicks in at the two minute mark. And when it kicks, it does so like a mule. I enjoyed a true “Maxell moment”. 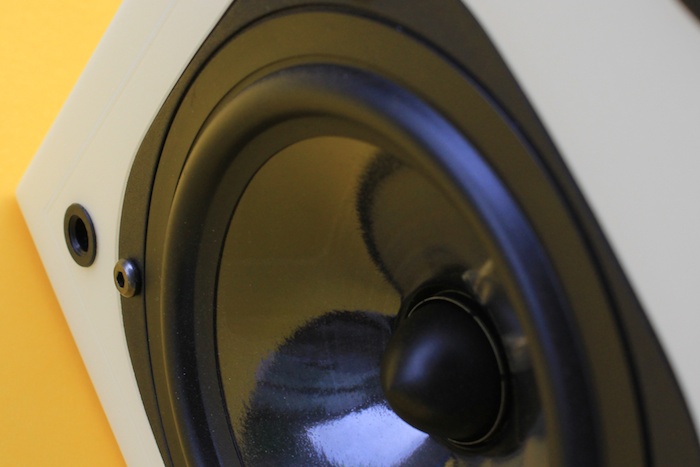 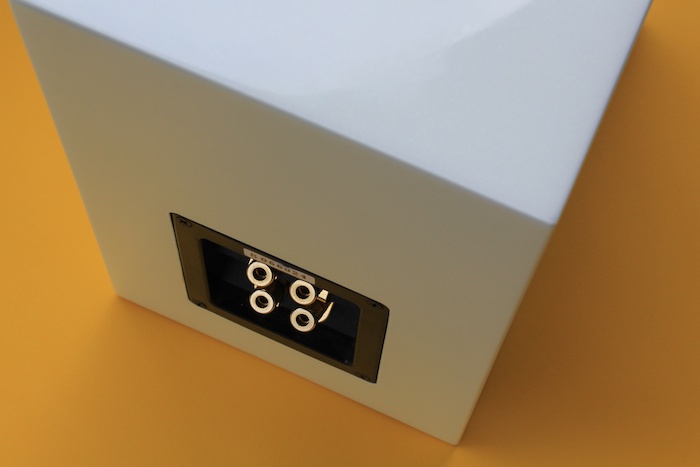 At the opposite end of the frequency range, the top end remained insistent but had shed some weight for a smoother tss-tss-tss of electronic hi-hats. The more organic cymbal crash of Neil Young’s Crazy Horse also (bizarrely) proved to be the defining force behind the open-road momentum of Ragged Glory‘s “White Line”. There was little to complain about in terms of soundstaging. My expectations for a budget standmount usually start fairly low, but the Usher’s handling of aural depth was especially good. With such an abundance of soundstage depth the S-520s could be positioned closer to the rear wall than the Wharfedale Diamond 9.1s. Doing so with the latter over-accentuates the already prominent mid-bass. No such issues existed with the S-520. 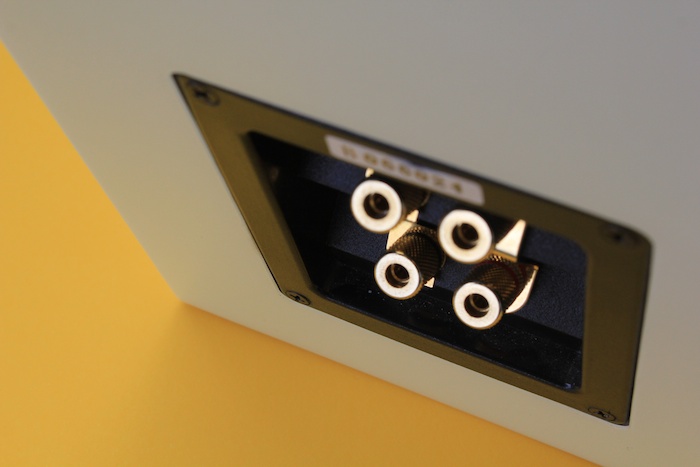 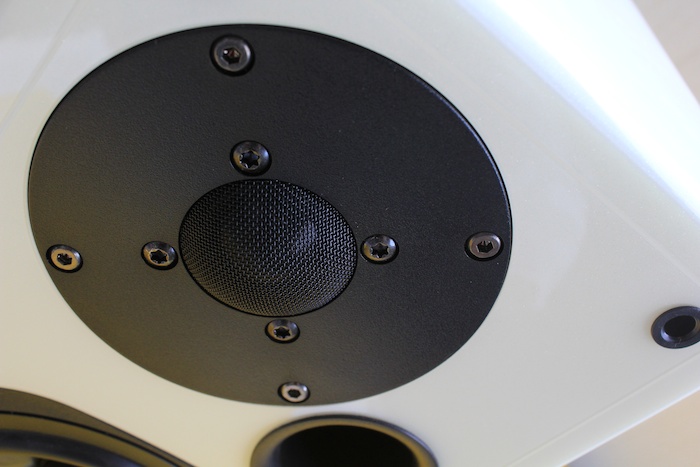 The entry-level standmounts from Taiwanese Usher offer a highly resolving and dynamic sound. That they land at one’s feet for such little cash means the buyer can enjoy a rare opportunity to tip the spend scales in favour of a relatively more expensive – and hopefully more powerful – amplifier. With plenty of high-current grunt behind them, the Usher S-520 will reward the listener with an engaging presentation that has few peers in this price bracket. You bring the braun and it’ll bring the brains. Those that demand clean, in-your-face excitement from their loudspeakers could easily end their loudspeaker search right here and now. That they look stunning is but the icing on the proverbial cake.

Feed them the right amplification diet and few competitors in the budget category will get close to the performance of these entry-level Ushers. 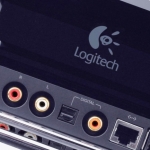 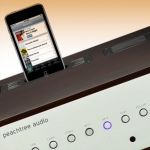