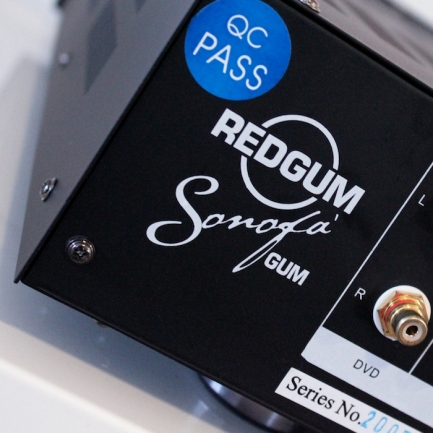 Budget systems hunters – we’re all about obtaining an enjoyable sound for little money.  An integrated amplifier and some half-decent standmount loudspeakers would see most people on the road to audiophile bliss without a big spend at the high end; but standmount speakers are deceptive little beasts, often requiring some serious juice to get them to play nice.  A $400 integrated ain’t necessarily gonna do justice to $400 standmounts.  The amplifier will invariably come up short and leave the listener unsatisfied.

My formative hifi years saw the budget integrated amplifier world begin and end with Rotel, NAD and Cambridge Audio.  I loved the RA-04 integrated so much that I stepped up to the pre-power combo of the RB-03 and RC-03.  Several years later I was messing around with the configuration of a second system and found it much tougher to dodge the you-get-what-you-pay-for bullet.  The NAD315BEE was punchy, but a touch bland and the Cambridge 340ASE was all head and no heart.  I needed an amplifier that could exert some discipline over a pair of ProAc 1SC Clones, but one that wouldn’t reign blows down on my bank balance. 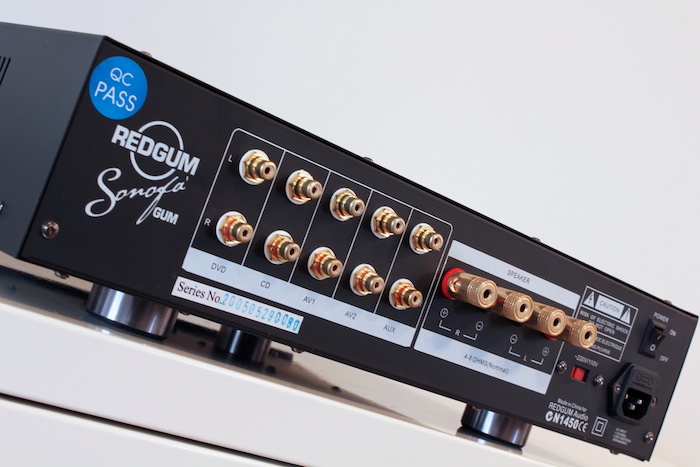 The constant amongst this integrated amplifier switcheroo was a REDGUM RGi35 that sat in my primary system.  I loved its unusual styling – the wooden fascia and the on/off key switch – and I dug its sense of poise and timing.  On the one hand it was dynamic and energetic, on the other it was understated and conservative – the best of both worlds.  Most critically, it was no tin man: it had heart.  The REDGUM sound is a unique one and – until recently – was priced outside the budget amplifier bullring in which Rotel/NAD/Cambridge continue to slog it out.

Then came the DAC lust.  The RGi35 was replaced by a Peachtree Nova (AU$1499); a game changer in terms of system integration and DAC detail retrieval, but the amplification at the heart of the Nova was a bloodless affair.  It had none of the drive of the REDGUM. None of its presence or immediacy.  Signalpath sneakily rated the Nova’s 80wpc into 6 Ohms and it felt like far less – unable to properly drive the ProAc 1SC Clones.  The RGi35 was rated at 35wpc into 8 Ohms and sounded like considerably more.  A rude lesson in not relying on the specifications sheet.

The economic necessity of modern times has seen REDGUM become more pragmatic about its “Made In Australia” philosophy.  Lindy Gerber of REDGUM explained that the Sonofa’GUM 5500 (AU$695) came to be with “the need of a price point under $1000 for the U.S. market when the cost of the RGi35 had just tipped over that …”.  The need to satisfy those customers who must have that REDGUM sound, but from a smaller budget.  Fair enough. 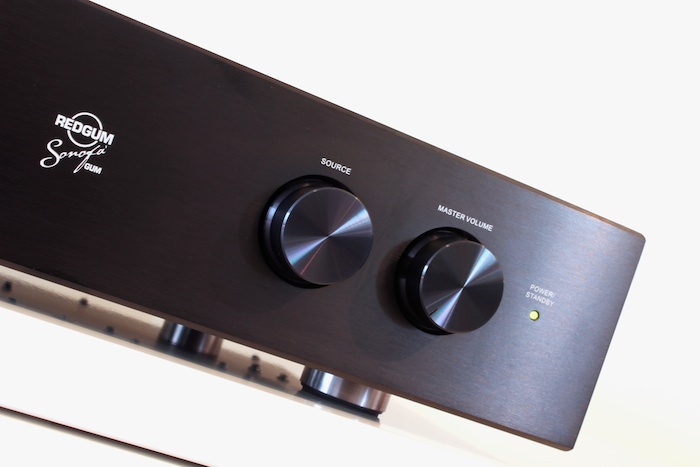 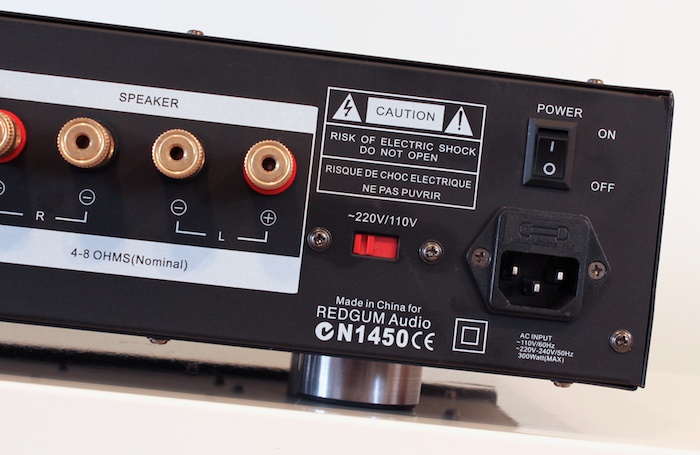 Let’s smash some myths: The Sonfoa’GUM 5500 is not an RGi60 in a Chinese case.  But neither is it a simple rebadge.  The Sonofa’GUM 5500 is Asian designed and manufactured and then subtly modified by the guys at REDGUM when it reaches home turf.  Lindy explains it best: “The hunt for the final choice of amplifier was a long process – almost 2 years, in fact, till we felt convinced that it really performed up to our requirements, and especially after our modifications here in Australia. For starters, to find a manufacturer of a “mass-produced” (aka conventional design) amplifier with a passive preamp was not straightforward.  The aim was then to remove some of the “Asian fuzz” found in the stock-standard version.” REDGUM also have a representative on the ground in China overseeing the amplifier’s manufacturer and quality control.

When cross-referenced against the REDGUM amplifier range proper, the Sonofa’GUM 5500 sports a 180VA toroidal transformer (similar to that of the RGi120).  “The SG-5500 is rated at 55WRMS into 8 ohms, it is chunkier than the RGi35 (35+35WRMS) but it could be described as not being as poised as the RGi35 due to the SG-5500 using a conventional power supply. (In the REDGUM range, its own UltraFlex power supply is certainly not a conventional design and so the greater Transient Power available uncovers the musical magic so often left hidden on a disc by other designs.)”, Gerber added. 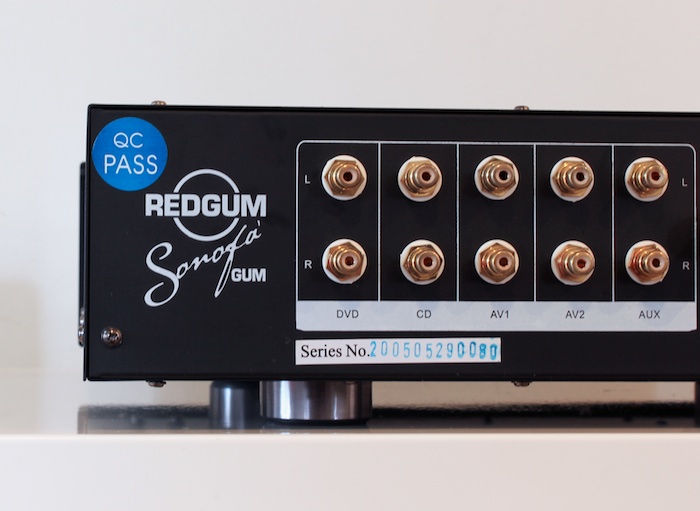 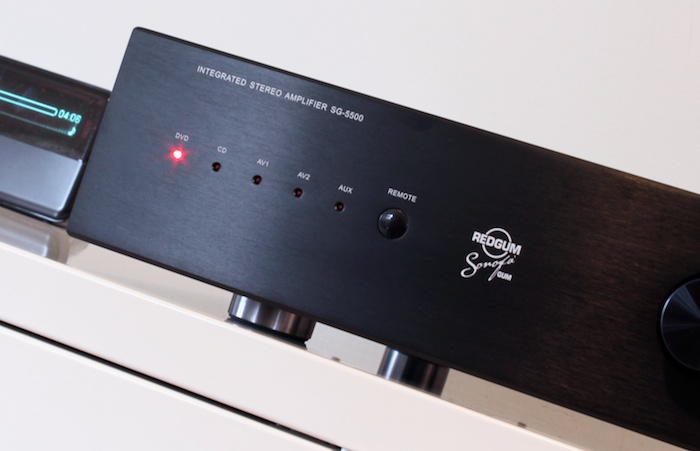 The casework is re-assuringly sturdy, the front panel re-assuringly functional.  The power and source selection LEDs are of a relaxed disposition.  There are five line-level inputs and – wait for it – a remote control.  One of the biggest niggles of owning the RGi35 was the manual, dual volume pots.  I can’t begin to describe the audiophile anxiety in matching left and right channel volume levels – with the Sonofa’GUM, the high-wire balancing act is out of the user’s hands (phew).  The remote control is cheap-looking, but has a fair amount of ergonomic consideration behind it: one doesn’t have to actually look at the remote to attenuate volume.

Having spent recent months with a SET/single-driver pairing, the Sonofa’GUM 5500 was a shock to the system.  It sounded quite horrific with the JohnBlue JB4 – not a good start.  I dusted off pairs of Wharfedale Diamond 9.1 and Usher S-520.  These speakers keep me honest – they are a reminder of how high the budget loudspeaker benchmark can be pegged.  With the Sonofa’GUM 5500 on amplifcation duties, I was also reminded of how much audiophile joy can be extracted from a budget two-way.  With the Ushers as sparring partners, I went on week-long rollercoaster thrill ride that never lacked safety or control.  This was a amplifier/speaker combo that could drive large rooms with ease (and one I could easily live with day-to-day).  More critically, this was the first time an amplifier had taken the S-520s by their kahunas (and refused to let go).  The Sonofa’GUM’s control is arresting. 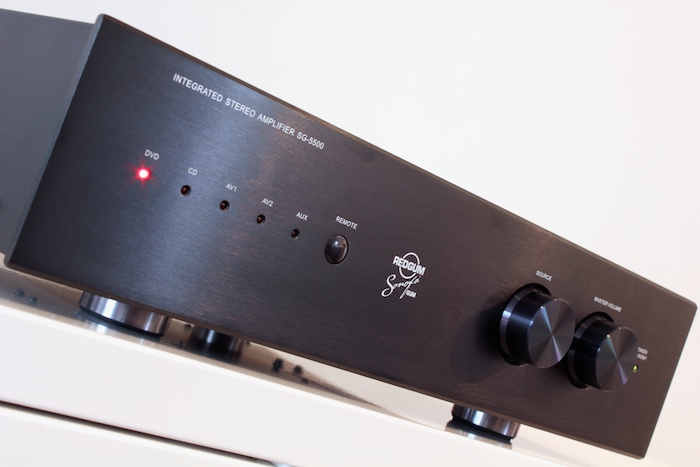 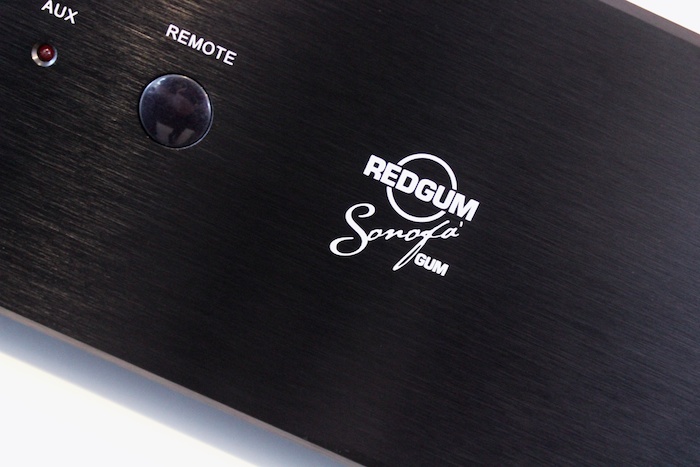 Amorphous Androgynous’ sitar-tinged reworking of Paul Weller was bold and brassy – most notable was the taut and generous bottom end.  Did I mention taut?  Matthew Sweet’s Altered Beast proved to be similarly thrilling, the guitar squall of Robert Quine given free reign to roam the room.  Then onto The Waterboys’ Room To Roam – an extremely poorly recording rendered palatable.

This is an amplifier that doesn’t want for drive – the engine room within the black case slaves every single one of the fifty-five watts per side.  Tom Waits says it best: “Heave away, boys, heave away”.  As such, it’s tremendous for rock and – most emphatically – electronic dance music.  Neil Young’s Ragged Glory was a total blast; the Crazy Horse rhythm section hung like low cloud, pinning me to my seat for over an hour.  You won’t look to this amplifier for the ultimate in tonal richness or for its ability to declag massed strings.  You’ll probably want tubes if that’s your bag.  Or a “proper” REDGUM amplifier.   The Pixies’ loud-quiet-loud modus operandi nudges the ball into the hands of the Sonofa’GUM’s strong suit: macro dyanmic shifts.  You look to this amplifier to start a fire.  Fans of air guitar will find themselves in hog heaven. 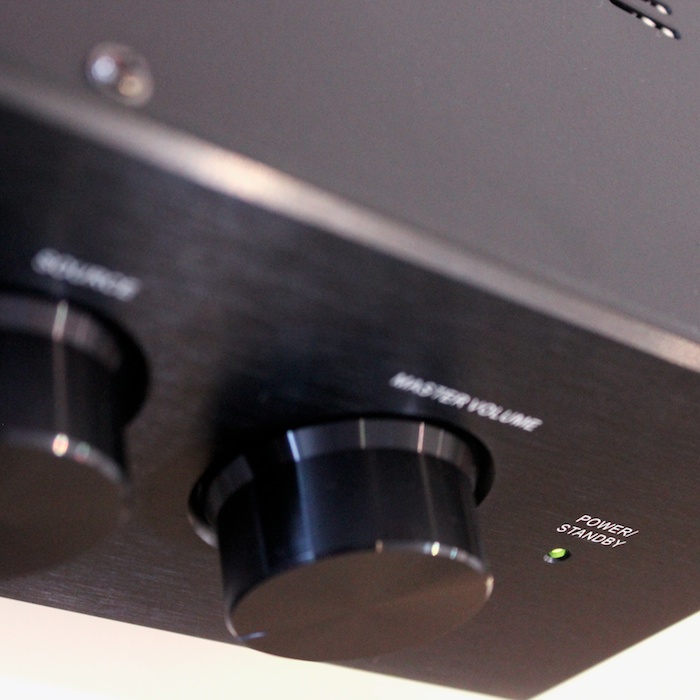 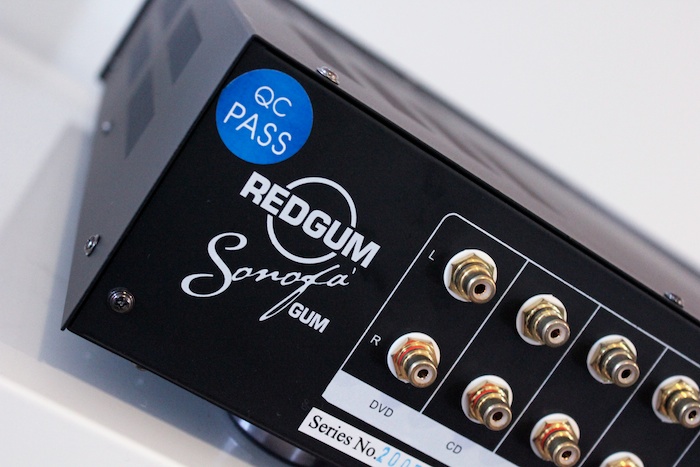 The sheer weight and slam emanating from those baby Ushers during an afternoon’s tech-house-a-thon finally saw me perform a three-sixty on my opinion of the loudspeakers that I’d previously dismissed as lacking dynamics and overly-bright.  The propulsive throb of Fabric mixes from John Digweed and Luke Slater was exquisite and exciting.  The Ushers had found a solid mating partner in the Sonofa’GUM 5500.  Electronic music gained heft and a hint of refinement.  Bass was as tight as I’d heard from a pair of ATC SCM 11s, but the top end wasn’t as closed in.  The Usher’s skylight opened up to brilliant sunshine – bright, but oh-so-pleasant.

Those looking for an amplifier that does justice to the refinement of classical pieces might find that the REDGUM doesn’t cut the necessary harmonic mustard.  A quick spin of The Essential Michael Nyman Band exposed the Sonofa’GUM’s one (very minor) weakness:  strings come with a hint of steel, often leaning towards tonal rigidity.  I’ll confess to being unfairly picky here, especially in the context of this amplifier’s price.  Soundstage coherence of this calibre is hard to find, let alone at seven hundred clams.  Such musicality and expressive articulation kept all but the aforementioned nugget of tonal criticism out of arm’s reach. Don’t mistake this microdynamic shortcoming for a lack of detail and/or instrumental separation.  Detail without dryness and a powerful maturity that’s engaging – it’s all here. 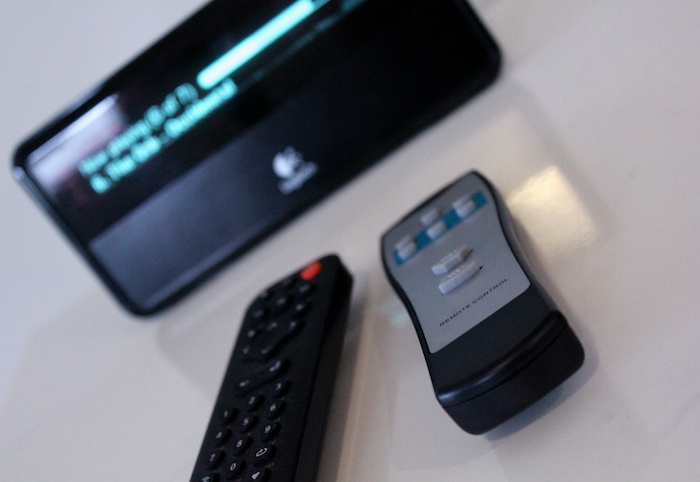 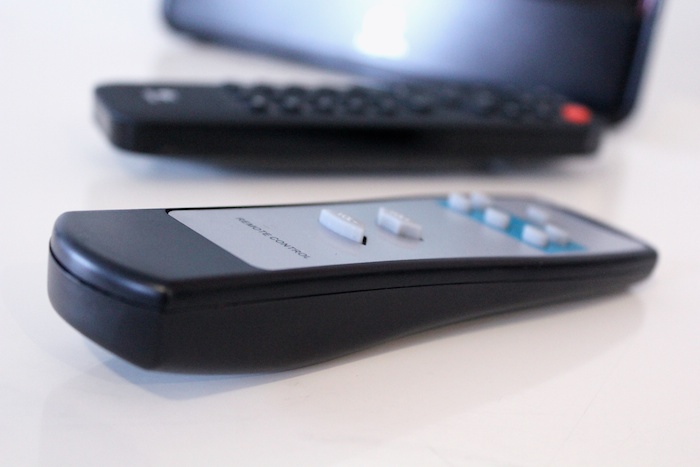 In terms of having your cake an eating it, pairing the Sonofa’GUM 5500 with the Eastern Electric MiniMax DAC see the two plain black budget boxes work in tandem to pull way ahead of the performance of the Peachtree Nova, the Aus-Chinese amplifier giving the Nova a clear lesson in how to drive more difficult loads.  The Sonofa’GUM draws on its high-current output (passed on by its forefathers) to drive loudspeakers that would make the Nova whince with pre-emptive pain.  I went with the Usher S-520 for the ultimate in eye-bulging, technicolour detail. The Wharfedale Diamond 9.1 are for those with longer listening periods in mind.  They are smoother and more moderate in their top end.  Nothing is straightforward in hifi – the Sonofa’GUM 5500 clenched the S-520’s bass with tighter fist than the Virtue Sensation M901 (AU$1200).  The Sonofa’GUM doesn’t have the Virtue’s tonal refinement, but its trouser wearing was unmistakable when partnered with the Ushers.  This was a visceral (in a good way), heart-stopping listening experience.

Downsizing the theoretical spend still further, the Audio-gd NFB-2 (US$450) made a more convincing move on the REDGUM with its less showy approach to digital conversion.  The dynamics of the Sonofa’GUM 5500 counterbalanced the austerity of the Audio-gd just nicely.  The trio of a NFB-2/Sonofa’GUM/9.1 ticks all the budget system boxes (around AU$1200) and produces a superb sound for the money – I doubt there’d be a better budget system available in Australia right now.  DAC, amplifier and speakers for less than the Peachtree Nova itself…and superior performance to boot.  This is a journey to the core of budget systems, away from dusty old salesmen who would steer you toward wallet-violating “Gentlemen’s amplifiers”.

The Sonofa’GUM 5500 is a way for REDGUM to show that “Made in China” might mean a few compromises hither and thither, but the baby and bathwater can remain in tact.  More than that, it means true budget hifi for the rest of us.  Much like the Wharfedale Diamond 10.1 loudspeakers, the Sonofa’GUM 5500 is an everyman product: an entry level integrated that could easily see Rotel/NAD/Cambridge lose their footing on the very first few rungs end of the affordable hifi ladder…if only cash-strapped audiophiles knew about it.  So now you do.  That REDGUM profits stay in Australia sweetens the icing on the aforementioned cake.  Moreover, your smugness in buying local AND buying cheap remains water-tight. 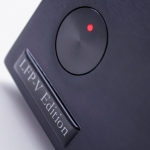 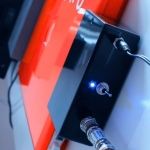