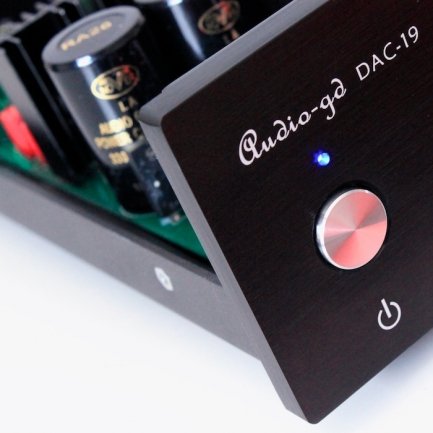 Oftentimes, DACs are about right and wrong.  It’s not so much about resolution or detail or musicality – it can be boiled down to something far more fundamental. Does it sound “right” or does it sound “wrong”?  You either enjoy the sound or you don’t.  It either makes you smile or it doesn’t.

If company image is a true barometer of commercial success, Chinese company Audio-gd have it nailed: their lead designer and (presumably) CEO is called “Kingwa” (renamed from the more pedestrian Qin Hua).  He sounds like a warrior, an enigma, a legend…a warrior legend!  I like to imagine that Kingwa designs and directs whilst sat atop an enormous throne, surrounded by minions, each one of whom are named Edwin. 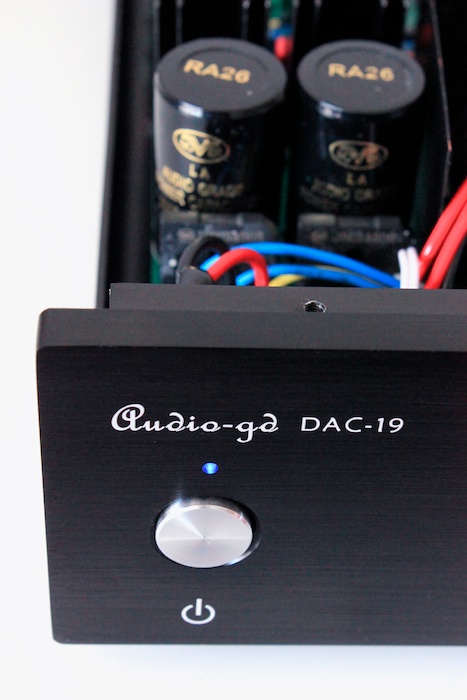 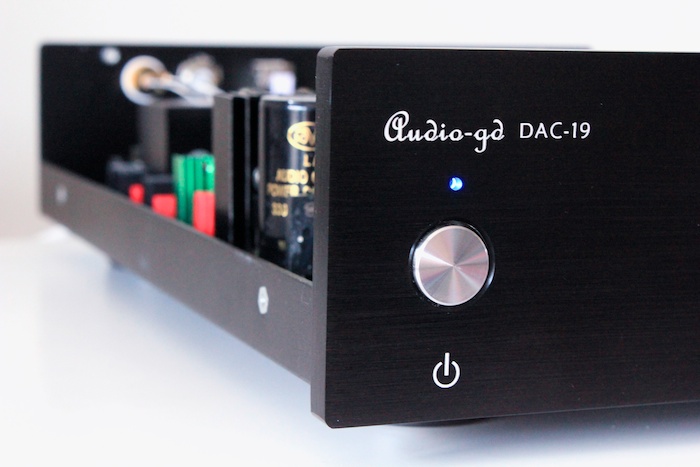 Communicating with Audio-gd via email is a hit and miss affair.  My request for some background information on Audio-gd and the design philosophy behind the NFB-2 DAC was misinterpreted as an intention to order (“Thank you Edwin, but I already have one.”).  No mind – Kingwa has meticulously laid out his product range and design philosophy for each and every DAC, head-amplifier and amplifier on his website.  The man’s attention to detail is a nerd-consumer’s dream.The NFB-2 (US$450) is Audio-gd’s only unbalanced ACSS DAC. The ACSS sockets allow for (superior?) connectivity to other Audio-gd products and – sharpen your pencils Armchair Audiophiles – the NFB-2 runs dual mono Wolfson WM8741 chips.  WM8741 being only one increment away from the WM8740 that sits inside every Cambridge Audio DacMagic (AU$550).  And yet, letting a small conclusion slip early on, they could not be more different in the way they sound.  Maybe the vastly different dynamic range of the two Wolfson chips has something to do with this?  The Audio-gd website declares the dynamic range of the WM8741 to be 128 DB and the WM8740 to be 117 DB. 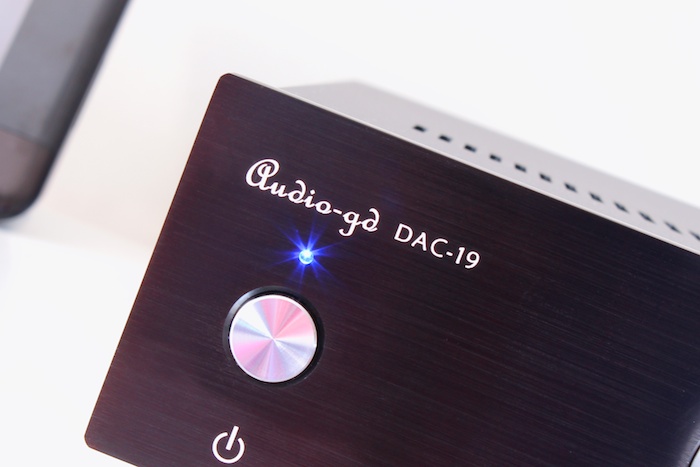 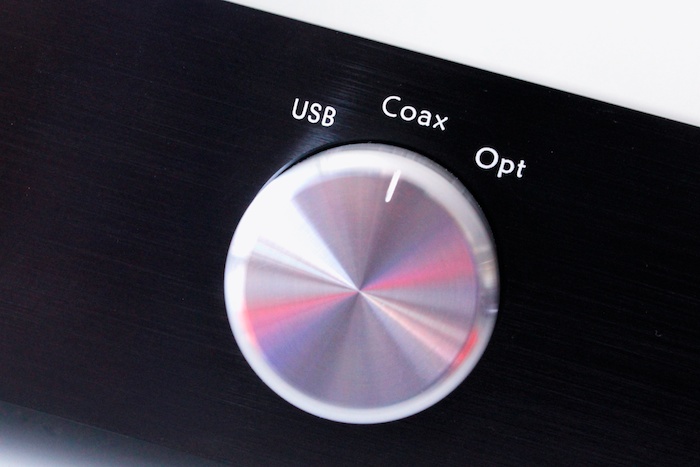 The unit is covered by a three year warranty, with Audio-gd bearing shipping costs BOTH ways in the first year. Seriously impressive for those anxious about buying direct from overseas. (At time of writing, Goods Victoria has been appointed as the Australian distributor but they have yet to develop an internet presence).  Even more reassuringly, Audio-gd burn in all their products for 100 hours before despatching them to customers.

Like nearly all Audio-gd products, the NFB-2 DAC is engineered into the middle of next week – with a heavy emphasis on power supply cleanliness.  The poor old DacMagic is saddled with a wall-wart switching PSU – maybe this is why it sounds long in the tooth?  Maybe this is why is sounds so utterly “digital” to these ears: emotionally disconnected, unwelcoming.  Or maybe I just prefer a splash of colour?  No, that can’t be it.  The NFB-2 doesn’t sound coloured.

Time for some technical nitty-gritty. The Audio-gd NFB-2 DAC is a non-feedback design with an 50W R-core transformer…at least, that’s what can be found on the product information page on the Audio-gd website.  Allow me to copy and paste (and save you the click): 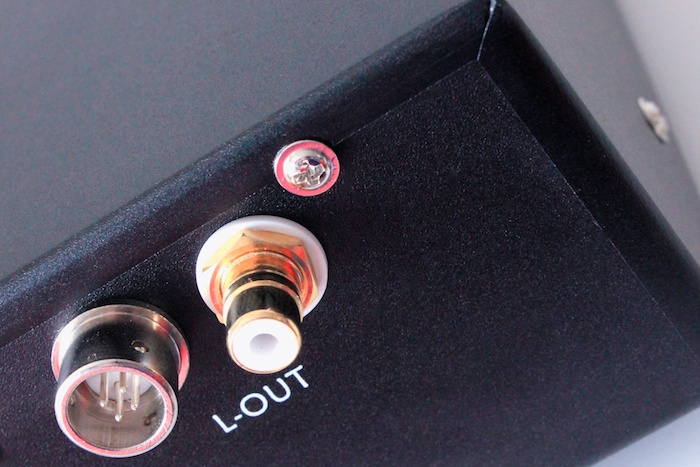 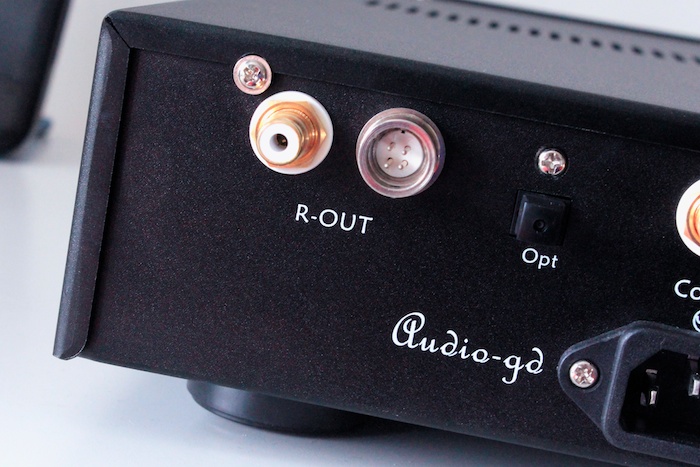 The ACSS is a non-feedback technology made with discrete amplifiers. Most people know the global feedback design can offer better specs in test measurements, and non-feedback can’t do well in test measurements but can offer better sound for the human’s ears. Here is a conflict of the classic circuits. But the ACSS opens a new field, it can offer a least coloration sound which is more neutral with very low distortion and high linearity. So it can retain the dynamics, detail and neutral sound but not sound bright or harsh.

The output buffers are Non-feedback, for low impedance, we applied a two-stage parallel connection, the output impedance is only 20 ohms.”

“NFB-2 applies the excellent DA chip WM8741 and excellent analog output stages, but these are not the only keys of the best sound. The power supply is most important. Even applying the best DA chip and the best amp, if matched to a normal power supply, the total sound may still be average or sound musical but can’t be neutral and detailed. That is why it is easy to find hi-end grade gears maybe without the best chips or amp stages, but with plenteous dedicated DC supply circuits.

The class A parallel connection PSU has very high input impedance for avoid pulse through the PSU from affecting the DAC and low output impedance with very fast speed and high linear , so it is a very clean power supply. In my experience, its sound is better than battery power supply, better human sound and neutral.”

Being an electronics layman I won’t profess to understand the talk of “Vishay resistors” and “Non-feedback power supplies”, but my experience with many, many amplifiers tells me that power supply quality DOES matter. Moreover, it underscores my belief that there are three keys to DAC design success: implementation, implementation and implementation.  Kingwa’s implementations are nothing short of thorough.

The NFB-2’s aluminium chassis is sturdy with a large source selector switch dominating the faceplate: coaxial, optical and USB are all covered.  USB input capabilities top out at 24Bit/96KHz, no matter which sub-version of the NFB-2 you choose: My review unit is the 96KHz version with the (allegedly superior) DIR9001 receiver chip; which means better jitter rejection. The 192KHz version deploys a CS8416 receiver chip, but I’m unable to test whether or not you’ll hear a difference – probably unlikely, but you never know.  My advice: they both cost the same, so go with the 96KHz version unless you have a bucketload of super hi-res files.

The NFB-2 definitely improves as it warms up.  Thirty minutes should do it.  FLACs of a 2004 remaster of Steely Dan’s Gauchowas the first album into the Squeezebox playlist.  This is a DAC that’s not as liquid as the TeraDak Chameleon NOS DAC – Donald Fagen’s vocal line isn’t as prominent. Instead, there is a distinctive analogue quality that immediately puts it head and shoulders above the Cambridge DacMagic.  Detail retrieval is very good (whatever that means), as is timing. It had better pace and more snap than the Maverick TubeMagic and is more on par with the MHDT Paradisea NOS DAC when comparing PRaT prowess. With no tube in its output stage, the NFB-2 has the superior bass definition and is comparatively less murky than both the MHDT Paradisea and (especially) the Maverick. 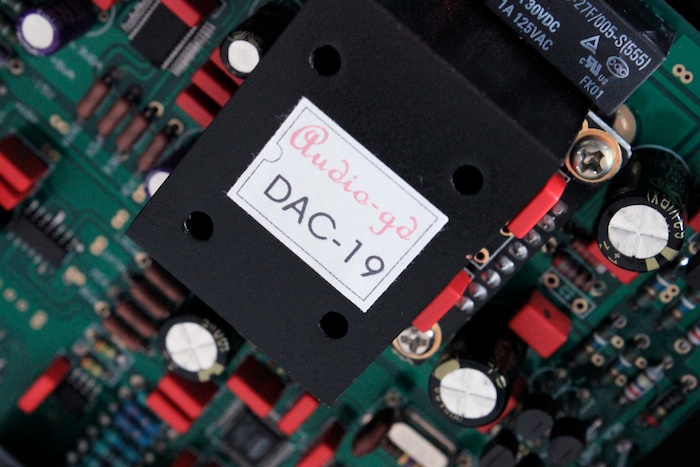 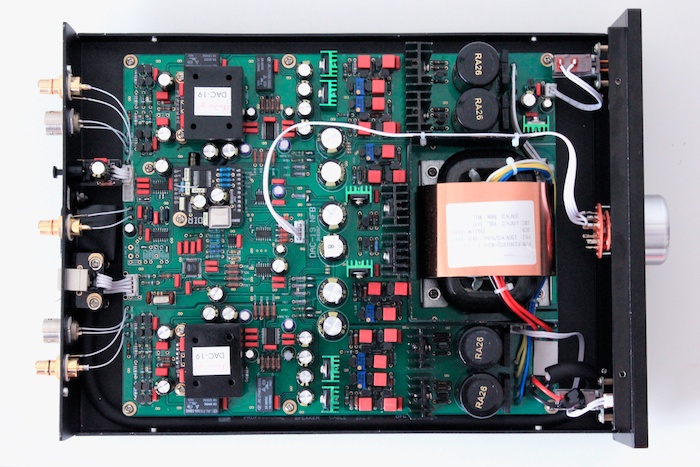 The Maverick might be just over half the price of the NFB-2, but Kingwa offers another member of the DAC-19 family in the (limited run) NFB-3 for a paltry US$300 that is said to be excruciatingly close to the NFB-2’s sonic performance. If this is even halfway true, the NFB-3 has the potential to overthrow the Maverick at its ~AU$300 price point.  When sat side-by-side, Audio-gd’s engineering renders the Maverick as Meccano-esque. In short, the Maverick should consider itself “on notice”.

Prolonged listening showed the NFB-2 to be a far from imposing houseguest.  It has little sonic signature of its own.  It didn’t obviously try to draw attention to itself or stand out amongst the competition. Its invisibility in the hifi chain is probably its strongest asset.  Cliche alert: it gets out of the way of the music.

Another standout feature of the NFB-2 is that it doesn’t sound skeletal or digital (or metallic).  There’s meat aplenty on them bones.  It fleshed out Hardfloor’s synthetic 303 warbles and 909 drum patterns to sound positively chunky.  Phat?  Full phat. 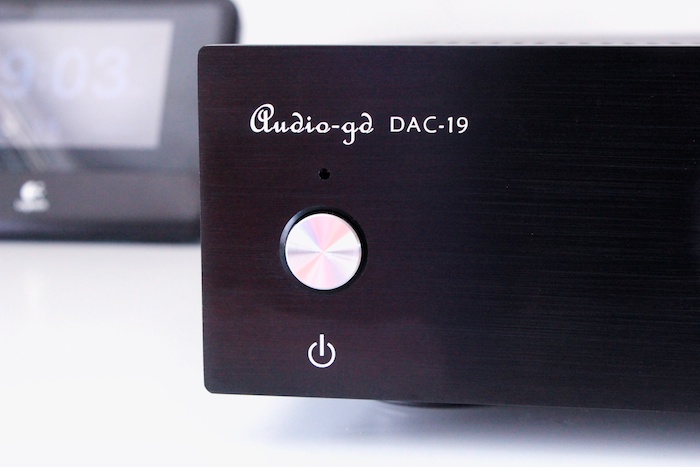 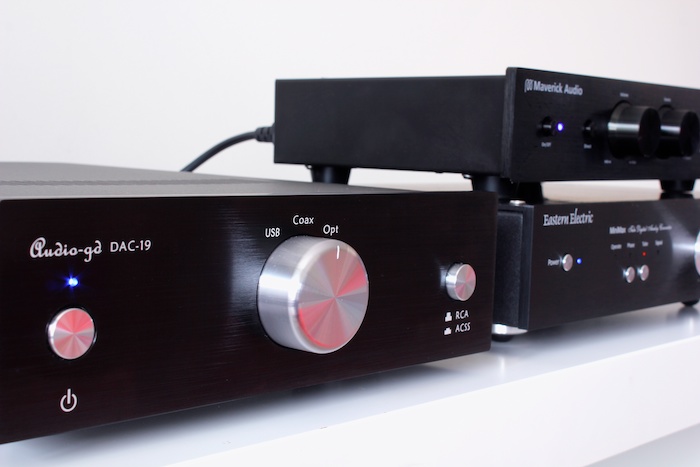 This Audio-gd can’t quite match the Eastern Electric Minimax (AU$800) for dynamics or detail (what can at less than a grand?).  The Eastern Electric DAC possesses a most ostentatious and gregarious personality that requires some careful system matching.. The Audio-gd would suit those looking to keep their system’s brightness in check, or those who are already more than satisfied with their system’s dynamic prowess.  I experienced best results with the Audio-gd sat behind the exceptionally expressive pairing of a Red Wine Audio integrated amplifier and Omega Super 6 XRS.  The Minimax over-egged the dynamics of that pudding, instead favouring a JLTi EL34 amplifier pushing a Wharefdale Diamond 9.1.

It isn’t all one-way traffic in the Minimax’s favour. Eastern Electric’s ESS Sabre implementation might reach higher and lower than the Audio-gd’s twin-Wolfson effort, but the Audio-gd is positively smoother, more mature, more gentlemanly. AND it won’t murder your ears with poor source material, such as The Soft Boys’ buzzsaw-psychedelia of Underwater Moonlight which can decapitate listeners in clinical systems.

I should qualify the above with some important context: the Eastern Electric Minimax is a freak of nature!  It offers comparable performance to the Wyred 4 Sound DAC-2 at half the price.  Impressive bang for buck…which the Audio-gd NFB-2 more than matches when we scale our expectations back to the ~AU$500 DAC market.  To my ears, the Audio-gd is nearly as accomplished as the Eastern Electric – for different reasons – which in turn is almost the match of the AU$1900 Wyred4Sound DAC-2.  It’s a bit of a mind bender that means your next DAC purchase need not be a wallet bender. 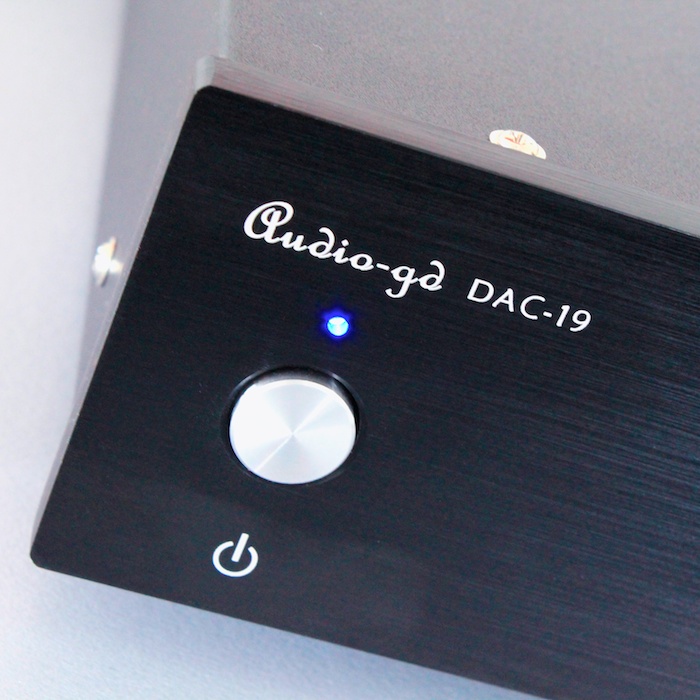 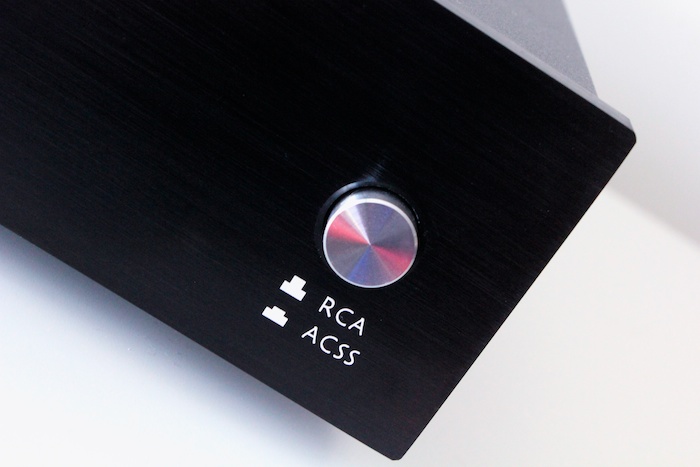 With build quality from the smart end of town and a austere-but-detailed sound, Kingwa might well be habouring aspirations of becoming a sorcerer: a sigma-delta DAC chip implementation without the dryness, neutrality without the emotional disconnection.  In the NFB-2, Audio-gd have redefined the benchmark from which all future budget DACs shall be judged.  By taking the time to exact an effective implementation Kingwa has made a DAC that sounds so utterly “right”. I enjoyed every minute of it.  It made me smile.  I could easily live with the Audio-gd NFB-2 in my main rig and not feel that I was missing out on detail or be annoyed by frequency tailoring (because there isn’t any in evidence). We have before us a budget DAC that dares to dream the impossible – musical neutrality that doesn’t let its head rule its heart.

The Audio-gd NFB-2 stuns with its understated “rightness” and draws a clear line in the sand between itself and other budget DACs. Knockout! 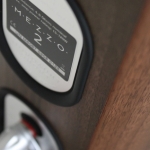 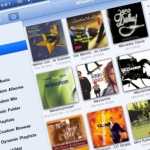