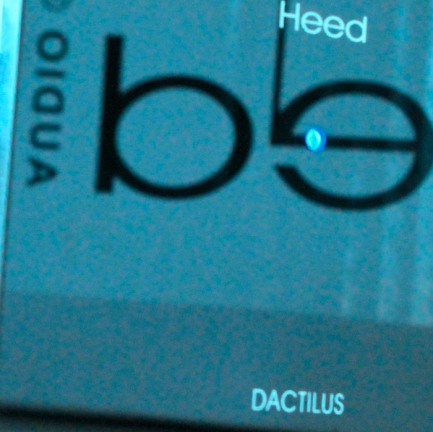 The turn of phrase, the choice of words, the pacing of a review often reflects the product under scrutiny. I often see the review itself an extended onomatopoeia. This one should read as lean, concise and clean (with a hint of warmth).

Heed is a lesser-know brand that operates out of lesser hifi-renowned Hungary. It’s a company that appears to have cut its teeth on headphone amplifiers and phono stages.  Heed makes no bold claims on its website and is far removed from the flashy, slick world of an all-consuming marketing department – usually a solid indicator that the product has been designed by someone passionate and knowledgable (but who perhaps has not fully realised the best way to monetise his skills).  Yes, I’m making assumption here but the information on the Dactilus itself is thin on the ground: it’s delta/sigma, it’s 24/96, it offers only coaxial and toslink (S/PDIF) inputs; USB folk are out of luck.From crack of the starting gun, the buyer has choices to make. The Heed Dactilus (AU$425) is either a one-box or two box affair, depending on whether you stick with the stock S-PSU or opt for the matching Q-PSU power supply (AU$385).  Interestingly, in the US of A the Dactilus can only be bought with the Q-PSU bundled into the bargain. 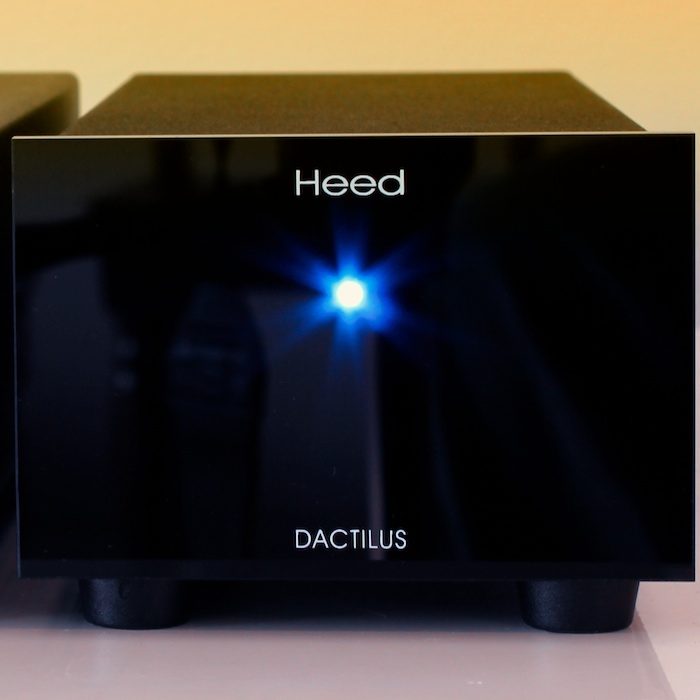 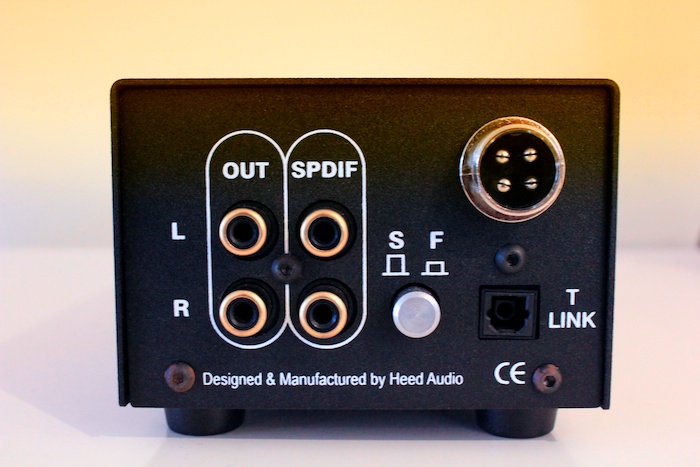 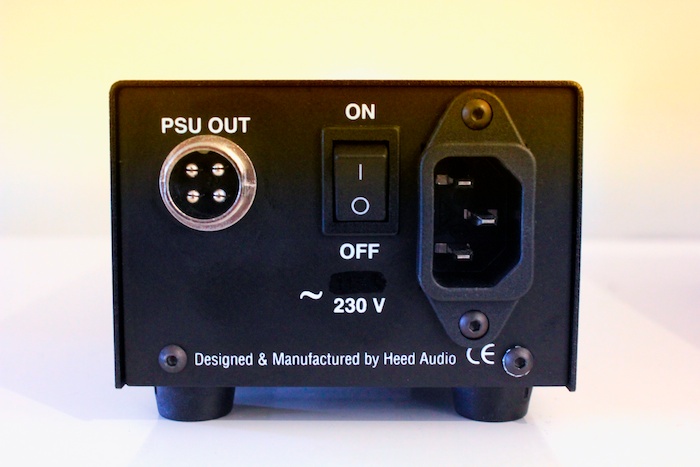 All bases were covered in my review package: the Dactilus itself, the stock S-PSU (linear, not switching) as well as the Q-PSU. I wanted to hear for myself if the external power box justified nearly double the dollars down.  One can’t fault the packaging of either the DAC or the identically-sized Q-PSU. Each ships in a neatly branded box with plenty of internal foam padding. I mention this as Serbia’s Dayens – also at the forefront of the Eastern European hifi renaissance – have adopted more laid back attitude towards securing their goods in transit so it’s good to see Heed taking a more stringent approach.
The build quality of both the Dactilus and Q-PSU are excellent. Styling is conservative. Manufacturer’s that err on the side of aesthetic caution are less likely to offend the eyes of those with many varied boxes already in their rack. It is my personal view that DACs should be understated – heard and not seen – but companies such as MHDT Labs and Wyred 4 Sound have taken a bolder approach. Horses for courses is the cliche that gets me off the hook here.

I lived with the Heed Dactilus (mainlined by the Q-PSU) in my second listening room for 8 weeks before moving it into my current reference system: a Red Wine Audio Signature 30.2 LFP-V edition pushing a pair of Omega Super 6 XRS. The Dactilus + Q-PSU cohabited with my favourite sub-$1000 DAC (at time of writing): the TeraDak Chameleon. 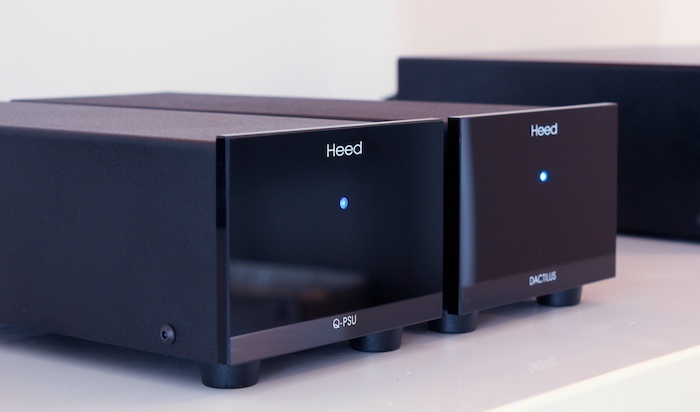 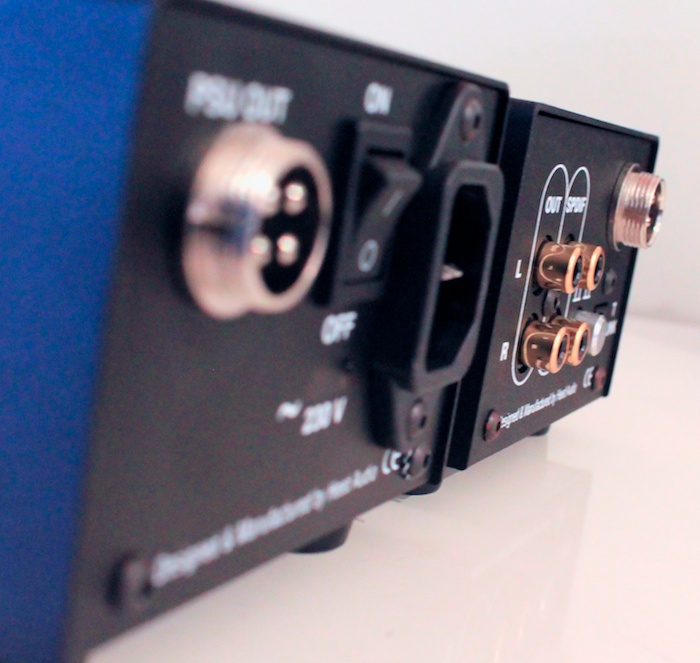 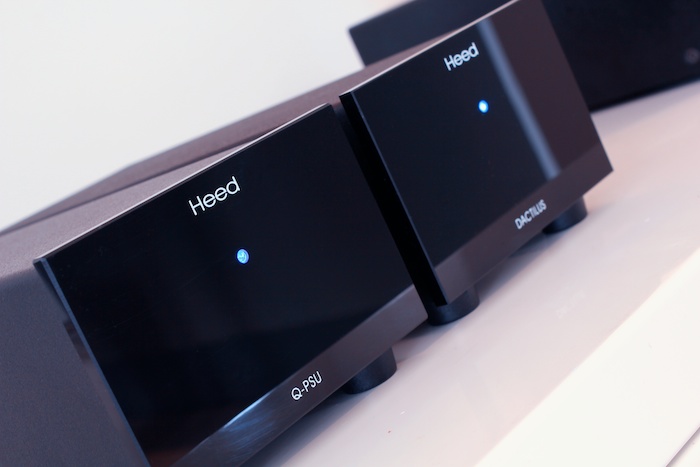 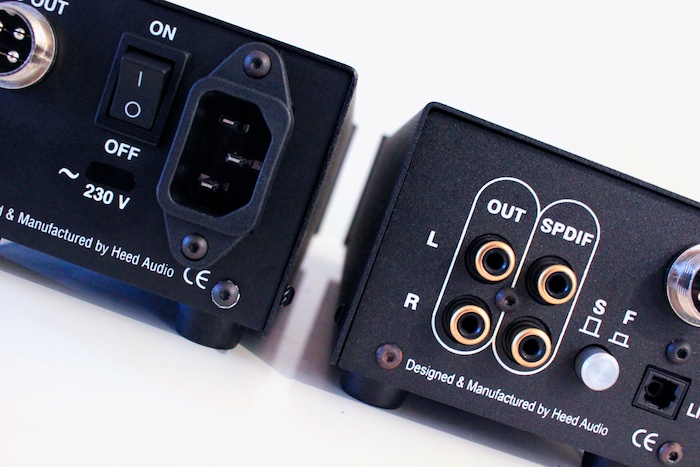 The Dactilus + Q-PSU digs a little deeper for detail than the two-box TeraDak. I noted more evidence of musical decay in the upper registers, particularly with cymbals and hihats on Neil Young and Crazy Horse’s epic live opus Weld.  Bass was stronger and treble a little sweeter with the Heed.  The Dactilus is very even across the frequency range, whereas the TeraDak is strong in the midrange and a little bass-shy.

The Dactilus’ strongest asset is that it has no obvious predilection for any particular or genre of music or – for that matter – associated components. I had it decode ones and zeroes behind a Virtue Sensation M901 and Wharefdale Diamond 9.1 combo and it performed as it did with the more costly and superior sounding reference system.  That is to say, its traits (or lack of them) were still in evidence. The Heed Dactilus speaks politely. It might not excite on the first (or the twentieth!) listen, but it is very easy on the ear and has no personality quirks or oddities. Pace and timing are also excellent – easily the match of the TeraDak Chameleon. The Dactilus is both soft  and enthusiastic. Despite its delta-sigma origins, at no time did it sound impersonal or matter-of-fact. In fact, on some material it connoted a late-afternoon warmth. Nice.

This DAC’s sonic conservatism also pointed to the its weak point: diminished scale and drama with macro-dynamic swings. It came up a little short on (what should be the) angry bombast of The Waterboys’ “Be My Enemy”, especially when compared directly to the exacting detail and full-swing punch of the Wyred 4 Sound DAC-2. Heed’s offering didn’t quite capture the acerbic nature of Mike Scott’s urgent vocal delivery. If you are stickler for intensity and precision, this probably isn’t the DAC for you.  If you favour the energy and fluidity of NOS DACs, you will probably find this more to your liking.  As always, component matching is a factor. The Heed might best reside behind a colder, more analytical solid state amplifier with an abundance of power and punch. One that would underscore the Dactilus’ strength of timing and mask its diminished dynamics. I’m thinking Naim, Musical Fidelity, Krell. 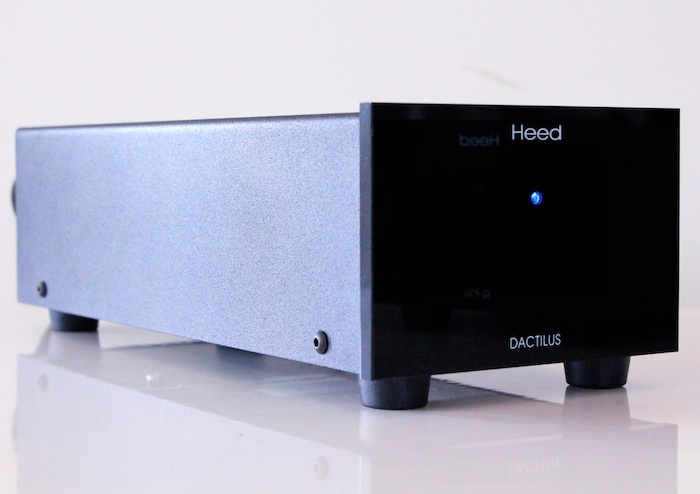 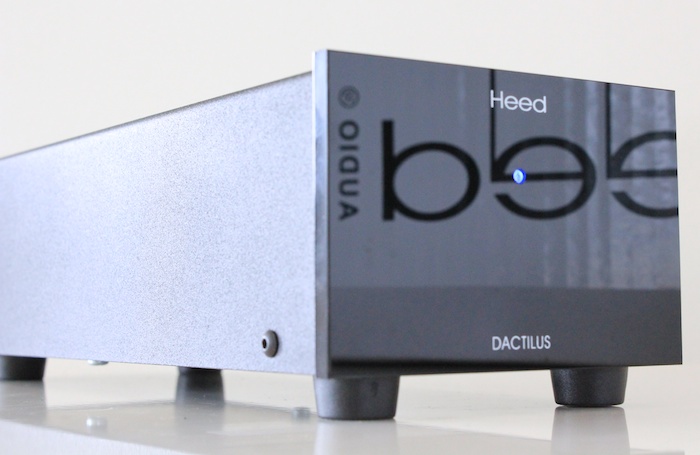 Micro dynamics were a different story. The Dactilus missed none of the subtleties of Pulp’s This Is Hardcore.  Here was a bleak album conveyed with measured efficiency and charm (two words that precis this DAC’s abilities quite nicely). The sampled-horn loops of the title track had a pleasing tone and Jarvis Cocker’s numerous drop-dead one-liners were all clearly evidenced along with their attendant tonal flourishes. No muddy or distant midrange here.

Towards the end of the review period, the Dactilus flew solo (S-PSU only) with a Miniwatt N3 and a pair of homebrew Tangband single driver “pipe” speakers. The Dactilus displayed more momentum and energy than the DAC that inhabits the internals of the Squeezebox Touch, which is no slouch in its own right.  Underworld’s “Dark & Long” bass groove chugged along in a similar fashion with the Dactilus, but the greater clarity in the supportive mid-range percussion facilitated a tighter-sounding performance. Even without the Q-PSU, in a more modest system, the Dactilus proved its worth – not through greater detail retrieval (per se), but more impetus, more vitality. 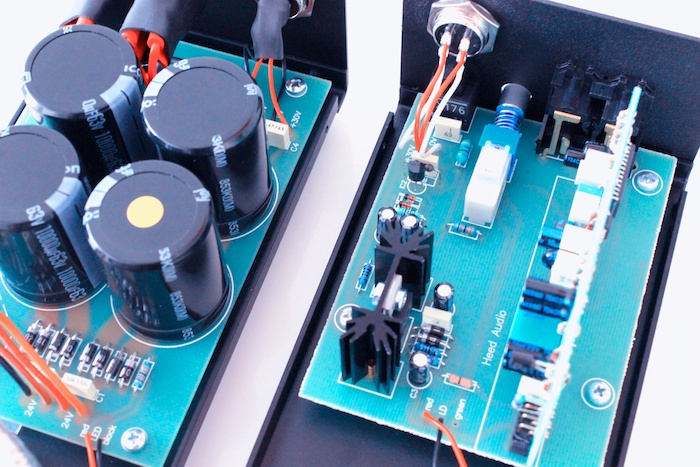 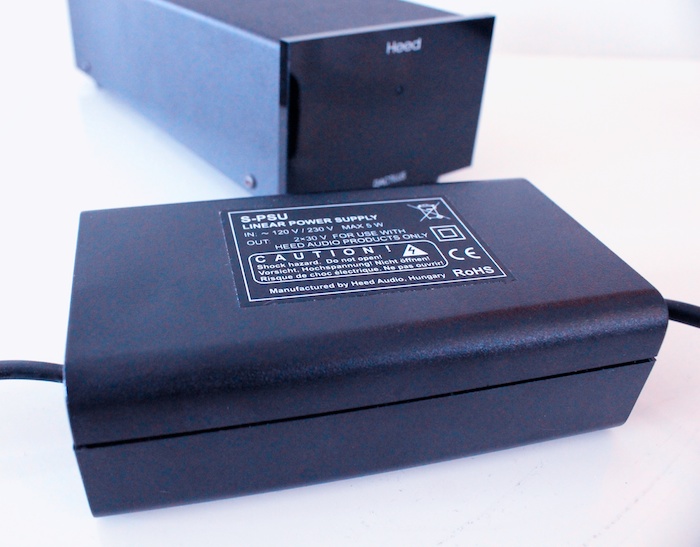 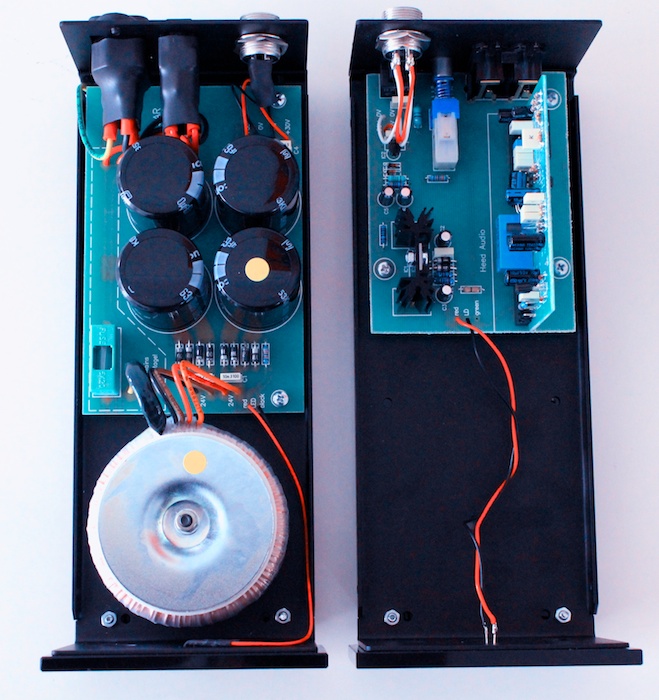 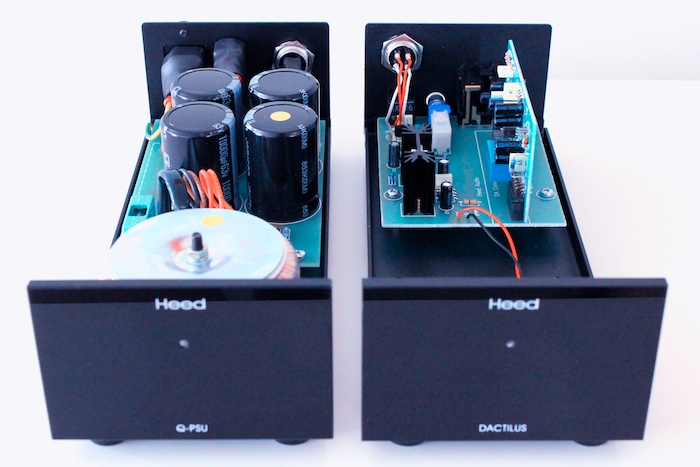 This then begs the question: what does the Q-PSU add to the S-PSU-fuelled unit’s audible skillset? After all, the S-PSU ain’t a switching varietal – it’s linear, baby. And yet, even on the more modest of test systems, the improvements brought by the Q-PSU were significant: greater presence, punchier bass and an altogether more engaging listen. Inverting the process, Crocodile’s woozy blues rock of “Stoned To Death” sounded impoverished without the Q-PSU.  The solo Dactilus provides a good-but-subtle improvement over the Squeezebox Touch; predominantly in the time domain.  Only when I pitted the pimped-up power supplied Dactilus against the Logitech unit did I hear something convincingly superior, notably with soundstage organisation and depth.

Looking at the numbers, it’s tough to ignore the low entry price of the Dactilus. It’s definitely a budget DAC worth considering for those looking to extract better PRaT from their super-budget CD player or Sonos or Squeezebox (particularly the Classic). The Q-PSU almost doubles the price, yes, but it’s an upgrade that brings unmistakable results. A separately boxed power supply should never be underestimated and the Dactilus/Q-PSU pairing is no exception. Sitting sonically somewhere between the Cambridge DacMagic and the TeraDak Chameleon, those that find the NOS sound too squidgy and the Cambridge too cold will find much to like here: an AU$800 left turn gets you substantial resolution, excellent timing and a well-shaped bottom end. 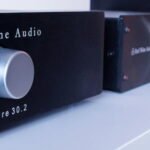 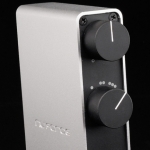