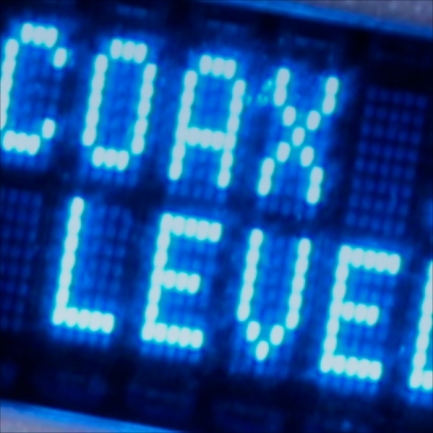 In the world of hifi, the seven degrees of separation could easily be hacked down to four…perhaps even three. Rick Cullen of Cullen Circuits used to be the primary builder for PS Audio. EJ Sarmento – who worked at Cullen Circuits with Rick – formed Wyred 4 Sound and made an immediate splash with his Ice-powered amplifiers. Operating out of the same factory, the Cullen Circuits operation will be phased out in the near future. An over-simplification of the story for sure, but now Wyred4Sound have two DACs on the table: the DAC-1 and the DAC-2, both designed around an ESS SabreDAC, which has seen mainstream market penetration thanks to SignalPath’s delicious Peachtree Nova (AU$1799). (Keener readers will already know that the W4S DAC-2 uses a 9018 chip compared to the Nova’s 9006).

The feature set of the W4S DAC-2 (AU$1950) is nigh on explosive: 24/192 asynchronous USB, i2S input over non-standard HDMI, AES/EBU input, two coaxial inputs, two toslink inputs, balanced (and unbalanced) outputs and a 32-bit volume control – a real boon for anyone wanting to go direct to a power amplifier. The DAC-2 demands installation of proprietary drivers for USB audio which holds it back form being true plug and play. A little more user effort is called for, but it’s no biggie in the domain of hi-res audio.Hacked USB output from a Squeezebox Touch is not possible. In fact, users who don’t require balanced outputs and a digital volume control are urged to save some coin and look at the DAC-1 (AU$1325). Despite internet specifications stating to the contrary, the DAC-1 now sports a 24/192 USB input. 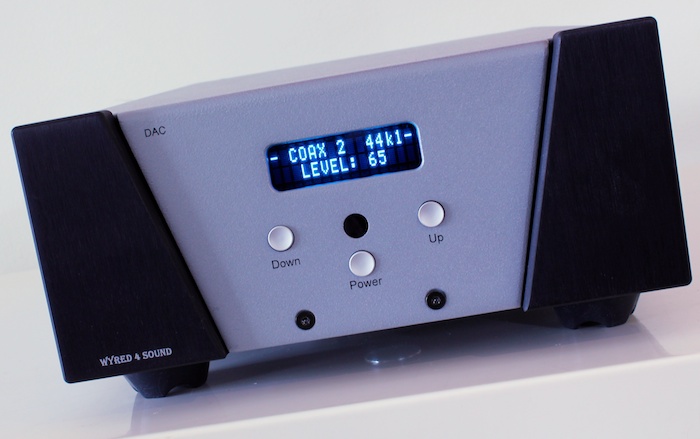 Wyred4Sound have gone with the ESS “reference” 9018 decoding chip and a discrete output stage, so no op-amps (nice!). The housing is solid, but lacks the minimalist style of the similarly price Bel Canto DAC 1.5. In fact, aesthetic appeal is not this DAC’s strong suit. It would look more at home in a Linux server rack than in one’s hifi cabinet. The VFD display is small and cannot be read from the listening position. Get closer, and the user must ensure that his/her line of sight is vertically aligned with the display to read it properly – annoying. However, it provides information on source selection, volume level and sample rate as well as a HT bypass option and balance. Advanced features can be accessed by giving the unit the three-fingured salute whilst in standby mode. From there, one can adjust volume stepping, PCM rolloff and minutiae that lies beyond the scope of this review. The accompanying remote is pleasant enough but has some odd button locations: why are ‘volume up’ and ‘volume down’ not immediately next to each other?

The test system comprised a Squeezebox Touch, a Virtue Sensation M901 integrated amplifier and two of the most self-disciplined (and widely lauded) troop leaders of the budget speaker parade: the Wharfedale Diamond 9.1 and the Usher S-520, both of which sound more than sufficiently distinct.

The Style Council’s 1988 swansong Confessions Of A Pop Group is a veritable melting pot of musical genres: soul, piano ballads, female vocal, white-boy funk and jazz. It’s a great album for running hifi gear though its paces. Listening with the Wyred4Sound in charge of the binary interpretation, I was reminded of the first time I saw a Monet exhibition at the National Gallery in Canberra. The disparity between the posters, re-prints, postcards, internet images and the Monet originals was positively arresting. I was unprepared for the sheer intensity of colour. 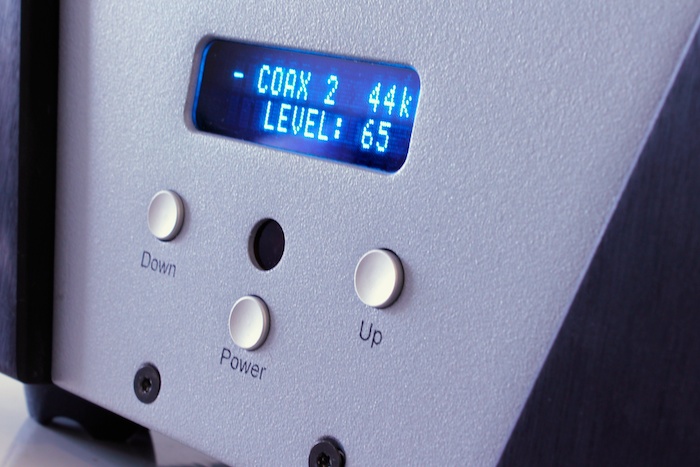 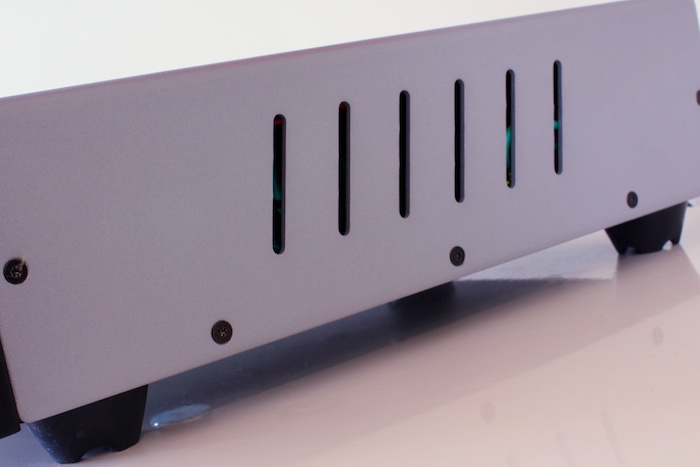 Likewise with the Wyred4Sound. Here was a DAC that painted in colours that were positively iridescent – music possessed more detail-as-life than its sub-$1000 competitors. I reached for a Maverick TubeMagic D1 (AU$299) which sounded positively sun-bleached by comparison. The piano that dominates the first half of Confessions had me reaching for words such a ‘real’. ‘true’, ‘tangible’ etc. However, the W4S DAC-2 has none of the fluidity of the TeraDak Chameleon (AU$580) – a pity. Where the TeraDak is light on in the bass department, the Wyred4Sound thumps it home with determination and definition and – for my tastes – was a touch overwhelming.

Sufjan Steven’s horn section drove the room with commanding bombast and I quickly concluded that the Wyred4Sound’s ESS Sabre chip choice (and implementation) was as strong with organic instrumentation as it was with synthetic: it was definite, deliberate and chock full of attack. It was also detailed without being edgy or unpleasant – the very same traits that I admired in the Peachtree Nova were present here, its sound reminiscent of the epic American movies from the 1930s that were shot in the retina-mugging Technicolor. This W4S DAC-2 could well be the Ben Hur of the DAC world: its soundstage is positively panoramic.

Oh, Matt Johnson, where did you go? In the 80s, The The were my other love (second only to Talking Heads). I’ve heard songs like “The Beat(en) Generation” a thousand times over the years. That single was the iron fist in a velvet-glove that first punctured the mainstream for Matt Johnson and my first taste of teenage music choice vindication. It’s easy singalong chorus and acoustic strum was heavily rotated on BBC Radio 1 in 1989 and gave Johnson air-time to talk about the imminent rise of Islam and of the multitudinous little wars to come. He foresaw the first Iraq conflict by a good eighteen months. A neat way to ‘promote’ Mind Bomb for sure… 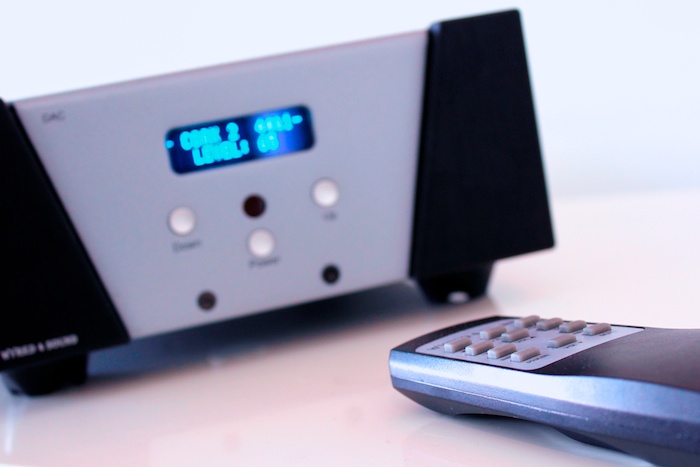 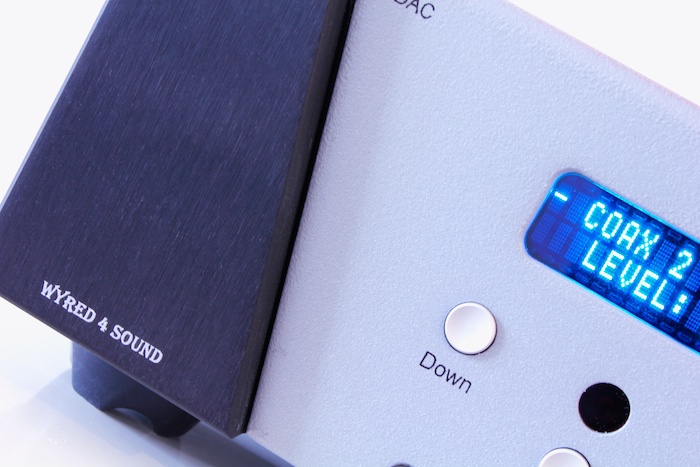 …twenty years later and I still know every inch of Mind Bomb – inside out and upside down. Every atmospheric swirl, every vocal tick, every trumpet flare.It was so critical to my formative years that it is part of my very fabric as a music fan. Running Mind Bomb through the Wyred4Sound predictably forces more resolution from the mix: greater decay on the crack of David Palmer’s snare on “The Violence Of Truth”, more recording studio atmosphere on “Armageddon Days (Are Here Again)” – it sounds more like a live session than ever before – and Sinead O’Connor’s guest vocal on “Kingdom Of Rain” is given more breathing room. The leading transients of Johnny Marr’s acoustic guitar strums are pushed further out into the room, without ever sounding forward or over-insistent.However, “Gravitate To Me”‘s dense fury caused the upper mids to flare when vocal met harmonica or harmonica met horn section. Ouch.

A few notes on system synergy: the commanding bass from the W4S DAC-2 will be a delight to many – it’s big and bombastic (and tight). The side-effects of which were an over-inflated mid-bass hump with the Wharfedale Diamond 9.1. When switching to the Usher loudspeakers for Simian Mobile Disco’s Is Fixed DJ mix, the relentless top-end detail of the Wyred4Sound proved to be too much when married to the Usher’s more insistent upper frequency range. In the case of the S-520, I would opt for a less fatiguing DAC/speaker pairing. If one could combine the bottom end of the Usher with the top end of the Wharfedale, a more pleasing sound could be achieved. Based upon my listening experience, a loudspeaker with a smoother treble and free from mid-bass trickery is advisable. 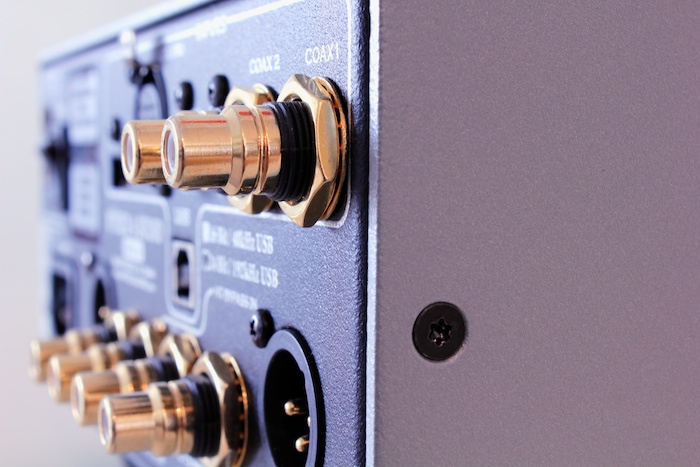 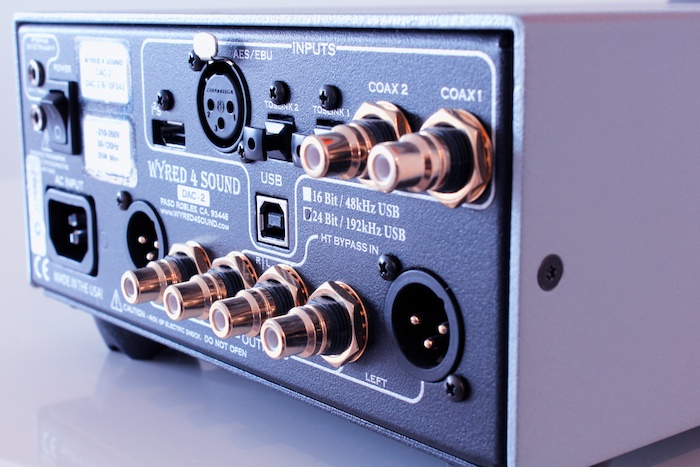 Relocating the W4S DAC-2 to another system of Omega Super XRS 6 loudspeakers powered by a Red Wine Audio 30.2 integrated amplifier saw the detail prove to be more surgical in its precision. These single drivers obscure little; they are unflinchingly revealing. Flitting between the Red Wine Isabellina DAC and the W4S DAC-2 on The Chemical Brother’s “Where Do I Begin?” saw the latter offer superior spatial cues and a deeper soundstage. As the song swells from a simple reverse-looped guitar refrain into a psychedelic beat cacophony, the Red Wine Audio DAC is less precise in soundstage organisation but also the DAC that better captures the spirit of the song’s swaying undertow. The Wyred4Sound is not necessarily what one would refer to as ‘toe-tapping’. Its strengths lie in plumbing the depths to reveal an ocean of detailed wonderment – its role as a bathysphere of accuracy could hardly be challenged. Substituting the Red Wine Audio 30.2 for a Trafomatic Experience II integrated yielded more even results. Gone were the pin-prick leading edges, sufficiently smoothed by tubular counsel. A case could easily be made that the W4S DAC-2 would be more comfortable sat in the shadow of valve amplification.Only really let down by its finicky usability and workmanlike aesthetics, the Wyred4Sound DAC-2’s sonics are colourful but uncoloured.

Prominent bass aside, it doesn’t possess an easily identifiable sonic signature. It is detailed, yet neutral. Its soundstage is deep and wide and tall. It is engaging and doesn’t suffer from the oft-clinical indifference of delta-sigma DACs; instead opting to paint from a brilliantly rich palette. Instrumental separation is its strong suit. Moreover, the W4S DAC-2 shows that ‘accuracy’ doesn’t have to be a dirty (audiophile) word. The W4S DAC-2 is a brilliant riposte to the snobbery of ‘musical’ NOS DAC owners. It isn’t the greatest show on earth, but Cecil B Demille and William Wyler would’ve approved – a widescreen production filmed in brilliant Technicolor. 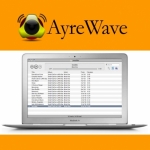 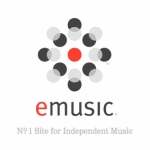