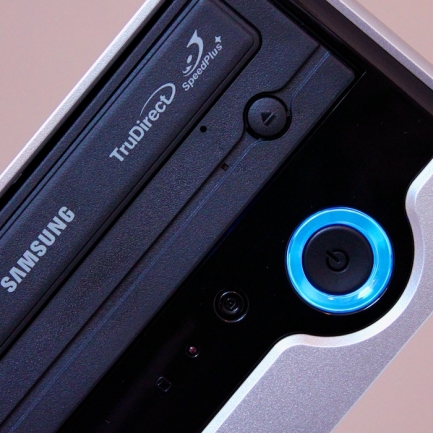 An open letter to the Australian VortexBox distributor, Peter Hocking:

I wish to extend my thanks to you for the loan of the VortexBox Appliance for these past few weeks – and thank you for your patience in answering my numerous emails. A recent visit to the Naim dealer in Sydney changed my view of the hifi business, subtly yet indelibly. Harry York of Audio Genesis proclaimed that selling hifi isn’t just about money and equipment, (more than anything) it is about people. Business cliche perhaps, but one that caused me to ruminate on the nature of hifi retail in Australia. With the new wave of online distributor-as-retailer business models coming thick and fast (and bricks and mortar stores closing), the importance of connecting with one’s customers has never been so critical.

Your component selection for the Australian version of the VortexBox Appliance seems solid enough: Atom processor, 1GB of RAM and (in my case) a 2TB hard drive. The addition of a dual layer DVD burner is not just a nice touch but pivotal to who have yet to rip their CD collections to digital audio formats (more on which later). The small footprint makes for a neat and simple machine that was swiftly hard-wired to my router within moments of its un-boxing. That the Appliance’s Fedora-based operating system is headless – no monitor, keyboard or mouse required – must be the reason that that boot time was so impressive: less than thirty seconds. The Appliance announced itself on my home network as “VortexBox” moments later and I had a fully functional NAS/media server hybrid ready to push tunes to my Squeezeboxen within less than five minutes of busting open the packaging. 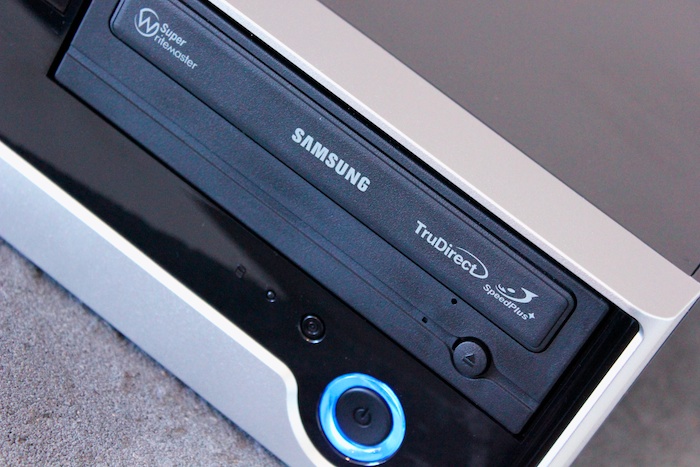 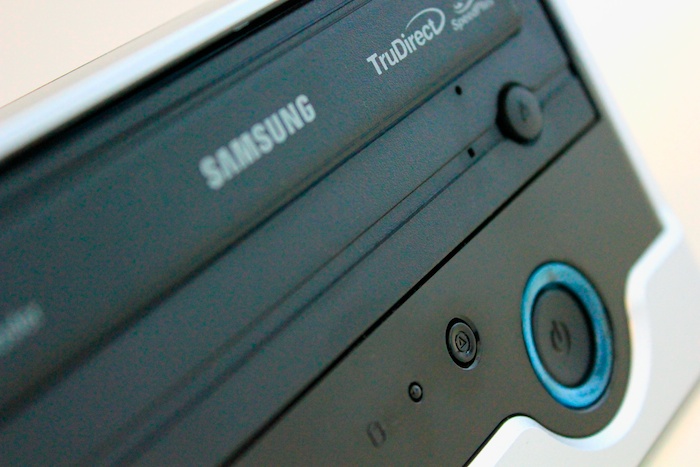 Immediately, I could see the benefit of having someone else worry about PC component selection – saving the end-user from fretting/sweating over Linux hardware compatibility issues. Moreover, the user doesn’t have to worry about OS install and configuration, setting up Samba file sharing, installing Squeezebox Server, DLNA server, DAAP server etc. It’s all done for you. Sure, the VortexBox.iso is available for free download, but many people have yet to overcome their perceptions that Linux requires command line expertise and would probably baulk at even giving this heavily customised Linux operating system a try. It is clear that you have attempted to bridge that gap with the Appliance. It was obvious from the get-go that you have successfully married the VortexBox OS to a fully-compatible hardware specification that has a green outlook on life. Never has the streaming audio newcomer been so tidily looked after.

The Appliance proved itself to be unshakeable in its four or five weeks of use in the engine room of my apartment. Within the first two days of use, I copied across my entire music library to the device. The Samba shares were nothing short of rock solid: ordinarily, relocating over 1TB of FLAC and MP3 would see network drop-outs or the server choke on the unrelenting torrent of incoming data. Not so with this device. That’s the beauty of Linux: its stability. Having said that, a stray cpu-hogging daemon plagued me for a few hours; easily fixed with a couple of emails to your good self and a visit to the VortexBox forum. It’s never enjoyable having to troubleshoot a mind-bending issue, but it gave me early exposure to the community that surrounds VortexBox and – like the Slim Devices forum – I found plenty of people on hand, willing to assist and impart advice. 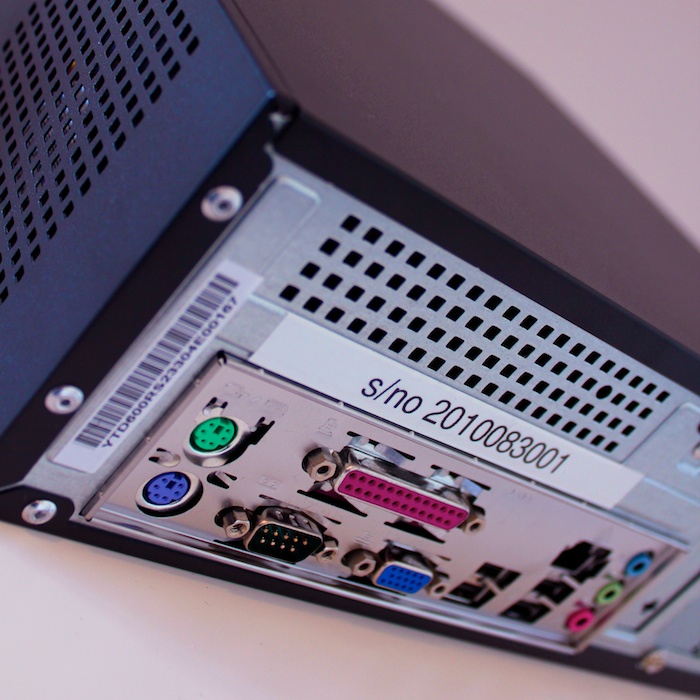 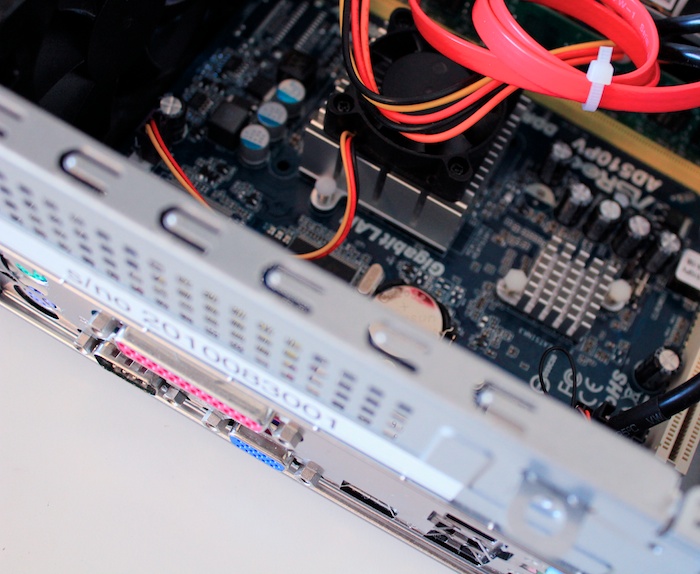 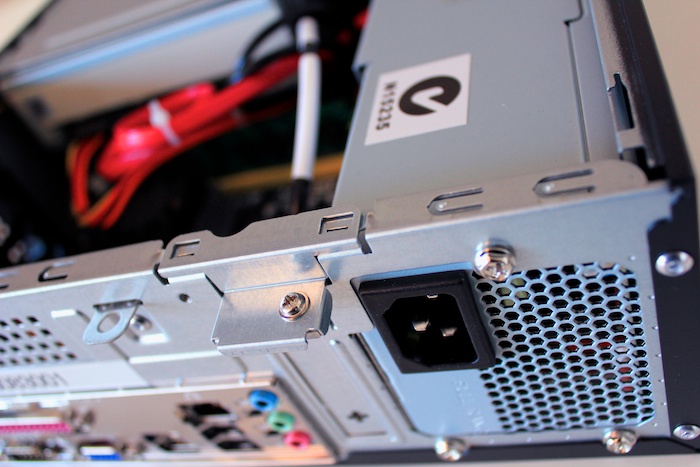 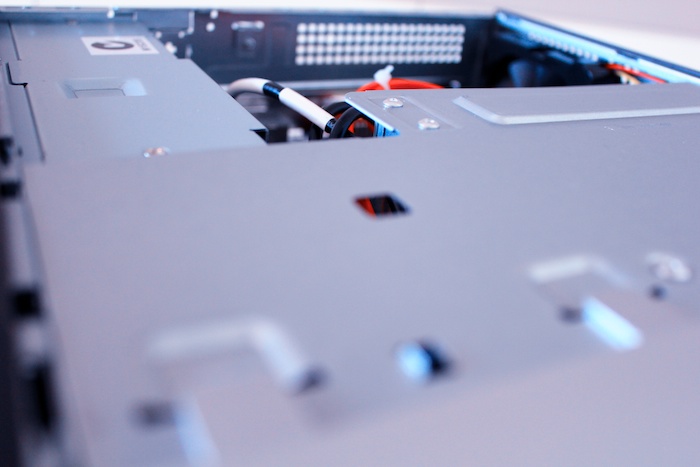 Obviously, the VortexBox Appliance brings no sonic signature to bare upon audio proceedings, so my assessment of its performance as a music server was a binary one. Either it worked or it didn’t. Changing the VortexBox’s IP address to a fixed one was simple – Squeezebox Server could then always be found at 192.168.0.20:9000 and the Appliance’s configuration panel at 192.168.0.20 (newcomers might benefit from a more in-depth explanation of the beauty of headless servers). The configuration interface is simple and clean but not without its quirks. There is also a lot to take in at first glance. The main page informed me of disk usage and VortexBox software version (1.5 at time of writing).

One of the killer features of the VortexBox appliance must be its user-friendly approach to getting one’s music from the CD onto the server: all the user has to do is insert the CD! After I pushed in David Byrne’s Miss AmericaCD single, fully-tagged MP3 and FLAC versions were available for streaming minutes later. Brilliant! Anyone who finds the idea of ripping their entire CD collection too daunting a task should definitely consider an Appliance. Having said that, users should be aware that “MP3 mirroring” is not just specific to each CD rip – I enabled it for the David Byrne CD and awoke the following morning to find my ENTIRE FLAC library had been mirrored to MP3…whoops. This is a global setting. 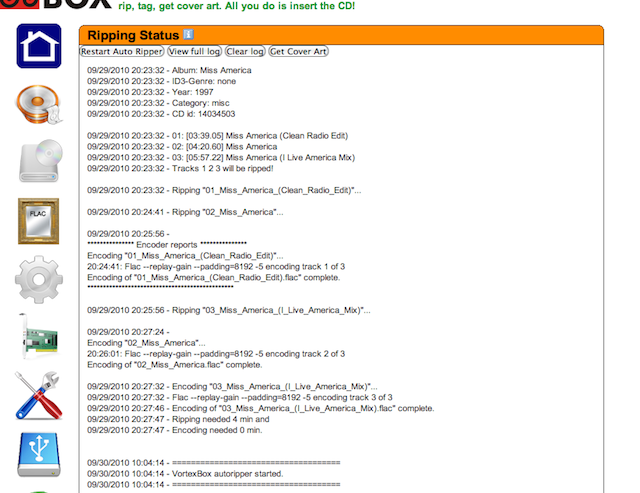 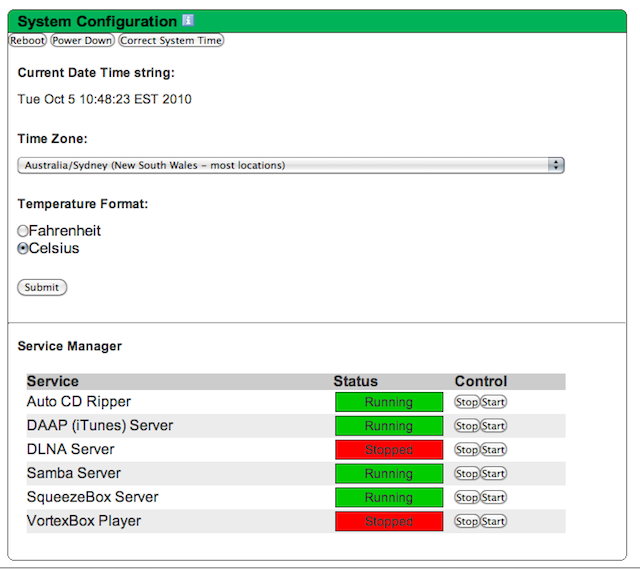 I also made solid use of the Bliss server, a java-based artwork grabber that works its magic silently and without constant user intervention. Yes, it makes mistakes (which can be corrected on a case-by-case basis) but a server daemon that can automatically add artwork to each album has been a long-time coming. That it can simply save a cover.jpg file to the music folder in question is great for those (like myself!) who don’t necessarily want to embed cover art in each MP3/FLAC file. Moreover, by tapping the resources of MusicBrainz and Google, it finds even the most obscure covers. I found cover art for my collection of Fatima Mansions – a long lost Irish band from the 1990s – CD singles without issue.

My experience with iTunes streaming was not so rewarding. The new iTunes 10-compatible DAAP server indexed my music collection without issue and the remote iTunes client (on my MacBook Pro) could see the server just fine (under “Shared”), yet couldn’t connect to it for browse and search functionality. I created a smaller, sub-library for the DAAP server and iTunes streaming worked flawlessly. I suspect the DAAP server isn’t so great for larger music libraries? 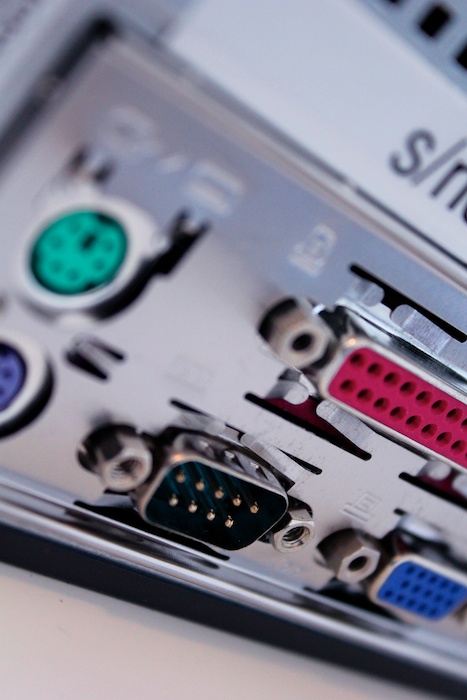 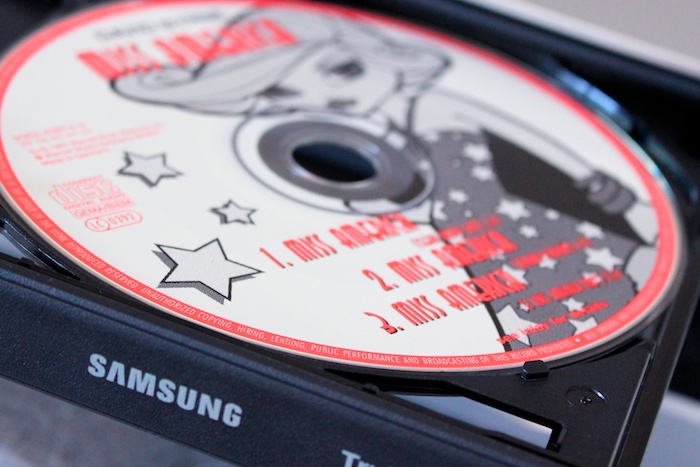 The VortexBox software player has proved to be somewhat enigmatic. It shows up without fail in both the web interface of Squeezebox Server and iPeng, pointing the way to using the Appliance itself as a Squeezebox. However, I don’t think those lusting after decent sound quality would be happy to connect from headphone jack to amplifier. The VortexBox forum came to the rescue again, with one thread providing a list of user-confirmed-as-working USB DACs. I had the excellent HRT Music Streamer II+ to hand, plugged it in to a free USB port and (bingo!) my Appliance was now ready to perform as a bona-fide audiophile player. Is the VortexBox player based on SqueezeSlave, Peter?

This leads me to two minor niggles that negate some of the possibilities of VortexBox Appliance’s permanent place on the Squeezebox subs bench. Firstly, this review VortexBox model isn’t fanless and therefore isn’t silent. The case fan is by no means loud, but there’s I couldn’t tolerate it being close to my listening spaces. I understand you have a fanless model available but I can see no mention of it on the VortexBox Australia website? Please forgive me if my eyesite has failed me. The case fan noise will probably be a deal breaker for only the most anally-retentive streaming audio nutjobs (of which I am one). 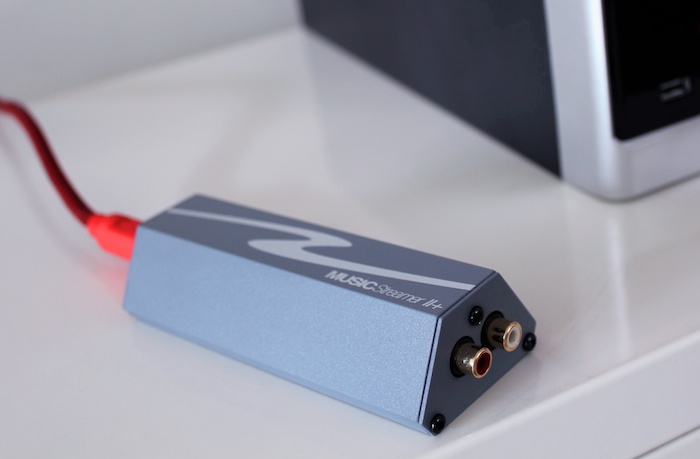 Secondly, the lack of a wifi card means that the Appliance MUST be cable-chained to the router. The end-user installing a wifi card themselves would require a beyond-the-basics understanding of Linux and (undoubtedly) some command line nouse. I cannot fault your reasoning that Gigabit ethernet is required for seamless video streaming, but I can’t be the first person who has successfully run an all-wireless Squeezebox network, including the server for the past few years? The ethernet cable is the fastest way to get the music onto the server, after that a wifi option for audio streaming would be nice. With wifi on board, the Appliance could be plugged into the mains anywhere in the house.

By the way, I didn’t get to test Appliance’s Sonos compatibility (it’s only a checkbox away) as I’m a Squeezebox tragic.
You’re probably wondering why this review is in the form of a letter? It’s because hifi retail IS all about people. Your business-like and attentive approach to my emails bore witness to that edict. I figured my “response” to your excellent product support should reflect not only your – but the whole VortexBox community’s – people-focussed attitude towards selling metal boxes. 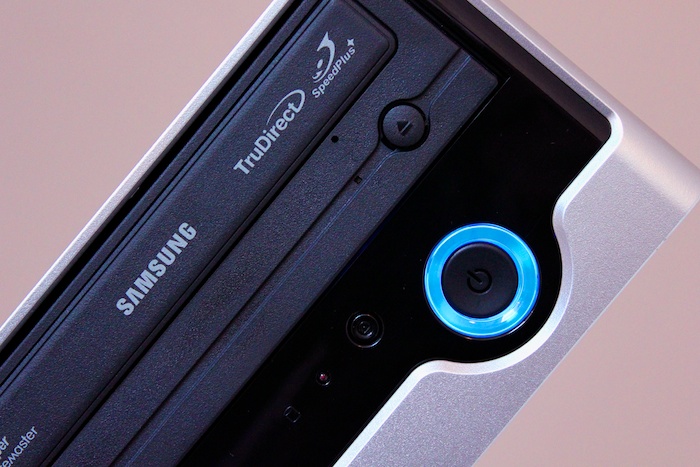 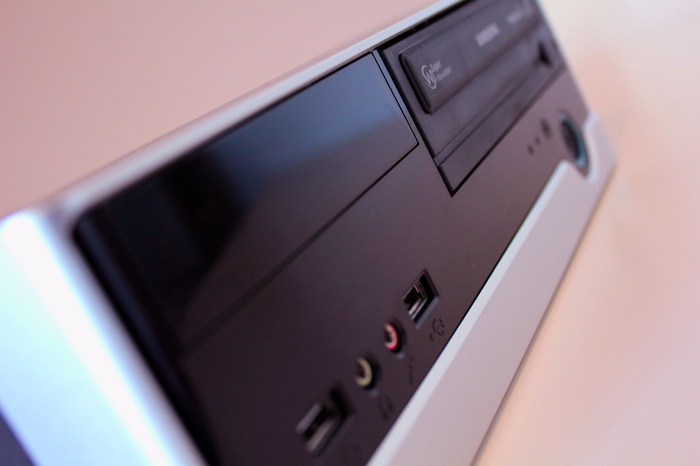 For someone looking to take a tour of the the streaming audio harbour, the VortexBox Appliance should be the first berthing point for media storage, file management and CD ripping. It’s relatively inexpensive – the 1TB model being AU$385 and the 2TB model being AU$465 – and it’s configurable. It doesn’t necessarily rely on some geek building a NAS-specific port of server software – it’s Linux based so anything (within reason) can be installed. It suffers none of the Squeezebox Server treacle lag of many NAS devices.

Most critically of all, the VortexBox local (and international) support is tremendous – a quick forum post or email to you has swiftly and comprehensively resolved each and every one of my questions. How many products can boast that level of support? Answer: very few. As such, I have no hesitation in recommending the VortexBox Appliance to others. 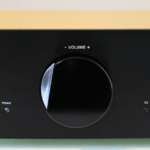 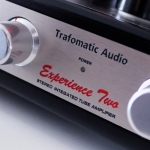