If you had to describe your ideal hi-fi sound, what words would you choose? Let’s say you were limited to three words, what three words would describe your ideal hi-fi sound? Seriously, ponder that simple (but legitimate) question for a moment. Now ask yourself, “Do aesthetics matter?”. Many claim that they don’t, but I’ve seen systems that appear to have been attacked by an army of hammers that I couldn’t live with on a daily basis. Few audiophiles believe that sound is EVERYTHING and aesthetics are irrelevant.

The culmination of no less than fifteen years R&D, the NAKSA 70 is an amplifier module designed by Melbourne-based Hugh Dean (who operates under the banner of Aspen Amplifiers). The NAKSA 70 has seen Hugh Dean take the less-is-more road in striving for the holy grail of tubular organics/liquidity and solid state heft: the module utilises only five transistors per channel, an integrated heat sink and simple attachments for input, output and power. The user must supply his own box and transformer and assemble the amplifier himself.  Say what? You heard me, the purchaser must assemble his own amplifier. Hugh tells me that this could easily be undertaken by a technician in under three hours. I was keen to review a pre-built unit because it is a) Australian-made and b) designed to play well with modern digital sources; the noise floor is -105dBA. I’m not an overtly patriotic fellow but I was more than intrigued by the latter claim. 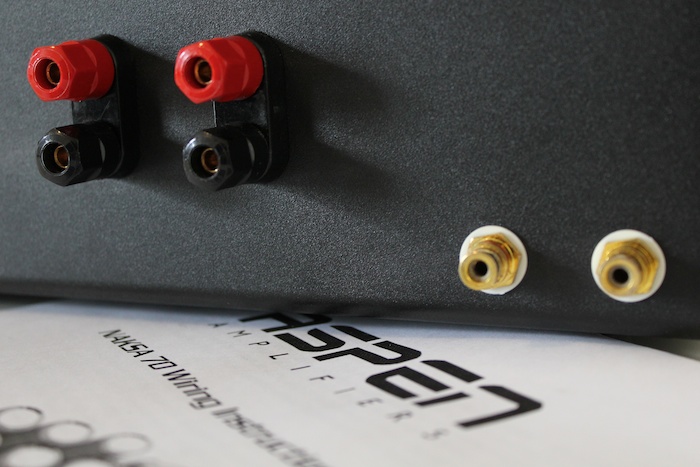 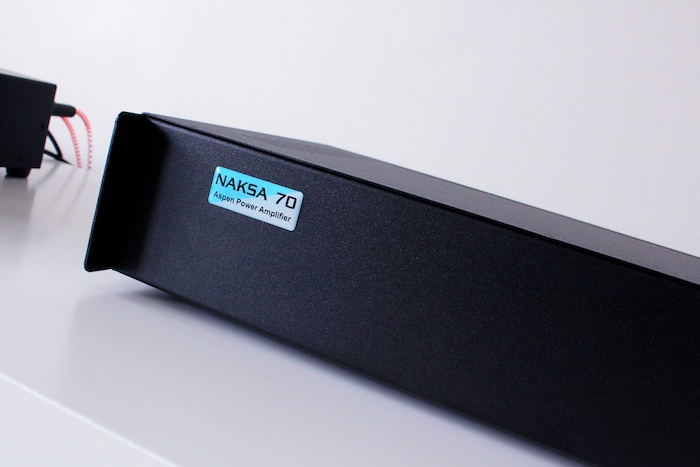 Hugh Dean is a charming fellow who took time to explain that the order of distortion – rather than the sum totalled harmonic distortion – is the key to what humans perceive as “musical”. Put another way, if the order of distortion is predominantly even, measuring THD is a mug’s game. Here was an amplifier designer who proclaimed with ardent fervour that measurements aren’t a reliable indicator of how much pleasure a listener might derive from an amplifier. Very few consumers would measure an amplifier before they bought it, but nearly all of them would make a judgement based upon an audition. The average consumer might peruse the specifications sheet but the decision to buy or not will be made after listening with one’s own ears. An amplifier is only worth buying if the listening pleasure derived exceeds expectations at the price point. Quite an affronting school of thought to those who cling to their charts and graphs.

The NAKSA 70 module retails for AU$950, so a fully-boxed unit could easily be assembled for less than AU$1200. If you chose to spend more dollars on more enclosure bling then great, but a simple black box with an industrial feel – as per my review unit – is sufficient to get you over the line. “The idea behind this amplifier is to provide a highly pleasurable listening experience in these tough economic times”, Hugh told me. “It offers strong bottom end performance, to meet the demand of most music lovers and smaller speaker systems in common use as well as the ability to drive any load including electrostatic speakers.”  Obviously, Hugh is in the business of selling amplifiers but he isn’t a man prone to hyperbole. During our phone conversation, not once did he speak in absolutes about his own product. Not once did he sound self-congratulatory. 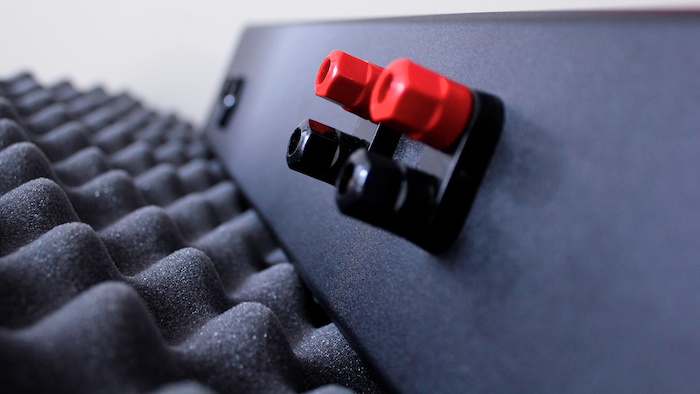 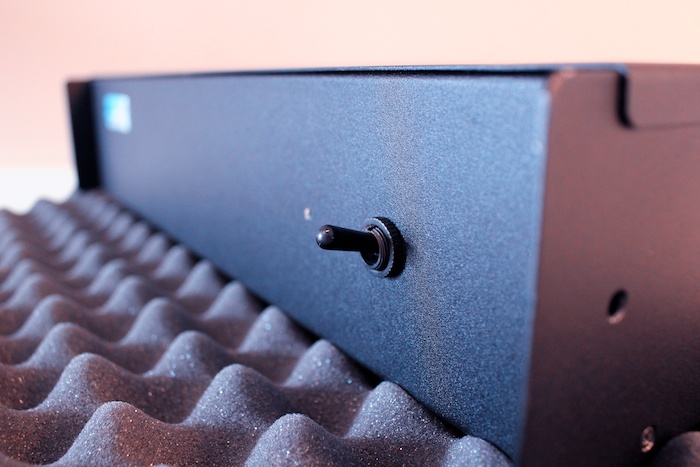 Simple beginnings: I hooked a Squeezebox Touch directly into the NAKSA’s rear and ran through the recent EMI remaster of Morrissey’s Bona Drag….several times.  With the NAKSA 70 attached to a pair of Omega Super 6 XRS, Inoted breathless extension in the upper frequency range with an abundance of transient attack. Switching over to a pair of ATC SCM 11s and the same personality traits were palpable. When compared to the Aaron XX integrated, the NAKSA offered less finesse but more body. Some might refer to this as slam. When the Aaron XX was slipped between the Squeezebox and the NAKSA (as a pre-amp), I heard the best of both worlds: a detailed, widescreen soundstage presented with stability and density. Removing the Aaron and adding the TeraDak Chameleon NOS DAC brought a spoonful of fluidity to Sufjan Stevens Age Of Adz, but I pushed my luck too far with the Wyred For Sound DAC 2. Yes, it’s more detailed than the TeraDak, but it talks a different language to the NAKSA 70 and failed to synergise as tidily.

Perhaps it’s childish, but when initial listening sessions reveal a product to be capable of largesse, I like to dig out more complex reference tunes. Pushing through Built To Spill’s fast and furious “Pat” sees the NAKSA unravel the tune with grace and easy. Lesser able amps tie themselves up in knots and make a mess of the upper registers – Doug Martsch’s guitar-vocal interweave can sound edgy. With the NAKSA/ATC running hand-in-hand, the world comprised tulips and blue sky – a few months earlier with a Bryston integrated, “Pat” was aural shards of glass. Even when mainlining the Squeezebox Touch directly into the veins of the NAKSA 70, the pace and timing of Richard Thompson’s new band was sufficiently enjoyable that I didn’t worry that I was losing resolution from the Squeezebox’s in-bult volume attenuation. Musicality was all present and correct. 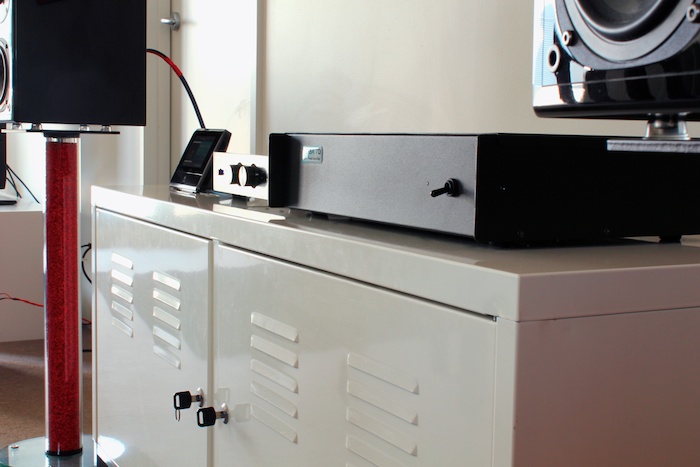 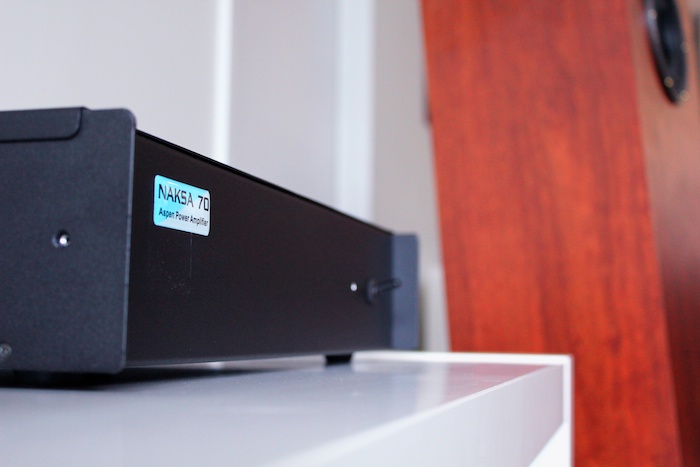 With the ATCs still on the front line, I compared the NAKSA 70 to the JLTi EL34 power amp (~AU$1300). The NAKSA acted out a more delicate take on Richard Thompson’s Dream Attic, whilst its tubular cousin seemed to be powered by a larger engine room. The JLTi had the thicker midrange. As was to be expected, bass was tighter on the NAKSA. When listening to The National’s High Violet, I wrote in my notes, “Just sufficient control, but not vice like so that it sounded rigid”. I think I was trying to say that the NAKSA 70 allows music room to breathe, to ebb and flow.

Two weeks into the audition and the NAKSA’s system configuration was switched and its room changed: into the side-boundary-less upper-east side of my lounge and with a Maverick on DAC/Pre duties. This was the first time I’d disengaged the “direct” switch on the Maverick and fully-utilised its passive pre-amp amenities. What a simple and cheap shortcut to achieving a good sound. The Maverick’s bottom end is still the wrong side of wobbly, but tempered considerably by the NAKSA 70’s unflinching bass control. The power amplifier made short work of the Usher S-520s, which – with certain recordings – elevate brightness to shrillness. I’ve never found the S-520s to be the second coming that many have proclaimed. I recently witnessed one retailer claim they were superior to ProAc Super Tablettes – utter poppycock! Nearly all hi-fi products have weaknesses – the Usher S-520 IS a very good loudspeaker, but it’s too bright, too insistent for my tastes. The NAKSA 70 doesn’t remedy the situation directly. Like a true politician, it deftly sidesteps the question and responds with a sound so utterly engaging that one’s awareness of the aforementioned brightness fades to black. Nick Cave’s cover of “Let It Be” remains robust and majestic and imbued with the near-cliched Cave portent. I heard the song and less so the system acting out the reproduction. The Ushers remained edgy with searing guitars but I cared less than when powered by other amplifiers. 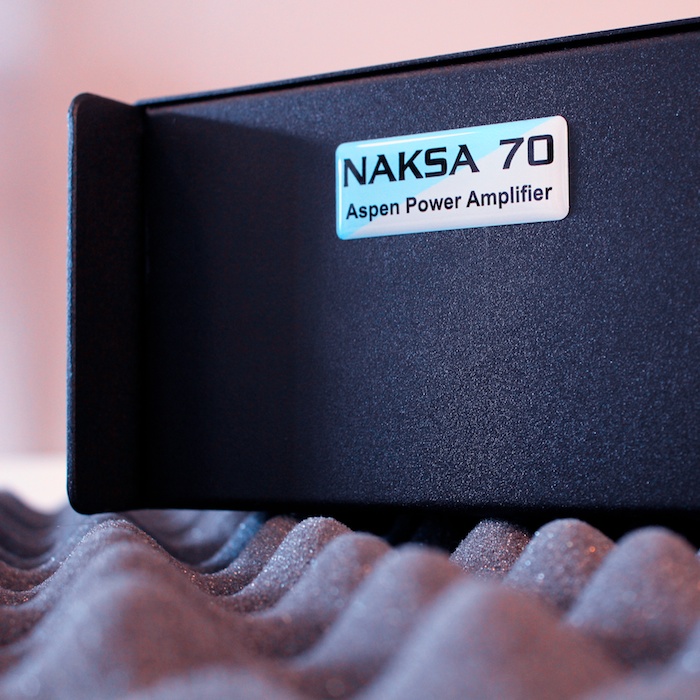 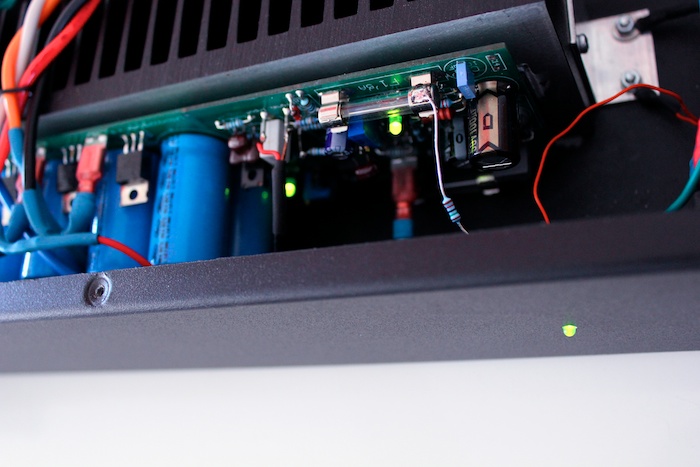 The NAKSA/Usher combination offers a shimmering combination for electronic music. Moritz Von Oswald Trio’s bleep-and-dub electro bounces with a cheerfulness that goes against the grain of the some of the album’s more sombre passages. Like a fellow mourner being a little too cheerful at a wake, the NAKSA 70 exudes an optimism and a promptitude. A reminder that successful music reproduction is more than getting the bass tight (which it is, even in the context of the Maverick’s tube output stage) or flaunting a liquid midrange (which it also does). Substituting the NAKSA 70 for the Virtue Sensation M901 (AU$1200) gave rise to a cooler, milkier top-end and diminished slam but no loss in detail or audible gratification.
Without being perfect, the NAKSA 70 is an amplifier that does almost nothing wrong – certainly nothing noticeable with the loudspeakers at my disposal, all of which retail for less than $3000. The industrial aesthetics of my review box troubled me more than any sonic oddities. It is very easy to listen to. More acutely, it transcends the musicality vs accuracy debate by being more-than-competent at both. It has the softness of a single-ended tube amp with the bass control and overall authority of a serious solid state. It errs on the side of formality without sounding cold or distant and it has sufficient slam to quench the most severe of macro-dynamic thirsts.

Undoubtedly, there are better-sounding amplifiers on the market; but how much would one have to spend to improve on the NAKSA 70? Several grand? Is that extra cash worth it? Possibly, but – for the most cash-conscious audiophiles chasing budget Davids to slay $5000 Goliaths – why bother? More important than a slingshot to the eye of the heavy hitters is that the NAKSA 70 doesn’t leave you wanting more. It will take a special kind of high-end audiophile not to misinterpret the NAKSA 70’s musical engagement as “I was wrong about my $5000 amplifier choice”. In broader terms, pragmatism is only achieved by separating amplifier ownership and ego. There is sufficient detail and foot-tapping pleasure to keep the upgrade bugs at bay – and that is no minor achievement. Those who already own multi-thousand dollar amplification set-ups might struggle to be persuaded by such words, but those coming up from below would be well advised to look deep into the NAKSA’s eyes. There is no abyss and it won’t stare back. 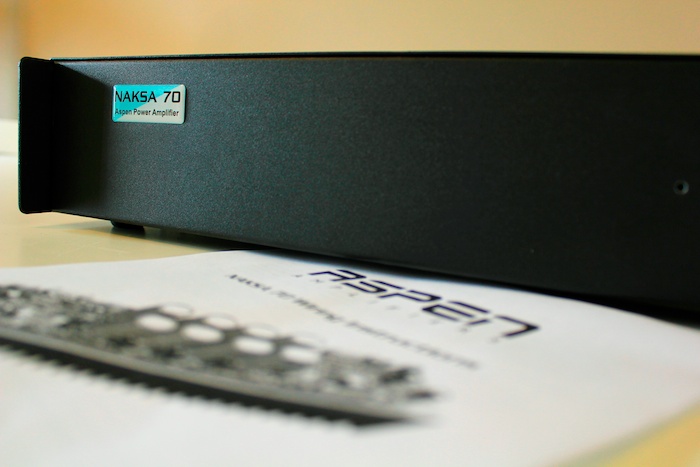 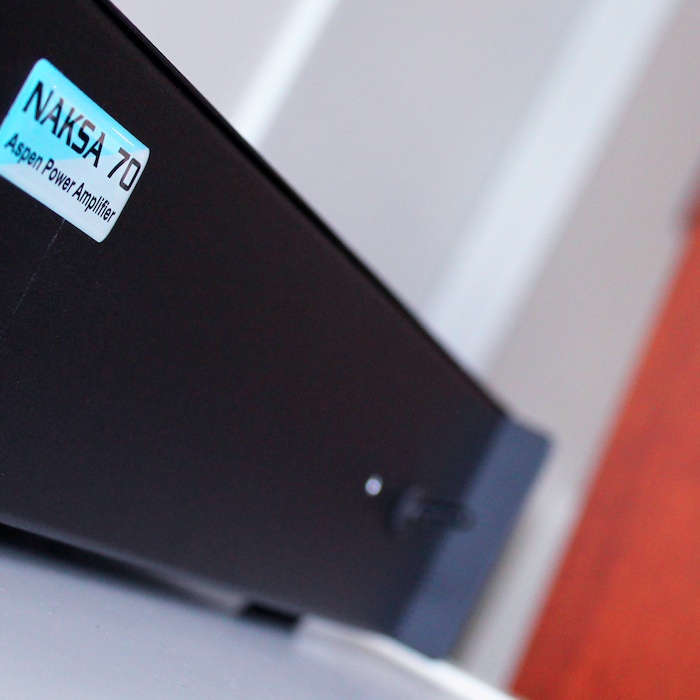 The NAKSA 70 is a a wake up call to those who would pore over measurements. This audio game isn’t just about jumping the triumvirate hurdles of tight bass, open mids and sweet treble. Is the listener engaged? Is the sound an enjoyable one? It’s about three words: dynamics, pace and – above all else – (musical) involvement.

The NAKSA 70 doesn’t just make sounds, it replicates instruments with all their attendant subtle intonations. It adds adjectives to the (standard) phonic nouns. The NAKSA 70 hoists us over the wall into the orchard – we don’t just smell the apples, we can see them. Hugh Dean’s audio meal contains no stodge and it won’t leave you feeling bloated. It is a healthy and invigorating does of vitamin C for those existing on an erstwhile diet of meat and potatoes. And it’s stupidly cheap. If this were a finished retail product, it would be one of the biggest bargains on the Australian hifi market today – a five star sound, no question. Instead, it’s time to call your DIY-capable mate, bribe him with whatever you have to get this module into a working amplifier box; preferably a prettier one than my review unit. Given the pitiful financial outlay for such a stellar sound, it’d be close to impossible to end up feeling disappointed with the NAKSA 70. An Australian made power amplifier in kit form that offers a high-end meal at a hot dog stand price – a stunning achievement, Hugh.