Hifi review publication is much like punchline delivery in stand-up comedy: timing is EVERYTHING.

The Sensation M901’s development process is an epic tale that has seen this product take nearly two years to come to market. That – and limited production runs – are the predominant reasons why I found myself so eager to review the bigger Virtue Tripath amplifier so swiftly after the ONE.2.  However, review two items from the same manufacturer close together and less charitable folk accuse the reviewer of shilling – I suspect such detractors wouldn’t be completely satisfied of a reviewer’s impartiality unless they directly witnessed him strapped to a chair and injected with truth serum?!

Take the opposite tack and review two items from the same manufacturer months apart and one risks getting bombarded with requests on how the two compare side-by-side. A far more enjoyable scenario, for sure, but still not ideal.  I have had both the (previously reviewed) Virtue ONE.2 and the Virtue Sensation in my primary listening room for the past couple of months and have seen too many forum-based requests for a comparison not to immediately move forward with a Sensation review.

Allow me me to be the first to pop that comparative bubble right from the off: when they both took turns at pushing signals to a pair of 93db Omega Super 6 ($2611), the Sensation M901 left the ONE.2 for dust. More punch, resolution and dynamics. A night and day difference. Both share the same Virtue “house” sound, but the ONE.2 sounded like over-diluted concentrate next to the Sensation’s vitamin-rich freshly-squeezed. 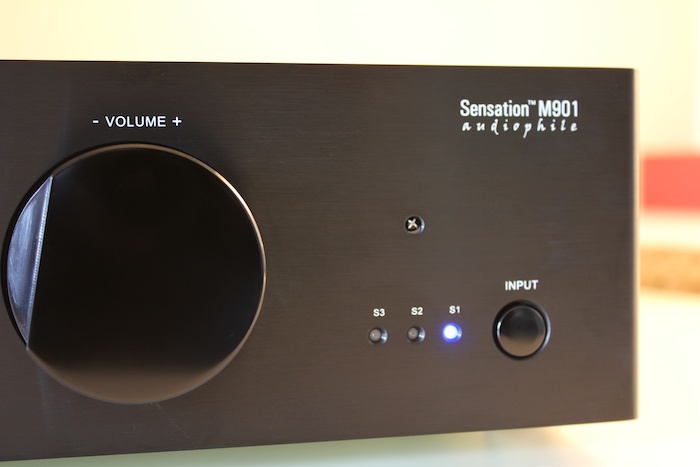 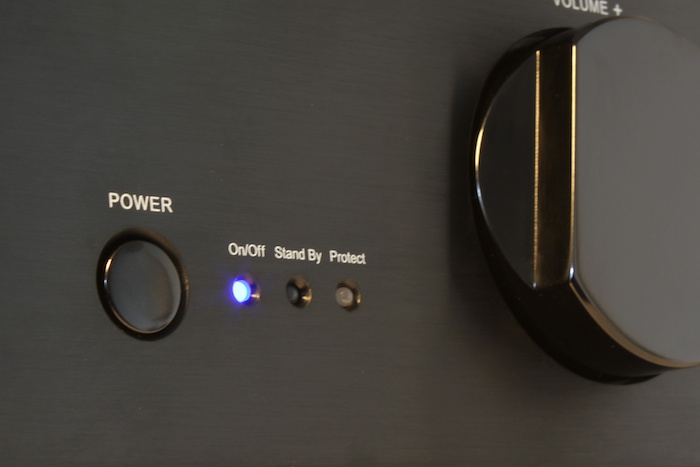 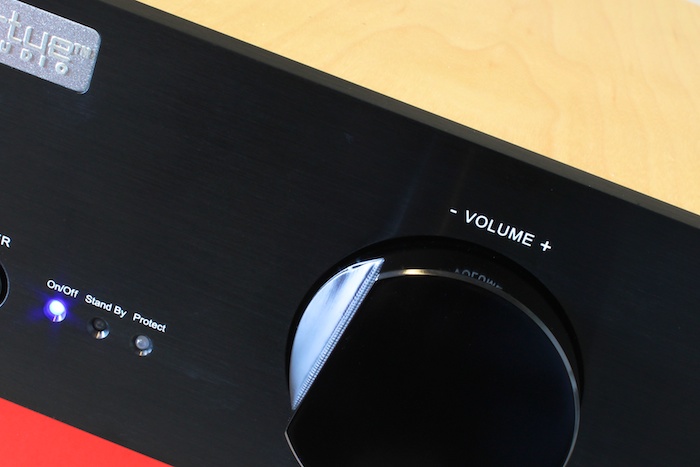 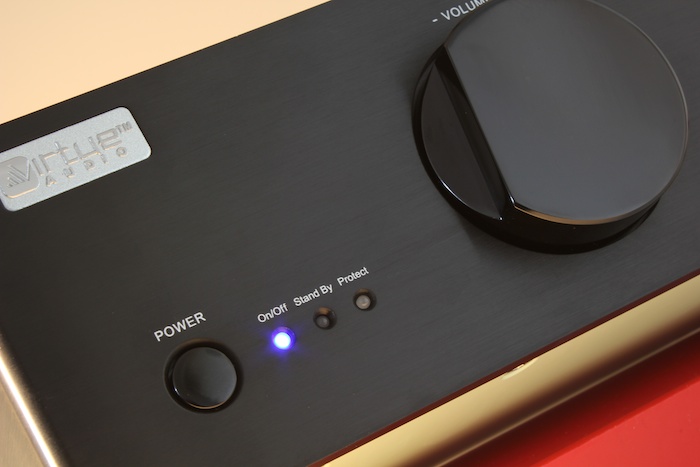 Your extra dollar-drop also buys you three inputs (the ONE.2 has only one), juicier PSU upgrade potential and a remote control. The stock remote is a stinker, despite being consistent with Seth’s get-you-into-the-game-for-as-little-as-possible-and-upgrade-later philosophy. Another $100 buys you the much, much nicer aluminium remote control. The faceplate, sides and volume pot (which has a lovely glide) are all customisable at time of order. Virtue offer a dizzying array of options for each. For some (myself included) this could lead to mental grid-lock at purchase time. My review unit was a conservative all black and sides affair with an Ikea-like maple top panel. (If I were buying, I’d probably opt for a transparent piece of perspex to expose the fascinating guts of the machine; more to show off to my tech-head mates). Strapped to the bulging Sensation-feature wagon are stereo pre-outs, a sub out with an 80hz internally-switched high-pass filter.

Prior to this review, I exchanged several emails with Virtue’s team captain Seth Krinsky. We conversed not only about the Sensation and the ONE.2, but also about some of the broader issues relating to Virtue Audio:

JD: Tell us about the Virtue product development process in terms of geography: where are they designed? SK: 80% of design is done in the USA. Things like remote control and LCD are done in Asia.

JD: Where are they made? 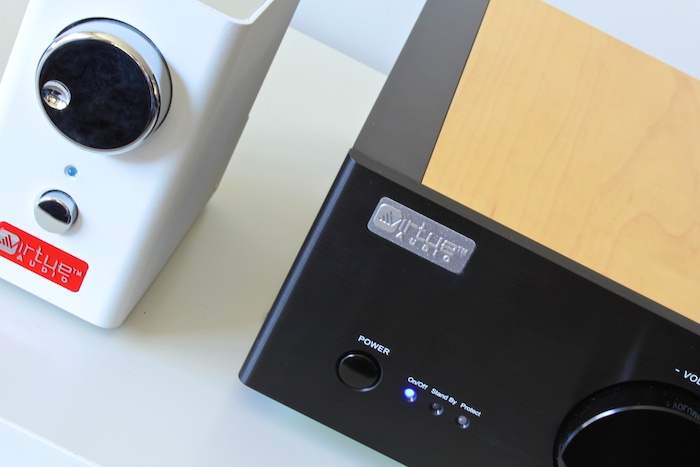 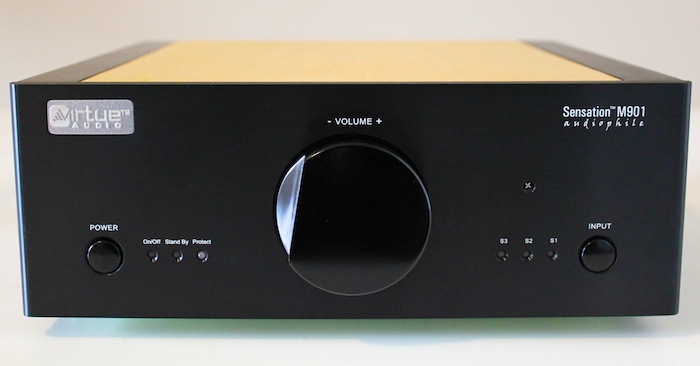 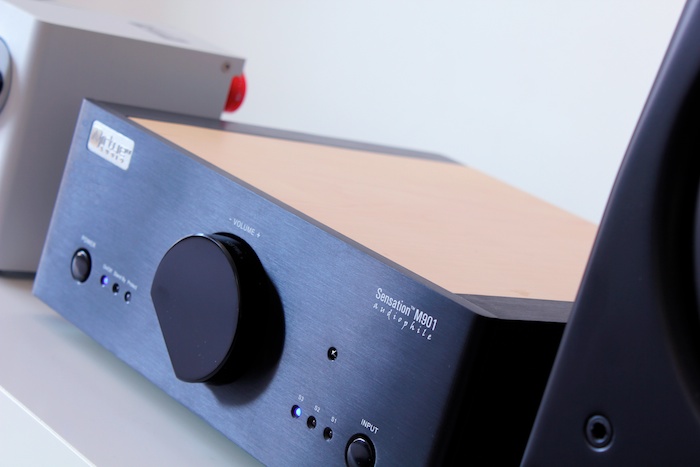 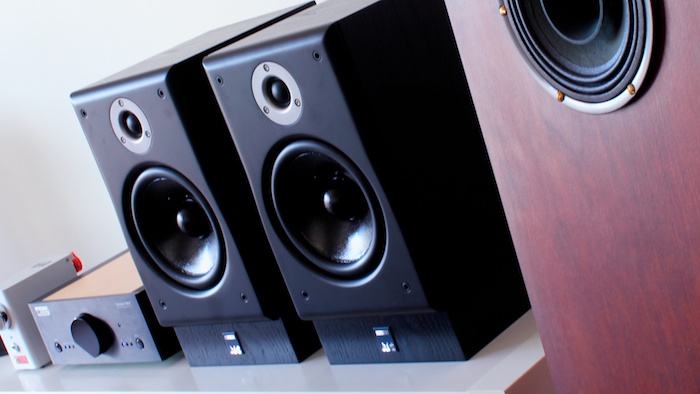 JD: How does the geography inform the design and/or manufacturing decisions? SK: Drives up costs! Spent $40,000 on DHL for development and parts TO asia first go-around.  What a mess.

JD:  It well documented that you had quite a challenging time bringing the Sensation amplifier to market. What did you learn from that? How has it informed your decisions to expand or contract the Virtue product range.

SK: Contract. I learned that product development is HARD.

JD: You make limited runs of many of your products. What happens when demand outstrips supply?

SK: We sell out. Every run is a limited production and we make no promises to remake products.

JD:  Tripath-based amplifiers come under a bit of fire from some quarters for not being “proper” hifi. Do you find yourself having to defend your decision to develop T-amps? If so, what do you say to such antagonists?

JD: Your Piano M1 CD player has been favourably received. Do you have any plans to develop a standalone DAC? 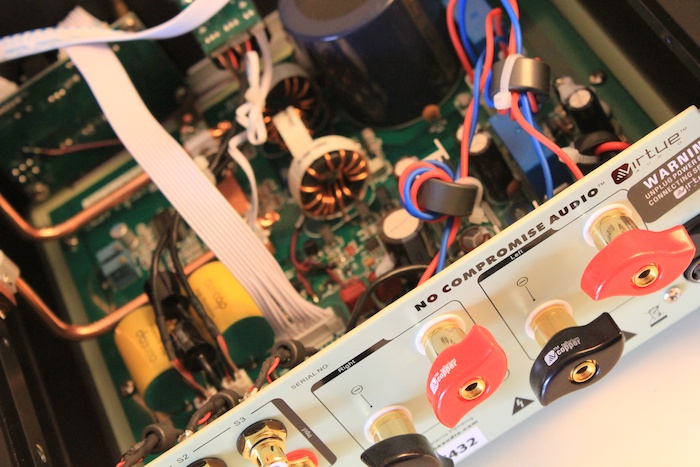 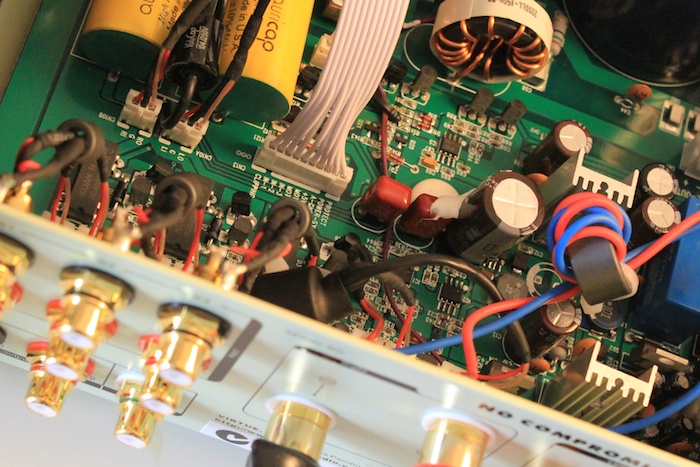 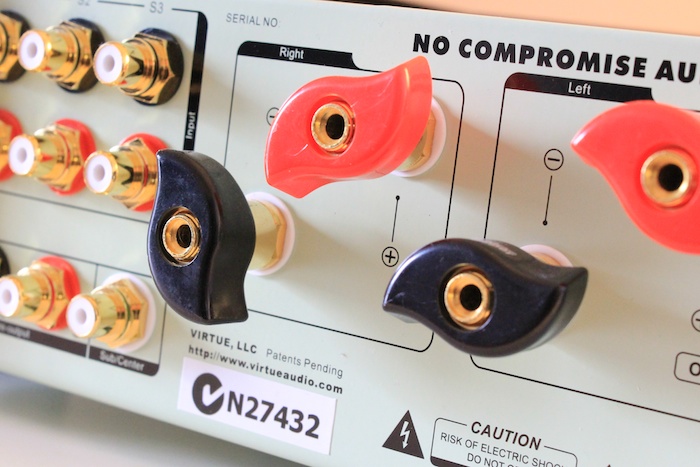 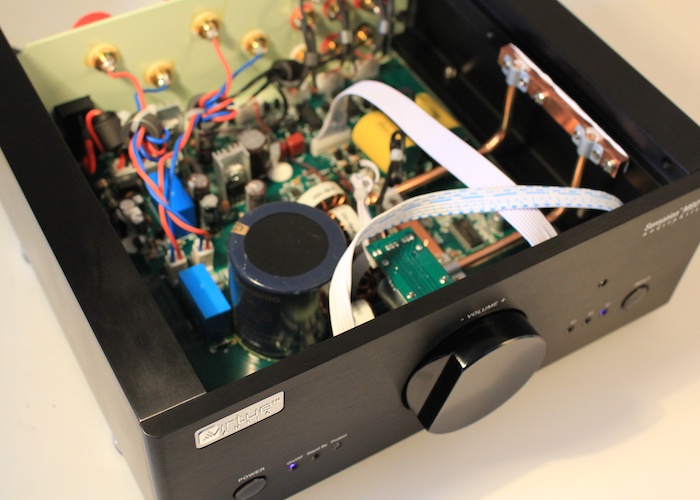 Back on the review freeway and initial impressions showed the Sensation to speak with taut tongue. An orator with judicious word choices could lead some to criticise its diminished romance and matter-of-fact-when compared with – as I did – an 8wpc 300B SET. It would be unrealistic to expect anything else. The Sensation’s strengths are its abilities to directly address common complaints of Class D amplifiers: recessed midrange. I heard no such thing from this meatier Virtue when calling upon Roxy Music’s For Your Pleasure for a much needed revisit. Even the 30v/130w switching PSU had the Omegas doing the strand! I heard superb levels of inner detail and spaciousness which erred toward the mathematical when passages became complex. This is a minor criticism for which – to be honest – I am reaching.

Ferry’s vocal is not buried ‘neath the aforementioned dense mixdown on “Fine Edition Of You”, even when switching out the Omegas for a pair of 87db PMC DB1is ($2300). Doing so rules the Trafomatic Experience Two’s measly eight watts out of the amplification picture. Sure, it functions, but the 300Bs can’t muster the room drive of the Sensation. Bass control is also better on the Tripath side of the border. The Sensation deftly taps into the tough-to-ignore dynamics of the PMC standmounts. The (now-dated) ambient-trance sound of L.S.G.’s Rendezvous In Outer Space comes across with the expected intensity and speed. Bass was some of the tightest I’ve heard at this price point. Nice.

Upping the speaker sensitivity ante to a pair of ATC SCM 11 (85db) and the good ship Sensation runs aground. The ATCs are some of the toughest standmounts in the business to get going and for anything similarly insensitive you will need to upgrade the power supply on the Sensation M901 to a JT 30v/300w Dynamic Power Supply ($275) – this lifts the watts per channel from 55 to a beefy 87. In my listening tests, only then did the Virtue Sensation M901 drive the ATCs into the middle of next week. Not only that, but the synergy between the two was a particularly pleasing one. I’ve been playing R.E.M.’s Green a lot recently. It’s a pallid 1980s master that sounds thin and reedy on many systems. Not so with the Sensation/ATC pairing. Stipe’s vocal is thick with energetic emotion and songs like “Get Up” and “Stand” possess plenty of playful punch. Nice (again). 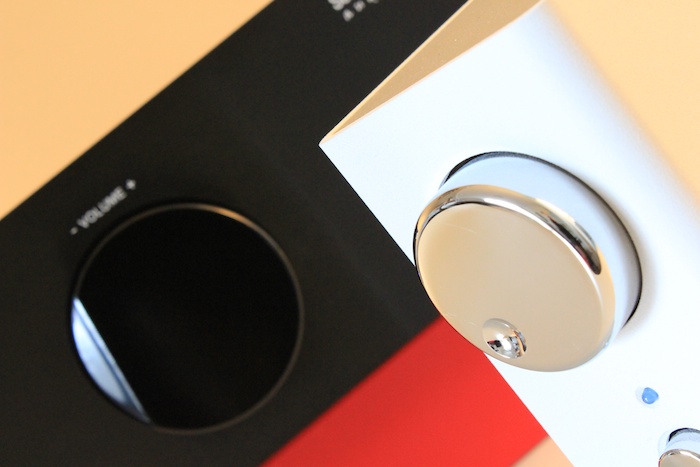 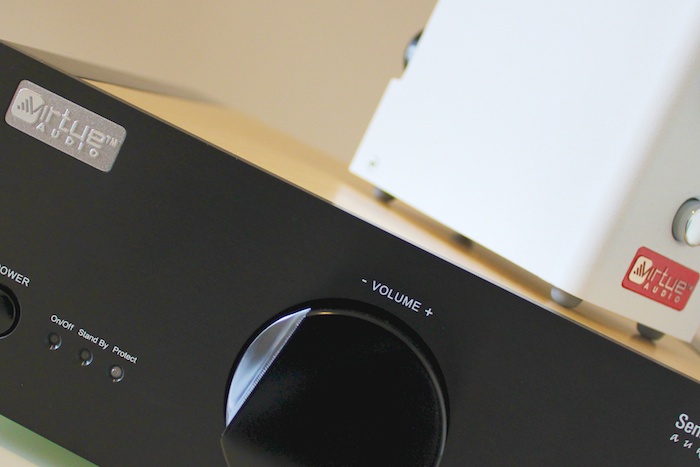 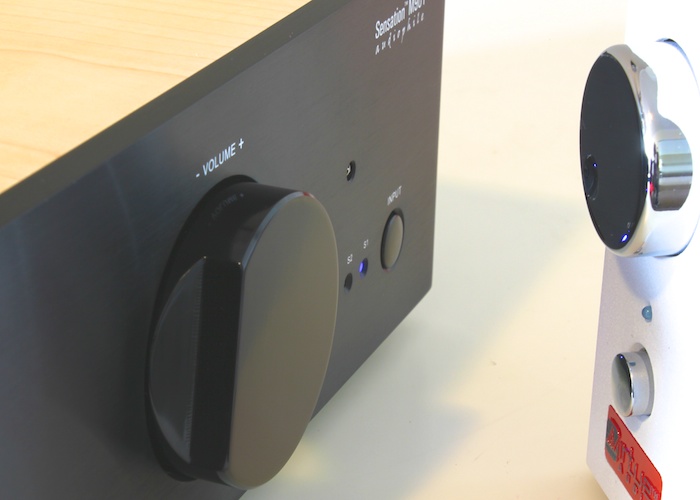 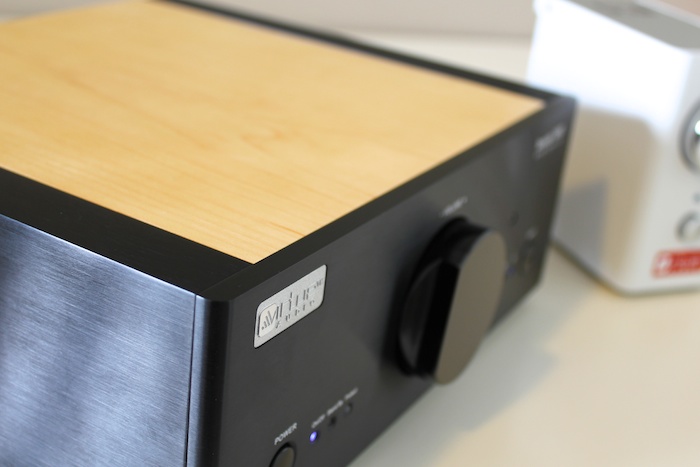 The Sensation M901 is an ambidextrous beast.  It is an amplifier that won’t make a mess of single driver speakers and will happily drive the most demanding of standmounts (with the JT linear PSU for tougher loads). Not many solid state amplifiers at the sub-$2000 price point could lay claim to being capable of both. I recall running from the room in horror when hooking a Naim Nait 5i up to a pair of Loth-X Ambience for shits and giggles. The key to the Sensation’s solid synergy with the Omegas can perhaps be attributed to its smooth treble. It’s detailed but never over-bearing or – to put it more crudely – “scratchy”. Like it’s baby brother the ONE.2, this amplifier won’t annoy or fatigue the listener. British Sea Power’s sophomore effort Open Season contains an abundance of upper-midrange guitar squall – the Sensation lassos this album from the first note so that it never strays into brightness or hardness, even when played loud. The lead hook of “Larsen B” is sufficiently exhilarating and never Nurofen-ready. Moreover, I couldn’t detect any loss of detail or spaciousness when SPLs were pushed to non-neighbourly levels.

The Virtue Sensation M901 exhibits a clean and musical signature that never exposes its muscles as artificial or bright. It sounds “pleasing”, “measured” and – most of all – enjoyable.  The Sensation takes the Virtue house sound up numerous performance notches from the ONE.2.  I’d probably never use the ONE.2 as my main room amplifier and yet I see no reason NOT to with the Sensation. Its visual styling demands that it be put on display (and not just plonked on a desk).

Let’s do some maths: the 30v/130w PSU is an additional AU$169 atop the stock ONE.2’s AU$499; this sees the prospective buyer nudging AU$700 without – in this reviewer’s opinion – getting close to the performance of the AU$1200 Sensation M901. Once you factor in the additional features and customisable aesthetics you begin to realise what an audiophile bargain lies at the heart of the Sensation M901. Its mature sonic salutations unfold slowly during a lengthy burn-in process. Prospective buyers should be alerted (but not alarmed) to audition a unit with a couple of hundred of hours on it and then spend some time with it – you won’t be wowed immediately. Sure, this means more work for the retailer/distributor but the perceptible, long-term rewards for the discerning audiophile consumer will undoubtedly be numerous. In less verbose terms, the Virtue Sensation M901 is a versatile, detailed, toe-tapping-audio-experience of an amplifier with few challengers at this price point. 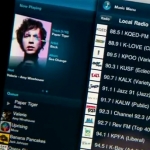 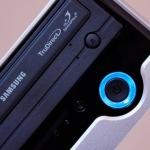