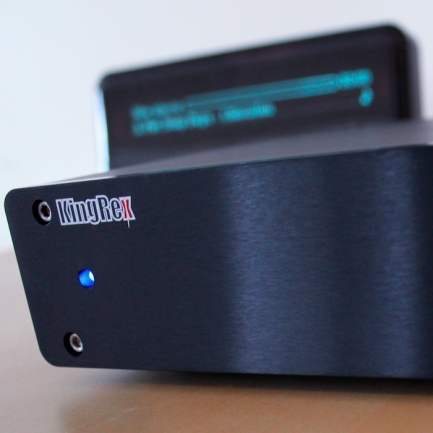 The jury is still out on organic food. Scientists admit that it contains a greater number of antioxidants relative to non-organic food – as well as higher possibly levels of iron and zinc found in organically farmed milk. But no scientific study has yet proven how organic are better for you. Depending on who you believe, my previous sentence is either a lie or truth. And there’s the rub: organic food remains a matter of belief (and wallet size).

Speakers cables and interconnects are the organic food of the hifi world. The Groundhog Day-esque flame wars that take place on any given hifi forum are the very reason that cables and interconnects are not reviewed on this website: observe as Listener A proclaims the second audio coming having dropped $800 on a new pair of speaker cables, then recoil as Listener B abruptly tells Listener A that he’s a fool and he would’ve achieved similar loudpspeaker performance from chicken wire. Another internet dogfight ensues. 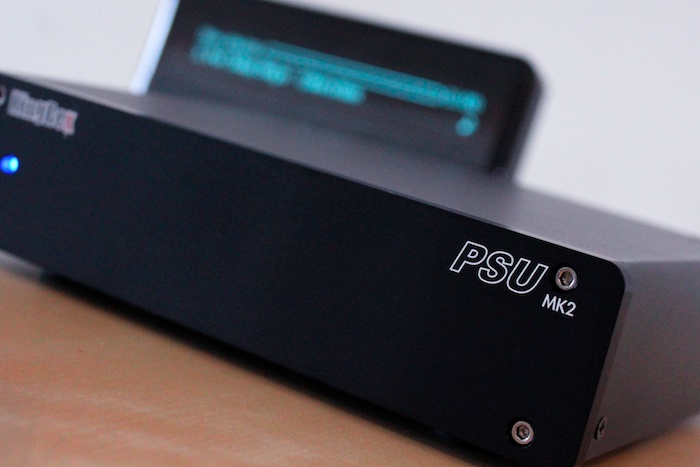 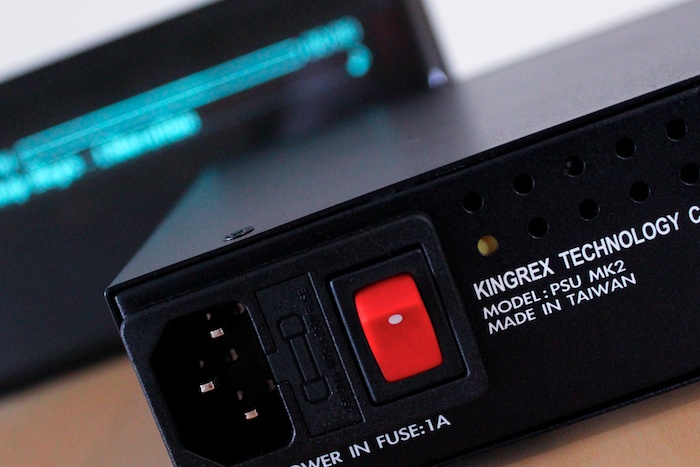 Taiwanese company Kingrex have adapted their PSU platform to meet the demands of the more discerning Squeezebox listener. The Kingrex 5V PSU retails for $379. Theoretically, this linear power supply is more organic than the pesticide-infused stock switching PSU that ships with the Squeezebox. The physics is enticing and it almost certainly holds true for amplifier design: better power supply = better sound.The Kingrex PSU’s build is neat and tidy and re-affirms the belief that Taiwanese products appear to be manufactured to a higher standard than many similar Chinese products. The casework is a solid aluminium box with power switch, umbilical chord socket and mains power socket tidily arranged on the rear. Coem Audio’s website tells us that contained within is “a 48VA toroidal transformer coupled to a full (sic) fledged regulatory circuit with eight audio grade NCC aluminium electrolytic capacitors”. My test unit exhibited a slight hum when powered on, but it could not be heard from the listening position.

A semi-scientific review process is called for here, so let us begin at the beginning with a hypothesis: The Kingrex PSU improves the sound quality of the Logitech Squeezebox Classic. 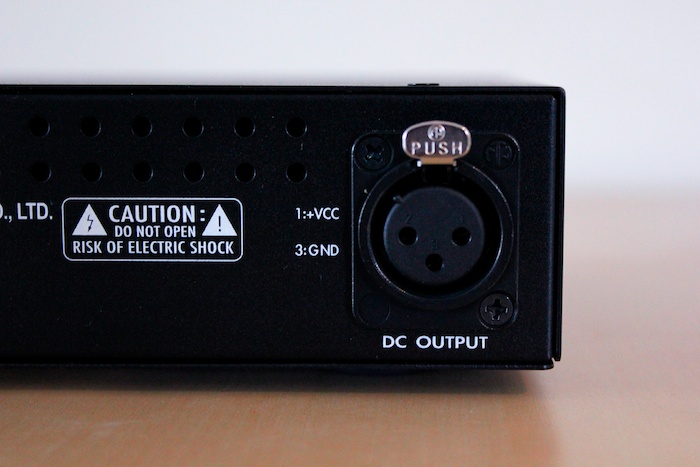 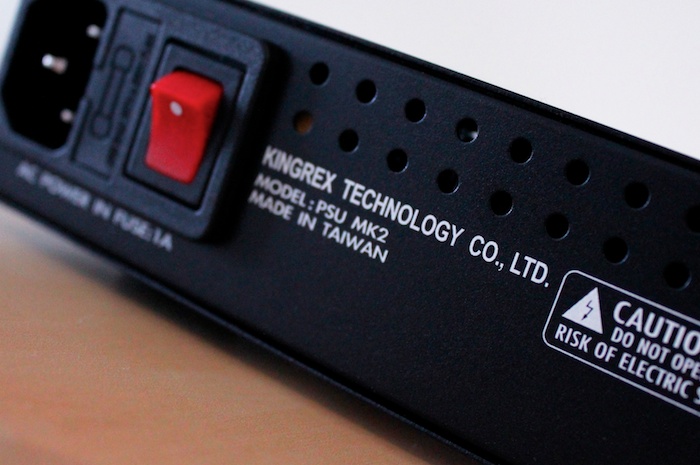 Method: Utilising the internal DAC of each, two Squeezebox Classics were hooked up to neighbouring RCA inputs on an Aaron XX amplifier using the same brand/model of interconnect (Chord Cobra), one powered by the standard SPSU and the other by the Kingrex PSU. Squeezebox A’s audio was synchronised with that of Squeezebox B via the server software. Loudspeakers used were a pair of ProAc 1SC.The music flowed for a couple of days:  Tom Waits, Roxy Music, The House Of Love, Johnny Cash, Aphex Twin, Luke Slater, Suede, Bob Dylan.  At any time, I was able to switch between the Squeezeboxen without having to unplug-plug a differing PSU. Sometimes I would sit there, frantically A/B-ing in the hope of outing the switching power supply as the inferior unit using the element of surprise. No dice. Only prolonged listening sessions, choosing organic or non-organic at random intervals yielded (barely) cut-and-dried results.

Results: So uncertain was I of these results that I switched speakers to a pair of PMC DB1i and listened for a further couple of days to confirm the ProAcs version of events to be “true”.

To what sonic disparities did I bare witness?

Marginally less prominent upper-mids with the Kingrex were also noted. However, none of these differences were dramatic and frequently I had to strain to hear them. In a blind test, I’d probably be unable to discern the two, save for the “fizzy” background of the switching unit on quieter tracks. I certainly wouldn’t be prepared to etch these results into stone tablets.

The digital domain was also tested – would a linear PSU make a difference? With the analogue connections to the amplifier still in tact, each Squeezebox was also connected to a Teradak Chameleon, one via optical, the other coaxial (if only there were two of either!). Extended A/B listening then resumed: Nick Cave & The Bad Seeds, Robert Hood, John Martyn, Cocteau Twins and Pet Shop Boys. 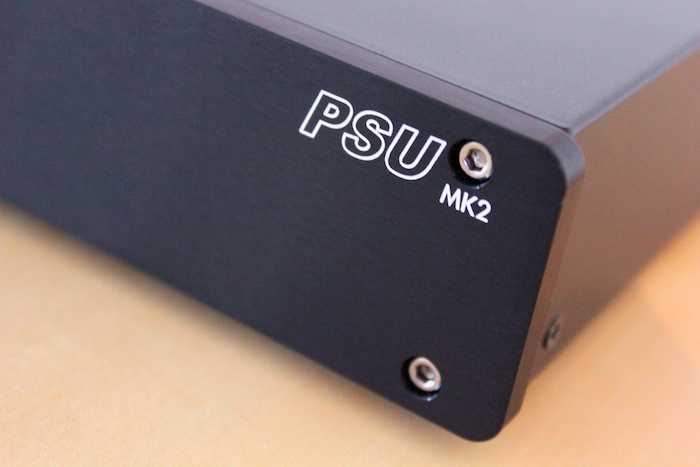 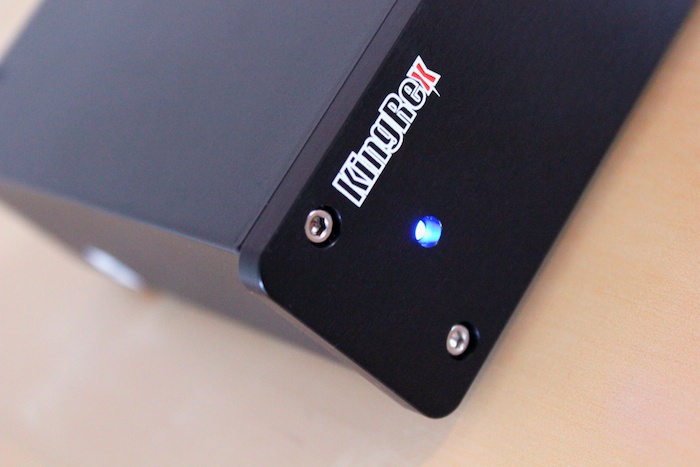 If you were hoping for a revelation, a twist in the story-so-far to have you warming up your credit card at this juncture, let me be the first to pop that bubble! I could hear not a soupcon of audible difference. The coaxial and optical connections were exchanged between Squeezeboxen and…and…again, nothing, nada, zilch. What about a different DAC? The Heed Dactilus DAC showed me more of the same: no audible difference could be discerned between a switching-powered Squeezebox and a linear-powered Squeezebox in the digital domain.

For the control obsessives among you, the difference between an ‘analogue’ Squeezebox and an ‘externally DACd’ Squeezebox was confirmed as “noticeable”.Conclusion: the Kingrex power supply improves sound quality only VERY SLIGHTLY when the Squeezebox’s analogue outputs converse directly with the amplifier. No such improvements can be heard when an external DAC is brought in as an intermediary. We accept our hypothesis (but only just!).

To my mind, the Kingrex power supply is part upgrade, part belief. $379 is not an insignificant donation to the Church of Diminished Audiophile Doubt. As such, it might only appeal to those that have already signed on for an external DAC and are looking to do everything possible to know (believe!) that they are extracting the best sound from their music streaming device. Maybe a significantly more revealing (read: expensive) system might unearth improvements from this linear PSU that I have yet to hear – I’ll leave that discussion to forums and their flamers – but surely the Logitech Squeezebox is not the transport of choice for those with $10k+ systems? The fire-extinguisher at hand is to remember that this review (like all reviews) is a personal opinion. I tested with a range of equipment and am satisfied that what I heard was “true”. Your mile-age may indeed vary.

If you’re seeking to take your Squeezebox on a journey from mid-fi to hi-fi, your next $400 might be better spent on a external DAC (upgrade). There are plenty to choose from at this price point that give a significant lift to the Squeezebox’s performance.  However, if you simply MUST juice the very last from the audio orange then the Kingrex PSU should also be on your grocery list. You’ll find it in the aisle marked “Organic Produce”. 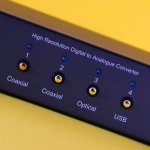 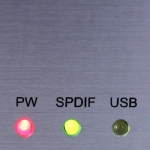